VATICAN CITY – The Vatican is ready to facilitate negotiations between Russia and Ukraine, said Cardinal Pietro Parolin, Vatican Secretary of State. “The only reasonable and constructive way to settle differences is through dialogue, as Pope Francis never tires of repeating,” he said. “The Holy See, which in recent years has followed the events in Ukraine constantly, discreetly and with great attention, offering its willingness to facilitate dialogue with Russia, is always ready to help the parties to resume that path,” said the cardinal. In a joint interview with four Italian newspapers on Feb. 28, Cardinal Parolin said, “Although what we feared and hoped would not happen has happened – the war unleashed by Russia against Ukraine – I am convinced that there is always room for negotiation. It is never too late!” He reiterated the same appeal he said Pope Francis made during his visit to the Russian ambassador to the Holy See on Feb. 25, “stop the fighting and return to negotiations. First and foremost, the military attack, the tragic consequences of which we have all already witnessed, must be stopped immediately,” the cardinal said.

WASHINGTON (CNS) – As war broke out in Europe on Feb. 24 with Russia’s early morning attacks on various parts of Ukraine, Catholics in the U.S. joined Pope Francis in prayers for the people of the East European nation and for peace. “We join @Pontifex in calling on all people of goodwill to pray for the people of #Ukraine and for an end to war,” said the U.S. Conference of Catholic Bishops in a tweet, hours after Russia launched rocket attacks into Ukraine and followed the aggression with a mobilization of troops and tanks into Ukrainian territory. News reports showed bombarded apartment buildings and towns and abandoned cities. Some reported at least 40 casualties, others said they numbered in the hundreds early Feb. 24. The only thing for certain, said NATO Secretary-General Jens Stoltenberg, is that “peace in our continent has been shattered.” Coadjutor Bishop Louis Tylka of Peoria, Illinois, like many in the U.S., seemed to be ending Feb. 23 with news of the initial attacks on Ukraine. “Friends, as we go to bed in central Illinois tonight, the people in Ukraine awake to war,” Bishop Tylka tweeted around 11:30 p.m. (CST). “Let us pray for peace! Let us pray for an end to war! Let us pray that conflict can be resolved by dialogue – not violence! Lord we pray – bring peace to our troubled world.”

VATICAN CITY (CNS) – As Russia continued its assault on Ukraine and Russian troops pressed toward the capital, Kyiv, Pope Francis left the Vatican on Feb. 25 to pay a visit to the Russian ambassador to the Holy See. The pope went to the embassy, located at the end of the main road leading to the Vatican, “to express his concern for the war,” said Matteo Bruni, director of the Vatican press office. The pope spent about half an hour at the embassy, he said. Although the embassy told Catholic News Service it had no statement, Ambassador Aleksandr Avdeyev told Russian media: “The focus of the conversation was the humanitarian situation in Ukraine. Pope Francis expressed great concern for the situation of the entire population, both in the Donbas (in Eastern Ukraine) and in other areas, and called for the protection of children, the protection of the sick and suffering, the protection of people.” According to the pope, “this is the main Christian goal,” Avdeev told the government-owned RIA Novosti news agency. Avdeev also categorically denied to the Rome correspondent of the Russian news agency TASS that Pope Francis had offered to mediate the conflict, an idea reported by the Argentine news agency Télam.

CLEVELAND, OH (CNS) – An estimated 5.2 million children in 21 countries, including the United States, lost at least one parent, a custodial grandparent or a primary caregiver to COVID-19 during the first 20 months of the pandemic, social researchers and child well-being advocates said in a new study. Notably, the researchers estimated that the number of children orphaned because of the pandemic nearly doubled during the six-month period ending on Oct. 31, 2021, a period corresponding largely with the surge in the delta variant of the coronavirus. The total number of orphaned children during the study period parallels the roughly 5 million COVID-19-caused deaths during the same time frame, the study said. “This finding means that, globally, for every one reported COVID-19 death, at least one child experienced orphanhood or caregiver death,” the researchers concluded. The study was published online Feb. 24 by the British medical journal The Lancet. The study defined orphanhood as the death of one or both parents, one or both custodial grandparents, or a primary caregiver. Catholic Relief Services representatives described the estimates as “eye-opening” and agreed with the researchers’ conclusion that “an evidence-based emergency response is becoming increasingly urgent” to meet the challenges faced by children pushed into orphanhood by the pandemic.

Catholics urged to oppose bills that would expand abortion in Maryland

ANNAPOLIS, MD (CNS) – The Maryland Catholic Conference has urged Catholics and other pro-lifers to actively oppose several bills being considered by the state’s lawmakers in Annapolis that would broaden and strengthen right to abortion laws in Maryland. “Given that abortion is ubiquitous in our state, Maryland women are not looking for abortion expansion, but rather help with the basic necessities they need to survive and thrive,” said Jenny Kraska, Executive Director of the Maryland Catholic Conference. “It is not more abortion that Maryland needs, but a clear understanding of the diverse demographic in our state and support and resources for growing families.” Several measures to protect a right to abortion and expand the availability of abortion are being considered in the House of Delegates. A bill introduced by House Speaker Adrienne Jones, a Democrat, would make abortion a right protected by the state’s constitution. Jones’s measure would put the issue forth as a ballot referendum to be decided by state voters. “This is the most serious and all-encompassing abortion bill introduced this session,” said Susan Gibbs, a spokesperson for the Maryland Catholic Conference, the public policy arm of the Washington and Baltimore archdioceses and the Diocese of Wilmington, Delaware. The Washington Archdiocese and the Wilmington Diocese include a number of Maryland counties. Among other measures one would make permanent Medicaid coverage of abortion.

FLORENCE, Italy (CNS) – Bishops and mayors from cities around the Mediterranean gathered to talk about migration, peace, development and the promotion of human rights, but war broke out in Ukraine and overshadowed their discussions. Benjamina Karic, the 31-year-old mayor of Sarajevo, Bosnia-Herzegovina, was at the meeting in Florence. Her city has become the symbol of the last war fought in Europe – the 1991-95 Balkans war. Karic, speaking on Italian television on Feb. 26, offered prayers for the people in Ukraine’s capital, Kyiv, especially for the frightened children huddled in shelters as the fighting continued. The “Mediterranean for Peace” meeting opened in Florence on Feb. 23 before Russian President Vladimir Putin launched his offensive. The gathering brought together 60 bishops from Europe, the Middle East and North Africa for their own meeting and for joint discussions with 65 mayors from cities in 20 countries around the Mediterranean basin. Pope Francis had been scheduled to address the bishops and mayors at the conclusion of their meeting on Feb. 27 and to celebrate a Mass in Florence, but he canceled his trip after his doctors prescribed rest for severe knee pain. Cardinal Gualtiero Bassetti, president of the Italian bishops’ conference, celebrated the Mass instead, leading prayers for Pope Francis and, especially, for an end to what he described in his homily as “an unjust and useless war.” “The madness of war must be stopped,” the cardinal said on Feb. 26 as he opened a joint session of the bishops and mayors. Too many of the bishops and mayors present “are familiar with this scourge, which is why we have asked and continue to ask for peace. Every conflict is a ‘useless slaughter,’ as Benedict XV said at the height of the First World War.” 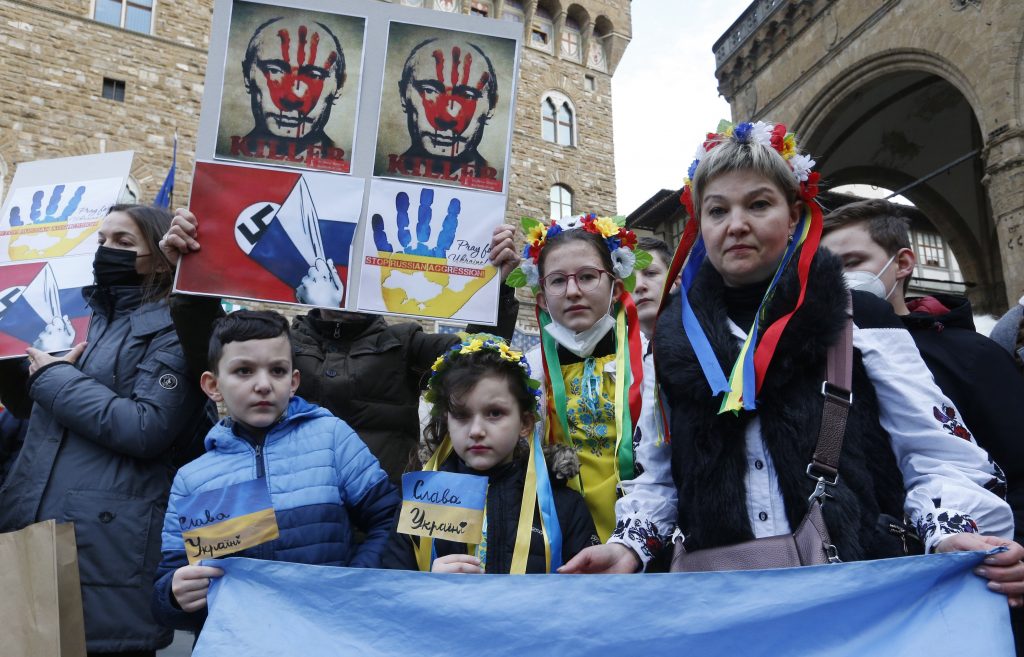