DUBLIN (CNS) — Pope Francis has elevated the National Sanctuary of Our Lady of Knock to the status of an International Shrine of Eucharistic and Marian Devotion. In a message delivered from the Vatican via video link March 19, the feast of St. Joseph, Pope Francis described it as an “important moment in the life of the shrine” and “a great responsibility.” With all churches in Ireland closed to public worship under Level 5 COVID-19 restrictions, the pope’s message was relayed to an empty Apparition Chapel at Knock Shrine, where Mass was concelebrated by Archbishop Michael Neary of Tuam and Knock’s rector, Father Richard Gibbons. The Mass was livestreamed. Speaking in Italian, Pope Francis said the designation would mean always having “your arms wide open as a sign of welcome to every pilgrim who may arrive from any part of the world, asking nothing in return but only recognizing him as a brother or a sister who desires to share the same experience of fraternal prayer.” Paying tribute to the Irish faithful he said: “You have been a missionary people. We cannot forget how many priests left their homeland in order to become missionaries of the Gospel. Nor can we forget the many lay people who immigrated to faraway lands but still kept their devotion to Our Lady.”

Pope says he, too, kneels on Myanmar streets, begging for end to violence

VATICAN CITY (CNS) — As security forces in Myanmar have increased their crackdown on civilians, with disappearances, detentions and the killing of peaceful protesters, Pope Francis appealed for an end to violence and the start of dialogue. “Once again, and with much sorrow, I feel compelled to mention the tragic situation in Myanmar, where so many people, especially young people, are losing their lives for offering hope to their country,” the pope said at the end of his weekly general audience March 17. Without mentioning her name, the pope recalled the iconic gestures of Sister Ann Nu Thawng, who made headlines when photographs were published of her kneeling before police seeking to shield peaceful protesters and of her extending her arms begging police not to shoot or hurt anyone. “I, too, kneel on the streets of Myanmar and say, ‘Stop the violence,’” Pope Francis said. “I, too, spread wide my arms and say, ‘Make way for dialogue.’” Bloodshed “resolves nothing,” he said, repeating his call for dialogue to begin.

WASHINGTON (CNS) — Legislation introduced in the Senate and the House aims to protect “the cherished freedom of religious liberty” of faith-based foster care and adoption providers who believe children “deserve to be placed with a married mother and father,” the chairmen of three U.S. bishops’ committees said March 15. The Child Welfare Provider Inclusion Act of 2021 would prevent the federal government and any state receiving federal funds for child welfare services from taking “adverse action against a provider that declines to conduct its services in a manner that would violate its religious or moral principles.” Sen. Tim Scott, R-S.C., and Rep. Mike Kelly, R-Pa., introduced identical bills in their respective chambers March 10. The measure would cover all agencies that receive funding under Part B or Part E of Title IV of the Social Security Act. Part B covers child and family services, and Part E covers federal payments for foster care, prevention and permanency. “Child welfare providers, who serve the needs and rights of children regardless of background, enjoy the cherished freedom of religious liberty like all Americans,” the bishops wrote in a letter of support to Scott and Kelly.

SAO PAULO (CNS) — The Brazilian bishops’ conference and five civil society groups criticized the federal government response to the COVID-19 pandemic. In a document titled, “The People Cannot Pay With Their Lives,” the groups said it was time to end the escalation of death. The groups, which formed the Pact for Life and for Brazil consortium, presented the document on a video call to the National Forum of Governors. “There is no time to waste; denialism kills,” said the document, referring to stances taken by Brazilian President Jair Bolsonaro, who has denied the critical situation the country is facing and downplayed the importance of using masks and maintaining social distancing. Brazil faces its worst peak of the COVID-19 pandemic, and the six signatories call for the mass vaccination of the population. “The Brazilian people need vaccines now. The virus will not go away through obscurantism, angry speeches or offensive phrases. Enough nonsense and irresponsibility,” the document said.

BEIRUT (CNS) — Lebanon is facing a “virus of crises.” In the throes of a collapsing economy exacerbated by the coronavirus pandemic and devastation from the catastrophic Beirut port blast last August, Lebanon is sinking further into a dire situation. “Now we have the ‘new’ poor,” Carmelite Father Michel Abboud, president of Caritas Lebanon said of the rapidly rising segment of the country’s population. “So many people have lost their jobs. Before, they came to us to donate. Now, in despair, they are coming to ask for help.” The Lebanese currency has lost nearly 90% of its value over the past 18 months, driving more than half of the population below the poverty line. A wage equal to $1,000 is now worth less than $100, and inflation is skyrocketing. “The suffering of the people. The anxiety of the people. The ‘virus’ of the crises in Lebanon. We have many problems in Lebanon,” Father Abboud told Catholic News Service. “Now we are in the tunnel. The majority of families repeat the same expression to us: ‘Our lives have changed. We were well-to-do, now we are poor,’” he said. “It’s a tragedy.”

RICHMOND, Va. (CNS) — By signing a measure that inserts abortion without limits into Virginia’s health benefits exchange, Gov. Ralph Northam “has crossed yet another tragic threshold,” said the heads of the state’s two Catholic dioceses. “We decry the enactment of this deplorable policy, which is built on the destructive lie that abortion is health care. We are saddened when we contemplate the increased number of unborn lives likely to be lost as a result,” Arlington Bishop Michael F. Burbidge and Richmond Bishop Barry C. Knestout said in a joint statement March 12. The health exchange is a virtual marketplace created under the federal Affordable Care Act, and through it an estimated 240,000 Virginians access their health plans, the bishops explained. “Under state law for the past decade, plans participating in Virginia’s health exchange were prohibited from covering most abortions,” they said. “This fundamentally pro-life provision undoubtedly saved many lives. Starting July 1 of this year, however, that provision will be eradicated from our law. Consequently, and tragically, health plans in the exchange will be allowed to cover abortions for any reason.” 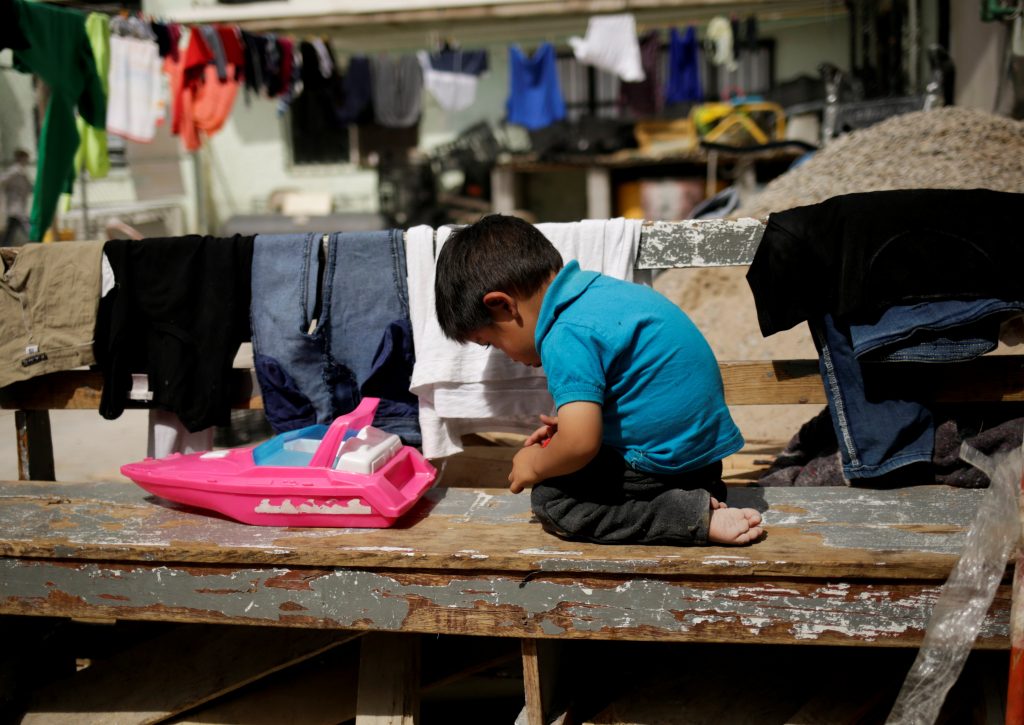 A child from Central America, who was deported from the U.S. with his family, plays with a toy boat inside the Good Samaritan shelter in Ciudad Juarez, Mexico, March 21, 2021. (CNS photo/Jose Luis Gonzalez, Reuters)