DUBLIN (CNS) — Alcohol, smoking and chocolates are some of the most well-known vices that people traditionally give up during Lent. But now Massgoers in Ireland are being urged to make what might be an even harder sacrifice throughout the penitential six-week period — switching off their mobile phones. Parishioners in Navan, County Meath, are being urged to “reconnect with their families” in the weeks leading up to Easter by talking to one another rather than texting and browsing online. The “Invitation for Lent 2019” urges churchgoers to “reduce screen time in order to increase family time.” Father Robert McCabe of St. Mary’s Church, Navan, said he hopes parishioners will make a permanent lifestyle change, rather than just putting down their devices during Lent. “Everybody can benefit from spending less time on their phones and laptops and using that time to communicate instead with their families,” he said. “Even members of the clergy are guilty of being on their phones too much, and Pope Francis himself has highlighted this point when he chastised priests and bishops who take pictures with their mobiles during Masses, saying they should lift up their hearts rather than their mobiles.”

VATICAN CITY (CNS) — For the first time in 300 years, the marble steps of the Holy Stairs will be free from the thick wooden panels installed in 1723 to protect the stairs and left uncovered for the public. For at least 40 days, people will be able to touch and climb the bare stones that, according to tradition, are the ones Jesus climbed when Pontius Pilate brought him before the crowd and handed him over to be crucified. The soon-to-be cleaned steps and newly restored frescoed stairway will be unveiled April 11, the week before Holy Week, during a special blessing ceremony at the Sanctuary of the Holy Stairs. The marble steps were going to be left open to the public temporarily before the original and restored wooden panels would be put back on. The decision was made during one of the final phases of the sanctuary’s restoration — a 20-year-long project overseen by the Vatican Museums and funded with the help of private donors, foundations and the Patrons of the Arts in the Vatican Museums. Paolo Violini, the Vatican Museums’ head fresco restorer, and his team were so astonished and moved when they saw the degree to which the stone steps had been worn away, he felt this hidden testimony of faith had to be seen and experienced — even just temporarily — by today’s faithful.

WASHINGTON (CNS) — Republican leaders in the House are calling on House Speaker Nancy Pelosi, D-California, and other House Democrats “to stop blocking” a vote on the Born-Alive Abortion Survivors Protection Act. The measure “demands a vote,” Rep. Chris Smith, R-New Jersey, said at a March 13 news conference, surrounded by other GOP congressional leaders and pro-life advocates. “It requires appropriate care to be given to any child who survives an attempted abortion.” He also emphasized that everyone must understand that “no mother, no woman can be prosecuted under this bill, just like every other pro-life legislation including the Partial-Birth Abortion Act, which is current law. The women are never prosecuted, they are the co-victims,” Smith added. The Born Alive Abortion Survivors Protection Act, known as H.R. 962, and its companion bill in the Senate, S. 311, have “strong criminal penalties for the abortionist” who violates the requirement to give appropriate care to a baby that survives a failed abortion. Smith explained that under the legislation any health care provider who does not “exercise the same degree of professional skill, care and diligence to preserve the life and health of the child as a reasonably diligent and conscientious health care practitioner would render to any other child born alive at the same gestational age” will be fined or imprisoned for up to five years.

VATICAN CITY (CNS) — The Vatican’s tentative agreement with the government of mainland China obviously has a diplomatic component, but it was motivated by a desire to spread the Gospel and ensure the appropriate freedom of the Catholic Church, the Vatican secretary of state wrote. A firm belief that the Catholic Church truly is “catholic” or universal “pushes the Holy See to nurture no distrust or hostility toward any country, but to follow the way of dialogue in order to reduce distances, overcome misunderstandings and avoid new divisions,” Cardinal Pietro Parolin wrote in the preface to a new book. The book, “The Church in China,” is a collection of essays published in the Jesuit journal La Civilta Cattolica and reflects themes treated by the “China Forum for Civilizational Dialogue,” a project of the journal and Georgetown University. In mid-September, representatives of the Vatican and the Chinese government signed what they described as a “provisional agreement” on the appointment of bishops, a key sticking point in Vatican-Chinese relations for decades. Just prior to the agreement’s signing, Pope Francis lifted the excommunications or regularized the status of seven bishops who had been ordained with government approval, but not the Vatican’s consent, marking the first time in decades that all the Catholic bishops in China were in full communion with the pope.

SACRAMENTO, Calif. (CNS) — The Catholic bishops of California welcomed the March 13 decision by Democratic Gov. Gavin Newsom. “We appreciate this recognition that the state has the adequate means to defend human dignity and public safety without recourse to capital punishment,” San Francisco Archbishop Salvatore J. Cordileone said in a statement on behalf of the state’s bishops. California’s San Quentin State Prison is located in his archdiocese. The facility is California’s oldest penitentiary and it houses the state’s only death row for men and currently has 737 inmates condemned to death. “We ask the governor to urge the Legislature to find a permanent legislative solution that will end the practice of capital punishment in our state for good,” the archbishop said. Because Newsom’s declaration is a temporary reprieve for the death-row inmates, Archbishop Cordileone said he and his fellow Catholic bishops are encouraging him “to use well the time of the moratorium to promote civil dialogue on alternatives to the death penalty, including giving more needed attention and care to the victims of violence and their families.”

CINCINNATI (CNS) — The U.S. Court of Appeals for the 6th Circuit in Cincinnati ruled March 12 that the state of Ohio can stop funding Medicaid services provided by Planned Parenthood and other abortion facilities. In an 11-6 vote, the court overturned a ruling last year by a three-judge panel of the court that the funding ban violated the due process rights of Planned Parenthood affiliates. “Private organizations do not have a constitutional right to obtain governmental funding to support their activities,” said Judge Jeffrey Sutton, who wrote in the majority opinion. “The state also may choose not to subsidize constitutionally protected activities,” he continued. “Just as it has no obligation to provide a platform for an individual’s free speech, say a speaker’s corner in downtown Columbus, it has no obligation to pay for a woman’s abortion. Case after case establishes that a government may refuse to subsidize abortion services.” Sutton also said Ohio’s law does not “create an undue burden on a woman’s right to an abortion.”

WASHINGTON (CNS) — Officials at Georgetown University were “deeply troubled” to learn that the school’s former tennis coach, Gordon Ernst, is alleged to be part of a widespread college admissions scandal. He is one of at least nine athletic coaches and 33 parents, including celebrity moms, charged March 12 in the scandal that involved bribing college coaches and others to secure coveted spots at selected colleges and universities around the country. Ernst, head coach for the men’s and women’s tennis teams at Georgetown from 2006 to 2017, resigned last year from the school and is currently the tennis coach at the University of Rhode Island. He was charged with conspiracy to commit racketeering March 12 and accused of accepting $2.7 million in bribes. He was released on a $200,000 bond later that day. Ernst, who resides in Maryland, had to surrender his passport and can only travel within the state. A letter sent the same day to members of the Georgetown University community by school officials said: “Earlier today, we were deeply troubled to learn that former tennis coach, Gordon Ernst, is alleged to have committed criminal acts against the university that constitute an unprecedented breach of trust. Ernst’s alleged actions are shocking, highly antithetical to our values and violate numerous university policies and ethical standards,” the letter said.

HOUSTON (CNS) — Cardinal Daniel N. DiNardo of Galveston-Houston, president of the U.S. Conference of Catholic Bishops, was taken to the hospital late March 15 after experiencing symptoms of what tests March 16 confirmed was a mild stroke, according to an archdiocesan statement. “The cardinal was resting comfortably and conversing with associates, doctors and nurses,” the statement said. “It is expected that Cardinal DiNardo will remain hospitalized for a few more days of testing and observation, followed by a transfer to another facility for rehabilitation.” Cardinal DiNardo, 69, “is grateful to the doctors and nurses for their wonderful care and for continued prayers during his recovery,” it said. The statement quoted the cardinal as saying, “With so much to do I am looking forward to getting back to work as soon as possible.” The USCCB, in a news release, said it joined with the Galveston-Houston archdiocese “in praying for the cardinal’s quick recovery.” During his recovery Cardinal DiNardo has assigned his USCCB duties to Los Angeles Archbishop Jose H. Gomez, vice president of the conference, as provided for by the USCCB bylaws. 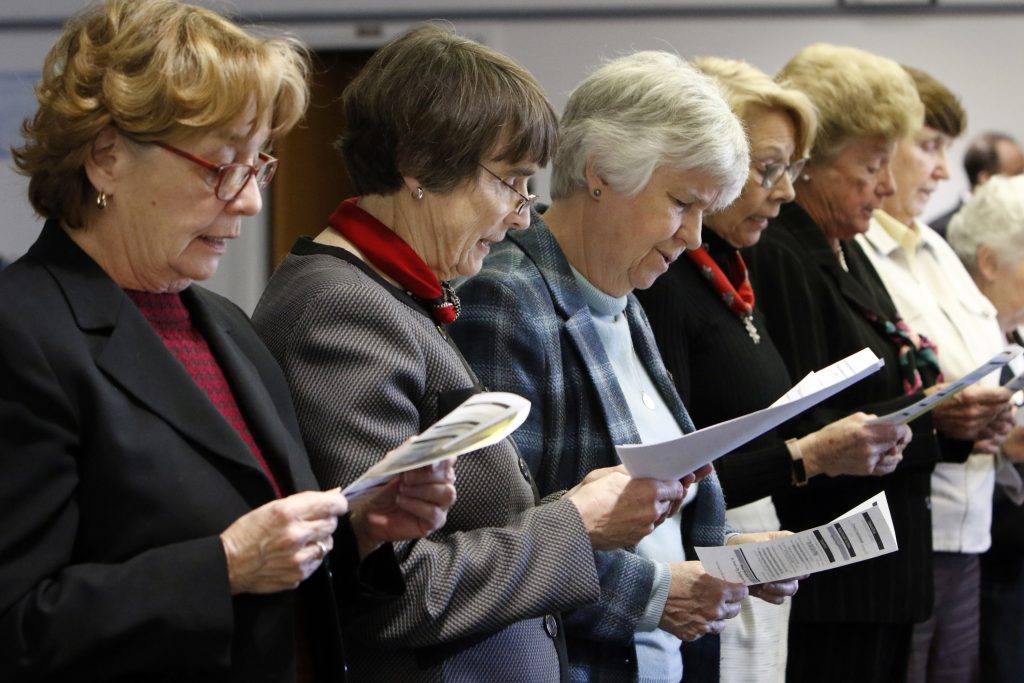 Members of the Sisters of St. Joseph of Brentwood, N.Y., renew their religious vows during a Mass marking their patronal feast and National Catholic Sisters Week at St. Joseph’s College in Patchogue, N.Y., March 13, 2019. With the March 19 feast of St. Joseph falling this year during the school’s spring break, the liturgy was celebrated in advance of the traditional observance. (CNS photo/Gregory A. Shemitz)