VATICAN CITY (CNS) — Pope Francis entrusted to Jesus’ mother the suffering and anguish of millions of people affected by the coronavirus pandemic. In a video message broadcast March 11, the pope prayed before a portrait of Our Lady of Divine Love, beseeching her to “not disdain the entreaties of we who are in trial” but to “deliver us from every danger. We entrust ourselves to you, Health of the Sick, who at the cross took part in Jesus’ pain, keeping your faith firm,” the pope prayed. “You, Salvation of the Roman People, know what we need, and we are sure you will provide so that, as in Cana of Galilee, we may return to joy and to feasting after this time of trial.” The pope’s video message was aired on TV2000, the television channel of the Italian bishops’ conference, and the Diocese of Rome’s Facebook page. Cardinal Angelo De Donatis, papal vicar of Rome, celebrated a Mass at Rome’s Shrine of Divine Love that was aired live after the pope’s message. The Mass, according to the Diocese of Rome, capped a day of prayer and fasting for the city and for Italy, which has been under a government-mandated lockdown to contain the spread of the coronavirus.

New Zealand deacon participates in ordination of his son as bishop

AUCKLAND, New Zealand (CNS) — In a first for New Zealand, a permanent deacon participated in the episcopal ordination Mass of his son. More than 3,000 people from throughout New Zealand attended the March 7 ordination Mass of Bishop Michael Gielen, 48, as an auxiliary bishop of Auckland. Deacon Henk Gielen participated in the Mass, which had strong Maori and Pasifika cultural elements. The Vodafone Events Centre was chosen for the event because St. Patrick’s Cathedral was not large enough to accommodate the expected congregation. Before the Mass, NZ Catholic newspaper asked Deacon Gielen if he could ever have imagined when his son was growing up in the central North Island forestry town of Tokoroa that the pair of them would one day be flanking Auckland Bishop Patrick Dunn, with one as a deacon and the other as a new bishop. “No father knows what will become of their children,” Deacon Gielen said. “But you love them and give them your best and hope they will flourish.” Deacon Gielen, from the Papamoa Coast, said he is very proud of his son — the oldest of six children in his family. He said the news that his son was to be a bishop came as something of a shock, and he is still getting used to the idea. But he thinks God called Bishop Gielen to this ministry because “Michael has a heart for (the) less privileged and a heart of compassion.”

RYE, N.Y. (CNS) — The arrival of the National Guard was a palpable sign that life has changed at Holy Family in New Rochelle, New York. The church is one block outside a state-mandated “containment area” established to fight the spread of COVID-19. “The National Guard came to the door of the rectory with hand sanitizer and information sheets,” according to Father Robert Verrigni, parochial vicar at Holy Family. Holy Family pastor Msgr. Dennis P. Keane told parishioners in a March 12 letter that while the church building is not included in the containment zone, “a large portion of our parish is within this area.” The containment area is a one-mile circle centered on a synagogue where the local coronavirus outbreak is clustered. New Rochelle has the highest concentration of COVID-19 cases in the country. Gov. Andrew Cuomo directed schools in the zone to close and forbade large gatherings of people. A quarantine is not in effect and people may travel freely. Father Verrigni said the practical effect of the containment area mandate is “it’s like a ghost town and there’s no one on the sidewalks or in the street.”

WASHINGTON (CNS) — St. Patrick’s Day parades, long-held traditions in towns and cities throughout the country where onlookers and participants alike get their green on, were called off or postponed indefinitely, amid fears of coronavirus spread. U.S. cites that called off the parades for now include Boston; Chicago; New York; Philadelphia; San Francisco; Cleveland; Seattle; Pittsburgh; Washington; Baltimore; Denver; Kansas City, Missouri; Lexington, Kentucky; and Savannah, Georgia, just to name a few, but these cities have some of the biggest parades in the country and some have been running since the late 1700s or early 1800s. In short, these events are almost a religion, acknowledging Irish culture, if not so much St. Patrick himself, the fifth-century missionary known for converting Ireland to Christianity and whose feast day is March 17. City mayors who announced these cancellations or postponements said they agonized over the decision. Chicago Mayor Lori Lightfoot was no exception, saying at a news conference the decision to indefinitely postpone the city’s three parades on the weekend of March 14 along with the tradition of dyeing the Chicago River on St. Patrick’s Day was not made lightly. Boston Mayor Marty Walsh similarly said canceling the parade is “not something I do lightly.” The news that New York City’s parade was not being held, for the first time since 1762, was announced in a March 11 statement by Gov. Andrew Cuomo and parade organizers. “While I know the parade organizers did not make this decision lightly, public health experts agree that one of the most effective ways to contain the spread of the virus is to limit large gatherings and close contacts,” Cuomo said.

VATICAN CITY (CNS) — Amid a nationwide lockdown due to the coronavirus epidemic, Pope Francis soldiered on with his weekly general audience and called on people to not forget those who suffer from war and violence. During a live broadcast from the library of the Apostolic Palace March 11, the pope said he did not want “this sorrow, this epidemic, to make us forget the poor Syrians who are suffering on the border of Greece and Turkey.” Thousands of men, women and children have crowded the Turkish side of the Greek border after Turkish President Recep Tayyip Erdogan opened the border to refugees and migrants until the European Union meets his demand to add some $3.5 billion in funding for the refugees’ stay in Turkey, in addition to the approximately $6 billion Turkey has already received. The action violates a deal Turkey struck with the EU to close its borders after 1 million migrants flooded into Europe from Turkey during the 2015-16 migrant crisis. Critics have accused Erdogan of weaponizing the Syrian refugee humanitarian crisis. The Syrian refugees are “people who have suffered for years, fleeing war, hunger and sickness,” the pope said. “Let us not forget our brothers and sisters, so many children suffering there.” 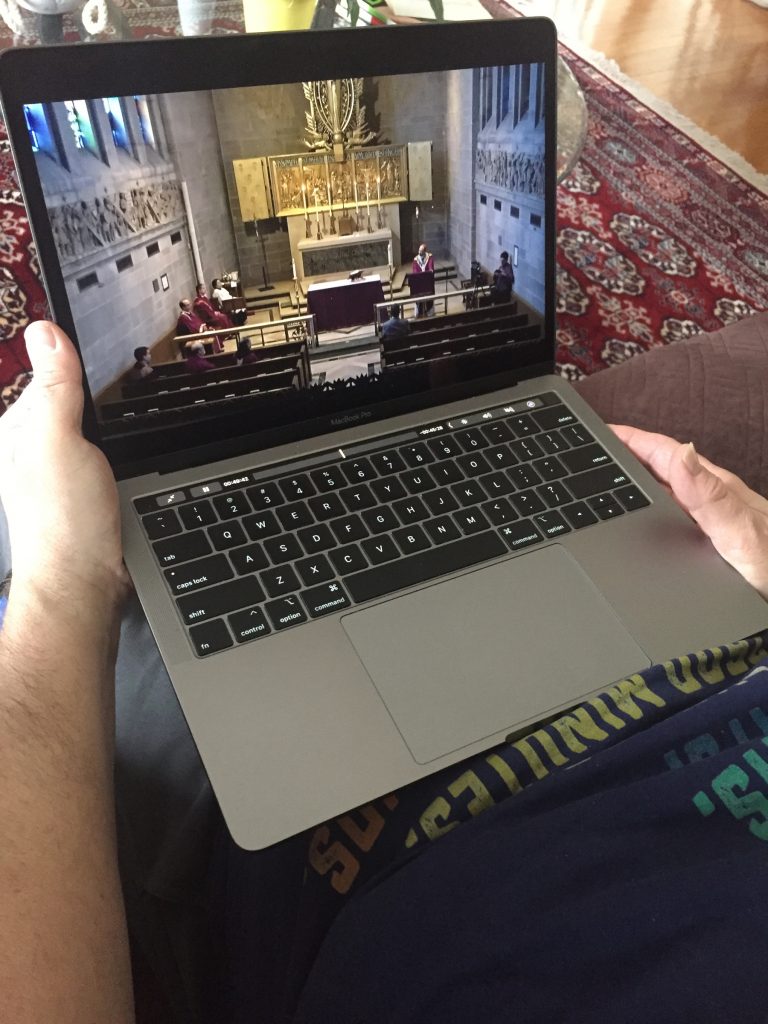 A viewer watches a livestream Mass from the Cathedral of Mary Our Queen in Baltimore celebrated by Baltimore Archbishop William E. Lori and a few concelebrants March 15, 2020. All Sunday Masses in the Archdiocese of Baltimore were canceled amid coronavirus pandemic concerns. At one point nearly 1,800 people were watching the live feed, which exceeds the capacity of the cathedral. (CNS photo/Ann M. Augherton, Arlington Herald)