Catholic nonprofit will honor women religious who died of COVID-19

CHICAGO (CNS) — Chicago-based Catholic Extension plans to help 1,000 women religious with grants in memory of a group of sisters who died in late December of COVID-19 in Elm Grove, Wisconsin. The grants, $1,000 per sister, have been established in the name of a group of School Sisters of Notre Dame, most of whom had been teachers and who died from complications of COVID-19 as the virus spread in the facility that cared for them. Four members of the religious community died on the same day. A total of nine sisters died in a little more than a week in mid-December. Group settings that care for the elderly, such as Notre Dame of Elm Grove in suburban Milwaukee, where the women lived, caused alarm during the COVID-19 pandemic. Many communities of men and women religious, particularly those that have members in their 80s and 90s and beyond, opted for limited contact with the public. But as the cases in Wisconsin showed, even with precautions, the virus seeped in, leaving devastation behind. Catholic Extension is making the special grants available through the Sisters on the Frontlines program. Father Jack Wall, Extension’s president, said: “We are deeply honored to pay tribute to the nine School Sisters of Notre Dame who gave their lives to service in a way that will continue to help others, just as they would have wanted.”

VATICAN CITY (CNS) — The support of Catholics worldwide is an invaluable resource for small Christian communities in the Middle East who have been devastated by the COVID-19 pandemic, a Vatican official said. In a letter sent to bishops around the world and released by the Vatican March 11, Cardinal Leonardo Sandri, prefect of the Congregation for Eastern Churches, asked for continued support for the traditional Good Friday collection for the Holy Land. “If this small gesture of solidarity and sharing — St. Paul and St. Francis of Assisi would call it ‘restitution’ — fails, it will be even more difficult for many of them to resist the temptation to leave their country, more demanding to support the parishes in their pastoral and educational work and harder to sustain the social commitment to the poor and suffering,” Cardinal Sandri said. The collection, taken up at the request of the pope, is administered by the Franciscan Custody of the Holy Land and the Congregation for Eastern Churches, which uses it for the formation of candidates for the priesthood, the support of the clergy, educational activities, cultural formation and subsidies. The Franciscan Custody of the Holy Land, an administratively autonomous province of the Franciscan order, also uses the collection to carry out its mission of preserving most of the shrines connected with the life of Jesus as well as for providing pastoral care to the region’s Catholics, running schools, operating charitable institutions and training future priests and religious.

YOUNGSTOWN, Ohio (CNS) — Two days after the desecration of 16 statues on the grounds of the Basilica of Our Lady of Mount Carmel in Youngstown, parishioners who were gathered for Mass Feb. 28 expressed deep sorrow but also forgiveness for the perpetrator. That day, Youngstown police had apprehended a suspect, Caleb Vancampen, 20, of East Palestine, Ohio, who reportedly confessed to the vandalism committed in the early morning hours of Feb. 26. Police said it helped that the suspect was caught on surveillance video. Vancampen was arraigned for felonious vandalism March 1 in Youngstown Municipal Court. The vandalism garnered extension media coverage and elicited expressions of support and concern from community leaders. Parishioners expressed their heartbreak and outrage in interviews with The Catholic Exponent, newspaper of the Diocese of Youngstown, over the sight of the destroyed statues. “I hope that everyone in this church goes forward to pray for the person who did this,” said parishioner Paul Amon. “Yes, I’m upset, but my heart goes out to the young man who did this,” said Therese Ivansin, parish director of religious education.

SAN SALVADOR, El Salvador (CNS) — Pro-immigrant groups applauded a March 8 decision by the Biden administration to protect some 320,000 Venezuelans in the United States under a temporary immigration program. The Temporary Protection Status program, known as TPS, grants a work permit and reprieve from deportation to certain people whose countries have experienced natural disasters, armed conflicts or exceptional situations so they can remain temporarily in the United States. In the case of Venezuela, political conflict and an economy in a downward spiral has caused some 5 million to flee from the once rich nation. Administration officials also said they would review sanctions put in place by the Trump administration against the country under the control of Nicolas Maduro, whom the U.S. views as a dictator. “Venezuela is experiencing one of the largest humanitarian crises in the world, with a collapsed economy and severe shortages of food, medicine, medical supplies and fuel, all compounded by the COVID-19 pandemic,” said Anna Gallagher, executive director of the Catholic Legal Immigration Network Inc., based in Silver Spring, Maryland, in a March 8 news release. “We are grateful that TPS, a vital humanitarian protection, will be used to safeguard Venezuelans in the United States,” she said.

Pope praises Filipino Catholics as joyful witnesses of the Gospel

VATICAN CITY (CNS) — The joy of the Gospel has been an integral part of the Filipino identity since the arrival of Christianity in the Southeast Asian country five centuries ago, Pope Francis said. Commemorating the 500th anniversary of the arrival of Christianity in the Philippines March 15, the pope told members of Rome’s Filipino community that evangelical zeal is a “part of your genes, a blessed ‘infectiousness’ that I urge you to preserve. I have often said that here in Rome, Filipino women are ‘smugglers’ of faith! Because wherever they go to work, they sow the faith,” he said. Because of COVID-19 restrictions, fewer than 200 representatives of the city’s Filipino community could attend the Mass at the Altar of the Chair in St. Peter’s Basilica. Filipino Cardinal Luis Antonio Tagle, president of Caritas Internationalis and prefect of the Congregation for the Evangelization of Peoples, thanked the pope for the celebration.

Jews, Christians can learn from their shared Scriptures, say scholars

PHILADELPHIA (CNS) — Jews and Christians can learn from each other’s shared Scriptures, according to two renowned academics. Such dialogue, they said, can help to move a divisive society “from polemic to possibility. At a time of tremendous incivility in the U.S., we felt it was really important to model how one could be civil in the most serious disagreements,” said Bible scholar Marc Zvi Brettler of Duke University in North Carolina during a recent webinar hosted by the Institute for Jewish-Catholic Relations, or IJCR, at Jesuit-run St. Joseph’s University in Philadelphia. Brettler joined fellow scholar Amy-Jill Levine of Vanderbilt Divinity School in Tennessee in discussing their book “The Bible With and Without Jesus: How Jews and Christians Read the Same Stories Differently,” published last October.

The work builds on their previous collaboration as co-editors of the widely acclaimed “The Jewish Annotated New Testament,” the revised 2017 edition of which both scholars personally presented to Pope Francis in 2019. That publication, first released in 2011, sparked numerous “emails, letters and calls from readers, from Jews saying, ‘I never knew that Christians thought that,’ and from Christians saying, ‘I never knew Jews thought that,’” Levine said. “We also found that our students had very limited knowledge of each other’s traditions.” 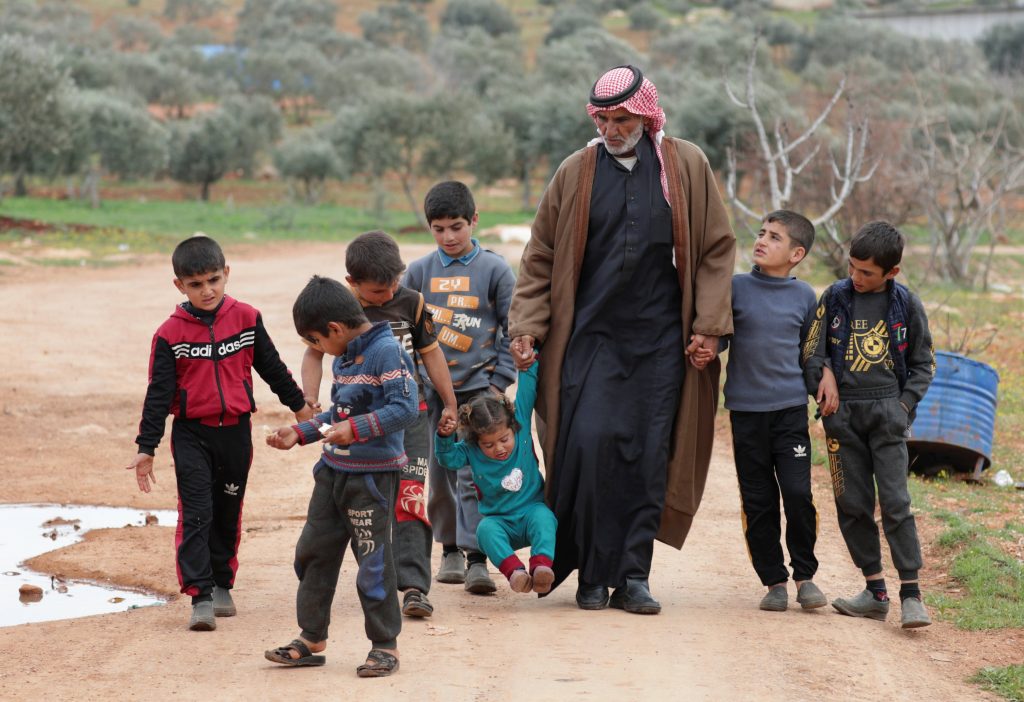 Abdel Razzak al-Khatoun, 84, a Syrian farmer, walks with his grandchildren at a camp for displaced Syrians in Idlib March 11, 2021. All sides need to come together to end the war in Syria and bring some sign of hope to an exhausted and tormented people, Pope Francis said during the March 14 Angelus. (CNS photo/Khalil Ashawi, Reuters)