GREENCASTLE, Ind. (CNS) — Father John Hollowell cried as he sat in the confessional of St. Paul the Apostle Church in Greencastle. It was the summer of 2018 — a time when the tragedy of clergy sexual abuse surfaced again through government investigations and media reports. Father Hollowell cried as he thought of the suffering of abuse victims across several decades. From these tears came a prayer. Father Hollowell asked God to let him bear a cross on behalf of the victims of clergy sexual abuse. About 18 months later, it would seem that prayer was answered. After having several fainting spells and spasms in 2019, Father Hollowell was diagnosed at the Mayo Clinic in Minnesota earlier this month with a brain tumor. His doctors have given him a promising prognosis. But his treatment will involve brain surgery and the potential for radiation, chemotherapy and therapy to recover from possible effects to his speaking and motor skills. Looking back on his prayer, Father Hollowell recalled that it wasn’t just a passing thought. “It definitely stuck in my mind,” he said. “I remember thinking about it for a while and praying it, making a declaration to the Lord in prayer. I knew when I made the prayer in 2018 that it may very well be answered in a very serious way.”

NASHVILLE, Tenn. (CNS) — The historic Church of the Assumption in Nashville’s Germantown neighborhood was one of a number of churches and other buildings that suffered significant damage early March 3 when a tornado cut a swath of destruction through the city that stretched for miles. At least 24 people died from storm-related injuries, including five children under the age of 13, according to news reports. Civil authorities said initially 90 people had been reported missing, but by the next day, most had been found. Two tornadoes swept through Middle Tennessee, and the National Weather Service confirmed the one that touched down in east Nashville was an EF-3. “We are fortunate in so much as we have been able to determine thus far, the employees of the diocese, our parishes and schools have escaped harm and for this we are grateful,” said a statement from the Nashville diocese. “We are assessing building damage at the Church of the Assumption, Holy Name, St. Vincent de Paul and Holy Rosary as well as other parishes that are in the path of the storm.” The Church of the Assumption is one of the oldest Catholic churches in the diocese. It was built in 1858 with, in part, reclaimed bricks from Nashville’s first Catholic church, Holy Rosary Cathedral. Assumption served the German immigrants of Nashville and was occupied by Union troops during the Civil War.

NEW YORK (CNS) — Over half of U.S. Catholics are “very concerned” about global Christian persecution, but this group accounts for 52% of Catholics today, compared to 58% in winter 2019 — a decline of more than 10%, according to a new poll. It also showed the number of U.S. Catholics who think Christian persecution is “very severe” declined by 11% compared to a year ago, dropping from 46% to 41%. Results of the third annual nationwide poll examining the views of U.S. Catholics on the global persecution of Christians were released March 4. The poll was conducted by McLaughlin & Associates for Aid to the Church in Need-USA, an international papal agency that supports suffering and persecuted Christians in more than 140 countries. Respondents also ranked global Christian persecution as a less urgent issue than human trafficking, poverty, climate change and the global refugee crisis. “While 52% of American Catholics show strong concern about the persecution of Christians, it is nevertheless disheartening to see the drop in their number compared to a year ago,” George Marlin, chairman of Aid to the Church in Need-USA, said in a statement.

VATICAN CITY (CNS) — Pope Francis did not recite the Sunday Angelus from the window of his studio overlooking St. Peter’s Square March 8, but he did go to the window to wave and to bless the pilgrims who showed up anyway. The Vatican had announced the day before that the Angelus prayer and the pope’s weekly general audience March 11 would be livestreamed from the papal library “to avoid the risk of spreading the COVID-19 (coronavirus),” especially given the crowding that occurs at the security checkpoints on entering the square. The Italian government and Vatican City State health services have asked people throughout Italy to avoid large gatherings, particularly indoors, and to keep a yard’s distance between people in public in the hopes of slowing the spread of the virus. Pope Francis began his Angelus address acknowledging that “it’s a bit odd, today’s Angelus prayer with the pope ‘caged’ in the library,” but he said he could see there were people in the square and he was with all those who were praying with him. “I am close in prayer to the people who are suffering from the current coronavirus epidemic and all those who are caring for them,” the pope said. “I join my brother bishops in encouraging the faithful to live this difficult moment with the strength of faith, the certainty of hope and the fervor of charity.”

WASHINGTON (CNS) — In the last presidential election, some political pundits referred to the “Catholic vote,” one that predicted Donald Trump’s rise to the presidency, and one that aligned in 2016 with the voting constituency that landed him the White House: overwhelmingly white and politically conservative voters. But what the vote also revealed was a demographic shift taking place among Catholic voters, one that depends more on the ethnic background of the person casting the vote than on a religious affiliation. “When we don’t talk about the white Catholic vote vs. the Hispanic Catholic vote, we’re really missing a lot,” said Elizabeth Podrebarac Sciupac, senior researcher at the Pew Research Center and one of the panelists of “Faith and the Faithful in the 2020 Presidential Primaries” roundtable hosted March 4 by the Initiative on Catholic Social Thought and Public Life at Georgetown University. “We know the entire U.S. is becoming far more politically polarized than ever before and religious groups are not immune to that,” she said. Though 52% of Catholic voters cast ballots for Trump in the 2016 presidential election, the majority of Latino Catholics — which at 38% of the U.S. Catholic population is the second largest ethnic group in the Church — overwhelmingly voted for Democratic candidate Hillary Clinton. 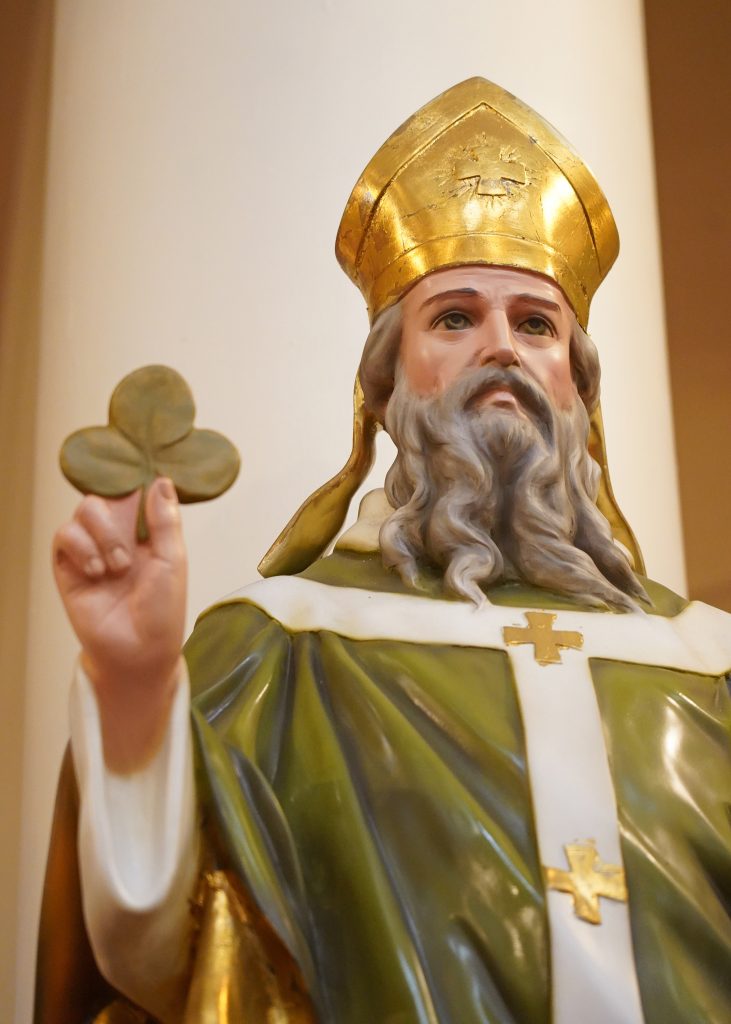 A statue of St. Patrick is seen at the Church of St. Michael in New York City. The feast of St. Patrick, patron of Ireland, is March 17. (CNS photo/Gregory A. Shemitz)