WASHINGTON (CNS) — A special working group of the U.S. bishops formed last November to deal with conflicts that could arise between the policies of President Joe Biden, a Catholic, and church teaching has completed its work, Los Angeles Archbishop José H. Gomez said in a March 1 memo to all the U.S. bishops. Catholic News Service obtained a copy of the memo from Archbishop Gomez, president of the U.S. Conference of Catholic Bishops, as a follow-up to a February memo he sent to the bishops explaining the working group’s two recommendations given to him in its final report. The March 1 memo confirms the actions taken on them. The first recommendation made by the working group, he said, was to write a letter to Biden “conveying the USCCB’s eagerness to work with him on issues where we will undoubtedly express strong support, while acknowledging a lack of support on other issues where we cannot agree with anticipated policies.” Archbishop Gomez sent the letter Jan. 20, Inauguration Day. The second recommendation to develop “a document addressed to all of the Catholic faithful on eucharistic coherence” has been “forwarded to the Committee on Doctrine,” the archbishop said.

WASHINGTON (CNS) — Democratic members of the U.S. Senate were hopeful their version of a $1.9 trillion COVID-19 relief package would be passed the second week of March, so they could send it to President Joe Biden for his signature before unemployment assistance expires March 14. The measure includes $246 billion for extending unemployment benefits through August and increasing the federal supplemental payment from $300 per week to $400. The House, which approved its pandemic relief measure early Feb. 27 and included this provision, will likely have to vote again on its bill to reconcile any changes in the Senate version. Republicans said they would oppose the legislation because it includes billions for programs and projects that do not immediately address pandemic needs. In the House, 212 members — all of the Republicans, plus two Democrats — voted against the bill. It passed with 219 votes. From the floor ahead of the vote, Rep. Chris Smith, R-New Jersey, criticized House Speaker Nancy Pelosi, D-California, and the House Rules Committee for refusing to allow a vote on adding language to the bill “to ensure that taxpayers aren’t forced to subsidize abortion,” as provided by the Hyde Amendment.

ST. PAUL, Minn. (CNS) — The folklore is well known: Need to sell a house? Bury a statue of St. Joseph in the yard. Maybe wrapped in a cloth. But it must be upside down, near the “For Sale” sign, facing the house. Or facing away from the house, near the road. Or near flowers because he likes that. On what exactly is to be done, the practice’s “authorities” are conflicting. So is its provenance. Some say it goes back to St. Andre Bessette, a Holy Cross brother in Montreal who at the turn of the 20th century “planted” St. Joseph medals in a property his monastery wanted to buy. Others say it began somehow in the 1970s. A few realtors provide instructions on their website about how to bury the statue, with testimonials from people who say it worked for them. A website, st-josephstatue.com, is dedicated to the practice, with its mission “to help all believers to sell their houses.” Amazon.com sells several statues for the purpose, including, for $6.72, a “St. Joseph Statue Home Seller Kit” made in the U.S. by veterans. Another seller offers 3-inch, beige, plastic St. Joseph statues in bulk. St. Joseph has long been understood as a patron of the home, but when it comes to burying his statue, don’t, said Father Donald Calloway, author of “Consecration to St. Joseph: The Wonders of Our Spiritual Father.” He said the practice “concerns” him.

BAGHDAD (CNS) — Visiting a Baghdad cathedral “hallowed by the blood of our brothers and sisters” murdered in a terrorist attack that shook the world, Pope Francis said their sacrifice must motivate faith and a commitment to working for the common good. The Syriac Catholic Cathedral of Our Lady of Deliverance, sometimes referred to as Our Lady of Salvation, is now a shrine to 48 Christian martyrs who died Oct. 31, 2010, when militants belonging to a group linked to al-Qaida laid siege to the church, detonating explosives and shooting people; 48 Catholics — including two priests — died inside and more than 100 people were wounded. Photos of the dead, including a 3-year-old, hang over the altar. According to the Vatican, before the terrorist attack and the 2014-2017 war against Islamic State militants, some 5,000 Syriac Catholic families frequented the cathedral; now, it said, no more than 1,000 families belong to all three Syriac Catholic parishes in the capital. Pope Francis met in the church March 5 with the nation’s bishops and a representative group of priests, religious, seminarians and catechists. They came from the Syriac Catholic community, but also Chaldean Catholic, Armenian Catholic and Latin-rite Catholic parishes.

Many Texas parishes to keep face masks, even with mandate lifted

WASHINGTON (CNS) — Many Catholic parishes in Texas will continue to ask parishioners to wear face masks and will limit capacity for Masses even though the state’s governor, Greg Abbott, announced March 2 these pandemic restrictions would be lifted the following week. Bishop Mark J. Seitz of El Paso said he has been getting a lot of questions after the governor’s announcement wondering if it would affect parish coronavirus safety practices. “The short answer is no!” he said in a March 4 statement, noting Abbott has often pointed out that “churches are free to exercise their religious liberty and set their own protocols. The protocols we have established were intended to collaborate with state and local practices but were not undertaken under the direction of these entities,” Bishop Seitz said. He stressed that the Catholic parishes in El Paso County “will not be making any changes at the present time to the protocols we have presently set in place. For the time being, churches will be limited to a maximum of 25% of their capacity. Social distancing and masks will be required in all church facilities.”

WASHINGTON (CNS) — A new report on vocations to men’s and women’s religious orders from the Center for Applied Research in the Apostolate is filled with facts that can help everyone from pastors to formation directors foster more vocations. But the report’s inclusion of many first-person vignettes of factors that helped and hindered their own vocation makes for compelling reading. “The more recent cohort of women and men religious in the United States is more culturally and ethnically diverse than their older cohorts. While this diversity enriches religious life, it also challenges the leadership and the membership of religious communities to better welcome and adjust to the cultural changes in many aspects of their religious life together,” said the report, “Cultural Diversity in Vocations to Religious Life in the United States: A National Study of New Religious Members,” issued in February. CARA sent surveys to 3,196 men and women in formation or new members in religious life and got what it called “usable responses” from 1,163 of them, or 38%. “White respondents make up two-thirds of those who have entered religious life since 2005, with the other third reporting ethnic backgrounds of Asian (12%), Hispanic (11%), Black (4%), and all ‘other’ ethnicities (5%),” the report said. 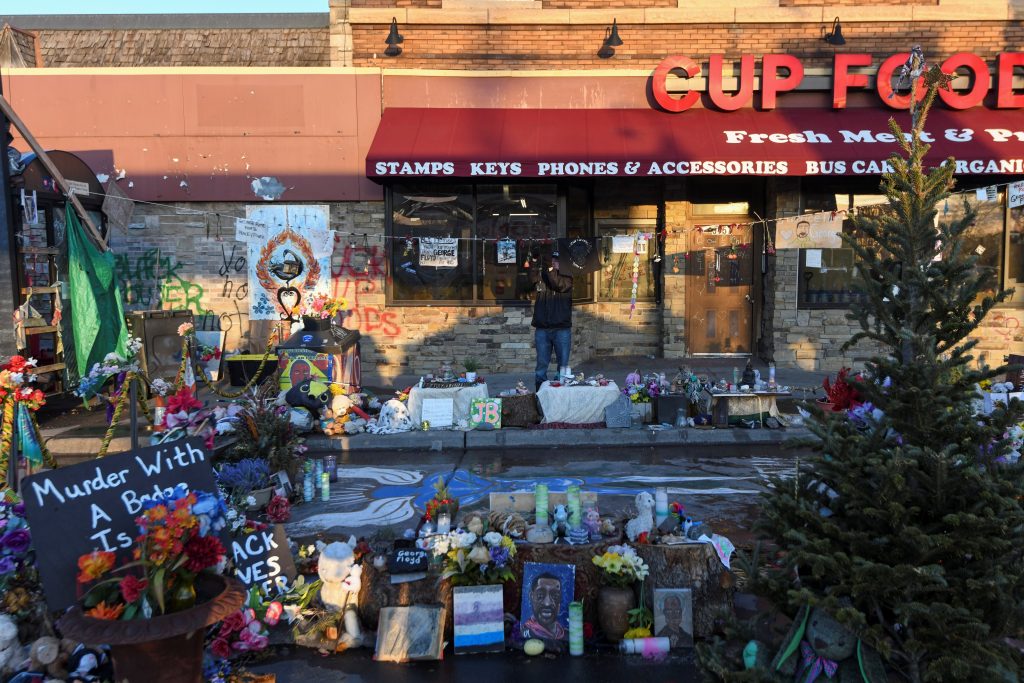 A memorial for George Floyd is seen in Minneapolis March 4, 2021. Floyd, an unarmed Black man, was pinned down by now ex-olice officer Derek Chauvin kneeling on his neck before later dying in the hospital May 25, 2020. Jury selection in Chauvin’s trial began March 8, 2021. (CNS photo/Nicholas Pfosi, Reuters)