EL PASO, Texas (CNS) — Bishops from Texas and Mexico called for a solidarity with migrants as a Catholic response to the national emergency declared at the U.S.-Mexico border. They also questioned if the emergency — declared by U.S. President Donald Trump to free up funds for building a border wall — was as urgent as attending to the waves of migrants seeking asylum in the United States, but who are forced to wait months to make their claims. “Our nation, the United States, has expressed that it is in a national emergency. … We went to the border yesterday. The emergency is not here,” Archbishop Gustavo Garcia-Siller of San Antonio said Feb. 27 at the closing of a border bishops’ meeting on immigration issues. “The emergency is what people are going through to try to come here to have peace, to have understanding, to have respect and have a genuine welcome. All the rhetoric that has been building up about how bad the ‘other’ people are has built up to this national emergency, which is a lie,” Archbishop Garcia-Siller added. “The emergency is how we are going to take care of those who are discriminated and those who are disadvantaged.”

JEFFERSON CITY, Mo. (CNS) — The Missouri House of Representatives Feb. 27 passed the Missouri Stands for the Unborn Act, an omnibus bill that bans abortion when the heartbeat of an unborn child can be detected, which could be as early as six weeks “depending on the method used.” The measure, H.B. 126, also limits late-term abortions after five months of pregnancy; declares the state of Missouri a “sanctuary of life”; bans abortions based on sex, race or Down syndrome; and requires abortion doctors to have adequate malpractice insurance. Marjorie Dannenfelser, president of the national pro-life group Susan B. Anthony List, said the state House’s “bold action shows the growing momentum to humanize our laws and challenge the radical status quo of Roe v. Wade. The United States is one of only seven nations — including China and North Korea — that allow abortion on demand through the moment of birth,” she said in a statement. “Ultimate passage of this compassionate bill would make Missouri the 21st state to stop cruel late-term abortions and enact some of the strongest protections in the country for unborn children and their mothers.”

WASHINGTON (CNS) — Calling the federal government’s migration protection protocols — also known as the “Remain in  Mexico” policy — “baseless and  immoral,” a coalition of 500 religious organizations and leaders have asked Homeland Security Secretary Kirstjen Nielsen for an immediate end to the policy. In a Feb. 26 letter to Nielsen, the religious groups and individuals said the policy “ returns vulnerable asylum-seekers to Mexico and puts them at risk of further harm while they wait for their case to be processed in the United States. Our diverse moral teachings find consistency in the absolute value of the human person and our obligation to protect the most vulnerable among us,” the letter said. “We call on you to uphold our country’s asylum law and respect asylum-seekers and others seeking protection as the human beings they are.” The letter cited two main reasons for ending the policy: It “puts people fleeing danger back in harm’s way,” and it “jeopardizes access to counsel, due process and (the) overall ability for a person to find safety in the United States. Our country’s asylum laws are based upon the international principle of non-refoulement — a promise that we as the United States will not send people back to countries where their lives or freedom will be at risk,” the letter said.

NATIONAL HARBOR, Md. (CNS) — Alison Centofante, representing the pro-life advocacy group Live Action, declared to an audience gathered in suburban Washington: “The biggest scam in our society today is that we are allowing a conversation about abortion to happen without making people define what an abortion is.” And so began a Feb. 28 conversation at the annual Conservative Political Action Conference with Centofante, Matt Smith of Catholic Advocate, U.S. Rep. Jody Hice, R-Georgia, and Mary Vought, an author and political consultant. The talk covered Planned Parenthood and how in the speakers’ view, the organization has desensitized both politicians and Americans in general to abortion. They also focused on various “scams” they said Planned Parenthood uses to lull people into ignorance about the organization does. The abortion provider uses word games, Centofante said. “(They) want a woman’s ‘right to choose’ what? What are you choosing to do?” Politicians who support a right to abortion and the media continue to lap up Planned Parenthood’s rhetoric, according to Centofante. “We have members of Congress that are voting (against) … (anti) infanticide bills. … We have a media that is allowed to talk about abortion in euphemisms … ‘byproduct of conception’ … ‘termination of pregnancy.’”

Ohio quintuplets continue school tradition in a way
not seen before

COLUMBUS, Ohio (CNS) — When it comes to upholding tradition and pride in a particular school, the Whalen family of suburban New Albany takes a back seat to no one. The Whalens stand alongside families in which it’s not unusual for three and even four generations of students to have attended the same Catholic high school in the Diocese of Columbus. But come June 1, the family will rise to the top of the class when the 33rd and 34th family members graduate from St. Francis DeSales High School — and the 35th, 36th and 37th, too. Gina Whalen gave birth to Ben, Mary Kate, Grace, Emma and Alex in 2000. They will be the first set of five siblings to graduate from DeSales since its 1960 founding. They also are believed to be the first quints to graduate from any of the diocese’s current 11 high schools. Their graduation will occur a little more than a month after their 19th birthday — April 22 — which also will be the 24th wedding anniversary of their parents and the 48th birthday of their father, Mike Whalen. The quints have a younger sister, Lindsey, who turned 10 Feb. 6. Gina said she always has thought of the five as individuals rather than a unit, never doing things such as dressing them alike — and it’s readily apparent. Without being told they are quintuplets, someone might never realize it because each one has distinctive features.

CUCUTA, Colombia (CNS) — Pvt. Andry Rosales hugged a Colombian soldier and broke into tears as he surrendered himself to this country’s military. The 21-year-old Venezuelan soldier had sneaked out of his army base across the border early in the morning and crossed into Colombia by walking on a dirt trail used each day by hundreds of migrants who enter Colombia illegally. He carried only a small backpack and wore civilian clothes, which helped him avoid Venezuelan border guards. “We have a terrible dictatorship there,” Rosales said, wiping tears from his face as he was escorted to a Colombian immigration office. “We were given orders to repress protests and shoot at people, even if they were our relatives.” As political unrest increases in Venezuela, hundreds of soldiers and police officers are deserting and seeking shelter in neighboring Colombia. The Catholic Church and other religious groups in the area are responding to this new chapter of Venezuela’s humanitarian crisis by providing shelter for these deserters and helping them to apply for asylum. “Many of us are living in fear,” said a 23-year-old soldier who defected in late February and is now living in a hotel room paid for by the Diocese of Cucuta. He did not want to have his name published, fearing reprisals against family members still living in Venezuela. “We don’t know how much this help will last, but we are very grateful for everything we have gotten so far.”

Vatican announces theme for World Day of Migrants and Refugees

VATICAN CITY (CNS) — After moving the Vatican celebration of the World Day of Migrants and Refugees from January to September, Pope Francis wants Catholics to understand how concern for migrants and refugees is part of a much broader Christian concern for people in need. The Vatican celebration of the World Day of Migrants and Refugees 2019 will be celebrated Sept. 29, the Vatican said, and the pope’s choice for a theme is: “It is not just about migrants.” “With this theme, Pope Francis wants to highlight that his frequent appeals for migrants, refugees, displaced and trafficked people should be understood as integral to his deep concern for all the inhabitants of today’s ‘existential peripheries,’” said a note from the Migrants and Refugees Section of the Dicastery for Promoting Integral Human Development. In other words, the note said, “the hungry, the thirsty, the stranger, the naked, the sick and the prisoner who knock on our door today are Jesus Himself, asking to be encountered and supported.”

WASHINGTON (CNS) — This time, the U.S. Capitol came to students on a field trip. St. Thomas More Catholic Academy — in a Washington neighborhood about five miles from that national landmark — hosted a Feb. 26 congressional hearing to mark the 15th anniversary of the D.C. Opportunity Scholarship Program. Since its inception in 2004, the only federally funded school voucher program has awarded 10,701 scholarships to kindergarten through 12th-grade students from low-income families, giving them the opportunity to attend the school of their choice. The gathering not only provided St. Thomas More students with a novel afterschool activity that unfolded in their cafeteria, but it also offered a forum where two U.S. senators, a scholarship recipient, a school administrator and parents gave heartfelt testimonials on the program’s impact in changing the lives of students and their families. “When parents have a choice, their kids have a chance,” said Sen. Tim Scott, R-South Carolina, who was the first witness to testify at the hearing of the U.S. Senate’s Committee on Homeland Security and Governmental Affairs. Witnesses sat at tables set up on a stage in the school and parish’s Cedar Room. The audience included students and parents whose families have received the D.C. Opportunity Scholarships, along with officials from several schools and other guests. 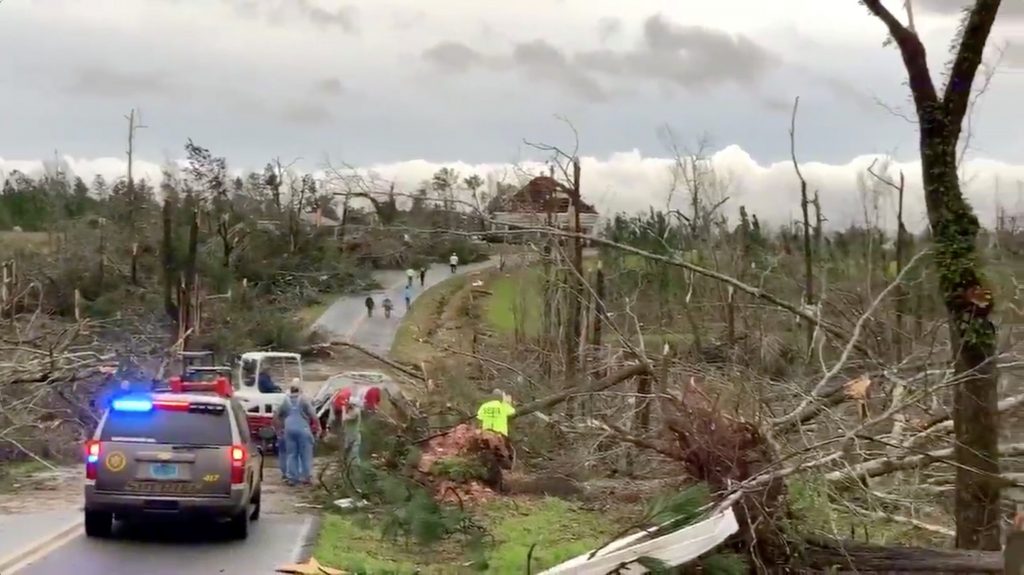 People clear fallen trees and debris on a road following a tornado in Beauregard, Ala., March 3, 2019. At least 23 were confirmed dead in Lee County, Ala. (CNS photo/Scott Fillmer via Reuters)