BALTIMORE (CNS) — No selfies. No cat videos. Not even an artfully composed photo of avocado toast. Come Ash Wednesday, Feb. 26, Sheila Wheltle’s social media accounts will go dark for 40 days. Her last post will read: “Gone for Lent … See you at Easter.” More Americans are embracing the concept of a “digital detox” as social media becomes more ubiquitous and at times more harmful, however, others are disconnecting with a distinctly Catholic twist. Wheltle, a parishioner of St. Mark Church in Catonsville, Maryland, uses Facebook to connect with old friends. She grew up in Philadelphia and later moved to California. She loves how Facebook keeps her in touch with those far-flung friends, but she’s also set it aside for the past nine years during Lent. “As an extrovert, it really is a lot of fun,” Wheltle told the Catholic Review, the media outlet of the Archdiocese of Baltimore. But she said, “Facebook is also a major distraction and time waster.” The tradition of giving up small pleasures, like sweets or coffee, for Lent goes back to the 40 days Jesus spent in the desert fasting and praying. While Catholics are encouraged to pick something that’s actually a sacrifice, that doesn’t mean the sacrifice isn’t beneficial. Father Mark Bialek, pastor of St. John Parish in Westminster, Maryland, said as Lent approaches he is hearing from more of his parishioners this year about the need to unplug.

WASHINGTON (CNS) — Boy Scout councils and units sponsored by Catholic parishes and other entities will not be affected by the Chapter 11 bankruptcy case filed by the Boy Scouts of America, said the chairman of the National Catholic Committee on Scouting. Jim Weiskircher told Catholic News Service in an email late Feb. 18 that all local Scout councils and units will continue “business as usual, while monitoring the situation.” The Boys Scouts of America filed for bankruptcy protection in federal court in Wilmington, Delaware, Feb. 18 in an attempt to work out a compensation plan in response to hundreds of sex-abuse lawsuits. The flood of cases involves several thousand men who claim to have been abused as scouts by scoutmasters and other leaders decades ago. The cases have been filed as some states changed statute-of-limitation laws. Weiskircher wrote that the National Catholic Committee on Scouting does not plan to follow the route of the Church of Jesus Christ of Latter-day Saints, which as of Jan. 1 broke with BSA and introduced its own global youth program. The withdrawal of 400,000 members was a blow to the BSA, dropping its membership below 2 million, the lowest since the World War II era. Membership peaked at more than 4 million in the 1970s.

WASHINGTON (CNS) — Pope Francis’ encyclical on the environment set the path five years ago and now a new effort by the Catholic Climate Covenant seeks to shape an intergenerational movement to respond through action and prayer to the challenges posed by climate change. Called the Catholic Climate Project, the effort is set to build on what parishioners and organizations already are doing while inviting more people to deepen the Catholic commitment to protect creation. “We’re activating across the entire Catholic community, not just those who are already acting,” Jose Aguto, associate director of the Catholic Climate Covenant, told Catholic News Service Feb. 18. Aguto is coordinating the effort, which launched in mid-February, with a team of 13 people from ministries throughout the Catholic community including religious orders, dioceses and advocacy organizations. The project seeks to partner with parishes and organizations that want to begin addressing climate change. Resources have been developed to guide participants through prayer services and liturgies, service projects, intergenerational encounters, healing and bridge-building, public demonstrations, classroom lessons, and advocacy and conversation with church and political leaders. The website is: https://catholicclimatecovenant.org/program/catholic-climate-project.

VATICAN CITY (CNS) — The Vatican announced Feb. 22 that Pope Francis has recognized the martyrdom of a fellow Jesuit, Salvadoran Father Rutilio Grande, and two companions who were murdered en route to a novena in 1977 in El Salvador. Papal recognition of their martyrdom clears the way for their beatification, although the Vatican did not announce a date for the ceremony. “The announcement of the beatification of Father Rutilio Grande has been expected for many years,” said Mercy Sister Ana Maria Pineda, a relative of the slain priest, in an email to Catholic News Service. “Today the news is received with jubilee and joy. That a man of such humble origins be recognized for his surrender to God, his love for the poor, and his efforts to achieve justice, is an example.” Father Grande died March 12, 1977, near his hometown of El Paisnal in rural El Salvador after being shot a dozen times or more along with elderly parishioner Manuel Solorzano and teenager Nelson Rutilio Lemus, who were accompanying him to a novena for the feast of St. Joseph. Their bodies were found lifeless in an overturned Jeep the priest was driving. With a team of Jesuit missionaries and lay pastoral agents, Father Grande, who was the pastor of a church in the neighboring town of Aguilares, evangelized a wide rural area in El Salvador from 1972 until his assassination by death squads. As was the case with the assassination of St. Oscar Romero and tens of thousands of other Salvadorans, no one was ever charged with his death or that of his parishioners.

WASHINGTON (CNS) — Marian Father Donald Calloway believes the Holy Spirit wants to draw Catholics’ attention to St. Joseph, husband of Mary and earthly father of Jesus, “in a major way.” “We need to entrust ourselves to his spiritual care at this very difficult time in the world and in the Church,” the priest told Catholic News Service. “Today the Church is dealing with anthropological crises in the world,” he said. “Many countries are seeking to redefine marriage, men do not understand what it means to be a family, women do not understand what it means to be a woman, divorce rates are at an all-time high, and families are falling apart everywhere.” “We need his loving and strong fatherhood to help us return order to our homes,” Father Calloway added. To that end he is urging individuals, couples, groups, schools, parishes, dioceses and the entire Church to consecrate themselves to St. Joseph. In his new book, “Consecration to St. Joseph: The Wonders of Our Spiritual Father,” published by Marian Press, Father Calloway outlines a 33-day preparation period in Part 1, includes several readings on the “Wonders of Our Spiritual Father” in Part 2 and several prayers to St. Joseph in Part 3.

MONTREAL (CNS) — Jean Vanier, founder of the ecumenical L’Arche communities that provide group homes and spiritual support for people with intellectual disabilities, used his status to have “manipulative” sexual relationships with at least six women, concludes an internal investigation commissioned by the organization. The investigation reports “sincere and consistent testimony covering the period 1970-2005” from six adults, none of whom had disabilities. These women report Vanier initiated sexual relations with them, the report says. Vanier, who died in 2019, asked the women to keep their relations secret. The report says the women reported similar facts, although they did not know each other or about their parallel histories. In a letter addressed to members of L’Arche communities around the world, which was due out Feb. 25 but leaked to the media earlier, Stephan Posner and Stacy Cates-Carney, respectively international officer and vice international officer, presented the main conclusions of the investigation entrusted to the British consulting firm GCPS Consulting, which specializes in situations involving children or vulnerable persons. Members of L’Arche were informed last June that such a process had begun. 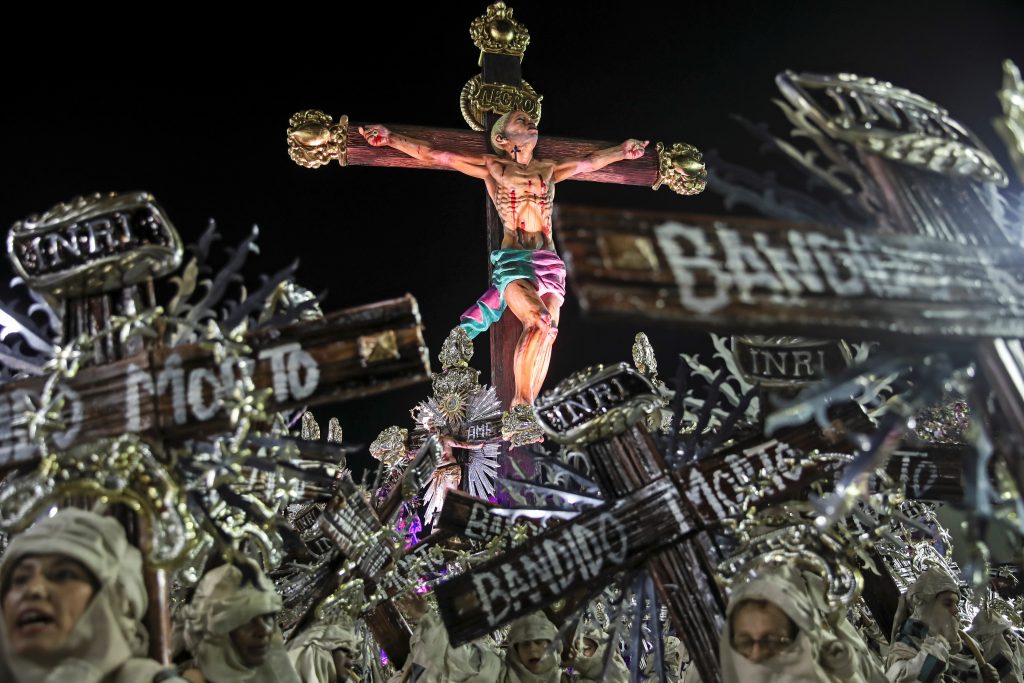 Revellers carry the likeness of a crucified Jesus during Carnival at the Sambadrome in Rio de Janeiro Feb. 24, 2020. The annual celebration precedes Lent, which begins this year Feb. 26. (CNS photo/Ricardo Moraes, Reuters)