Missouri could be first state where no abortions can be performed

ST. LOUIS (CNS) — The Missouri Department of Health and Senior Services has told Planned Parenthood officials it will not renew its St. Louis clinic’s license when it expires unless the clinic makes changes to comply with various state health regulations. Just hours before the license was to expire May 31, St. Louis Circuit Judge Michael Stelzers issued a temporary restraining order allowing the clinic to stay open until June 4. Planned Parenthood had sought the court action and Stelzers issued his order after a May 29 hearing on the matter. The Planned Parenthood clinic is the only abortion facility in Missouri. If it closes, Missouri will be the first state without an operating abortion facility since the U.S. Supreme Court issued its ruling on Roe v. Wade in 1973. Women who want an abortion would have to go to the neighboring state of Illinois. CBS News May 28 quoted Planned Parenthood officials as saying that the state health department had informed them May 20 that the facility might lose its license. According to the news report, state health officials said the clinic must provide state-mandated counseling services, conduct an additional pelvic exam on a woman prior to performing her abortion and resolve what health officials described as “deficient practices” by doctors at the clinic.

WASHINGTON (CNS) — The U.S. Conference of Catholic Bishops has released a new book of Pope Francis’ teachings on the history of the devil, “his empty promises and works” and “how we can actively combat him.” Titled “Rebuking the Devil,” the book is meant for a wide audience and “shows us how to recognize the tricks of the enemy, avoid his traps and defeat his efforts through the power of God in Jesus Christ,” said a May 29 USCCB news release. The book is $12.95 and now available for purchase through the USCCB’s online bookstore at https://bit.ly/2YYla4u. “In this important book, Pope Francis tells us how to use powerful tools of spiritual combat against the devil,” said Bishop Michael F. Burbidge of Arlington, Virginia, who is chairman of the U.S. bishops’ Committee on Communications. Those tools, he said, include “the word of God, adoration of God in the Blessed Sacrament, participation in the sacraments, fasting, prayer and the intercession of Mary, Mother of God, through the most holy rosary. We must recognize that there is a devil who is alive and active, but there is also a shield against him through the power of Jesus Christ!” Bishop Burbidge said.

Ukrainian Catholics set for enthronement of new leader in Philadelphia

HANOI, Vietnam (CNS) — Police in Vietnam have been accused of abducting a Catholic advocate for social and charitable activities. Nguyen Thi Tinh said her husband Nguyen Nang Tinh was seized and pushed into a truck by police officers while he and their two sons were on their way to breakfast May 29, ucanews.com reported. She said police later asked her father-in-law to get the sons, the oldest of whom is 7, from the police station. Nang Tinh, 43, had taken the couple’s two sons to their home in Vinh City, the capital of Nghe An province in north central Vietnam, from Ho Chi Minh City, where she works. The official police newspaper in the province said Nang Tinh was arrested for “producing, disseminating or spreading information and documents aimed at undermining” Vietnam. She said police “have no heart to separate our children from their father.” The woman said they had not done anything wrong. She said law enforcement officers should have acted according to laws and their conscience.

SPRINGFIELD, Ill. (CNS) — In a 64-50 vote May 28, the Illinois House passed an abortion bill the Catholic Conference of Illinois called “an extreme measure” that allows “for the abortion of unborn life at any stage of pregnancy and for any reason.” The legislation now goes to the state Senate for consideration. If it passes, it heads to the desk of Democratic Gov. J.B. Pritzker, who said he plans to sign the legislation into law. In a May 29 statement, the Catholic conference, which is the public policy arm of the state’s Catholic bishops, urged senators to reject the measure, asking them “to consider carefully what message a vote for this legislation sends to our people. “Upholding the right to life of unborn human beings also upholds the right to life of all people, promised in our Constitution and enshrined in our laws,” it said. In its May 28 reaction to the House vote, the Catholic conference said the lawmakers’ decision “to take up and pass the so-called Reproductive Health Act is a grave tragedy and a collective moral failing.” Two days ahead of the House vote, Cardinal Blase J. Cupich, who heads the Chicago archdiocese, and the bishops who head the state’s other five dioceses, urged state lawmakers not to act on “the misnamed ‘Reproductive Health Act,’” which they said was the result of efforts by lawmakers to “propel the legislation into the end-of-session rush.”

BATON ROUGE, La. (CNS) — Louisiana’s Democratic Gov. John Bel Edwards, a Catholic, signed into law a measure that makes nearly all abortions illegal in the state once the fetal heartbeat is detected, which could be as early as six weeks. “As I prepare to sign this bill,” Edwards said in a statement late May 30. “I call on the overwhelming bipartisan majority of legislators who voted for it to join me in continuing to build a better Louisiana that cares for the least among us and provides more opportunity for everyone.” A day earlier, in 79-23 vote, the state House approved the so-called “heartbeat bill.” The state Senate overwhelmingly approved the bill May 6. It has no exceptions for rape or incest but would allow abortions only to prevent a pregnant woman’s death or in cases of “serious risk” to her health. It is expected to be almost immediately challenged in the courts. “I know there are many who feel just as strongly as I do on abortion and disagree with me — and I respect their opinions,” Edwards said in a statement issued shortly after the bill was passed, but he added that his support for the pro-life bill was consistent with his overall pro-life approach to addressing poverty, immigration and many other social issues. “As governor, I have been true to my word and my beliefs on this issue,” he said. “But it is also my sincere belief that being pro-life means more than being pro-birth.”

BUCHAREST, Romania (CNS) — In his first Mass in Romania, Pope Francis recalled the witness of countless Catholics in the country who held on to hope and trusted God amid persecution. Ending an intense first day in the country, the pope celebrated Mass May 31 at St. Joseph Catholic Cathedral in Bucharest commemorating the feast of the Visitation of the Blessed Virgin Mary. Recalling their suffering, the pope said the tears of those persecuted Christians “were a prayer that rose to heaven and nurtured the hope of this people.” He added, “They did not put their hope in the world, but in the Lord, and thus they persevered. I would like to give thanks for these humble victors, these ‘saints-next-door,’ who showed us the way.” An estimated 1,200 people packed the late-19th century cathedral while thousands more followed the Mass on jumbo video screens outside. In his homily, the pope reflected on St. Luke’s account of Mary’s visit to her cousin Elizabeth. The visit as well as her escape to Egypt from King Herod’s persecution with Jesus and Joseph, he said, mirrored the “quiet sacrifices, devotion and self-denial” of countless Romanian women, mothers and grandmothers. “Theirs is a silent, tenacious and unsung sacrifice; they are unafraid to roll up their sleeves and shoulder difficulties for the sake of their children and families, hoping against hope,” the pope said. Nourished by that hope, he continued, Mary continues her journey and invites all Christians “to journey together.” 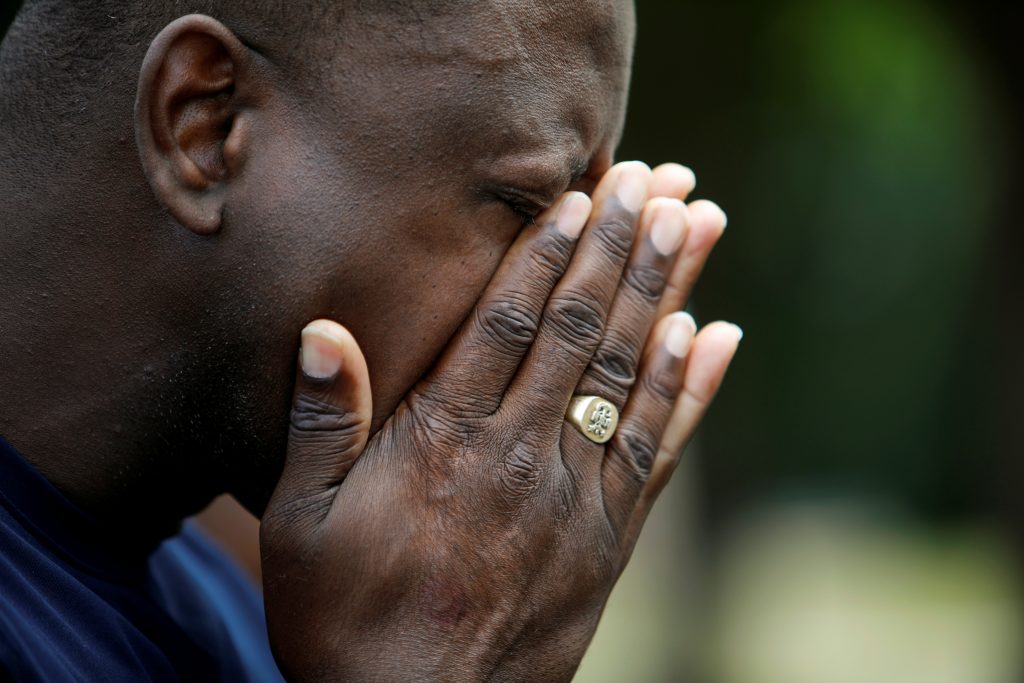 A resident reacts while praying with others June 1, 2019, outside the municipal government complex in Virginia Beach, Va. In the wake of the May 31 mass shooting that left 12 people dead in Virginia Beach, the chairman of the U.S. bishops’ Committee on Domestic Justice and Human Development called for American society to examine why such violent incidents continue to occur. (CNS photo/Jonathan Drake, Reuters)