Miracle child’s Down syndrome is a ‘blessing for our family,’ says couple

DICKSON, Tenn. (CNS) — When Dan Schachle told folks at the Knights’ Supreme Council in New Haven, Connecticut, about his son Mikey’s cure in utero and his birth, they asked if they could inform those working on Father Michael J. McGivney’s sainthood cause. Dan quickly agreed. Word of Mikey’s birth soon made it to Brian Caulfield, vice postulator of Father McGivney’s cause. Part of his job is to do an initial investigation into possible miracles attributed to the Knights of Columbus founder’s intercession. “Basically, a miracle is defined as an extraordinary event that has no current medical or scientific explanation,” Caulfield said. Michelle Schachle became pregnant in late 2014, and on Feb. 25, 2020, she and her husband, Dan, were told their unborn son, their 13th child, had fetal hydrops and had zero chance of living more than a few days or weeks. So they decided to pray for a miracle. They had already knew their child had Down syndrome — but it was the fetal hydrops for which they sought a miracle cure. On May 27, the Vatican announced Pope Francis had approved a miracle attributed to Father McGivney’s intercession, clearing the way for his beatification.

Scholarship honors Indianapolis Catholic who gave up life to help others

INDIANAPOLIS (CNS) — When someone was considering which high school to attend, Chris Beaty never wavered from his belief the choice should be Cathedral High School in Indianapolis. “When I was picking a high school, he was a very outspoken advocate for Cathedral,” recalled Jared Thomas, one of Beaty’s nephews. “He said that in four years, it prepared you not only academically and athletically, but also for life. He went to Cathedral and really found who he was as a person.” From his bear hugs to his efforts to break down racial barriers, Beaty lived his life “with a giant heart filled with love for everyone he met,” said friends and family members of the 2000 Cathedral graduate. And he died in the same way, putting “his life on the line” for others. In the midst of the May 30 riots in downtown Indianapolis after protests about the deaths of black Americans at the hands of police, Beaty was shot and killed when he tried to help two women being attacked near his apartment. So, to honor the person that Beaty became and the two schools he loved, family and friends have established the Chris Beaty Memorial Scholarship Fund to raise money for scholarships to Cathedral and Indiana University, where he graduated from college. A GoFundMe effort set up for that purpose reached its initial goal of $150,000 June 13 — the day of Beaty’s funeral Mass at Cathedral High School. The fund has upped its goal to $200,000, and as of June 18, $161,163 had been raised. To donate to the Chris Beaty Memorial Scholarship Fund, go to www.gofundme.com/f/-chris-beaty-memorial-fund.

Loss of Catholic schools would be an ‘American tragedy,’ says archbishop

LOS ANGELES (CNS) — Archbishop Jose H. Gomez of Los Angeles said June 16 that his recent virtual message to 2020 graduates — posted on YouTube and shared on social media — is “a sign of these unusual times” amid the coronavirus. He said his prayer is that the class of 2020 “will be remembered as a heroic generation that used the gifts of a Catholic education to love and serve and build a better world at a time of national distress, when society had been turned upside down by a deadly pandemic and faced widespread uncertainty about the future.” But he is praying for something else, too, he said: “that we can act to sustain the schools they graduated from, because right now Catholic schools are facing enormous challenges.” Archbishop Gomez, who is president of the U.S. Conference of Catholic Bishops, made the comments in his weekly column, Voices, in Angelus News, the multimedia news platform of the Los Angeles archdiocese. He urged support for government aid to help to keep Catholic schools open.

Singing in church on hiatus for now but will return, say music ministers

PORTLAND, Ore. (CNS) — With choirs and hymnals suspect because they may spread the coronavirus — and perhaps the next pathogen — what is the future of singing at Mass? Though a few parishes have set singing aside for now, liturgical experts say worship is inconceivable without the musical voices of the faithful. Scripture and Church history show that the earliest Christians sang as part of their commemorations. The task amid the current pandemic, the experts say, is to believe the science and then adapt. “For most of the problems in the world that have arisen, people have stepped up to work on that problem,” said Luke Rosen, music director at Corpus Christi Parish in Toledo, Ohio, and choir teacher at St. John’s Jesuit High School. “The entire world is working on this one. We will come up with better solutions than to shut choirs down for two years.” Oregon Catholic Press, which publishes much of the nation’s Catholic liturgical music, is working with liturgists and pastoral musicians around the country to find creative and safe ways to sing. “I don’t believe removing all music and singing from Mass is the answer,” said Wade Wisler, publisher of OCP. “Our love for God and worship of him requires it.”

WASHINGTON (CNS) — Archbishop Allen H. Vigneron and the Archdiocese of Detroit in a June 11 statement condemned “racist and derogatory” language used by a fringe organization located in the archdiocese that bills itself as Catholic and posted a video calling the archbishop of Washington an “African Queen,” saying he is an “accused homosexual.” “The Archdiocese of Detroit has been made aware that an organization located in southeast Michigan has published racist and derogatory language in reference to Archbishop of Washington D.C. Wilton D. Gregory,” the archdiocese said a statement referencing Church Militant/St. Michael’s Media in Ferndale, Michigan. “The organization in question is not affiliated with or endorsed by the Archdiocese of Detroit.” The video disparages the Washington archbishop, who is black, and calls him a liar. Archbishop Vigneron also individually issued a statement saying that “racist and derogatory speech wrongfully diminishes the God-given dignity of others. It is not in accord with the teachings of Christ. As our nation continues its important conversation on racism, it is my hope that the faithful will turn from this and all other acts or attitudes which deny the inherent dignity shared by all people.” 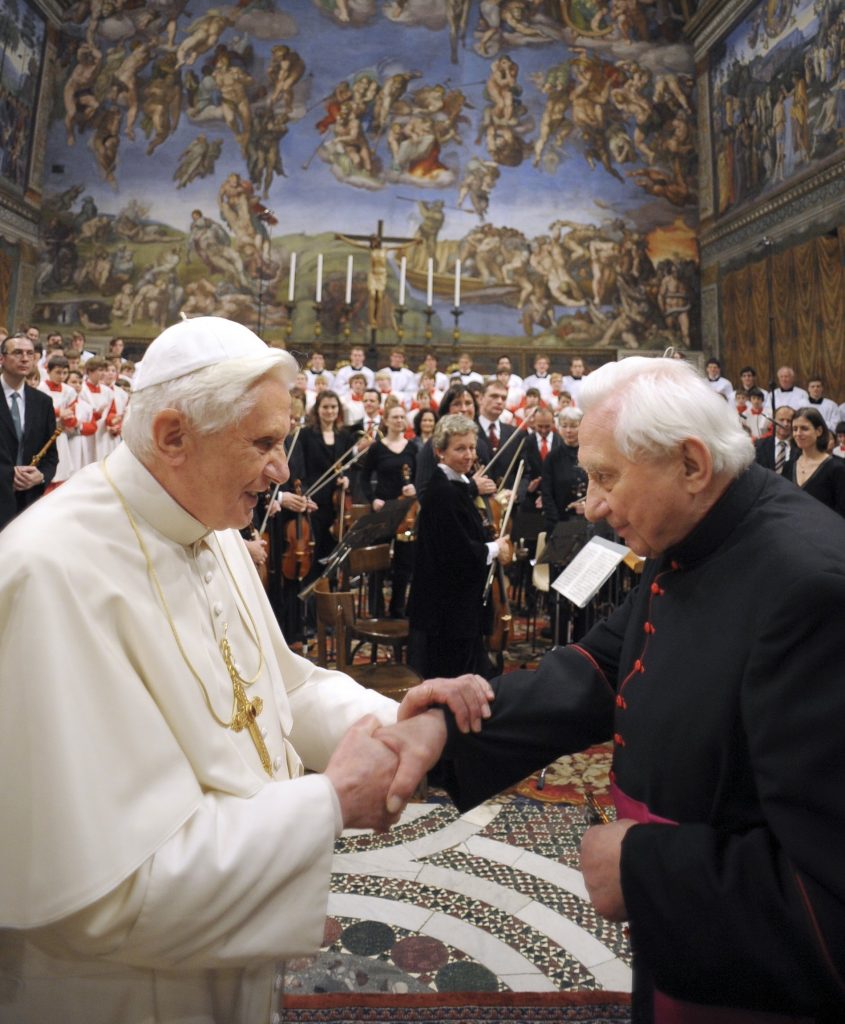 Retired Pope Benedict XVI is seen in a file photo greeting his brother, Msgr. Georg Ratzinger, during a concert for the priest’s 85th birthday in the Sistine Chapel at the Vatican. The Vatican announced June 18, 2020, that Pope Benedict, who is 93, traveled to Germany to visit his ailing older brother, who is 96. (CNS photo/L’Osservatore Romano via Reuters)