Nuncio points to dialogue as a step toward unity after pandemic

WASHINGTON (CNS) — The papal nuncio to the United States told the U.S. bishops that dialogue is a key step on the path to unity as the country emerges from the coronavirus pandemic. “That is important for us during this ‘Amoris Laetitia’ Year of the Family — to encounter families, even broken ones, and to accompany them on their journey through thoughtful dialogue,” Archbishop Christophe Pierre said in his address to the bishops on the first day of their June 16-18 virtual spring meeting. “We know that families are hurting — economically, emotionally, and spiritually. We also know how many members of the flock struggle to live the faith. We wish they would understand the faith perfectly and act in accordance with right reason and consistently make good choices, but we are not a church of the perfect but a pilgrim church in need of the mercy offered generously by Christ,” he said. Some of Archbishop Pierre’s remarks seemed to presage the difficulty the bishops would face when it came time to vote June 17 to approve the drafting of a formal statement on the meaning of the Eucharist in the life of the Catholic Church. Before his address, a motion to approve the meeting’s agenda, usually a formality, prompted a lengthy debate over an additional motion, which eventually failed, to add time to the next day’s debate so as many bishops’ voices could be heard over the “action item” on the drafting of a Communion document by the doctrine committee.

VATICAN CITY (CNS) — Pope Francis called on the international community to come to the aid of the people of Myanmar who continue to suffer from violence, displacement and starvation. After praying the Angelus prayer June 20 with pilgrims in St. Peter’s Square, the pope expressed his support for an appeal by Myanmar’s bishops “calling the entire world’s attention to the heart-rending experience of thousands of people in that country who are displaced and have been dying of hunger. We plead with all to kindly allow humanitarian corridors and that churches, pagodas, monasteries, mosques, temples, as well as schools and hospitals be respected as neutral places of refuge,” he said. “May the heart of Christ touch the hearts of everyone, bringing peace to Myanmar!” The Southeast Asian country has been rocked by violence since Feb. 1 after the military seized power and overthrew the elected civilian government. Myanmar had been ruled by the military for more than 50 years before Aung San Suu Kyi’s elected government took office in April 2016. Commemorating the World Day of Refugees, Pope Francis also used his Angelus appointment to call on everyone to “open our hearts to refugees.”

Catholic dads take a closer look at St. Joseph as ‘pillar of the family’

PORTLAND, Ore. (CNS) — Joe Herman, a longtime member of St. Mary, Star of the Sea Parish in Astoria, Oregon, was named after his grandfather, not St. Joseph. All the same, as a child he had a glow-in-the-dark statue of St. Joseph. “I took it to bed with me,” he said with a smile. He still has that little statue. Herman — like many other Catholic fathers — has been thinking a lot about St. Joseph this year, which Pope Francis proclaimed the Year of St. Joseph, which ends Dec. 8. The year opened Dec. 8. Herman is reading Marian Father Donald Calloway’s book, “Consecration to St. Joseph: The Wonders of Our Spiritual Father,” published by Marian Press in early 2020, and praying on the insights he’s gleaned from it. Herman agrees with the scholars who believe that it would do the modern family good to look to St. Joseph for guidance on family life, adopting a more realistic view of St. Joseph and his role in the Holy Family. “Too many pictures show him an old man,” said Herman, who retired from his masonry business in January. “Too many pictures show a guy who never pounded a nail in his life. You think about it. God’s not stupid. He wants Jesus to have a strong foster father, a man Jesus can look up to.”

Canadian bishops: Indigenous delegation to meet with pope by end of 2021

OTTAWA, Ontario (CNS) — A delegation of Indigenous people from Canada will meet with Pope Francis at the Vatican before the end of the year, the Canadian Conference of Catholic Bishops said. The delegation will include representatives of First Nations, Métis and Inuit national organizations, the bishops said in a statement released June 10. The statement follows the May 30 announcement by the Tk’emlúps te Secwépemc First Nation of the discovery of 215 bodies buried on the site of the former Kamloops Indian Residential School in Kamloops, British Columbia. “The delegation to the Holy See represents an important step on the journey of reconciliation and shared healing for Indigenous Peoples and the Church in Canada,” the bishops said. “With the strong encouragement of Pope Francis, the Bishops of Canada have pledged true and deep commitment to renewing and strengthening relationships with Indigenous Peoples across the land,” the statement said, citing regional and diocesan-wide listening circles that have been established in recent years. Planning for such a meeting had been underway for more than two years in an effort to “foster meaningful encounters of dialogue and healing,” the statement said,” but was stalled by the global COVID-19 pandemic, the statement explained.

NORTH EASTON, Mass. (CNS) — The Museum of Family Prayer in North Easton is now accepting entries for its second annual Mary Garden Contest. The contest began in 2020 to help families “find peace while quarantined at home,” said a news release announcing this year’s competition. “The response was heartwarming. … A Mary Garden is a great activity to share the Catholic faith in a joyful and simple way, especially as families and individuals continue to watch the garden grow.” Participants can send in pictures of the Mary Garden they have created in their home or school. The Museum of Family Prayer encourages the creation of all sorts of gardens — traditional outdoor gardens, spaces with plants and flowers on porches, prayer spaces inside of apartments, or any sacred space used by individuals and families to pray to Mary. A Mary Garden usually contains a statue or image of Mary. Entries for the contest will be divided into two groups: Private/family gardens and community/church gardens. The deadline for entries is July 26. Entries can be submitted at https://www.museumoffamilyprayer.org/mary-garden-contest2021. More details about the contest can be found at the website.

Permanent deacons are reminder of the power of service, pope says

VATICAN CITY (CNS) — A permanent deacon whose ministry is focused on service to the poor and hurting is an antidote to clericalism within the Church because it illustrates that “to love is to serve and to serve is to reign,” Pope Francis said. Meeting most of the Diocese of Rome’s 137 permanent deacons, their wives, children and grandchildren June 19, the pope said the liturgical role of deacons is important, but works of charity and outreach are at the heart of their identity. Describing the purpose of diaconal ordination as “a ministry of service,” the Second Vatican Council restored the identity the ministry had for centuries before it was “reduced to an order of passage to the priesthood,” the pope told them. Emphasizing the importance of service “helps to overcome the scourge of clericalism,” which at its core is to have “a priestly caste ‘above’ the people of God,” the pope said. “If this is not resolved, clericalism will continue in the church. Deacons, precisely because they are dedicated to the service of this people, are a reminder that in the ecclesial body no one can elevate himself above others,” the pope said. 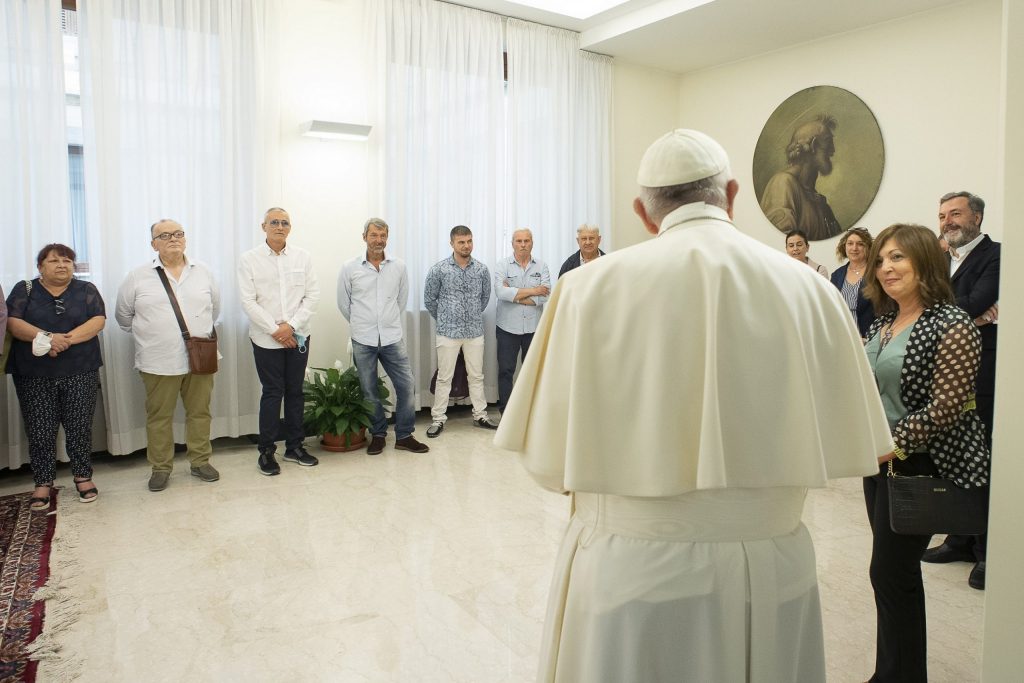 Pope Francis leads a meeting with inmates and staff from the Rebibbia prison in Rome, at his residence at the Vatican June 21, 2021. The pope met with around 22 inmates and staff of the prison. (CNS photo/Vatican Media)