Belgian bishop asks pope not to make him a cardinal

VATICAN CITY (CNS) – Saying he did not want to add to the suffering of survivors of clerical sexual abuse who criticized his appointment as a cardinal, retired Bishop Lucas Van Looy of Ghent, Belgium, asked Pope Francis to withdraw his nomination, and the pope agreed. The Belgian bishops’ conference issued a statement on June 16 announcing the decision and thanking Bishop Van Looy for making the request. Pope Francis’ announcement of May 29 that Bishop Van Looy would be among the 21 cardinals he intended to create on Aug. 27, the statement said, “provoked many positive reactions, but also criticism that (Bishop Van Looy) had not always reacted vigorously enough as bishop of Ghent” when presented with allegations of clerical sexual abuse and other forms of abuse in the Church. “To prevent victims of such abuses from being hurt again as a result of his cardinalate, Bishop Van Looy asked the pope to dispense with the acceptance of this appointment. Pope Francis accepted his request,” the bishops said. “Cardinal (Jozef) De Kesel, (president of the conference), and the Belgian bishops appreciate the decision of Bishop Van Looy. They reiterate their commitment to continue their fight against all forms of abuse in the Catholic Church, in which the interests of the victims and their families always come first,” the statement said.

Catholic school in Uvalde, Texas, is reaching out to help community heal

WASHINGTON, D.C. (CNS) – When schools close for the summer, their websites and Facebook pages often get pretty quiet too. That’s not the case for Sacred Heart Catholic School in Uvalde, Texas, established in 1913 by the Teresian Sisters. The first image on the school’s website is a map of Texas with children’s handprints and the message “Uvalde Strong” with a moving banner underneath that says: “Pray for Uvalde.” Since the last day of school in late May, the school’s Facebook page has had frequent posts. These posts – without directly mentioning the May 24 mass shooting that occurred just a few miles away at Robb Elementary School – tell the story of how this school is reaching out to the local community while dealing with its own loss and heartbreak. On May 20, the pre-K through seventh-grade school posted photos of its own graduates, followed by a post three days later of local graduating high school seniors who came back to visit their former elementary school dressed in graduation caps and gowns. The images of visiting graduates and current students, along with accompanying words of encouragement for them, were posted just a day before the mass shooting by a teenage gunman, who killed 19 children and two teachers at the nearby public elementary school. Sacred Heart’s Facebook posts in the days since that shooting are somber reminders that everything has changed.

WORCESTER, Mass. (CNS) – Worcester Bishop Robert J. McManus has informed Nativity School of Worcester that it may no longer identify itself as a Catholic school following months of private and public discussion on the flying of Black Lives Matter and gay pride flags outside the school. The bishop issued a formal decree on June 16 removing support for the school. In a June 15 letter to the school community, Nativity School President Thomas McKenney said the school will appeal the decision “through appropriate channels” and will continue to display the flags. He said the school contends the flags are “not an endorsement of any organization or ideology” but that they “fly in support of marginalized people.” On June 10, Bishop McManus signed a decree stating that he was upholding his pastoral responsibilities and in accordance with canon law, declared that Nativity School is prohibited “from identifying itself as a ‘Catholic’ school” or using “the title ‘Catholic’ to describe itself,” effective immediately. He also said: “Mass, sacraments and sacramentals are no longer permitted to be celebrated on Nativity School premises or be sponsored by Nativity School in any church building or chapel within the Diocese of Worcester.” The school also will not be allowed to “undertake any fundraising involving diocesan institutions in the Diocese of Worcester and is not permitted to be listed or advertise in the diocesan directory.”

Spanish Dominicans to be beatified as Civil War martyrs

SEVILLE, Spain (CNS) – An elderly nun whose head was crushed with a boulder during Spain’s 1936-1939 Civil War is to be beatified as a martyr with 26 male Dominicans in Seville cathedral. “Showing an extraordinary adherence to the faith and forgiveness for their killers, these martyrs met a premature, inhuman death – they can now rejoice in the glory of eternal light,” Spain’s Dominican order said in a statement. “The sociopolitical situation that arose in Spain before and during the war period is historically known, as is the climate of persecution that republican militiamen exerted against all professing membership of the Catholic Church, whether consecrated or lay. This was the context, poisoned by ideological prejudice and psychological and physical violence.” The statement was published ahead of the June 18 beatification of Sister Ascensión de San José (1861-1937) and three groups of Dominicans martyred during the four-year conflict. It said the nun had been noted for a “childlike simplicity and innocence that enchanted everyone” after joining the Huéscar convent from a large farming family. It added she had suffered lifelong ill health “with great patience and love.” The June 18 Mass, which was to be celebrated by Cardinal Marcello Semeraro, prefect of the Dicastery for the Causes of Saints, will bring the total number of Catholic martyrs beatified or canonized from the Spanish Civil War to 2,112. The war saw 2,000 churches destroyed and up to 8,000 clergy killed, along with tens of thousands of lay Catholics.

BISMARCK, N.D. (CNS) – Bishop David D. Kagan of Bismarck announced on June 16 that the diocese will open an investigation into “the holiness of life and love for God” of North Dakota native Michelle Christine Duppong, who died of cancer on Dec. 25, 2015. She was 31. At the time of her death, Duppong was the Director of Adult Faith Formation for the Diocese of Bismarck. Before that, she was a missionary for six years with the Fellowship of Catholic University Students, or FOCUS. She mentored hundreds of students on college campuses and her final assignment with FOCUS was on its inaugural team at the University of Mary in Bismarck. “Michelle’s holiness of life and love for God certainly touched us here in the Diocese of Bismarck, at the University of Mary and throughout FOCUS, but hers is also a witness which should also be shared with the universal Church,” Bishop Kagan said. He announced the diocesan investigation into her life and faith at the FOCUS new staff training at the University of Mary. The investigation could lead to her beatification and canonization. “Michelle was a radiant, joyful woman with the heart of a true servant,” said Monsignor James Shea, president of the Benedictine university. “For the students on our campus, she was an inspiration and a treasured mentor, teaching them by her example the transformative power of friendship with God.”

WASHINGTON, D.C. (CNS) – A law firm’s June 15 report claiming the innocence of Richard Glossip, an Oklahoma man on death row for more than 25 years, is something that advocates, including Sister Helen Prejean, have long emphasized. Sister Prejean, a Sister of St. Joseph of Medaille, who is a longtime opponent of the death penalty, has visited with Glossip in prison and encouraged people to write to him there. Glossip has been granted a stay of execution on three separate occasions. After the release of the report saying he is innocent, Sister Prejean retweeted statements from Glossip’s attorneys stressing the injustice of his sentence. She also retweeted the remark of Republican Oklahoma state Rep. Kevin McDugle, who said: “If we put Richard Glossip to death, I will fight in this state to abolish the death penalty, simply because the process is not pure.” McDugle, a death penalty supporter, spoke during the news conference where the report on Glossip was issued. “We’ve got an individual sitting on death row that’s been there 25 years and I believe he’s totally innocent,” he said, calling for a new appeals court hearing for Glossip based on the investigation by Houston law firm Reed Smith, which produced the report pro bono. Glossip, 59, was convicted of the 1997 murder of his boss, Barry Alan Van Treese, at the Best Budget Inn in Oklahoma City.

OWO, Nigeria (CNS) – The Catholics attending Mass at St. Francis Xavier Church on Pentecost did not know how much it would cost to participate in the suffering of Jesus, said Bishop Emmanuel Badejo of Oyo. “How much do we understand when he says to us, ‘The time is coming when anyone who kills you will think he is doing a holy service to God,’” Bishop Badejo said, quoting from the Gospel of St. John at the June 17 funeral Mass for many of the victims of the massacre at the church. “We had no idea perhaps till now what extreme form that could take.” Hundreds gathered for the funeral and burial of many of the victims – at least 50 were killed when gunmen spent 20-25 minutes in the church on June 5. Among those at the Mass in the St. Francis parish hall were Bishop Jude Arogundade of Ondo, the diocese in which Owo is located, as well as Ondo Gov. Arakunrin Akeredolu. Bishop Badejo named some of those killed in the massacre: Bridget Ozulumba, 85; Chukwuemeka Emmanuel Njoku, 2; and Mathilda Ogungbade, 3. “None of these did anything wrong, except that they came to worship God at the foot of the cross and altar on that day,” said Bishop Badejo. “There, sudden death was inflicted upon them, and deep sorrow upon their dear ones left behind. These dear ones died, and many others met with trouble while at the foot of the cross.” 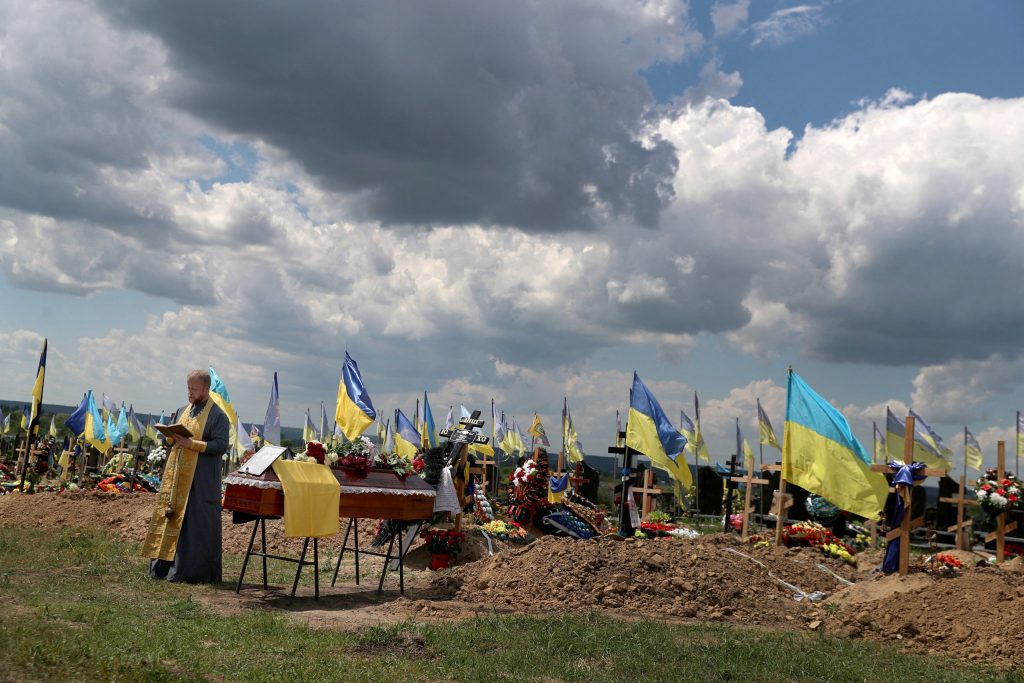 A priest prays during the burial of Evgeny Khrapko, a combat medic and instructor of tactical medicine, in Kharkiv, Ukraine, June 14, 2022. Khrapko was killed during the Russian war. (CNS photo/Ivan Alvarado, Reuters)