VATICAN CITY (CNS) — With the help of the U.S. Department of Homeland Security, a 15th-century copy of a letter Christopher Columbus sent to his royal patrons describing the riches of the New World has been returned to its rightful owner — the Vatican. The rare eight-page document, estimated to be worth $1.2 million, had been secretly replaced with a forgery, while the true document eventually ended up in the hands of a U.S. collector from Atlanta. The late Robert Parsons had purchased the piece for $875,000 in the United States in 2004 “in good faith,” unaware it had been stolen. Callista Gingrich, U.S. ambassador to the Holy See, and representatives of the Department of Homeland Security and its investigations division presented the original copy during a ceremony June 14 at the Vatican Library. Archbishop Jean-Louis Brugues, head of the Vatican Library and Vatican Secret Archives, and Msgr. Cesare Pasini, the library’s prefect, also attended the ceremony. “This is a historic day,” the archbishop said, as an important document that is part of the history of the Americas and Spain “returns home.”

WASHINGTON (CNS) — The bishop of Cleveland said a recent immigration raid at an Ohio gardening and landscape company “makes clear that our current immigration system contributes to the human suffering of migrants and the separation of families.” In a June 6 statement from the Diocese of Cleveland, Bishop Nelson J. Perez said he felt “a great sadness” for the families affected by the raid and whose lives have been disrupted. According to news reports, about 200 agents from U.S. Immigration and Customs Enforcement, known as ICE, surrounded two locations of Corso’s Flower and Garden Center and arrested more than 100 workers in north-central Ohio June 5. A Washington Post story June 6 said that “families of the arrested workers gathered at St. Paul Catholic Church in Norwalk, Ohio, seeking answers as to the whereabouts of their loved ones.” On Facebook, the immigrant advocacy group Hola Ohio posted photos June 6 of some of the children who had a parent or both parents taken in the raid and who had gathered at St. Paul. In the Facebook post, Veronica Dahlberg, the organization’s executive director, said families were “distraught, crying, frightened, missing loved ones and at a loss for what to do.” Via Twitter, she said some children remained in day care after the raid.

WASHINGTON (CNS) — Caring for creation goes hand in hand with the mission of helping retreat-goers connect with God at the Jesuit Retreat House in Parma, Ohio. The center’s tree-enshrouded grounds that filter the sound of nearby traffic in the middle of Cleveland’s largest suburb offer a home for wildlife and a respite for those seeking a quiet place to pray and reflect about God in their life. “The beauty of these grounds and the care of these grounds is our responsibility,” Rick Krivanka, executive director at the retreat house, told Catholic News Service June 18, the third anniversary of the release of Pope Francis’ encyclical on care of the earth, “Laudato Si’, on Care for Our Common Home.” “I believe every act we take in terms of care for the earth, even countless acts that are never seen, make a difference,” he said, in explaining the retreat house’s support for the newly released Catholic Climate Declaration. Made public on the encyclical’s anniversary, the declaration serves as a moral call to action on the environment and urges President Donald Trump to return the United States to the Paris climate change agreement. 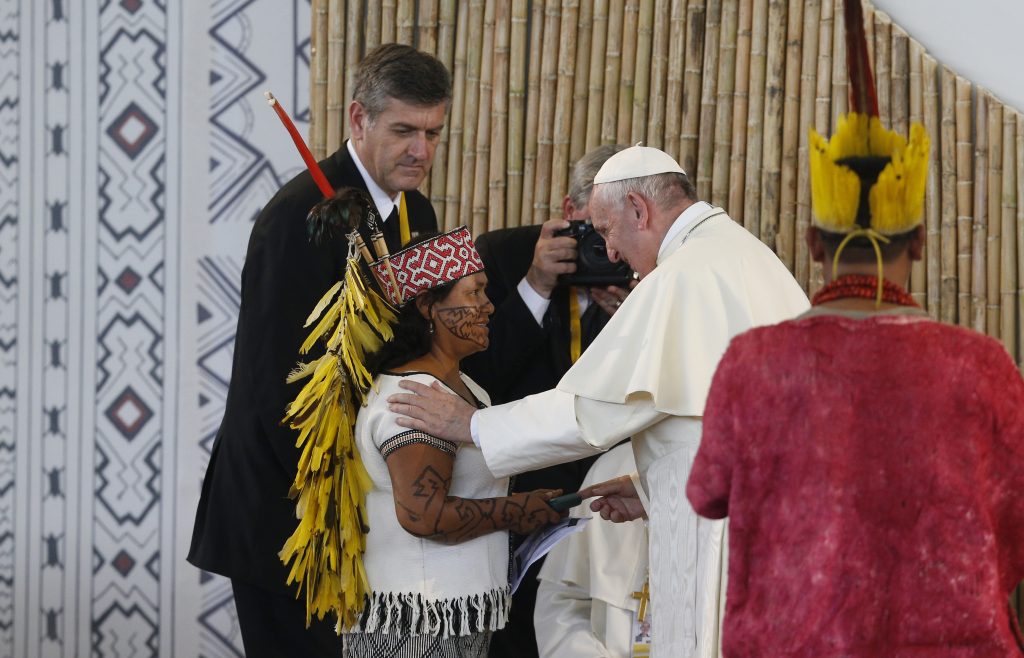 Pope Francis greets a woman during a meeting with people of the Amazon in Puerto Maldonado, Peru, Jan. 19. A Synod of Bishops on the Amazon region in 2019 will address pastoral needs of a region with few priests for the number of Catholics. (CNS photo/Paul Haring)