CHICAGO (CNS) — Democratic Gov. J.B. Pritzker signed into law an abortion bill that Illinois’ Catholic bishops said eliminates “even minimal limitations on abortions under previous law” and whose passage by the legislature marked “a sad moment in our history as a state.” Pritzker signed the legislation June 12 in a ceremony at the Chicago Cultural Center. His action “drew enthusiastic whoops and cheers from the crowd,” The Washington Times reported. Across the country in Vermont June 10, Republican Gov. Phil Scott signed a similarly expansive abortion measure into law. Bishop Christopher J. Coyne of the statewide Diocese of Burlington had said the law “goes far beyond Roe v. Wade.” In Illinois, as the abortion bill made its way through the Illinois House and Senate, the state’s Catholic bishops called it the “misnamed ‘Reproductive Health Act.’” Catholic Conference of Illinois, the public policy arm of the state’s Catholic bishops, labeled it “an extreme measure” because it allows “for the abortion of unborn life at any stage of pregnancy and for any reason.” The conference said lawmakers’ passage of the legislation was “a grave tragedy and a collective moral failing.”

BALTIMORE (CNS) — The U.S. bishops voted June 13 to revise what the U.S. Church teaches its adult members about the death penalty in a passage on the issue in the U.S. Catechism for Adults. The full body of bishops approved the revised passage by a vote of 194 to 8 with three abstentions. It now will need the approval, or “recognitio,” of the Vatican. The passage was the work of the bishops’ Committee on Evangelization and Catechesis, chaired by Auxiliary Bishop Robert E. Barron of Los Angeles. On the first day of the bishops’ spring assembly in Baltimore, Bishop Barron said June 11 that wording emphasizes the dignity of all people and the misapplication of capital punishment. Discussion of this wording was not meant to be a debate on the death penalty overall, he added. The material given to bishops about the additional passage points out that last year, the Congregation for the Doctrine of the Faith released the pope’s revision to the teaching on the death penalty in the universal Catechism of the Catholic Church. In response to that action, the bishops’ Committee on Evangelization and Catechesis made plans to replace its current text in the U.S. adult catechesis with a revised statement. The goal is to “keep our treatment of the death penalty in the U.S. Catechism for Adults in alignment with the revised universal catechism,” Bishop Barron said.

VATICAN CITY (CNS) — Individualism and consumerism undermine the most basic rules of coexistence and challenge the principles of cooperation and mutual understanding promoted by Catholic education, Pope Francis said. “The culture of indifference, which envelops relations between individuals and peoples, as well as the care of the common home, also corrodes the sense of humanism,” the pope said in a June 8 video message to participants at a three-day conference sponsored by the International Office for Catholic Education. A “synergy of the various educational realities” is needed to confront this challenge, the pope said, and particularly requires working with families where one “learns to come out of one’s self and place oneself in front of the other, to listen, to share, to support, to respect, to help, to coexist.” The international congress focused heavily on Pope Francis’ encyclical “Laudato Si’” and “on the contribution of the Catholic schools of the world to educate to solidarity, humanism and the safeguarding” of creation.

AMA applauded for reaffirming its opposition to doctor-assisted suicide

WASHINGTON (CNS) — The chairman of the U.S. bishops’ pro-life committee praised a June 10 decision by the American Medical Association to reaffirm its long-standing policy against physician-assisted suicide. “The practice and promotion of assisted suicide poses grave consequences for our entire society but particularly for persons living with illness, disabilities or socioeconomic disadvantages,” said Archbishop Joseph F. Naumann of Kansas City, Kansas, who is chairman of the U.S. Conference of Catholic Bishops’ Committee on Pro-Life Activities. “The AMA was right to reaffirm its long-standing view that physician-assisted suicide is fundamentally incompatible with the physician’s role as healer,” he said in a June 11 statement. MedPageToday, an online news outlet that covers health care, said the vote came during the AMA’s annual meeting in Chicago. At last year’s meeting, “after impassioned testimony from both sides,” it said, the AMA’s Council on Ethical and Judicial Affairs was asked to further examine the issue of physician-assisted suicide. It presented its findings at the Chicago meeting and recommended the AMA retain its current opposition to the practice.

VATICAN CITY (CNS) — The Catholic Church gives an authentic witness of God’s love for all men and women only when it fosters the grace of unity and communion, Pope Francis said. Unity is part of “the DNA of the Christian community,” the pope said June 12 during his weekly general audience. The gift of unity, he said, “allows us not to fear diversity, not to attach ourselves to things and gifts,” but “to become martyrs, luminous witnesses of God who lives and works in history. We, too, need to rediscover the beauty of giving witness to the Risen Lord, going beyond self-referential attitudes, renouncing the desire to stifle God’s gifts and not yielding to mediocrity,” he said. Despite the sweltering Roman heat, thousands of people filled St. Peter’s Square for the audience, which began with Pope Francis circling the square in the popemobile, occasionally stopping to greet pilgrims and even comfort a crying child.

Mexican bishops on migrants: ‘We cannot turn ourselves into that wall’

MEXICO CITY (CNS) — The Mexican bishops’ conference questioned the details of a deal in which Mexico will strengthen security along its southern border with Guatemala and impede the path of migrants fleeing poverty, violence and food insecurity. “We express our concern for the lack of a truly humanitarian reception for our brother migrants, which reflects our convictions regarding the protection of the rights of all human beings equally,” the bishops said in a statement June 10. “Our brother migrants must never be a bargaining chip. No negotiations should be placed above what the Church and civil society have defended for years: not criminalizing migrants nor the defenders of human rights,” the statement said. “If we have rejected as Mexicans the construction of a (border) wall, we cannot turn ourselves into that wall,” which would stop migrants in southern Mexico. Mexico and the United States struck a deal June 7 after U.S. President Donald Trump threatened to slap tariffs of 5 percent on Mexican imports and increase the tariffs until migration through Mexico stopped. In the deal, Mexico agreed to send 6,000 members of its newly formed militarized police to patrol its porous border with Guatemala. It also agreed to take back more asylum-seekers, who would wait in Mexican border cities as their claims proceed in U.S. courts.

LOS ANGELES (CNS) — Using social media, preaching, newspaper columns and letters read at Mass, the Los Angeles archdiocese and California’s other Catholic dioceses planned a special push over the June 15-16 weekend asking Catholics to urge their representatives in the state Assembly to reject a confession bill. S.B. 360 — which passed in the California Senate May 23 in a 30-2 vote — would force priests to disclose information about child sexual abuse that they learn when they are hearing another priest’s confession or when hearing the confession of a co-worker. The bill is expected to have a vote in the lower house, the California State Assembly, in September. “Our lawmakers have good intentions. They want to prevent child abuse,” Los Angeles Archbishop Jose H. Gomez said in a letter he issued June 10 that is to be read at all June 15 and 16 Masses in the archdiocese. “But there is no evidence that this legislation will do that. Instead, it threatens a practice that is essential to our faith and religious identity.” “We need your help to protect this sacrament of the church and to keep confession sacred,” he said. The Catholic Church in California set up a new website, KeepTheSeal.com, which is a hub that gives people easy access to materials about S.B. 360 as well as a way to send emails to their legislators.

PEORIA, Ill. (CNS) — The Peoria Diocese said Bishop Daniel R. Jenky “is overjoyed and elated” that the remains of Archbishop Fulton J. Sheen will be coming home to the diocese following a ruling by the state of New York’s highest court. The New York Court of Appeals June 7 rejected a final appeal from the Archdiocese of New York and the trustees of St. Patrick’s Cathedral, who sought to keep the remains of the famed orator and media pioneer interred at St. Patrick’s, where they have rested since after his death Dec. 9, 1979. According to published reports in The New York Times and other media outlets, the archdiocese said it will now work with Joan Sheen Cunningham — Archbishop Sheen’s niece and closest living relative — and the Diocese of Peoria to arrange for a respectful transfer of the remains to St. Mary’s Cathedral in Peoria. In 2016, Cunningham filed a legal complaint seeking to have her uncle’s remains moved to the cathedral in Peoria, a factor the Diocese of Peoria has maintained is critical for a hoped-for future beatification. Twice, the Manhattan Supreme Court ruled in her favor and twice the New York Archdiocese appealed, halting the transfer. After an evidentiary hearing last year clarifying what Archbishop Sheen’s wishes would have been, Manhattan Supreme Court Justice Arlene Bluth again agreed with Cunningham’s request.

On the fly: Airport chaplains have special ministry, pope says

VATICAN CITY (CNS) — From pilots and passengers to refugees and fast-food workers, the people airport chaplains meet each day all deserve a kind word and an invitation to a relationship with God, Pope Francis said. “Technological advances, a frenzied pace of activity and a constant flow of people all tend to create an atmosphere of anonymity and indifference in airports,” Pope Francis told more than 90 airport chaplains — priests, deacons, religious and laypeople — meeting in Rome June 10-13. Pope Francis told the chaplains the story of a businessman he knew who said he had gone into an airport chapel looking for an outlet to charge his computer. The lay chaplain asked if he needed anything and when the businessman explained why he was there, the chaplain told him he was welcome since the electricity, “like the energy of God,” was there for everyone. As the two kept talking, “that man felt something change in his heart,” the pope said. He bought a Bible and still today, “years later,” continues to read it “to encounter again that Jesus he met in the airport.” 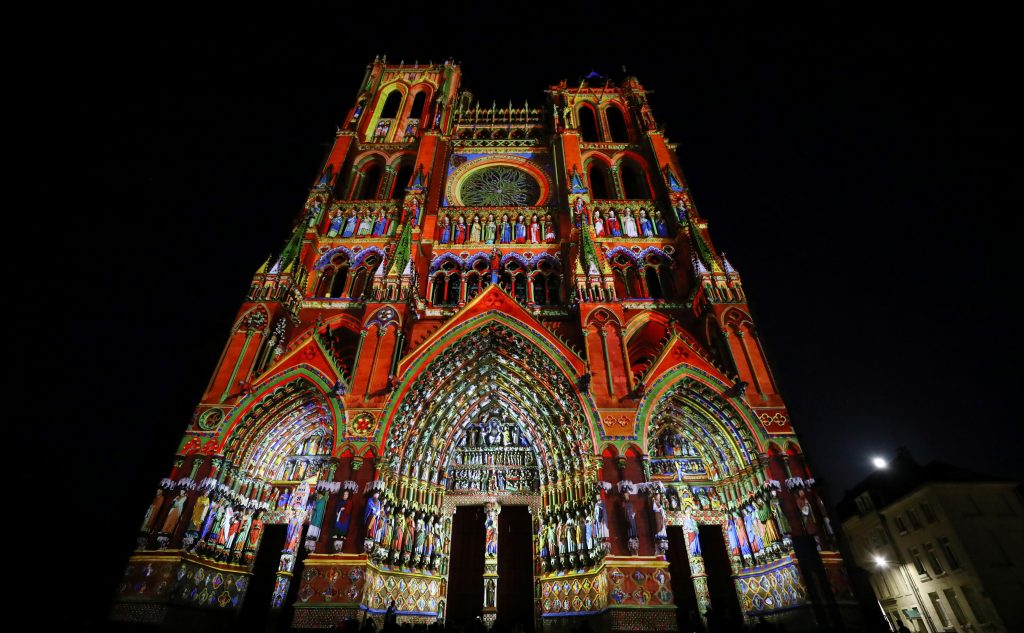 The facade of the Cathedral of Notre-Dame d’Amiens is illuminated during a light show in Amiens, France, June 16, 2019. (CNS photo/Phil Noble, Reuters)