WASHINGTON (CNS) — The chairman of the U.S. bishops’ pro-life committee called on Congress May 28 to preserve the Hyde Amendment in any federal budget proposal and “to work toward a budget that truly builds up the common good of all.” The head of the Catholic Health Association of the United States likewise called on Congress to support “the long-standing prohibition of federal funding for abortion and maintain the Hyde Amendment.” Earlier the same day, President Joe Biden unveiled his proposed budget of $6 trillion for fiscal year 2022 that would include spending to improve and modernize the nation’s infrastructure, provide free pre-K and community college, and increase domestic programs. His plan does not include the Hyde Amendment, which has been included in spending bills since 1976 to prohibit federal tax dollars from directly funding abortion except in cases of rape, incest or when the life of the woman would be endangered. In their respective statements, Archbishop Joseph F. Naumann of Kansas City, Kansas, chairman of the U.S. bishops’ Committee on Pro-Life Activities, and Mercy Sister Mary Haddad, CHA’s president and CEO, said the Biden proposal has a number of provisions to help vulnerable Americans but is remiss in leaving out Hyde, which protects the most vulnerable — the unborn.

EMMITSBURG, Md. (CNS) — They say when one door closes, another door opens. When the National Shrine of St. Elizabeth Ann Seton in Emmitsburg closed its historical buildings to public tours last year due to the pandemic, its team opened a window, a Zoom window. Rather than bringing people to the shrine, they decided to bring the shrine to the people. The solution: virtual tours of the basilica and the historical buildings at the shrine. Launched on Mother Seton’s feast day, Jan. 4, the shrine’s live virtual tours have been a streaming success — so much so shrine officials intend to make the virtual tours a permanent option for those who want to learn about America’s first native-born saint. Over 3,000 people from 21 states have taken a virtual tour of the shrine, and the tours continue to attract school groups and others from as far away as Alaska and Oregon. Virtual or in-person tours can be booked at www.setonshrine.org/virtual-tours. While the shrine is currently open to in-person visitors again, the virtual tours have become an important way of showing how Mother Seton’s experiences as a wife, mother, convert, servant of the poor and teacher make her relatable to people today, shrine officials said.

WASHINGTON (CNS) — In our modern, high-tech society, it turns out some students still have good penmanship. And the winners of this year’s Zaner-Bloser National Handwriting Contest, announced this May, have very good penmanship. Students’ entries were judged by how they wrote: “The quick brown fox jumps over the lazy dog.” That sentence has been the standard criteria in the educational company’s annual handwriting contest for the past 30 years because it contains every letter of the alphabet. The judges examine the letters in each of these nine words carefully, eyeing the shape, size, spacing and slant to determine the best elementary school handwriting across the country. Students in kindergarten through second grade submit manuscript or print entries in the contest, while students in grades three through eight submit cursive entries. They also were asked to answer, in their best penmanship, how their handwriting makes them a better reader and writer and why this is important. To be in the contest, students first had to win best in their grade in their school’s handwriting contest. In this year’s contest, three students from Catholic schools won the grand national championship as the top writers for their grade level. The winners were: Rhys Acas, a kindergarten student at St. Thomas More Catholic School in Elgin, Illinois; Caitlyn Ngo, a fifth grader at St. Edmund Elementary School in Brooklyn, New York; and Soldae Givens, an eighth grader at St. Benedict the Moor School in Pittsburgh.

VATICAN CITY (CNS) — While uncertainty in the world may deter young couples from taking the next big step in their relationships, the vocational call to marriage is a risk worth taking, Pope Francis said. Marriage “is a challenging journey, at times difficult, sometimes even confrontational, but it is worth the risk,” the pope said. “And in this lifelong journey, the husband and wife are not alone: Jesus accompanies them.” In a video message released by the Pope’s Worldwide Prayer Network June 1, the pope offered his prayer intention for the month of June, which he dedicated to “the beauty of marriage.” The pope said that marriage and sharing one’s life “is a beautiful thing. Marriage is not just a ‘social’ act,” he said. “It is a vocation that is born from the heart, it is a conscious lifelong decision that requires a specific preparation. Please, never forget! God has a dream for us — love — and he asks us to make it our own.”

TULSA, Okla. (CNS) — Ahead of a May 30 ecumenical prayer service to recall the Tulsa Race Massacre of 1921, Bishop David A. Konderla said it was important “to pause and reflect on how such an unspeakable horror could take place so that we can avoid any such evil in our own day. It is hard to believe that 100 years ago people could think and act in such a way. It is unthinkable. Still, it happened,” he said. The Tulsa bishop led the service at Holy Family Cathedral with the Rev. Robert Turner of the Historic Vernon Chapel A.M.E. Church, which remains a visual reminder of the massacre of Black people in an area of the city known “Black Wall Street,” Tulsa’s prosperous Black neighborhood of Greenwood. At the time, it was the wealthiest Black community in America. Rev. Turner’s church is the only standing Black-owned structure on Historic Greenwood Avenue from that era. Bishop Konderla said the prayer service was “a time to acknowledge a grave evil that took place and mourn the lives lost and destroyed as well as a time to celebrate the courage of those people who served as shining lights in that dark time to help the victims.” The Tulsa Race Massacre, one of the most severe incidents of racial violence in U.S. history, began May 31, 1921, and lasted for two days. It left somewhere between 30 and 300 people dead, mostly African Americans, and destroyed over 1,400 homes and businesses.

California bishop prays for victims of another ‘senseless’ shooting

SAN JOSE, Calif. (CNS) — San Jose Bishop Oscar Cantú urged prayers for the victims and their families after a gunman opened fired the morning of May 26 at a rail yard operated by the Santa Clara Valley Transportation Authority, or VTA, north of downtown San Jose. At least eight people were dead and several others injured by the shooter, who was later identified by law enforcement as VTA employee Samuel Cassidy, 57. “May God comfort their families and loved ones and bring healing,” the bishop tweeted. “Pray also for all the first responders and law enforcement officers. May shock & grief give way to healing and grace, as we work together to protect the innocent and prevent such senseless acts in the future, so that peace may prevail in our hearts and communities.”

Law enforcement officials said seven victims died at the scene and one at Santa Clara Valley Medical Center in San Jose. The gunman also died at the scene from a self-inflicted gunshot wound. “This is a horrific day for our city, and it’s a tragic day for the VTA family,” San Jose Mayor Sam Liccardo said. “Our heart pains for the families and the co-workers because we know that so many are feeling deeply this loss of their loved ones and their friends.”

ROME (CNS) — Cardinal Charles Bo of Yangon, Myanmar, pleaded for an end to violence after a deadly mortar attack in his country claimed the lives of four people sheltering in a church. In a statement posted on his Twitter account, Cardinal Bo, who also serves as president of the Myanmar bishops’ conference, expressed his anguish over the May 23 attack on “innocent civilians who sought refuge in Sacred Heart Church” in Kayanthayar, a town in eastern Myanmar near the country’s border with Thailand. “The violent acts, including continuous shelling, using heavy weaponry on a frightened group of largely women and children, resulted in the tragic death of four people and wounding more than eight,” he wrote May 25. The Southeast Asian country has been rocked by violence since Feb. 1 after the military seized power and overthrew the elected civilian government. Myanmar had been ruled by the military for more than 50 years before Aung San Suu Kyi’s elected government took office in April 2016. Since the coup, protests against military rule have led to deadly confrontations and have gained attention from world leaders, including Pope Francis, who celebrated a Mass for peace in St. Peter’s Basilica May 16 with Catholics from Myanmar living in Rome.

CAPE TOWN, South Africa (CNS) — About 14,000 people in drought-ravaged southern Madagascar face starvation after exhausting all their options to cope, relief organization representatives said. The utter silence of a room filled with young children “overwhelmed me,” said Arduino Mangoni, deputy country director of the U.N.’s World Food Program. He visited a center where severely malnourished people were being treated in the city of Ambovombe in January. The situation has worsened and “I’ve never seen kids in the state they are in now” in parts of the island nation, 250 miles off the coast of mainland Africa, Mangoni told Catholic News Service May 21. About 1.14 million people in the south of Madagascar face high levels of acute food insecurity, the World Food Program said in a statement. Of these, 14,000 are in the catastrophe category, and this number is expected to double over the next lean season, which begins in October. People are eating cactus leaves and clay they mix with juice from whatever fruit they can find, Mangoni said. Tanja Englberger of Catholic Relief Services told CNS that finding food and water “are the things people talk about” in southern Madagascar. 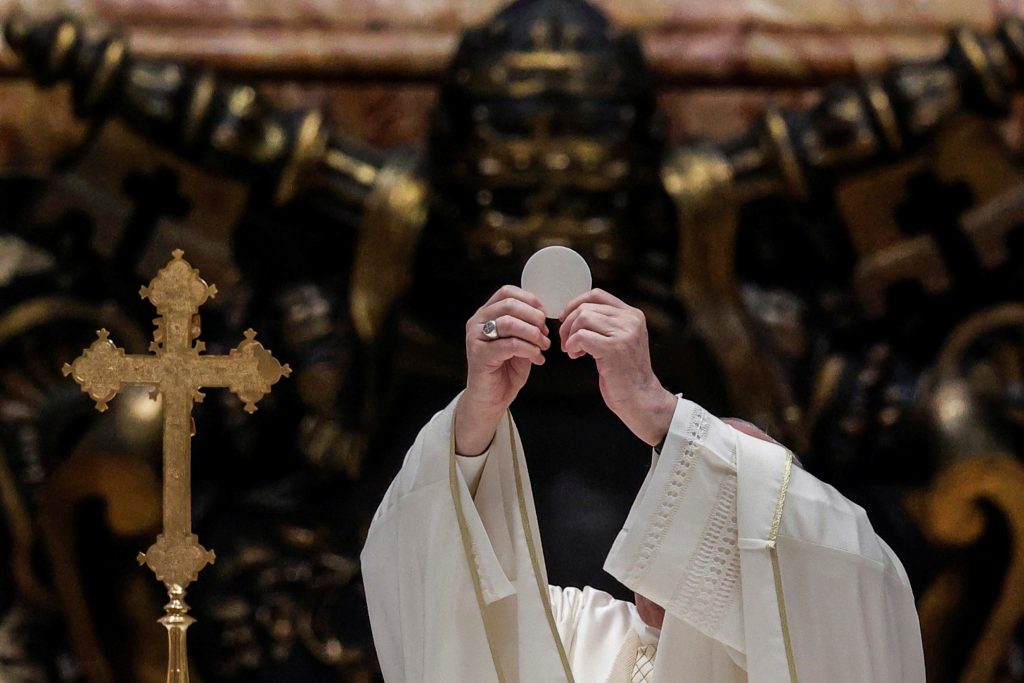 Pope Francis celebrates the Eucharist during Mass on the feast of Corpus Christi in St. Peter’s Basilica at the Vatican June 6, 2021. (CNS photo/Giuseppe Lami, Reuters pool)