WASHINGTON, D.C. (CNS) – A Catholic hospital’s campus in Tulsa, Oklahoma, became the scene of the country’s 233rd mass shooting of the year on June 1, leaving four dead, including a doctor who had treated the gunman for back pain. Tulsa authorities said in a June 2 news conference that the shooter, who committed suicide after the shooting at the St. Francis Health System’s Natalie Medical Building, entered the medical complex armed with a handgun and rifle and opened fire shortly before 5 p.m. inside an orthopedic clinic. Chief Wendell Franklin of the Tulsa Police Department identified Michael Louis as the suspected gunman, saying that he fatally shot himself after shooting several people, including Dr. Preston Phillips, who had treated him for back pain. “He blamed Dr. Phillips for the ongoing pain following the surgery,” Franklin said, adding that police found a letter written on the gunman stating what he was going to do and why. Louis had gone in for surgery in mid-May, was released a few days later but kept complaining of pain. An hour before the shooting, police said, he bought an AR-15 rifle at a pawn shop and headed for the hospital in search of Dr. Phillips. In the process, he killed a patient, another doctor and a receptionist, and left several others injured before shooting himself seconds before police reached him.

LAGOS, Nigeria (CNS) – Violence in Nigeria stemming from the long-lasting Boko Haram insurgency and conflicts among herders and farmers over scarce land resources point to the failure of government to protect all Nigerians, one of the country’s leading archbishops said. Speaking during an online discussion on May 30 sponsored by Aid to the Church in Need, Archbishop Matthew Ndagoso of Kaduna called on government officials to block the influx of armaments into the country as a step to turn around the trend of growing violence across the country. Throughout the program that addressed widespread insecurity and other concerns, Archbishop Ndagoso expressed the importance that security concerns take priority. “Banditry has taken a new dimension in the last three to four years as bandits now use sophisticated weapons to massively destroy villages and their properties, kidnapping for ransom during the day time and at night,” said Archbishop Ndagoso, vice president of the Nigerian bishops’ conference. He blamed the country’s porous borders for the importation of increasingly sophisticated weapons that fuel growing insecurity. He called on the government to control how arms and ammunition were being imported and to prosecute those found to illegally possess arms and ammunition. The attacks by marauding groups have caused people to flee from traditional settlements to camps established by various nongovernmental organizations, he said.

WASHINGTON, D.C. (CNS) – Pope Francis has accepted the resignation of Bishop John M. Quinn of Winona-Rochester, Minnesota, and named as his successor Auxiliary Bishop Robert E. Barron of Los Angeles. Bishop Quinn, who has headed the Diocese of Winona-Rochester for 13 years, is 76. Canon law requires bishops to submit their resignation to the pope when they turn 75. Bishop Barron, 62, is a Chicago native who has been a Los Angeles auxiliary bishop since 2015. He also is the founder of Word on Fire Catholic Ministries. The changes were announced in Washington, D.C. on June 2 by Archbishop Christophe Pierre, apostolic nuncio to the U.S. The Diocese of Winona-Rochester comprises 20 counties in southern Minnesota and has a Catholic population of 132,825.

San Diego bishop says he was ‘stunned,’ ‘humbled’ by being named a cardinal

SAN DIEGO (CNS) – Cardinal-designate Robert W. McElroy told reporters on May 31 that when he learned he is among the 21 new cardinals Pope Francis will create on Aug. 27, “I said a big prayer. I said several prayers because I was stunned and so shocked by this,” said the 68-year-old prelate who heads the San Diego Diocese. He is the only American in the group the pope announced on May 29. “It was prayer in gratitude for my family and the many people who have helped form me over the years and thanksgiving to God for all their roles in my life,” he said during a 25-minute news conference held outside the diocesan pastoral center. After the consistory, he will be among 132 cardinals younger than 80 who will be eligible to vote in a conclave. The number of those older than 80 will be 97, bringing the total number of cardinals to 229. A native of San Francisco, Bishop McElroy is the sixth bishop of San Diego. He was installed on April 15, 2015. Ordained a priest for the Archdiocese of San Francisco on April 12, 1980, he was an auxiliary bishop of the archdiocese from September 2010 until he was named to head the Diocese of San Diego in 2015. “By naming Bishop Robert McElroy as a cardinal, Pope Francis has shown his pastoral care for the Church in the United States,” said Los Angeles Archbishop José H. Gomez, who is president of the U.S. Conference of Catholic Bishops. “I have known and have had the privilege of working with Cardinal-designate McElroy for many years.”

WASHINGTON, D.C. (CNS) – It feels as if there are no silver linings in the cloud of lingering grief and horror that surrounds Uvalde, Texas, as the city began on May 31 to bury the first of 19 children and their two teachers killed a week earlier during a mass shooting at Robb Elementary School. The killings have produced what will be almost two dozen wakes, funeral Masses or church services, and burials throughout the upcoming two weeks in the small city of 15,000. But even in the grief and pain, Archbishop Gustavo García-Siller of San Antonio, who has tended to those grieving in Uvalde, said in his May 29 homily that he’s witnessed a lot of “goodness in people, in the midst of suffering and loss.” And it is toward Jesus, His life and death, that all must look for comfort and guidance in this time of trial, the archbishop said. “After He rises from the dead, Jesus does not return to take revenge on those who murdered or abandoned Him. His first greeting to His disciples is: ‘Peace be with you,’” he said. And if there’s a place that needs peace, it’s Uvalde, where questions, as well as indignation, linger about efforts made or not made to stop the shooter.

Pope asks Mary, Queen of Peace, to end war in Ukraine and everywhere

ROME (CNS) – After setting white flowers at a statue of Mary, Queen of Peace, Pope Francis prayed the rosary and asked Mary to intercede to bring peace to Ukraine and to every place in the world torn by violent conflict. Pope Francis usually ends the month of May, traditionally dedicated to Mary, by leading the recitation of the rosary at the Vatican. Given Russia’s ongoing war on Ukraine, he chose to go to Rome’s Basilica of St. Mary Major and the statue Pope Benedict XV had placed there in 1918 as a sign of people’s prayers that Mary would intercede to end World War I. Introducing the prayer on May 31, the feast of the Visitation, the pope reminded Mary that last year in the Vatican Gardens, he had asked her help in ending the COVID-19 pandemic, giving strength to the sick and the medical personnel caring for them, giving comfort to the dying and drying the tears of those in mourning. “This evening, at the end of the month especially consecrated to you, we are again before you, Queen of Peace,” the pope said. “Grant us the great gift of peace; quickly end the wars, which have been raging for decades now in various parts of the world, and which has now invaded even the continent of Europe,” the pope prayed. “We are aware that peace cannot be the result of negotiations alone nor a consequence of political agreements alone but is above all an Easter gift of the Holy Spirit.” 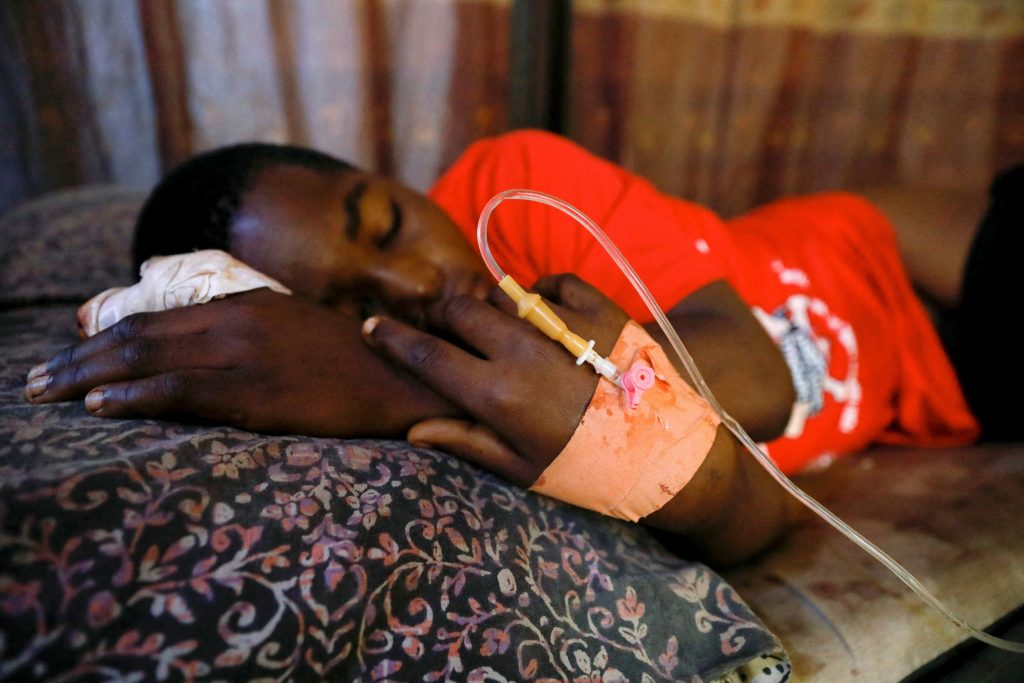 Adetunji Henry, 15, one of the victims of the attack by gunmen during Pentecost Mass at St. Francis Xavier Church, receives treatment at the Federal Medical Centre in Owo, Nigeria, June 6, 2022. Reports said at least 50 people were killed in the attack. (CNS photo/Temilade Adelaja, Reuters)