TERRE HAUTE, Ind. (CNS) — On the grounds of the Sisters of Providence of St. Mary-of-the-Woods near Terre Haute, news of the execution pierced the quiet on the morning of July 14. The bells of the Church of the Immaculate Conception there are tolled after any execution in the nation, explained Providence Sister Paula Damiano. But that morning, “for the first time in 17 years,” she said, “a sister tolled the bells following (a) federal execution” at the Federal Correctional Complex. The bells announced the 8:07 a.m. death of Daniel Lewis Lee. Less than 24 hours before, a temporary stay of all scheduled federal executions was announced by the U.S. District Court of the District of Columbia due to evidence that the drug to be administered causes severe pain. The decision was immediately appealed to the U.S. Supreme Court by the federal Department of Justice. At 2 a.m. July 14, the Supreme Court overturned the ruling. Lee was executed and pronounced dead six hours later, according to a Reuters report. In sharing her reaction with The Criterion, newspaper of the Indianapolis archdiocese, Sister Paula said the sisters “believe that forgiveness is vital to faith. We are called to forgive every day.”

WASHINGTON (CNS) — War, what is it good for? For Edwin Starr, the answer was “absolutely nothin’” — although “somethin’” might be a better answer, since he had a No. 1 hit with the tune in 1970. But for Dominican Father Humbert Kilanowski, he’s got a different answer, because he’s asking a different question. Father Kilanowski, a mathematics professor at Providence College in Rhode Island, has been a baseball stats guy since his freshman year in high school, when he was a student manager of his school’s baseball team. “I played up to eighth grade, but I wasn’t any good,” he confessed. Back then, he remembered, the new big-deal stats were WHIP and OPS. For the uninitiated, WHIP stands for walks plus hits per inning pitched, a measure of a pitcher’s ability to keep runners off base. OPS stands for on-base percentage plus slugging percentage; the former gauges how often a player gets on base per plate appearance, and the latter calculates how many bases the batter collects per at-bat. Ordained in 2018, Father Kilanowski not only teaches, but helps out with campus ministry and with a Dominican Third Order group in Rhode Island. He also learned, to his delight, the order has a house on Cape Cod, which gave him a chance to see about a dozen games last year in the Cape Cod League. The league is one of several “collegiate” leagues around the United States where college ballplayers who think they have a chance in pro ball spend a couple of months in the summer to sharpen their skills. It also gives hitters experience with wood bats; virtually all school and amateur baseball today is played with less expensive and longer-lasting aluminum bats. Which brings us to WAR, which stands for wins above replacement. In the big leagues, its computations are meant to judge a player’s skill over that of his replacement — typically a minor leaguer who would need to be called up to take his spot on the roster. But WAR wouldn’t work right in the amateur ranks. For one thing, they haven’t even played in the minors, let alone have a chance to get called up to the majors. With Cape Cod League statisticians supplying him the 2019 season’s data, Father Kilanowski made some modifications to account for the level of skill and the shorter season, among other things. His results were published in in early July in the Baseball Research Journal, the annual publication of the Society for American Baseball Research.

GREEN BAY, Wis. (CNS) — Cassie Everts remembers the day in 2011 when she mourned in silence after experiencing her third miscarriage. “I remember sitting at Mass at the Easter Vigil and the priest gave this beautiful homily on how, after every Good Friday — no matter what we are going through in our life — we have Easter Sunday,” she said. His words left her wondering about her own life. “I just remember gripping my husband’s hand and thinking, ‘Will we ever see our Easter Sunday? Will we ever have that joy?’” she said. “I just felt like my life is Good Friday after Good Friday.’” Everts and her husband, Aaron, suffered through five “Good Fridays,” losing five children by miscarriage. Each loss caused her to wonder where God was in her life, she said, yet the torment eventually gave way to healing. It also led Everts to co-write a book with Patrick O’Hearn, “Nursery of Heaven: Miscarriage, Stillbirth and Infant Loss in the Lives of the Saints and Today’s Parents” (Contemplative Heart Press, 2019), available online at Amazon and Barnes and Noble. It includes stories of saints and everyday Catholics who have lost babies, and it includes prayers and blessings for pastors, families and friends to help couples who have lost a child.

CLEVELAND (CNS) — Americans participating in a study of attitudes toward abortion said they do not typically discuss it, find the labels “pro-life” and “pro-choice” inadequate, and generally do not consider abortion a “desirable good” for society, according to a University of Notre Dame study. The study also reported that participants believe abortion is intimately personal rather than a political issue as often portrayed in public discussions. The findings emerged in a report released July 15 by the Indiana Catholic university. A research team led by sociologist Tricia Bruce, who is affiliated with the university’s Center for the Study of Religion and Society, also found the participants had never been asked about nor been listened to regarding their views on abortion. Bruce told Catholic News Service the study was designed to gather information from participants in interviews that lasted an average of 75 minutes. Overall, 217 people, described as “ordinary Americans,” were interviewed from March through August 2019 in an effort to assess their attitudes toward abortion. The full 60-page study, titled “How Americans Understand Abortion,” can be found online at https://bit.ly/2ZwMcmL.

ATLANTA (CNS) — Archbishop Gregory J. Hartmayer of Atlanta said July 15 he was “deeply disappointed that a federal judge struck Georgia’s so-called “heartbeat law” on abortion. “All life is precious from the moment of conception until its natural end. As a people of faith, we must defend and protect life in all its stages,” he said in a statement, adding he was grateful Georgia Gov. Brian Kemp “has vowed to appeal this court decision and will support his efforts.” On July 13, District Judge Steve C. Jones of the U.S. District Court for the Northern District of Georgia made permanent the temporary block he had put on the law last fall. It would have banned abortions once a fetal heartbeat is detected, which is around six weeks. It had exceptions to save the life of the mother and in the case of rape and incest if a police report is filed. It also made exceptions to allow abortions when a fetus has serious medical issues. In his ruling Jones said the law infringed upon constitutional rights, including those established by the 1973 Supreme Court decision Roe v. Wade and the 1992 decision Planned Parenthood v. Casey.

VATICAN CITY (CNS) — Pope Francis advanced the sainthood causes of two women and three men, including an Italian laywoman who was once believed to be demonically possessed because of her violent convulsions after drinking unsafe water. The other decrees approved by Pope Francis July 10 recognized the heroic virtues of: Italian Jesuit Father Eusebio Francesco Chini, who served as a missionary in 18th-century Mexico; Father Mariano Jose de Ibarguengoitia y Zuloaga, a Spanish priest from Bilbao, Spain, who help found the Institute of the Servants of Jesus; Mother Maria Felix Torres, founder of the Company of the Savior as well as the Mater Salvatoris Schools; and Angiolino Bonetta, a layman and member of the Silent Workers of the Cross Association, an apostolate dedicated to the sick and the disabled. 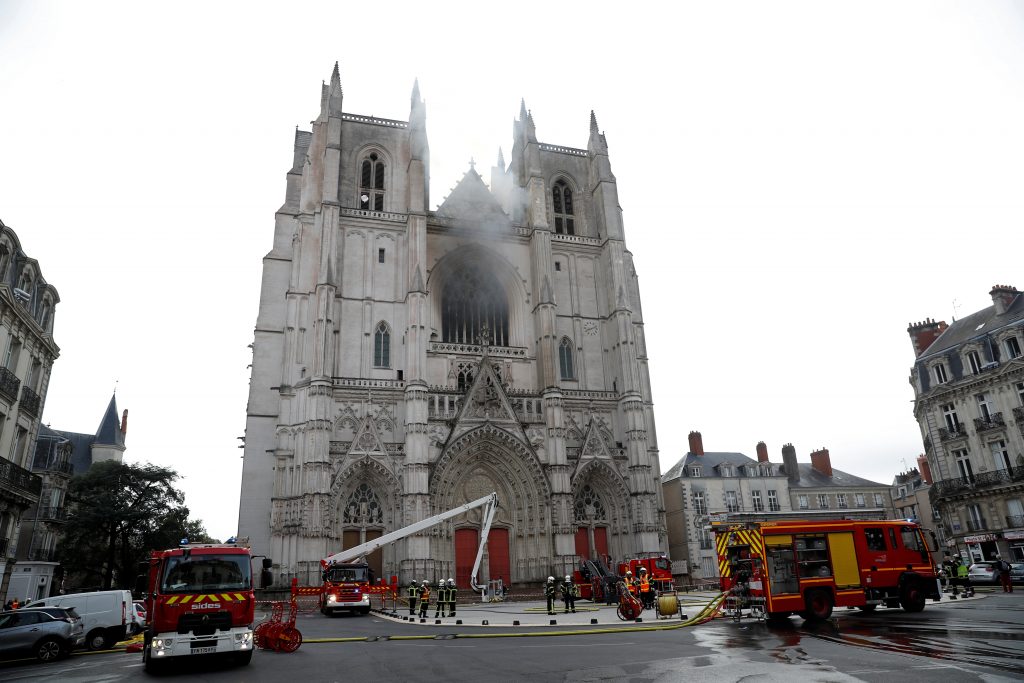 French firefighters gather at the scene of a blaze at the Cathedral of Sts. Peter and Paul in Nantes July 18, 2020. Police are investigating the incident as arson because the fire started in three different places. (CNS photo/Stephane Mahe, Reuters)