COPAN, Honduras (CNS) — Nicaraguan bishops and clergy were attacked by armed groups aligned with the government July 9 as violence in the Central American country escalated and affected the Catholic Church, which has provided humanitarian assistance in its parishes and has tried to diffuse a worsening political crisis through dialogue. Cardinal Leopoldo Brenes Solorzano of Managua and his auxiliary, Bishop Silvio Jose Baez, and Archbishop Waldemar Stanislaw Sommertag, the apostolic nuncio, were among clergy from Managua pummeled as they attempted to protect St. Sebastian Basilica in the city of Diriamba from an incursion by a pro-government mob. Bishop Baez and at least one other priest were injured. Journalists also were attacked and had cameras and other equipment stolen. The bishops and clergy also tried to free anti-government protesters inside the church as masked individuals and mobs outside chanted “murderers” at the prelates. Pro-government media, meanwhile, accused the church of allowing weapons to be stored inside its properties. “I was injured, punched in the stomach, they took my episcopal symbols away from me, and verbally attacked me,” Bishop Baez tweeted, along with a picture of a gash on his arm and blood-stained habit. “I’m OK, thank God. The basilica is free and so are those who were inside. We have felt brutal force against our priests. We had gone to (the) parish to console our priests, to accompany them in this suffering and were attacked,” he said. The attack on the bishops came as Nicaraguan President Daniel Ortega sent police and paramilitaries to counter protesters calling for his ouster.

ROME (CNS) — The gap between philanthropic donations and what governments in developing countries can spend on projects to improve the lives of their people is the place where impact investing can make all the difference, said speakers at a Vatican conference. Regular access to clean water is a challenge for some 2.1 billion people around the world, and Catholic Relief Services, the U.S. bishops’ overseas relief and development agency, has launched an impact investment project designed to help local communities improve their water and sanitation service. At the third Vatican Conference on Impacting Investing July 10, CRS officially launched Azure, a “blended financial facility” — using both investment capital and grants — to bring regularly flowing pipes of clean water to people in rural areas of El Salvador. “People in developing countries are able and willing to pay for reliable water services,” Paul Hicks, director of water and land restoration for CRS, told the Vatican conference. But loans and grants are needed to dig the wells, create reservoirs, buy storage tanks and lay miles of pipes. That’s where impact investing comes in, Hicks said. Azure Source Capital is a project of CRS and the Inter-American Development Bank’s Multilateral Investment Fund and is managed by Total Impact Capital, an impact investing firm located in Bethesda, Maryland. Azure Technical Services is the operational arm of the project and works with local companies to provide hydraulic engineering, project management and business and financial expertise to local water service providers.

VATICAN CITY (CNS) — Pope Francis has named a lay Italian journalist with decades of experience in print, radio and television broadcasting to head the Vatican’s Secretariat for Communication. Paolo Ruffini, 61, who headed the Italian conference of Catholic bishops’ TV and radio network, was named prefect of the dicastery July 5, making him the first layperson to head such a high-level Vatican dicastery. He succeeds Italian Msgr. Dario Vigano, who resigned as prefect in March after a controversy involving the use and photographing of a letter from retired Pope Benedict XVI. Born in Palermo in 1959, Ruffini received a degree in law at Rome’s La Sapienza University. He worked for a number of major Italian newspapers beginning in 1979, then began working for radio news programs in 1996. He started working in television news in 2002. He served as the head of the Italian Conference of Catholic Bishops’ television and radio stations — TV2000 and Radio InBlu, from 2014 to 2018.

NAIROBI, Kenya (CNS) — Ethiopia’s Catholic Cardinal Berhaneyesus Souraphiel commended the Ethiopian and Eritrean governments for signing a peace accord. Ethiopian Prime Minister Abiy Ahmed and Eritrean President Isaias Afwerki signed the peace pact in the Eritrean capital, Asmara, July 9. Cardinal Souraphiel told Catholic News Service July 10: “This is a historic step taken by the prime minister of Ethiopia within the first 100 days since he took office. The joyous reception of Eritreans to the Ethiopian prime minister and his delegation shows that this has been the prayers of the people. It is very pleasing to the Catholic Church that the prayers of the people of both countries have been answered.” For decades, the two countries have been at loggerheads on issues that include the border. An estimated 80,000 people are believed to have been killed between 1998-2000 over a fierce border conflict. However, after the two countries signed a U.N.-brokered border agreement in 2000, they failed to implement it. Cardinal Souraphiel said the “steps taken so far by both governments prove that Africans have the wisdom to solve their problems themselves. The Catholic Church will continue to pray both for Ethiopia and Eritrea.” 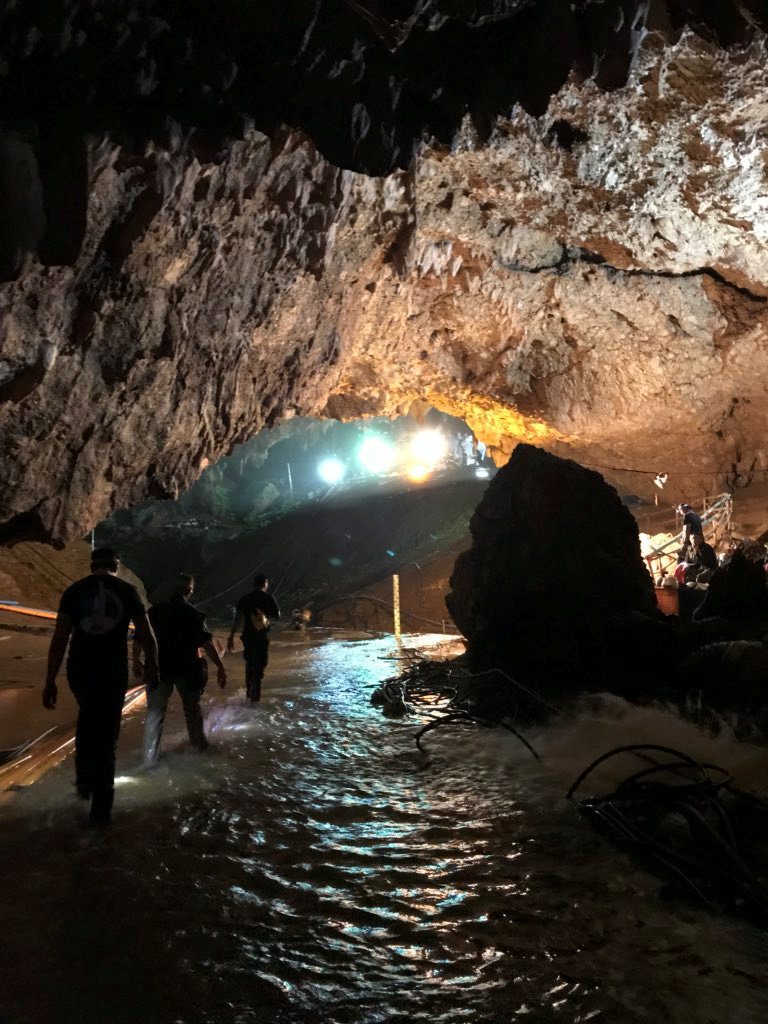 Rescue personnel walk in the Tham Luang cave complex during a July 9 mission to evacuate the remaining members of a soccer team trapped inside in Chiang Rai, Thailand. The last remaining members of the Wild Boars soccer team and their coach were pulled out of the flooded cave, bringing an end to a nearly three-week ordeal that prompted a huge international rescue effort. (CNS photo/Twitter @elonmusk/via Reuters)

Pope attends funeral of cardinal who announced to world his election

VATICAN CITY (CNS) — Pope Francis attended the funeral Mass and presided over the final commendation of Cardinal Jean-Louis Tauran, the French cardinal who led the Vatican’s outreach to other religions and who had announced to the world his election as pope five years ago. Seated to the right of the closed casket with his head bowed in solemn prayer, the pope attended the entire ceremony in St. Peter’s Basilica July 12. Typically, the pope arrives at the end of a cardinal’s funeral Mass to officiate over the rites of final commendation. Pope Francis gave the final blessing, sprinkling with holy water and incensing Cardinal Tauran’s casket, upon which was laid an open book of the Gospels. Members of the College of Cardinals, the diplomatic corps, Vatican officials, dignitaries and guests, including those of other faiths, gathered for the funeral of the late cardinal, who had spent more than 10 years as president of the Pontifical Council for Interreligious Dialogue and decades in the Vatican’s diplomatic service. Members of the Sikh and Muslim communities, along with other mourners, paid their respects before the cardinal’s casket at the end of the service. Cardinal Angelo Sodano, dean of the College of Cardinals and former Vatican Secretary of State, celebrated the funeral Mass. In his homily, he said he personally witnessed Cardinal Tauran’s “great apostolic spirit” after working with him for so many years.

WASHINGTON (CNS) — Some of the migrant children under age 5 separated from their families by the government were reunited with loved ones July 9 with help from Catholic organizations. About two dozen families in all were brought back together on that date with help from the U.S. Conference of Catholic Bishops’ Migration and Refugee Services, Catholic Charities USA and a network of other agencies from around the country. In all, the Catholic agencies will help reunite 55 families by mid-July and provide short-term care, such as food and shelter, said Bill Canny, executive director of MRS. “What we’re trying to do is give people who have had a dose of bad, we’re trying to give them a dose of good,” said Canny in a July 12 interview with Catholic News Service. “Protection of families is a foundational element of Catholic social teaching and this moment calls on all people of goodwill to lend a hand to reunite these children with their parents,” the two Catholic organizations involved said in a joint statement issued the same day by MRS and Catholic Charities USA. Canny said the organizations are trying to raise funds for the reunification effort and anyone wanting to help can donate to Catholic Charities USA, www.catholiccharitiesusa.org.