CRS gradually restores services in Haiti amid series of crises

CLEVELAND (CNS) — A series of debilitating crises in recent weeks — from a surge in COVID-19 cases to the assassination of a president — has left Haiti reeling again in uncertainty and forced Catholic Relief Services to curtail its outreach efforts. “As I told someone, this is like the perfect storm. Everything is coming together to put people on their knees,” Akim Kikonda, CRS’ country representative in Haiti, told Catholic News Service July 14. Beyond the pandemic, Kikonda pointed to rising gang violence in neighborhoods primarily in and around Port-au-Prince, the capital, and damage from Tropical Storm Elsa, which swept through southern Haiti and the Dominican Republic July 3, tearing off roofs, downing trees and flooding farms. Four days after the storm, in the early hours of July 7, 28 foreign mercenaries, including specially trained Colombian soldiers, assassinated President Jovenel Moïse, creating a deeper vacuum in the country’s governance. Kikonda said any one of the occurrences would pose serious challenges to daily life, but that the back-to-back crises the country is facing is paving the way to a deepening humanitarian crisis. The number of reported cases of COVID-19 in the Western Hemisphere’s poorest nation surged in June, to its highest level in a year, according to data compiled by the Johns Hopkins University Coronavirus Resource Center.

WASHINGTON (CNS) — In eliminating the Hyde Amendment in spending bills for fiscal year 2022, the “pro-abortion” Democrats on the House Appropriations Committee “destroy over 40 years of previously unprecedented bipartisan support for a measure aimed at saving human lives,” said the president of National Right to Life. “This is a campaign by pro-abortion Democrats to ensure that abortion is available on demand, for any reason, at any time and paid for with taxpayer dollars,” Carol Tobias said. She made the comments late July 15 after the committee marked up the legislation. “The most egregious aspect of the bill presented today is the removal of the Hyde Amendment, which protects lives and prohibits taxpayer funding of abortion,” said Rep. Tom Cole, R-Okla., during the markup session. Hyde first became law in 1976 to prohibit federal funds appropriated through the Labor Department, the Health and Human Services Department and related agencies from being used to cover abortion or fund health plans that cover abortion except in cases of rape, incest or when the life of the woman would be endangered. Hyde has been reenacted in spending bills every year since it was first passed. The USCCB’s Secretariat of Pro-Life Activities has an online petition people can sign, www.notaxpayerabortion.com, to urge Congress not to let federal funds be used to pay for abortions.

Maryland parish, Catholic schools rooting for their own Olympic swimmers

WASHINGTON (CNS) — It may seem like a coincidence that two U.S. Olympic teammates bound for the Summer Olympics in Tokyo attended the same Catholic elementary school and high school. But for soon-to-be three-time Olympian Katie Ledecky, 24, and Phoebe Bacon, 18, swimming in her first Olympics, their similarities represent many shared, God-given talents that drive them to persevere and excel. Ledecky’s and Bacon’s paths have intertwined for several years while they attended Little Flower School, swam for the high school team at the Stone Ridge School of the Sacred Heart and have been parishioners at Church of the Little Flower, all in Bethesda, Maryland. Ledecky graduated from Stone Ridge in 2015 and Bacon graduated in 2020. Currently, the two are in Honolulu with the U.S. Olympic Swim Team preparing for the swimming events taking place July 24 through Aug. 1. The opening ceremony is July 23 and the Games end Aug. 8. “We’ve had the honor and joy of watching Katie and Phoebe evolve as athletes for a very long time,” said Catherine Ronan Karrels, head of Stone Ridge School. “When they compete in Tokyo, the world will witness their incredible strength as the athletes they are today, but we’ve had the unique opportunity to watch step by step, year over year, what it takes to become an Olympian.” Karrels said she admires the remarkable fortitude and commitment both athletes have put into their swimming from a very young age.

WASHINGTON (CNS) — Accompaniment is the key to addressing modern catechetical challenges, a method that’s at the center of a new entity being created under the direction of Bishop Frank J. Caggiano of Bridgeport, Connecticut, chairman of the U.S. Conference of Catholic Bishops’ Subcommittee on the Catechism. A proposal to create an Institute for the Catechism was presented at the bishops’ spring meeting in June, which took place virtually. Rather than a physical structure, the institute will be a new process by which publishers of catechetical materials and the developers of catechetical content will work with the subcommittee to address modern challenges to catechesis. The second main component of the institute will be a yearly, in-person training conference and retreat for diocesan catechetical leaders, with a separate track for publishers. Current challenges to effective catechesis are many, Bishop Caggiano said, including the fact that parish resources often don’t allow for extensive formation of catechists and that catechetical resources in Spanish lack crucial cultural considerations. Other barriers to effective catechesis include the influence of the secular world, the strain families are under, and the fact that many parents, teachers and catechists were part of a generation that was not well catechized. The bishop presented the idea of launching the institute on the last day of the bishops’ June 16-18 virtual spring assembly, but it has been in discussion since 2017.

WASHINGTON (CNS) — Many people may not think about religious repression since it doesn’t happen in the United States. For those who may argue that it does, then it doesn’t happen on the scale and terror of those living in countries with authoritarian regimes. Testimony from survivors of religious repression punctuated the July 13-15 International Religious Freedom Summit in Washington. One of the most compelling first-person accounts came from Joy Bishara, who grew up in the northern Nigeria town of Chibok, as a member of the Church of Christ. Bishara was one of the 276 Christian teen girls abducted by the Islamist terror group Boko Haram from their school in 2014. She managed to escape her captors. Today, there are still 112 girls whose whereabouts remain unaccounted for. “Whatever happened to the Chibok girls in 2014 was just the beginning,” Bishara said. “When you go to the government to complain, they say they are going to do something about it, but they never do. … All The Muslim people get all the help that they need from the government, and Christians never get any help. Bishara said of herself and her fellow students, “We had committed no crime. Our crime was going to school and getting an education. Education is a taboo, so school is a taboo.” Bishara is now studying in the United States.

MIAMI (CNS) — A former U.S. ambassador to the Vatican said unrest in Cuba — something the world has seen before — is translating into a recipe for disaster this year due to added pressures from the COVID-19 pandemic. There are increasing signs that the newest wave of coronavirus is upending life in poor nations with low vaccination rates and something the world is beginning to witness in Cuba, Haiti and elsewhere. The result may have unpredictable consequences such as mass migration, according to Miguel H. Díaz, a Cuban-born theologian raised in Florida and selected by President Barack Obama as the United States’ ninth ambassador to the Holy See, serving from 2009 to 2012. “One of my concerns that has happened before is that internal pressures will cause desperate people to seek desperate measures and take the seas, but the government may also encourage that as a way to relieve pressure — and this has happened before,” Díaz said regarding Cuba in a July 13 phone call. News reports said the unprecedented protests in Cuba July 11 took place not only in Havana but other Cuban cities. They have been mirrored by ongoing street protests throughout South Florida as recently as July 13. 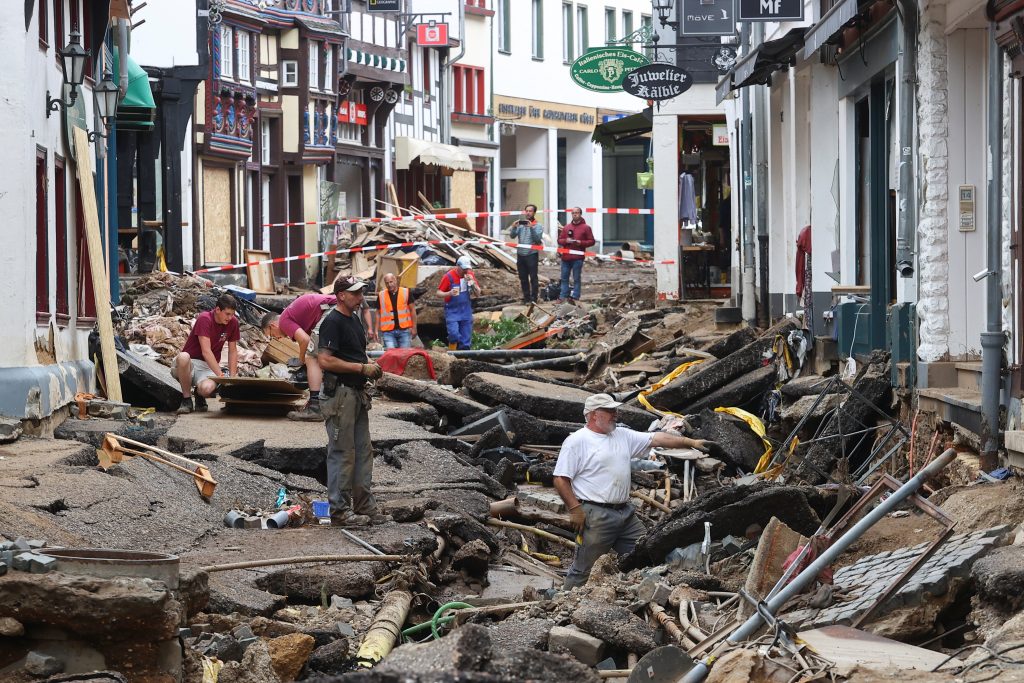 People look over an area affected by flooding in Bad Münstereifel Germany, July 19, 2021. More than 195 people have been confirmed dead, while hundreds more remained missing after a record rainfall caused dams to burst and rivers to overflow into towns and streets across western Germany, Belgium, as well as parts of the Netherlands, Switzerland and northern France. (CNS photo/Wolfgang Rattay, Reuters)