CHARLESTON, S.C. (CNS) — While most of the country was winding down from its Independence Day festivities, another type of celebration was underway at the National Right to Life Convention July 5-6 in Charleston. Pro-life advocates from around the U.S. spent two days celebrating the right to life, an unalienable right first stated in the Declaration of Independence. Participants also focused on learning strategies and best practices to continue defending that right in all its forms. Nationally known speakers and workshops on a wide range of topics were available, including legal developments regarding abortion, euthanasia, pro-life social media, surviving an unplanned pregnancy, special needs adoption and prenatal testing. The latter was the focus of a moving closing ceremony July 6, which included the celebration of Mass by Bishop Robert E. Guglielmone of Charleston. During the closing speeches, it was the words of Kurt Kondrich, father of Chloe Kondrich, his 16-year-old daughter with Down syndrome, that moved conference attendees to tears. Kondrich, who is a former police officer, realized after Chloe was born that God had a new path for him: educating the country on Down syndrome and prenatal testing. “We need to empower people so that they are armed with the knowledge of what to do with the results of their prenatal test, rather than listening to a doctor that tells them just to terminate,” he said. Kondrich calls himself a “dad-vocate” for Down syndrome children.

BLOOMFIELD HILLS, Mich. (CNS) — Though he achieved fame as an automobile executive and leader of a private initiative to renovate the Statue of Liberty, Lee Iacocca valued family above all else in life, said a priest who eulogized him during his funeral Mass July 10. “For decades, Lee’s feet and hands moved mountains,” Msgr. Howard Lincoln told mourners who gathered for the Mass at St. Hugo of the Hills Church in suburban Detroit, where Iacocca was a member before retiring to California. “Lee always seemed to me to never really be down. Somehow, even at the darkest hours, I think he knew somehow even Chrysler would work out.” Msgr. Lincoln, pastor of Sacred Heart Church in Palm Desert, California, Iacocca’s parish in his retirement years, said the business leader “knew that this life was his once in a lifetime opportunity and he wanted his life to matter.” “He was an elevating influence for our parish. I think he saw the importance of being kind and courteous to everybody. … ‘Yes,’ he said, ‘I’ve had a wonderful and successful career but next to my family, it doesn’t matter at all,” Msgr. Lincoln recalled. Msgr. Anthony Tocco, pastor of St. Hugo of the Hills, presided at the funeral Mass. Iacocca died July 2 at his home in Bel Air, California, at age 94 of complications from Parkinson’s disease. He was buried in Troy, Michigan, following the funeral Mass.

YOUNGSTOWN, Ohio (CNS) — The leukemia that Bishop George V. Murry of Youngstown suffered from last year has returned. It is not as intense as last year, but it needs attention, according to an announcement from the diocese. Bishop Murry entered the Cleveland Clinic July 3 for a 28-day program of chemotherapy. “The goal will be to prepare him for a bone marrow transplant in September, which his doctors believe is the best way to prevent another occurrence of the cancer,” the diocese said. During his time in the hospital, diocesan officials are meeting with him weekly to discuss diocesan matters, including Msgr. Robert J. Siffrin, vicar general and moderator of the curia; Msgr. Peter Polando, judicial vicar and director of canonical services; Msgr. John A. Zuraw, chancellor and vicar for pastoral education and services; and Father John Jerek, vicar for clergy. “The bishop humbly asks that the people of the diocese pray for him and promises his prayers in return,” the diocesan announcement said. Those wishing to submit a message or offer up a prayer request for Bishop Murry can submit them via email to [email protected] and “the diocese will collect them all and deliver them to Bishop Murry.”

NATIONAL HARBOR, Md. (CNS) — Just before the July 6 closing Mass for the Archbishop Lyke Conference that seeks to enrich liturgies and ministries and promote evangelization at parishes serving Black Catholics, Andrew Lyke reflected on the legacy of his late uncle for whom the conference was named. Archbishop James P. Lyke, who was a Franciscan, served as a parish priest in Memphis, Tennessee, as an auxiliary bishop in Cleveland and as the archbishop of Atlanta before he died of cancer in 1992. Eight years earlier, he had coordinated the writing of “What We Have Seen and Heard,” a pastoral letter of the nation’s black bishops, and he also coordinated the African American Catholic hymnal “Lead Me, Guide Me,” published in 1987. “He was one that loved the liturgy,” Andrew Lyke said in an interview with the Catholic Standard newspaper of the Archdiocese of Washington. “He believed very strongly that when we bring the drama of the Roman liturgy with the passion of black spirituality, it’s just a powerful experience.” The Archbishop Lyke Conference began in 2004. This year’s conference was held July 2-6 near Washington, in National Harbor. The gathering’s theme was “Every Knee Shall Bend: Reconciliation, Black and Catholic.” Workshops tied that theme into a variety of topics, including Black spirituality and Negro spirituals. Some programs were offered for young adults, music ministers and liturgical dancers.

WASHINGTON (CNS) — Catholics hear hymns in church, but hardly ever on the radio. Now they can augment their weekly diet of hymnody through a new audio web streaming service called Great Catholic Music. The service launched March 1, just before Lent, and plays a mix of pre-and post-Vatican II hymns and liturgical music all day, every day. “The response so far has been absolutely amazing,” said program director Michael Roberts in an interview with Catholic News Service July 11. “The first night that we launched we received an email from someone in Santa Barbara, California, saying, ‘Thank you so much.’” Great Catholic Music is a project of the Living Bread Radio Network, a group of Catholic radio stations in northeast Ohio. Anybody who remembers listening to hit-music formats regardless of genre will recall how the most popular songs of that moment seemed to be played every couple of hours. Great Catholic Music plays favorites, too, but not nearly that obsessively. What constitutes “heavy rotation” is 100 or so “songs we’ve been singing for decades: ‘You Are Mine,’ ‘Blest Are They,’ Michael Joncas stuff, the St. Louis Jesuits. We Googled ‘top Catholic songs,’ and we found several lists compiled by several organizations,” Roberts said. Great Catholic Radio — www.greatcatholicmusic.com — also takes breaks for psalms, Scripture readings and prayers.

FARMINGTON HILLS, Mich. (CNS) — Mercy Sister Mary Maurita Sengelaub, a nurse who entered religious life and eventually led what is now called the Catholic Health Association of the United States, died July 6 at age 101 at McAuley Life Center, a retirement home run by her order, in the Detroit suburb of Farmington Hills. A funeral Mass was celebrated July 11 at the Mercy Center Chapel in Farmington Hills. She was chosen in 1970 to lead the CHA, then known as the U.S. Catholic Hospital Association. She became the first woman religious — indeed, the first woman — and the first noncleric to lead the organization. In the early 1970s she conceived of, and, with the help of the CHA staff, implemented, a leadership development program that is credited with helping health care sponsors and executives bring stand-alone hospitals and long-term care facilities together as systems. Sister Sengelaub resigned as CHA president in 1977 for health reasons. After recovering, she was chosen to serve on her religious community’s Detroit Provincial Council, a post she had held earlier in her vocation. In 1988, at age 70, she moved to Australia to help the Sisters of St. John of God structure that country’s first Catholic health system. She returned to the United States to work as justice coordinator for the Mercy sisters’ Detroit province 1990-95 and entered semiretirement.

VATICAN CITY (CNS) — “Every life is valuable, always,” Pope Francis tweeted after offering prayers for Vincent Lambert, a 42-year-old French man who died July 11, nine days after doctors stopped providing him with nutrition and hydration. “May God the Father welcome Vincent Lambert in his arms,” the pope’s tweet said. “Let us not build a civilization that discards persons whose lives we no longer consider to be worthy of living.” The Pontifical Academy for Life called the death of Lambert a “defeat for our humanity,” and Guinean Cardinal Robert Sarah, prefect of the Congregation for Divine Worship and the Sacraments, called Lambert a “martyr” in a tweet. Lambert, who suffered serious brain damage more than 10 years ago, died after years of court battles divided his family. Alessandro Gisotti, interim director of the Vatican press office, said in a statement, “With pain we heard the news of the death of Vincent Lambert. We pray that the Lord will welcome him into his home, and we express our closeness to his loved ones and all those who were committed to assisting him with love and dedication to the end.” 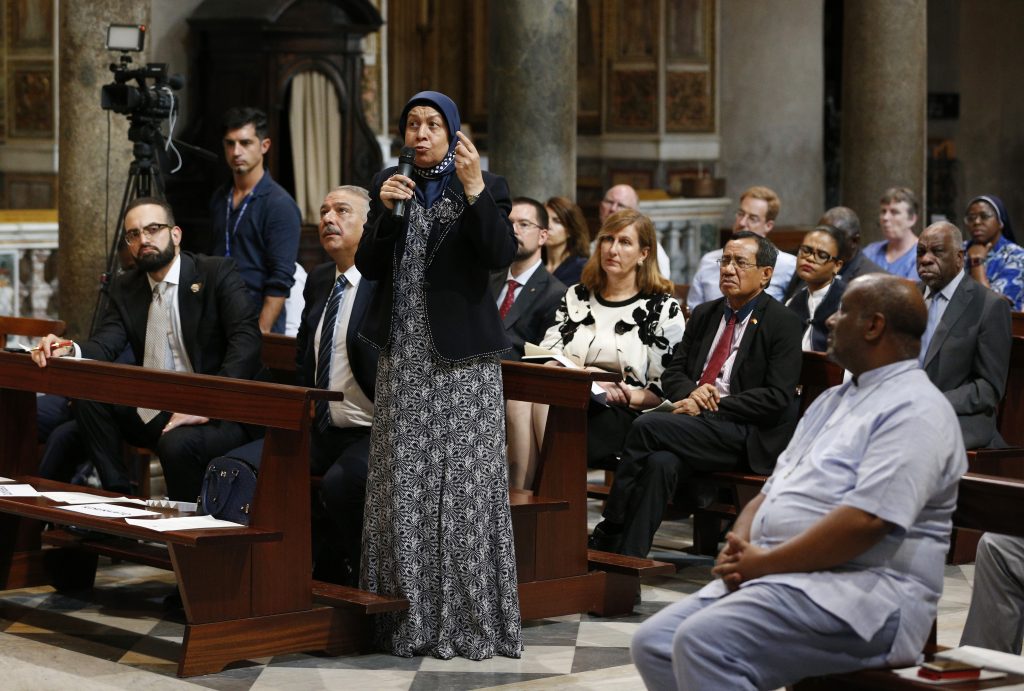 Amal Mussa Hussain Al-Rubaye, Iraqi ambassador to the Holy See, speaks during the presentation of the UK Independent Review on Persecution of Christians, in Rome July 15, 2019. (CNS photo/Paul Haring)