NEW YORK (CNS) — Utilizing personal stories from his interactions with the New York Police Department, Cardinal Timothy M. Dolan said in a newspaper column that the city’s police officers deserve better treatment and broad support on the job. Writing July 1 in the New York Post, Cardinal Dolan said police officers deserve to be recognized for the heroic work they carry out daily to protect the city. “Our valiant police officers have one of the most perilous, stressful duties around, and from what I have seen in my nearly dozen years here, they do it with care, compassion and competence,” the cardinal wrote. He said “one of the tumors on our beloved nation, past and present” is how often African Americans are targeted, profiled, caricatured, blamed and suspected “as the cause of all evil and woe in society.” And he urged people now not make police officers the object of similar broadsides. “That is raw injustice,” Cardinal Dolan wrote of this treatment of African Americans. “But for God’s sake, let’s not now, in a similar way, stereotype the NYPD.”

DAVENPORT, Iowa (CNS) — A Johnson County district court judge has temporarily blocked the enforcement of the state’s new law requiring women to wait 24 hours before having an abortion, the Iowa Catholic Conference reported July 1. Gov. Kim Reynolds signed the bill into law June 29. The injunction will continue while the suit against the law brought by Planned Parenthood and the American Civil Liberties Union takes its course. Iowa Catholic leaders praised the legislation while the bill’s opponents argued the new law is unconstitutional because it violates due process and equal protection rights of pregnant women. Opponents also said the manner in which the bill passed at the end of the session did not allow for public debate, apnews.com reported June 30. The judge’s decision prevented the law from taking effect July 1. Introduced late in this year’s pandemic-shortened session, the measure states that a physician performing an abortion shall obtain written certification from the pregnant woman at least 24 hours prior to doing the abortion. Existing law requires a pregnant woman to undergo an ultrasound test so that she has an opportunity to see an image of her unborn child before making a decision about that child’s life. In Iowa, abortion is not allowed after 20 weeks of pregnancy.

WASHINGTON (CNS) — John Feister, assistant editor of Glenmary Challenge, is the recipient of the 2020 St. Francis de Sales Award from the Catholic Press Association of the United States and Canada. The award — named for the patron saint of writers and journalists — recognizes “outstanding contributions to Catholic journalism” and is the highest honor given by the CPA. The announcement was made July 2, via a pre-recorded video released as a premiere on social media during the 2020 Catholic Media Conference, which was held virtually using digital technology due to the coronavirus pandemic. “It’s an honor to receive this prestigious award,” Feister said in his video acceptance message. He spent much of the message thanking family, friends and colleagues who had supported him over the decades in his craft in print, broadcast and digital media. “In a media environment where ongoing change becomes our new normal, there is someone who has for more than a quarter century led the charge to make the media organizations he has worked with better and has collaborated with and shown his colleagues in the Catholic press ways forward,” said Mark Lombard, the 2019 winner of the St. Francis de Sales Award, in his nomination of Feister.

WASHINGTON (CNS) — The bishop of the Diocese of Lafayette, Indiana, has suspended a priest from public ministry after the pastor referred to Black Lives Matters protesters as “maggots and parasites” in a Sunday bulletin. In a July 1 statement issued by the diocese, Bishop Timothy L. Doherty said that “Father Theodore Rothrock is suspended from public ministry,” citing the priest’s June 28 bulletin article. Though the article the bishop refers to was on the website for St. Elizabeth Seton Catholic Church in Carmel, Indiana, it has since been removed and replaced with a “response and clarification” from the priest saying it was not his intention “to offend anyone, and I am sorry that my words have caused any hurt to anyone. However, we must also be fully aware that there are those who would distort the Gospel for their own misguided purposes. People are afraid, as I pointed out, rather poorly I would admit, that there are those who feed on that fear to promote more fear and division,” Father Rothrock wrote. The diocese’s statement said the bishop “expresses pastoral concern for the affected communities” and said that the suspension offers an opportunity for pastoral discernment “for the good of the diocese and for the good of Father Rothrock.” A local group had called for Father Rothrock’s removal and had planned to protest outside the church.

PROVIDENCE, R.I. (CNS) — Two days after a vandal defaced some of the gravestones and a central cross with swastikas at the Dominican Cemetery at Providence College, Bishop Thomas J. Tobin of Providence reconsecrated and rededicated the sacred grounds where Dominican friars have been buried since the college’s founding in 1917. About 75 friars and members of the Providence College community gathered for the solemn ceremony June 24 when the bishop blessed the grounds with holy water and incense while offering prayers of consecration. “Today we come to pray that God will cleanse us. That God will cleanse our world, our nation, our community, our church and this place of vandalism from all sense of anger and division, violence and vandalism, leaving a kind of peace that only the presence of God in the end can give us,” Bishop Tobin said in the tree-shaded cemetery grounds between the college’s Center for Arts, Culture and Social Justice and its athletic fields. Dominican Father Brian Shanley, who stepped down as president June 30 after 15 years in the post, greeted Bishop Tobin at the cemetery entrance, and remarked that the moment was one of healing. “We as a community all felt violated by what happened the other night and this is a chance for us to heal ourselves as a community and this holy ground,” Father Shanley said, adding they also should pray for the man now charged with doing the damage. “I think his motivation was more mental health issues, than I hope malice, and he deserves our prayers and forgiveness.”

VATICAN CITY (CNS) — Documents uncovered from the recently opened archives of the pontificate of Pope Pius XII revealed allegations of sexual abuse and abuse of power against the founder of the Schonstatt movement, Father Joseph Kentenich. Reports of the apostolic visitation made in the early 1950s written by Dutch Jesuit Father Sebastiaan Tromp were made known by German scholar Alexandra von Teuffenbach July 2 after she wrote a letter regarding her discovery to German newspaper Die Tagespost and Italian journalist Sandro Magister. Von Teuffenbach, a former professor of church history at Rome’s Pontifical Regina Apostolorum University, said the testimonies, letters and conversations Father Tromp had with members of the Schonstatt Sisters of Mary, as well as Father Kentenich, revealed “a situation of complete subjugation of the nuns, concealed in a certain way by a sort of family structure applied to the work. Kentenich was the ‘father,’ the founder with absolute power, often equated with God,” von Teuffenbach wrote to Magister. “So much so that in many expressions and prayers it is not clear whether these are addressed to God the Father or to the founder himself.” The behavior of the founder of Schonstatt, she added, is “a striking example of what Pope Francis probably means when he speaks of clericalism, with the father and founder of the work who sets himself up as the proprietor of the nuns, in soul and body.”

VATICAN CITY (CNS) — Pope Francis has sent retired Pope Benedict XVI his prayers and condolences for the death of his brother, Msgr. Georg Ratzinger. The monsignor, a musician and the retired pope’s elder brother, died in Regensburg, Germany, July 1 at the age of 96. In a letter dated July 2, Pope Francis told his predecessor he was praying for his brother, hoping he would be rewarded in heaven for being among the “faithful servants of the Gospel. And I am also praying for you, Your Holiness,” asking that God and the Blessed Virgin sustain him with “Christian hope and tender divine consolation.” Pope Francis said he was touched by the retired pope’s kindness in “communicating to me first the news of the death of your beloved brother.” He reiterated his deepest condolences and “spiritual closeness in this time of sorrow.”

BURLINGTON, Vt. (CNS) — This year’s chrism Mass in the Diocese of Burlington didn’t take place during Holy Week as usual and instead was celebrated June 30. The special Mass at St. Joseph Cathedral in Burlington was rescheduled as churches were closed to the public celebration of the Mass before Holy Week because of the COVID-19 pandemic, a restriction that continued until recently when Vermont and the rest of the nation began to reopen. “This annual Mass traditionally is celebrated late in Lent or during Holy Week as part of the preparations for the Easter Season. This year, because of the COVID-19 pandemic, the Vatican gave the bishops worldwide permission to reschedule the Chrism Mass for another time of the year when it could be celebrated more fully,” explained Josh Perry, diocesan director of worship. Diocesan priests joined Burlington Bishop Christopher J. Coyne for the Mass where they renewed their priestly promises. He blessed them and blessed the holy oils that will be used in the sacramental life of the Catholic Church of Vermont and symbolize the link of the parishes with the bishop in sacramental ministry. The oil of the sick is blessed for the healing of body, mind and spirit. The oil of catechumens is blessed for the anointing of those preparing for baptism. The chrism oil was consecrated to anoint infants after baptism, those who are to be confirmed, and bishops and priests at their ordination. It also is used to anoint altars and churches at the time of their dedication. 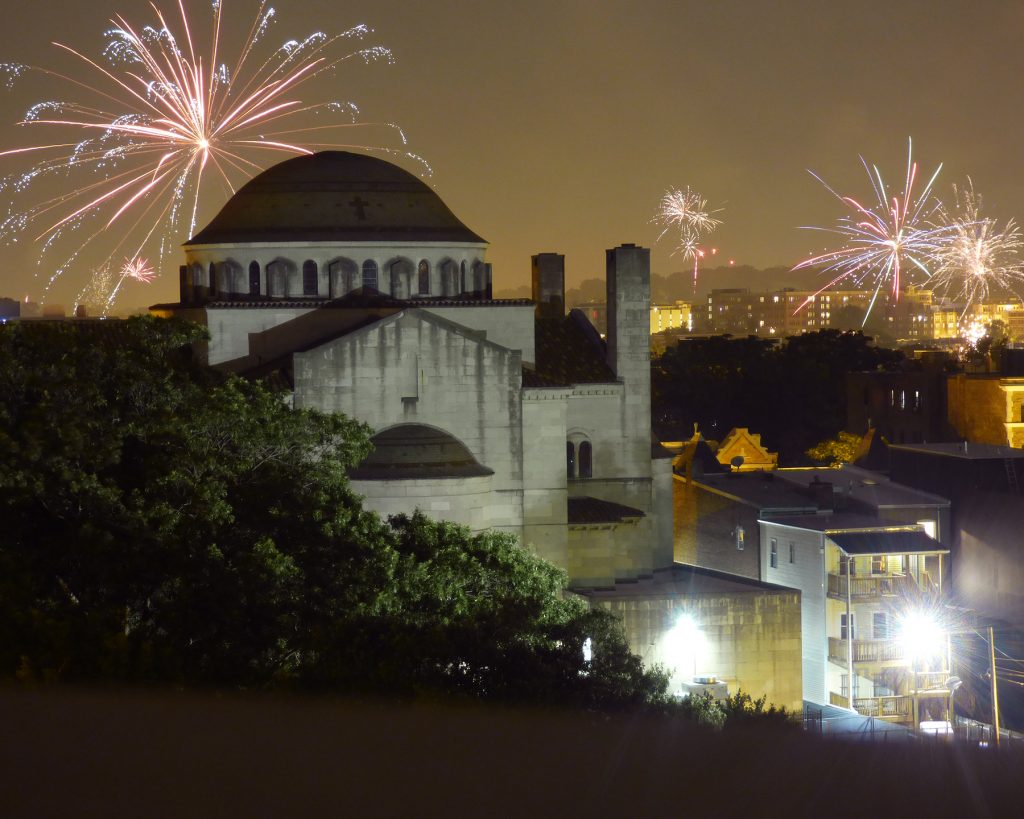 Fireworks light up the sky around the Shrine of the Sacred Heart in Washington July 4, 2020. Officials in the nation’s capital encouraged residents to watch Fourth of July fireworks at home as way to prevent spread of the coronavirus. (CNS photo/Rhina Guidos)