MOSUL, Iraq (CNS) — Cries of joy and seasonal hymns once again filled St. Paul Cathedral in Mosul as Christmas Mass was celebrated there for the first time in 3-1/2 years, following the northern Iraqi city’s liberation from Islamic State militants. The Iraqi national anthem opened the Mass as women wailed with emotion. Armored police outside protected the worshippers. Led by Chaldean Patriarch Louis Sako of Baghdad, Christians and Muslims attended the Christmas Mass on Dec. 24 in a display of unity. “My message is to our brothers the Muslims,” said Patriarch Sako. “I ask them to change their way of thinking; you should know Christianity better. In the past, Christians were the majority in Iraq; today we are minority, but without us, Mosul will never be the same.” He urged the faithful to pray for “peace and stability to reign in Mosul, Iraq and the world.”

BEIRUT (CNS) — Catholic patriarchs of the Middle East — with hope, despite uncertainty in the region — called for peace, security, prayer and solidarity at Christmastime. From Baghdad, Chaldean Catholic Patriarch Louis Sako expressed hope for a “new phase” for his country, that the recent triumph over the Islamic State and the termination of terrorist control of Mosul and other Iraqi cities is a step toward security and stability. But the liberation of those areas, he said, requires the Iraqi government to work to facilitate “the return of Christians to their homes and properties, preserving their rights as indigenous citizens, recognizing their culture, civilization and heritage as an essential part of Iraq’s history and preventing demographic changes in their historical geographic areas.” Patriarch Sako reiterated that before the American-led invasion of 2003, there were more than 1.5 million Christians in Iraq. More than half of that Christian population has migrated due to discrimination, threats, abductions and the expulsion from their homes in Ninevah Plain by the Islamic State in 2014, he said. “This is our homeland and we insist (we) remain here,” he said.

Zambian street children inspire Minnesota woman
to be their mother

MAPLE LAKE, Minn. (CNS) — Carol McBrady has no biological children. Yet on the streets of Lusaka, the capital of Zambia, she is known as Mama Carol. It started 16 years ago when she was invited to visit Africa to help care for children with AIDS. She was supposed to go to Zimbabwe, but violence rocking the country diverted the trip to Zambia. Ultimately, the journey changed the course of her life. After two trips to Zambia, she sold her home in Crystal, Minnesota, and moved to Lusaka in 2004. She later started Action for Children — Zambia, a nonprofit that helps street children by providing crisis intervention, housing — and most importantly — a sense of family. She also teaches the children how to play blackjack. It sounds simple, but to the kids, who have suffered incredible hardships such as abandonment by their parents, playing the game gives them, in many cases, their first meaningful contact with an adult. “I think the first day or the second day, they took me to the streets, and I worked with the street children and fell in love,” said McBrady, 58, who maintains ties with her parish, St. Timothy Church in Maple Lake.

VATICAN CITY (CNS) — The majority of Catholic Church workers violently killed in 2017 were victims of attempted robberies, the Vatican’s Fides agency said, with Nigeria and Mexico topping the list of countries where the most brutal murders were carried out. The agency said 23 people working for the church worldwide — 13 priests, one religious brother, one religious sister and eight lay persons — died violent deaths in 2017; that number was down from 28 people killed in 2016. Each year, Fides, the news agency of the Congregation for the Evangelization of Peoples, publishes a list of pastoral workers who died violently. The 2017 list was released Dec. 28. For the ninth year in a row, the Americas continued to be the continent most affected by violence against Catholic Church workers with 11 people killed there in 2017; with four of those deaths in Mexico, that nation continues to be where the greatest number of priests in Latin America are killed, it said.

Pope: Festivities become a facade when Christ is left out of Christmas

VATICAN CITY (CNS) — Only when Christ is the focus of the Christmas season do all the colorful lights, carols, special meals and traditions help create a festive and joyous atmosphere, Pope Francis said. “If we take Him away, the lights go out and everything become fake, illusory,” he said at his weekly general audience Dec. 27. “Without Jesus, there is no Christmas. It’s some other celebration, but it isn’t Christmas,” he said to applause. Dedicating his audience talk to the true meaning of Christmas as a celebration of Christ’s birth, the pope greeted pilgrims gathered in the Vatican’s Paul VI audience hall, which was decorated with a Christmas tree and a life-size Nativity scene. The crèche, the liturgies and the seasonal songs all help the faithful relive today the birth of Christ the Savior, he said. However, especially in Europe, he said, Christmas is being stripped of its true nature “in the name of a false respect for those who are not Christian.” But, often the true motive behind eliminating any reference to the birth of Christ is a desire to “marginalize faith.”

VATICAN CITY (CNS) — In an increasingly complex world of unprecedented scientific and technological challenges, theologians must communicate what is essential about life and help Christians proclaim God’s merciful, saving grace, Pope Francis told a group of Italian theologians. The theologians’ task requires being “faithful and anchored” to the teachings of the Second Vatican Council and continuing the council’s focus on the Church “letting itself be enriched by the perennial newness of Christ’s Gospel,” he said. Speaking Dec. 29 at the Vatican to members of the Italian Theological Association, which was celebrating its 50th anniversary, the pope said theologians and other Church workers must always refer back to Vatican II where the Church recognized its responsibility to “proclaim the Gospel in a new way.” Such a task is done not by changing the message, but by communicating the perennial message with “faithful creativity” to a world experiencing rapid transformations, he said.

VATICAN CITY (CNS) — Pope Francis and Turkish President Recep Tayyip Erdogan spoke by telephone Dec. 29 about the status of Jerusalem. Paloma Garcia Ovejero, vice director of the Vatican press office, confirmed the telephone conversation took place and said the call was Erdogan’s initiative. The Turkish newspaper Hurriyet reported that Erdogan and Pope Francis both expressed satisfaction with the U.N. resolution Dec. 21 calling on the United States to rescind its recognition of Jerusalem as the capital of Israel. The resolution passed 128 to 9, with 35 abstentions. U.S. President Donald Trump announced Dec. 6 that he was formally recognizing Jerusalem as Israel’s capital and ordering the State Department to begin preparations for moving the U.S. embassy from Tel Aviv to Jerusalem. 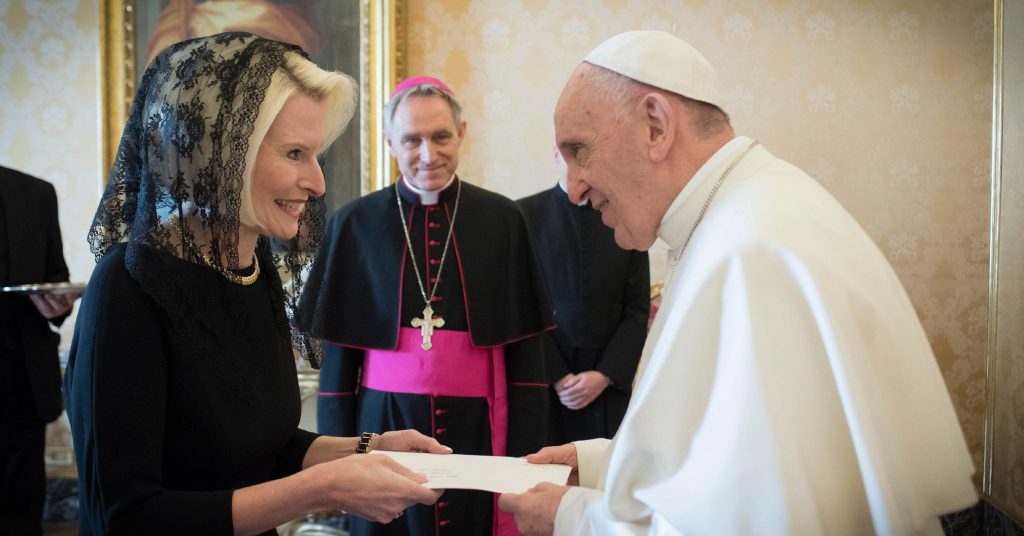 Callista Gingrich presents her letters of credential to Pope Francis Dec. 22 at the Vatican, formally assuming her duties as U.S. ambassador to the Holy See. (CNS photo/L’Osservatore Romano)