Pope declares St. Irenaeus a doctor of the church

VATICAN CITY (CNS) – Pope Francis officially has declared St. Irenaeus of Lyon a doctor of the church. In a decree released by the Vatican Jan. 21, the pope ordered that the second-century theologian be given the title of “doctor of unity” and said St. Irenaeus’ life and teachings served as “a spiritual and theological bridge between Eastern and Western Christians. May the doctrine of such a great teacher increasingly encourage the journey of all the Lord’s disciples toward full communion,” the pope said. During a meeting with Pope Francis Jan. 20, Cardinal Marcello Semeraro, prefect of the Congregation for Saints’ Causes, asked the pope to “accept the affirmative opinion” of the cardinals and bishops who are congregation members to confer the title on St. Irenaeus, who was known for his defense of orthodoxy amid the rise of gnostic sects. St. Irenaeus is the second doctor of the church named by Pope Francis after St. Gregory of Narek, who was given the designation in 2015. He brings the total number of doctors of the church to 37. Born in Smyrna, Asia Minor – now modern-day Turkey – St. Irenaeus was known as a staunch defender of the faith.

WASHINGTON (CNS) – The Catholic Church and its people stand ready not only to help expectant mothers bring their pregnancies to term but to assist women who have had abortions, said Archbishop William E. Lori of Baltimore, chairman of the U.S. bishops’ Committee on Pro-Life Activities. The ministries are many, he said in his homily at the Jan. 20 Mass that began the annual National Prayer Vigil for Life at the Basilica of the National Shrine of the Immaculate Conception. The vigil is held prior to the Jan. 21 March for Life in Washington. “I salute Project Rachel and other pioneering ministries that provide healing and spiritual renewal to women and couples after an abortion,” Archbishop Lori said in his homily. He also praised the Sisters of Life, which he called “a growing religious community of women who, by their way of life, bear witness to the beauty and dignity of every human life. This they do as they welcome pregnant women into their homes and provide life-changing spiritual resources to women in crisis,” he said. Archbishop Lori diverted from his homily to seek – and receive – a round of applause for them and all sisters at the Mass.

WASHINGTON (CNS) – President Joe Biden will nominate Catholic lawyer Joseph Donnelly of Indiana, a former member of the U.S. House and Senate, to be the next U.S. ambassador to the Vatican. The White House announced Biden’s pick for the ambassador post Oct. 8. The nomination must be confirmed by the Senate. Donnelly, 66, served in the U.S. House of Representatives from 2007 to 2013, representing Indiana’s 2nd Congressional District, and was a U.S. senator from 2013 to 2019. He is currently a partner at Akin Gump, a Washington firm specializing in public law and policy law. He was a member of the Afghanistan Study Group and has been a professor at his alma mater, the University of Notre Dame in South Bend, Indiana, where he earned a bachelor’s degree in political science in 1977 and a law degree in 1981. “Joe has been an exemplary public servant in Congress, an invaluable friend of Notre Dame and of me personally, and he is an ideal choice to represent the United States at the Vatican,” said Holy Cross Father John I. Jenkins. When Donnelly was running for reelection to the Senate in 2018, Democrats for Life of America said: “Donnelly has been a consistent pro-life voice as well as advocate for women and families, co-sponsoring many important pieces of legislation.”

SAN SALVADOR, El Salvador (CNS) – Unlike the spotless image of many holy men and women, a depiction of one of the new martyrs of the Catholic Church looks anything but polished. The boy is hunched a little. His cuffed pants are slightly too big for his small body. His shirt, improperly unbuttoned, hangs just a bit longer on one side than the other. Bullet casings are at the bare feet of the unpolished martyr. That’s the image his parish in El Paisnal, El Salvador, presented to the world, with the message that the most simple and poor, like Nelson Rutilio Lemus, a teenage boy, are worthy of the grace of martyrdom. Lemus was assassinated in his rural hometown next to his pastor, Jesuit Father Rutilio Grande, and sacristan Manuel Solórzano, March 12, 1977. The three, along with Franciscan Father Cosme Spessotto, were beatified Jan. 22 in an outdoor evening ceremony at Salvador del Mundo Plaza in San Salvador. Beatification is one of the final steps toward sainthood. Salvadoran Cardinal Gregorio Rosa Chavez, who presided at the ceremony, placed the martyrs’ and the Catholic Church’s role into the context of the country’s civil conflict in the 1970s and 1980s, which ended with peace accords in 1992. The martyrs beatified were part of more than 75,000 civilians killed. “Of the four martyrs of El Salvador who have just been beatified, we can say what John (in the Gospel) affirms … that ‘they come from the great tribulation’ and ‘that they have washed their clothes and made them white with the blood of the Lamb,’” the cardinal said.

VATICAN CITY (CNS) – Highlighting the importance of the Bible in the life of faith and the role of lay women and men in sharing the Gospel, Pope Francis formally installed eight men and women in the ministry of lector and eight others in the ministry of catechist. During Mass on Jan. 23, the church’s celebration of Sunday of the Word of God, the pope used a revised rite for formally installing lectors, a ministry he opened to women a year earlier, and the new rite for the ministry of catechist, which he established in May. Pope Francis installed six women – from South Korea, Pakistan, Ghana and Italy – and two Italian men in the ministry of lector, telling them they were placing themselves “in the service of the faith, which is rooted in the word of God.” Three women from Spain, Brazil and Ghana and five men from Italy, Peru, Brazil and Poland were installed as catechists, and Pope Francis told them they were called “to live more intensely the apostolic spirit, following the example of those men and women who helped Paul and the other apostles to spread the Gospel.”

WASHINGTON, D.C. (CNS) – Though not every participant at the annual March for Life in Washington, D.C. is Catholic, the faithful presence of those who are is made abundantly apparent every year. Among the annual marchers are Franciscan Friars of the Renewal, and this year was no exception. They were among the thousands of people from all walks of life who came together in unity to show their support for the lives of unborn children Jan. 21 for the 49th annual march and rally marking the anniversary of Roe v. Wade. The Franciscan friars traveled to Washington, D.C. from multiple locations in New York and New Jersey, bringing with them lay associates and young people to gather on the National Mall to listen to rally speakers and then march as a group up Constitution Avenue. “To be here and gather together with young people and old people, and to be encouraged by the witness. … We are here to promote the dignity of life. I want to be a part of that movement,” said Brother Thomas McGrinder, a Franciscan Friar of the Renewal for the past 25 years. “I am encouraged by what I see with all of the young people, it is always a great grace to be here with them and support their witness as well,” he said. 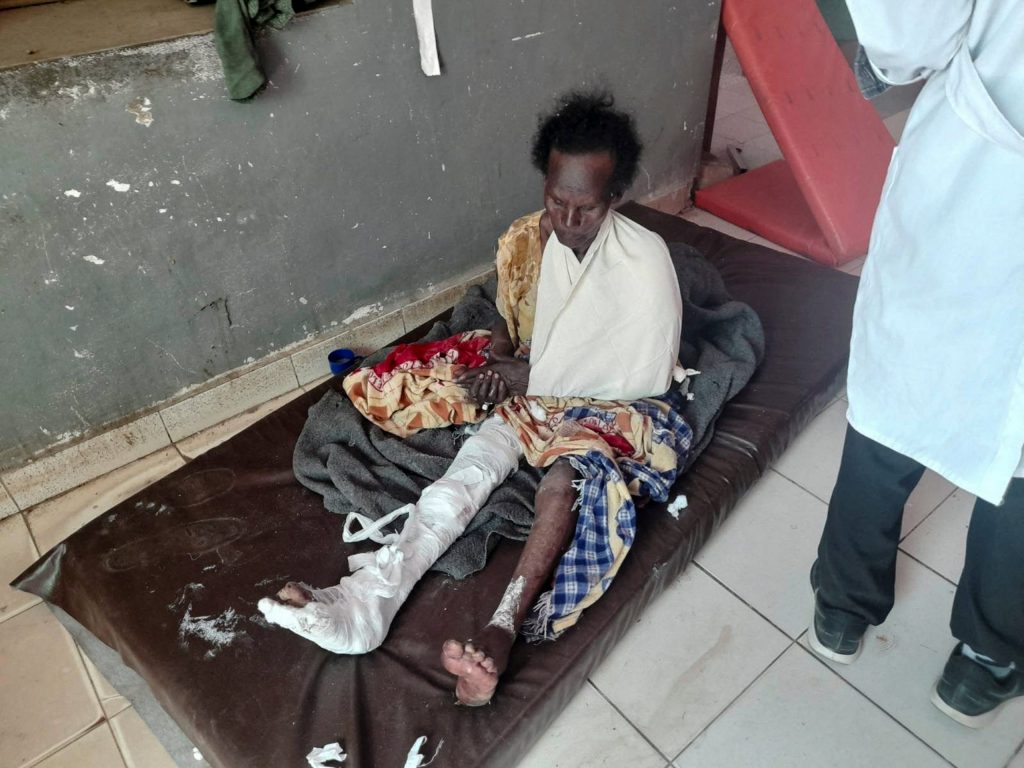 A survivor of an airstrike by Ethiopian government forces receives treatment at the Shire Shul General Hospital in the northern region of Tigray, Ethiopia, Jan. 8, 2022. The Adigrat Catholic Eparchy has asked for an international push for dialogue and aid. (CNS photo/Reuters)