Week of prayer focuses on reconciliation among Christians

VATICAN CITY (CNS) — The 2021 Week of Prayer for Christian Unity should help Christians see that the closer they draw to Christ, the closer they will be to one another, said materials for the week published by the Vatican. “Divisions among Christians — moving away from one another — are a scandal because it is also moving further away from God,” the material said. “Christ’s prayer for unity is an invitation to turn back to him and so come closer to one another, rejoicing in the richness of our diversity.” The resource material for the Jan. 18-25 octave of prayer, published on the website of the Pontifical Council for Promoting Christian Unity, was prepared by the Monastic Community of Grandchamp, an ecumenical religious community of women based in Switzerland. “The theme that was chosen, ‘Abide in my love and you shall bear much fruit,’ is based on John 15:1-17 and expresses the Grandchamp Community’s vocation to prayer, reconciliation and unity in the church and the human family,” the pontifical council said.

WASHINGTON (CNS) — Eight Catholic bishops serving Maryland dioceses urged President Donald Trump Dec. 22 to stop the planned federal execution of Dustin Higgs, a Maryland man on death row in Indiana. The bishops, including Cardinal Wilton D. Gregory of Washington, Baltimore Archbishop William E. Lori and Bishop W. Francis Malooly of Wilmington, Delaware, also wrote to Maryland Gov. Larry Hogan seeking his support in fighting this execution, which is scheduled to take place Jan. 15. In their letter to Trump, the bishops wrote: “Alternative sentences, such as life without parole, are punishments through which society can be kept safe. The death penalty does not create a path to justice. Rather, it contributes to the growing disrespect for human life and perpetuates a cycle of violence in our society.” They also quoted Pope Francis, who said: “Human justice is imperfect, and the failure to recognize its fallibility can transform it into a source of injustice.” In a letter to Hogan, a Republican, the bishops said they were proud of the state’s leadership in ending the death penalty and urged him to “intervene with the Trump administration to ask that this execution be stopped.”

WASHINGTON (CNS) — Christmas messages shared by U.S. Catholic leaders stressed the need to keep hope and faith alive this season particularly in the midst of the challenging pandemic year. “As 2020 comes to an end, we know that sadly the trials and challenges caused by the coronavirus pandemic will not,” said Los Angeles Archbishop José H. Gomez, president of the U.S. Conference of Catholic Bishops. “For me, and I know for many of you, this long year has brought us face-to-face with basic facts: that life is fragile and uncertain, that powers beyond our control can suddenly disrupt our plans and hopes, that sickness and death can come into our lives at any time,” he wrote in a Dec. 22 column for Angelus, the online news outlet of the Los Angeles archdiocese. He said the experience of the past year is a chance to “deepen our awareness of our dependence on God” and calls people back “to the truth that what matters is seeking God’s will for our lives, following his commands, fixing our hearts on heaven.” And that is why believers “approach Christmas this year with renewed hope,” he added. He also reminded Catholics that Pope Francis has announced a “Year of St. Joseph, from Dec. 8 of this year to Dec. 8, 2021.

HO CHI MINH CITY, Vietnam (CNS) — High-ranking Vietnamese government officials have praised the country’s Catholics for their contributions in addressing the coronavirus pandemic and returned confiscated Church buildings as Christmas gifts during visits with Church leaders. Nguyen Thi Kim Ngan, National Assembly chairwoman, and other national and local officials offered Christmas and New Year flowers and greetings to Archbishop Joseph Nguyen Chi Linh of Hue at his residence Dec. 22, ucanews.com reported. State-run media said Ngan applauded local Catholics’ efforts to control the deadly coronavirus pandemic and respond to recent natural disasters. Vietnam, which is among only a few countries that can call 2020 a success in response to the pandemic, has gained achievements in socioeconomic development during the year despite great difficulties posed by COVID-19, the illness caused by the coronavirus. The Southeast Asia country of 97 million has recorded 1,420 coronavirus infections and 35 deaths through Dec. 23, according to the Johns Hopkins Coronavirus Resource Center.

OTTAWA, Ontario (CNS) — Canada’s Catholic bishops said it is “not too late to reconsider” and stop the expansion of legally assisted suicide in Canada. They called on all Catholics and Canadians opposed to expanding the country’s medical assistance in dying system to speak out against the proposed legislation after the federal government was given until Feb. 26 to bring federal law in line with a 2019 Quebec court decision. A Quebec court Dec. 17 granted additional time for the government to consider proposed changes to the legislation, known as Bill C-7. The bishops are hoping the extended deadline will provide greater opportunity to persuade elected officials to pull back from making it easier for Canadians to participate in physician-assisted suicide. In a strongly worded statement released Dec. 18, the executive committee of the Canadian Conference of Catholic Bishops called on Canadian politicians to reconsider changes to the medical assistance in dying system that Church officials and others have argued are being rushed. 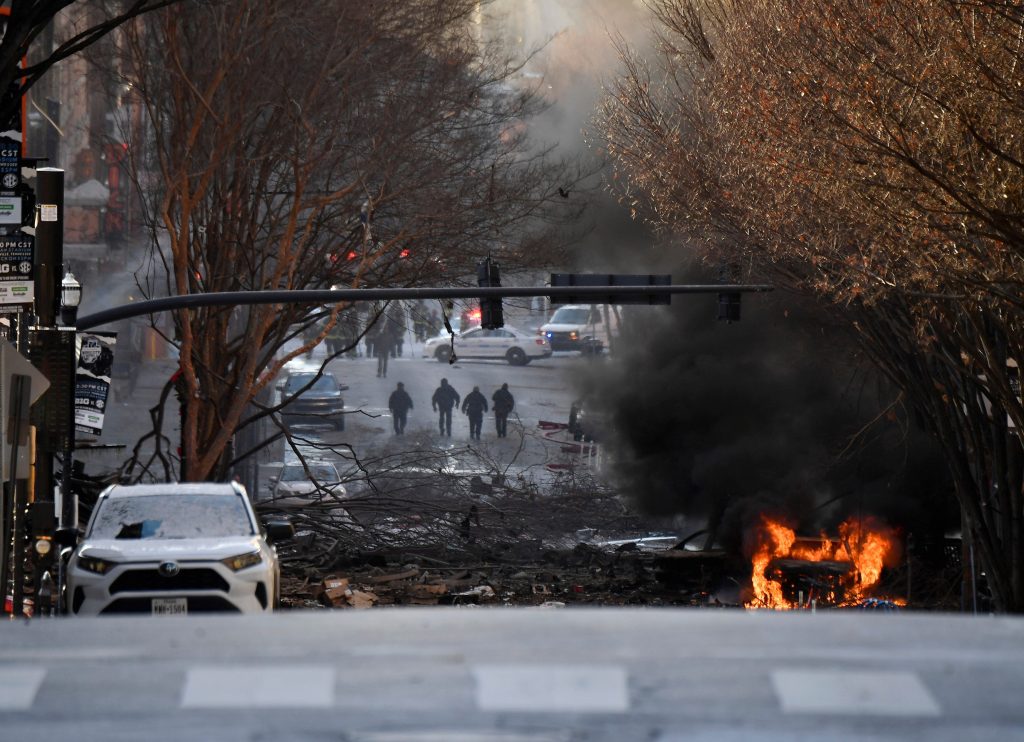 A vehicle in Nashville, Tenn., burns near the site of an explosion Dec. 25, 2020. (CNS photo/Andrew Nelles, Tennessean.com, USA TODAY NETWORK via Reuters) Editor’s note: No resales. No archives.