APPLE VALLEY, Minn. (CNS) — When Allen Diaz’s girlfriend — who is pregnant — visited Pregnancy Choices pregnancy help center in Apple Valley last year, it led to more help for Diaz as an expectant father than he could have imagined. “It helps a lot when you’re a new father, and on top of that, they give you a lot of very good tips,” said Diaz, 29, who participated in Pregnancy Choice’s life coaching program for expectant fathers. Pregnancy Choices, part of the Elevate Life network of centers serving clients with unexpected pregnancies, is the only pregnancy resource center in Minnesota with a paid certified life coach for fathers, according to Vaunae Hansel, who is president of Elevate Life. The program helps fathers prepare for their new responsibility and support the mother. Luke Spehar, the center’s certified life coach, has been working with fathers for the past two years. “I think the biggest thing we offer men here is a listening ear,” Spehar told The Catholic Spirit, the newspaper of the Archdiocese of St. Paul and Minneapolis said. “We really just listen and give them a voice to share what’s going through their heart and mind as they’re trying to navigate an unexpected pregnancy.” When Spehar began working with Pregnancy Choices, he said he couldn’t find any men’s ministries at other pregnancy help centers to learn from. Also a professional Catholic musician, Spehar came to Pregnancy Choices looking to volunteer, but he was asked to become a life coach because of the growing presence of male clients coming with their partners. “We kind of have had to blaze a trail with it so far,” Spehar said.

WASHINGTON (CNS) — Just in time for the annual March for Life, an annual poll of Americans’ views on abortion shows that 75 percent want “substantial” restrictions on abortion access even as more than half of respondents describe themselves as “pro-choice.” Conducted by the Marist Poll at Marist College, the survey of 1,066 adults Jan. 8-10 revealed that respondents would welcome limits on abortion so that it can be performed only during the first three months of pregnancy. Even 61 percent of “pro-choice” respondents favored such a restriction. Unsurprisingly, 96 percent of respondents who identified as pro-life supported such a restriction. Among Republicans, 92 percent support abortion limits, while 60 percent  of Democrats and 78 percent of independents shared the same view. “What you’re getting here is the sense that the debate over abortion when you look at what people want in terms of restrictions … is in favor of substantial restriction on abortion,” said Andrew Walter, vice president for communications and strategic planning for the Knights of Columbus, during a Jan. 15 teleconference with reporters. The Knights have sponsored the poll since 2008.

WASHINGTON (CNS) — Two federal judges temporarily blocked the government from putting into effect new rules that would expand the exemption to the federal contraceptive mandate to the Little Sisters of the Poor and other religious employers. The decisions came in cases filed in federal courts in Pennsylvania and California that challenged the expansion, arguing that allowing some employers to not offer contraceptive coverage in health insurance plans violated provisions of the Affordable Care Act. Judge Wendy Beetlestone of the U.S. District Court for the Eastern District of Pennsylvania based in Philadelphia issued a nationwide preliminary injunction the afternoon of Jan. 14, the day the policy was to take effect. Beetlestone’s 65-page ruling came less than 24 hours after Judge Haywood S. Gilliam Jr. of the U.S. District Court for the Northern District of California granted a preliminary injunction sought by 13 states and the District of Columbia to stop the rules from taking effect. The decisions do not permanently block the new policy, but prevent the rules from taking effect while the legal challenges are debated in the courts. Lawyers for the Little Sisters of the Poor said the religious order would continue to defend its religious rights. U.S. Catholic bishops said Jan. 15 that “freezing these common-sense regulations leaves those with conscientious or religious objections” to the contraceptive mandate “out in the cold.”

VATICAN CITY (CNS) — Pope Francis advanced the sainthood causes of three women and recognized the martyrdom of 14 religious sisters who were killed during the Spanish Civil War. The pope formally recognized a miracle needed for the canonization of Blessed Marguerite Bays, a laywoman from Switzerland known for her spirituality in the face of great physical suffering and for bearing the stigmata of Christ. Born in 1815, she grew up helping the peasant farmers in her small village and became a professed member of the Secular Franciscan Order. She was particularly devoted to Our Lady and discovered she was cured of colon cancer on Dec. 8, 1854, when Pope Pius IX proclaimed the dogma of the Immaculate Conception. The same year, she started to show signs of the stigmata on her hands, feet and chest. She died in 1879 and St. John Paul II beatified her in 1995.

Collection for the Church in Latin America to be held
Jan. 26-27

The collection supports the work of the Subcommittee on the Church in Latin America by funding grants for pastoral efforts such as lay leadership training, seminarian and religious formation, prison ministry, and youth ministry, among others. In 2018, the collection awarded nearly $7.5 million in grants to support the Church in Latin America and Caribbean, including areas ravaged by recent natural disasters.

VATICAN CITY (CNS) — At the upcoming meeting on protecting minors, Pope Francis wants leaders of the world’s bishops’ conferences to clearly understand what must be done to prevent abuse, care for victims and ensure no case is whitewashed or covered up. “The pope wants it to be an assembly of pastors, not an academic conference — a meeting characterized by prayer and discernment, a catechetical and working gathering,” Alessandro Gisotti, interim director of the Vatican press office, told reporters Jan. 16. The Feb. 21-24 meeting on the protection of minors in the Church “has a concrete purpose: The goal is that all of the bishops clearly understand what they need to do to prevent and combat the worldwide problem of the sexual abuse of minors,” Gisotti said, reading from a written communique in Italian and English. “Pope Francis knows that a global problem can only be resolved with a global response,” he said. The pope announced in September that he was calling the presidents of the world’s bishops conferences, the heads of the Eastern Catholic churches and representatives of the leadership groups of men’s and women’s religious orders to the Vatican to address the crisis and focus on responsibility, accountability and transparency. 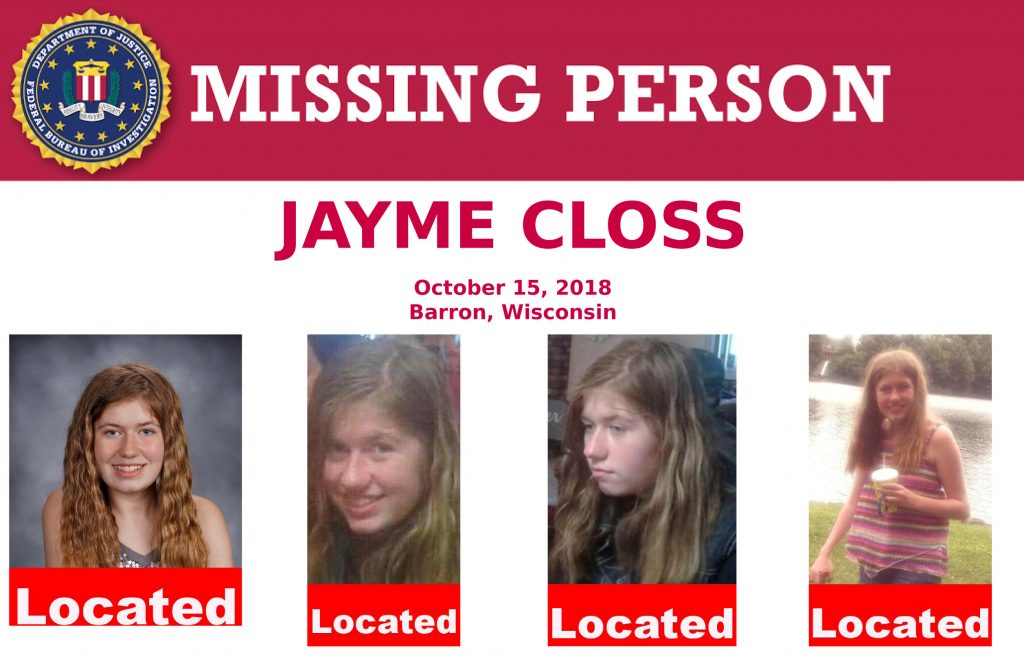 Wisconsin teen Jayme Closs is seen in this U.S. Federal Bureau of Investigation missing person poster. She had been missing for nearly three months after being kidnapped, but she escaped her abductor Jan. 10 in Gordon, Wis. (CNS photo/FBI handout via Reuters)