WASHINGTON (CNS) — A federal judge in Maryland issued a preliminary injunction Jan. 15 blocking the Trump administration from enforcing an executive order that would allow state and local government officials to reject resettling refugees in their jurisdictions. The judge ruled in favor of the plaintiffs, three faith-based resettlement agencies — HIAS, a Jewish organization; Church World Service; and Lutheran Immigration and Refugee Service — who said their work would be directly impacted and harmed by the order. In his 31-page decision, U.S. District Judge Peter Messitte said the executive order could be seen as unlawful because it grants states and localities veto power that “flies in the face of clear congressional intent.” The judge also called for refugee resettlement to “go forward as it developed for the almost 40 years” prior to President Donald Trump’s executive order, announced last September. Ashley Feasley, director of policy for Migration and Refugee Services of the U.S. Conference of Catholic Bishops, echoed this sentiment, telling Catholic News Service that “refugee resettlement will continue as it has before” based on available resources and family connections. But she also acknowledged that the refugee resettlement process has taken a hit. “Everything is in flux,” she said just after the injunction was issued, and she pointed out it would likely be appealed by the Trump administration.

VATICAN CITY (CNS) — Pope Francis named Francesca Di Giovanni, a longtime Vatican official, as an undersecretary in the Vatican’s foreign ministry office, making her the first woman to hold a managerial position at the Vatican Secretariat of State. The Vatican announced Jan. 15 that within the Vatican Secretariat of State’s Section for Relations with States, Di Giovanni will head the multilateral sector, which deals with intergovernmental organizations and multilateral treaties. With the new appointment, the Vatican foreign ministry, led by Archbishop Paul J. Gallagher, will have two undersecretaries. Di Giovanni will serve as undersecretary alongside Msgr. Miroslaw Wachowski, who will continue to work in the area of bilateral diplomacy. In an interview with Vatican News published shortly after the announcement, Di Giovanni said that there had been a need for an undersecretary for the multilateral sector, but “I sincerely never would have thought the Holy Father would have entrusted this role to me. It is a new role and I will try to do my best to live up to the Holy Father’s trust, but I hope not to do it alone,” she said. “I would like to count on the harmony that has characterized our working group so far.”

WASHINGTON (CNS) — While the United States has “come a long way” in addressing racism and injustice, much more remains to be accomplished to achieve the dream of “the beloved community” envisioned by the late Rev. Martin Luther King Jr., the president of the U.S. Conference of Catholic Bishops said. Archbishop Jose H. Gomez of Los Angeles urged the country to overcome still-entrenched racist beliefs and discriminatory practices in a statement released in Washington to mark the annual holiday honoring the civil rights leader, which this year fell on Jan. 20. “We have come a long way in our country, but we have not come nearly far enough,” Archbishop Gomez said in the statement issued Jan. 16 by the USCCB. “Too many hearts and minds are clouded by racist presumptions of privilege and too many injustices in our society are still rooted in racism and discrimination.” The archbishop lamented that “too many” young African American men are killed across the nation or are “spending their best years behind bars.”

VATICAN CITY (CNS) — Protecting human life is the “preeminent” social and political issue, Pope Francis said, and he asked the head of the U.S. bishops’ Committee for Pro-Life Activities to convey his support to the pro-life community. Archbishop Joseph F. Naumann of Kansas City, Kansas, chairman of the bishops’ committee, told Catholic News Service Jan. 16 that the pope agreed with the U.S. bishops “identifying the protection of the unborn as a preeminent priority. His response to that was, ‘Of course, it is. It’s the most fundamental right,’” Archbishop Naumann recalled the pope saying. “He said, ‘This is not first a religious issue; it’s a human rights issue,’ which is so true.” Archbishop Naumann was one of 15 bishops from Iowa, Kansas, Missouri and Nebraska making their “ad limina” visits to the Vatican in mid-January to report on the status of their dioceses. He and other bishops spoke to Catholic News Service Jan. 16 after meeting with the pope for more than two hours. Archbishop Naumann said he told the pope that since the Roe v. Wade court decision legalized abortion, an estimated 61 million abortions have taken place in the United States.

WASHINGTON (CNS) — President Donald Trump announced his administration’s new guidance on prayer in public schools during a Jan. 16 event in the Oval Office on National Religious Freedom Day. Primarily, it will require states to report cases where public school students have been denied their right to pray. Ahead of the event, material about it was provided to reporters in a background briefing the morning of Jan. 16. In a separate proposed rule, the administration aims to protect the rights of religious student groups at public universities, giving them equal treatment with secular student groups. For schools to receive federal funding, they will need to certify once a year with state education departments that they do not have policies in place that would prevent students from constitutionally protected prayer, a senior administration official said. State departments of education also would have to report to the U.S. Department of Education each year with a list of local school boards that failed to make the required certification as well as complaints made to that department about a local school board or school that has been accused of denying students or teachers their right to engage in constitutionally protected prayer. 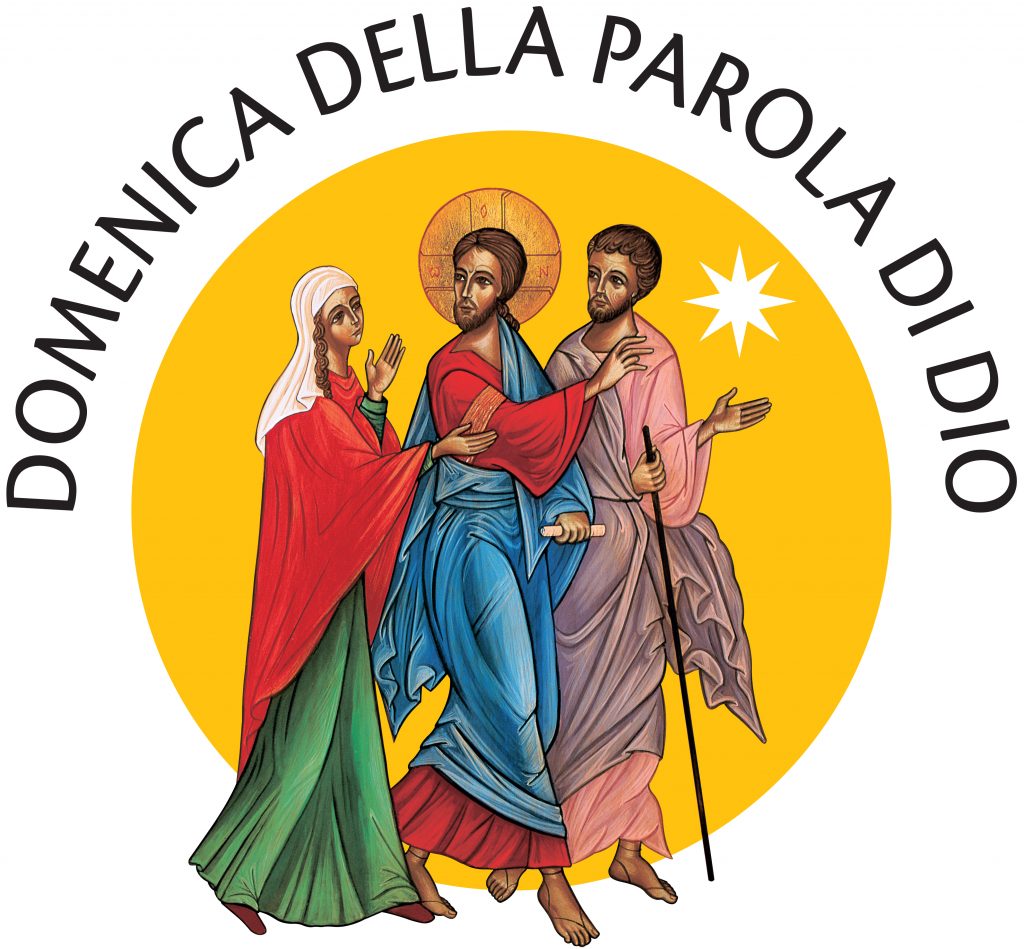 The official logo for the Sunday of the Word of God was unveiled at the Vatican Jan. 17. The colorful logo depicts “The Road to Emmaus” and is based on an icon written by the late Benedictine Sister Marie-Paul Farran. The newly established day is being celebrated Jan. 26 and is meant to be devoted to the celebration, study and dissemination of the word of God. (CNS logo/courtesy Pontifical Council for Promoting New Evangelization)