LITTLE ROCK, Ark. (CNS) — A federal appeals court reaffirmed a hold on an Arkansas law that bans abortions 18 weeks into pregnancy and another banning an abortion from being performed when a fetus is detected to have Down syndrome. The Jan. 5 ruling from a three-judge panel of the 8th U.S. Circuit Court of Appeals keeps in place a federal judge’s 2019 ruling that temporarily blocked the state from enforcing the law. The court said the Arkansas statutes are governed under established case law that restricts undue burdens on women to seek an abortion. Its decision cited outcomes of previous cases including those settled by the U.S. Supreme Court. Arkansas Attorney General Leslie Rutledge has defended the laws in court. She said she planned to seek further review of the decision. “The Supreme Court must limit and ultimately overturn Casey and I plan to do everything in my power to see that they do,” Rutledge said in a statement referring to the Planned Parenthood v. Casey decision in 1992 that prohibited regulations that created an “undue burden” on women seeking an abortion.

Daily podcast that leads listeners through Bible’s narrative is No. 1 in U.S.

ST. PAUL, Minn. (CNS) — If great minds had brainstormed how to create a podcast that would jump to No. 1 in Apple’s podcast rankings, they never would have landed on “The Bible in a Year,” joked Jeff Cavins, a Bible scholar and creator of the Great Adventure Bible Timeline. Yet, two weeks into 2021, “The Bible in a Year” with Father Mike Schmitz tops the charts — and has since 48 hours after its Jan. 1 launch. With the backing of Ascension, a multimedia Catholic publisher, Cavins and Father Schmitz, a priest of the Diocese of Duluth, Minnesota, and popular Catholic speaker and author, created “The Bible in a Year,” a daily podcast that leads listeners through the Bible’s narrative. The aim is for listeners to understand how God’s plan for mankind’s salvation undergirds biblical events and the lives of its central figures. Each episode is about 20 minutes and includes Father Schmitz reading several chapters from Scripture, often from different books, and then giving a short reflection on the readings. “The Bible in a Year” is available on Apple Podcasts, Spotify and other podcast platforms, and through Hallow, a Catholic prayer App.

Supreme Court says abortion drugs must be obtained in person, not by mail

WASHINGTON (CNS) — The Supreme Court Jan. 12 reinstated a federal requirement that women who are seeking abortion-inducing drugs must do so in person, not by mail, as a federal judge had allowed last year due to the pandemic and the high court had let stand. In its 6-3 order, the justices said women must follow previous Food and Drug Administration requirements that they had to visit a doctor’s office, hospital or clinic in person to obtain Mifeprex, the brand name for mifepristone, also called RU-486, which is used to end pregnancies during the first 10 weeks. FDA regulations initially required patients to receive the drug in person after signing a form acknowledging risks associated with it. “We welcome the Supreme Court’s reinstatement of the FDA’s ability to enforce important and long-standing health and safety requirements related to chemical abortion drugs,” said Archbishop Joseph F. Naumann of Kansas City, Kansas, chairman of the U.S. Conference of Catholic Bishops’ Committee on Pro-Life Activities. Using mifepristone received by mail order for an abortion, he said, is a “dangerous, painful and emotionally  bleak process” that results “in the death of innocent unborn lives and often has lasting negative impacts on women.”

Pope: King’s ‘vision of harmony, equality for all’ remains timely

ATLANTA (CNS) — With “social injustice, division and conflict” threatening the common good, people need to rediscover and recommit to the vision of the Rev. Martin Luther King Jr. to work nonviolently for harmony and equality for all, Pope Francis said. “Each one of us is called to be an artisan of peace by uniting and not dividing, by extinguishing hatred and not holding on to it, by opening paths of dialogue,” the pope, quoting his encyclical on global fraternity, said in his message to the Jan. 18 “Beloved Community Summit.” The summit was an online event marking the King holiday and promoting his vision of a community where differences are resolved through dialogue and where people work together to perfect equality and to end injustice. The pope’s letter was sent to the Rev. Bernice King, daughter of the slain civil rights leader and CEO of the King Center in Atlanta. “In today’s world, which increasingly faces the challenges of social injustice, division and conflict that hinder the realization of the common good, Dr. King’s vision of harmony and equality for all people, attained through nonviolent and peaceful means, remains ever timely,” the pope wrote. What is essential, he said, is to see each other as neighbors “in the truth of our share dignity as children of Almighty God.”

SOUTH BEND, Ind. (CNS) — Love is the solution to the deep divisions that trouble societies, Archbishop José H. Gomez of Los Angeles, president of the U.S. Conference of Catholic Bishops, said in his Jan. 12 keynote for a virtual conference at the University of Notre Dame. The archbishop focused on migrants and the global refugee crisis. But he also alluded to “the violence last week at our nation’s Capitol, and the deep polarization and divisions in our country.” His address came six days after the storming of the Capitol in Washington by supporters of President Donald Trump. All of these problems are more than a failure of politics or diplomacy, he said: “It’s a failure of human fraternity and solidarity. It’s a failure of love.” Archbishop Gomez’s keynote “What Do We Owe the Immigrant?” reflected the conference theme: “We Belong to Each Other,” a quotation from St. Teresa of Kolkata. He related that he has worked for over 20 years on immigration reform and advocating for migrants and refugees, and he has come to realize these issues are part of deeper questions about God and the human person, namely that God is love and has created humans in his own image “that calls us to form one human family and to live together in love as brothers and sisters.”

CLEVELAND (CNS) — President Donald Trump’s decision to ask Congress to rescind billions of dollars in foreign aid spending is “extremely ill-advised,” said a senior Catholic Relief Services official. Bill O’Keefe, the agency’s executive vice president for mission, mobilization and advocacy, said cuts the president seeks in food aid, health care and vaccinations for the coronavirus would harm children and vulnerable people around the world. “We’ve got throughout East Africa a locust infestation. Drought in some places and floods in others. Plus there’s endemic climate change-induced problems and the COVID pandemic. So this is not the time to be cutting,” O’Keefe told Catholic News Service. Trump in a Jan. 14 letter to congressional leaders explained that he is seeking to rescind $27.4 billion in spending that already had been approved for 73 programs. The action came six days before Trump was to leave office. While the president can propose the cuts, Congress has the final authority to act on the request. Congress is not scheduled to return to work until Jan. 19 and it is expected his request will be ignored. 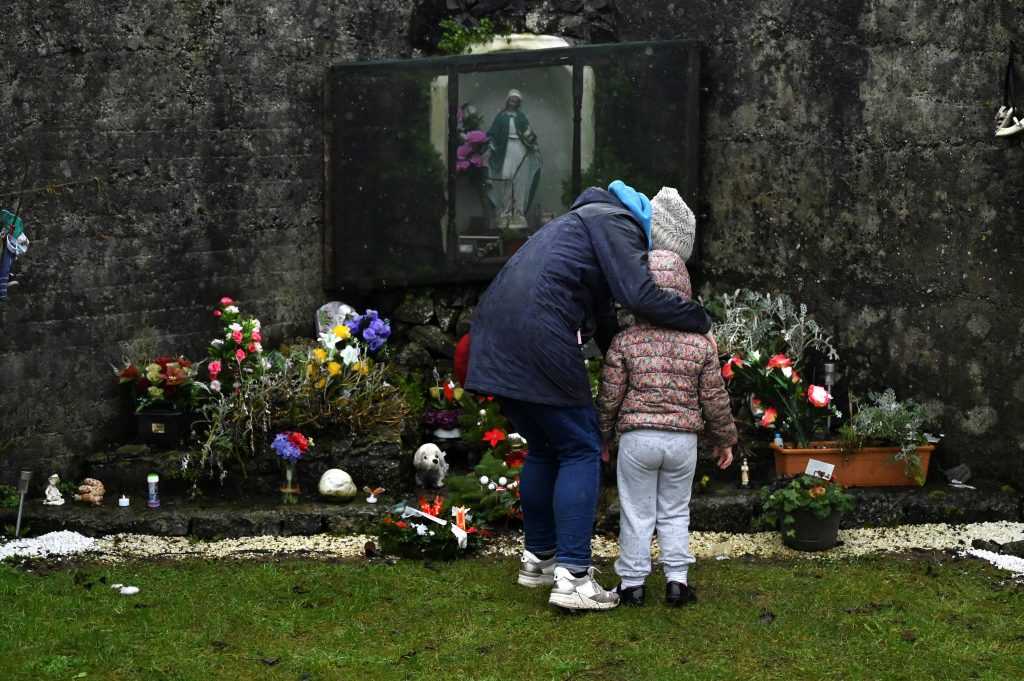 Denise Gormley and her 7-year-old daughter, Rosa, pay their respects at a cemetery in Tuam, Ireland, where the bodies of nearly 800 infants were uncovered at the site of a former Catholic home for unmarried mothers and their children. The photo was taken Jan. 12, 2021, the day a commission investigating the treatment of women in such homes released its report. (CNS photo/Clodagh Kilcoyne, Reuters)