Vatican announces ‘Pilgrims of Hope’ as motto for Holy Year 2025

VATICAN CITY (CNS) – Pope Francis approved “Pilgrims of Hope” as the motto for the Holy Year 2025. The motto aims to give a concise sense of the full meaning of the jubilee journey, Archbishop Rino Fisichella told Vatican News Jan. 13. The words “pilgrims” and “hope” also represent key themes of Pope Francis’ pontificate, said the archbishop, president of the Pontifical Council for Promoting New Evangelization, which is in charge of the Holy Year planning efforts. The archbishop said the pope approved the motto Jan. 3 and that he is awaiting further instructions from the pope. In the meantime, the council already is working with Vatican and Italian authorities on the best way to welcome a large number of visitors during the year. Traditionally for holy years, the celebrations begin with the pope opening the Holy Door of St. Peter’s Basilica on Christmas Eve and ends with the sealing of the door one year later. The holy doors of St. John Lateran, St. Paul Outside the Walls and St. Mary Major are opened for the year, too.

WASHINGTON (CNS) — The president of the U.S. Conference of Catholic Bishops urged all people of goodwill to commemorate the Rev. Martin Luther King Jr.’s life and legacy Jan. 17 by remembering “not only the justice he pursued, but how he pursued it.” The civil rights leader “was driven by the biblical vision of righteousness and truth, a vision that he understood to be reflected in our nation’s founding documents,” said Los Angeles Archbishop José H. Gomez in a Jan. 15 statement. “He believed in what he called the ‘American creed,’ the belief expressed by our founders that all men and women are created equal and endowed by God with a sacred dignity and undeniable rights to life, liberty and equality,” the prelate added. Rev. King, who was assassinated in 1968 at age 39, would have turned 93 on Jan. 15. Martin Luther King Jr. Day is observed on the third Monday of January each year. “America faces many challenges” today, Archbishop Gomez said, including “this ongoing pandemic, issues of economic inequality and racial discrimination, violence in our communities, the struggle to welcome immigrants and refugees.” The nation also has “become more polarized and our divisions angrier.” In looking to the future, he urged all to carry on his work “for equality and justice” and “imitate his example and prophetic witness.”

TRENTON, N.J. (CNS) – In a joint statement Jan. 11, New Jersey’s Catholic bishops unequivocally condemned the Freedom of Reproductive Choice Act, an expansive abortion bill they said was passed with extraordinary haste by the state Senate and General Assembly a day earlier. Democratic Gov. Phil Murphy, who is Catholic, has publicly committed to signing the bill into law. A replacement for the rejected Reproductive Freedom Act of October 2020, the new measure was passed by the Senate 23-15 and by the Assembly 46-22 with eight abstentions. Although abortion has long been legal and accessible in New Jersey, the new bill codifies it as constitutionally protected law, making any proposed law to limit or outlaw abortions null. The bill’s proponents have argued that it protects a legal right to abortion in the state if the Supreme Court were to overturn its 1973 ruling in Roe v. Wade that legalized abortion nationwide. “Any law, rule, regulation, ordinance, or order, in effect on or adopted after the effective date of this act, that is determined to have the effect of limiting the constitutional right to freedom of reproductive choice and that does not conform with the provisions and the express or implied purposes of this act, shall be deemed invalid and shall have no force or effect,” the bill states. In their letter, the bishops expressed their “profound disappointment and deep concern about the passage of (the bill), which codifies into state law an individual’s right to an abortion, including late-term abortions. This law departs from the fundamental Catholic teaching that all life is sacred from conception to natural death.

ST. MARTINVILLE, La. (CNS) – An annual 100-hour, nonstop public Bible reading takes place in St. Martinville in the Diocese of Lafayette Jan. 19-23. The holy Bible will be read publicly from cover to cover without pause in the square of the diocese’s oldest church parish, St. Martin de Tours. The parish was erected in 1765 and the present church dates to 1836. The reading will begin at 12:30 p.m. (local time) Jan. 19 and end at 4:30 p.m. Jan. 23, which is Word of God Sunday. During the four days of continuous reading, 300 lectors from the various 121 parish churches in the Diocese of Lafayette as well as faith leaders from other denominations from across the Acadiana region will be employed. In addition to English, selections of the Bible will be read in French, Italian, German, Spanish, Vietnamese, Hebrew, Latin and Greek. More than 3,000 people usually attend at various times throughout the 100 hours. The Bible Marathon will be livestreamed on the Fête-Dieu du Teche Facebook page. The special event is intended to help “prime the pump” and reignite a love for the word of God and its practice in our lives, said Father Michael Champagne, a priest of the Community of Jesus Crucified, who is the organizer of the event.

Archbishop calls for prayers for Myanmar, which faces multiple crises

MANDALAY, Myanmar (CNS) – Archbishop Marco Tin Win of Mandalay has urged Catholics in Myanmar to hold special prayers for the nation facing “the crisis of COVID-19, hunger, civil wars and torture.” Ucanews.com reported the prelate has designated every Saturday evening for one hour of eucharistic adoration and the first Sunday of every month for Mass with the intention of peace. Archbishop Tin Win is the only Catholic leader to openly lend moral support to pro-democracy protesters; he stood with them on a street in Mandalay after the February 2021 coup. The archbishop has called on Catholics to not lose hope and to have a deep faith in God amid the fear, anxiety and hopelessness gripping their nation, ucanews.com reported. After more than five decades of military rule, Myanmar was on the road to democracy, but the political, economic and social freedoms that began to sprout in 2011 were abruptly ended by the military coup. The country has witnessed intense fighting between the military junta and rebel forces in the past few months in ethnic areas, including the predominantly Christian Kayah, Chin and Karen states, where civilians have been forced to leave their homes and flee to forests or take shelter in church institutions.

Pope: Synodality about listening to the Spirit, not a ‘majority consensus’

VATICAN CITY (CNS) – The synodal process is a path of engagement that makes room for the Holy Spirit, and not a “majority consensus like a parliament” to guide the universal church, Pope Francis said. Speaking with leaders of the French Catholic Action movement Jan. 13, the pope said that synodality is “not a plan or a program to be implemented” but “a style to be adopted” that listens to the spirit through the word of God, prayer and adoration. The French bishops’ conference had said the purpose of the meeting was for the Catholic Action leaders to present to the pope and other Vatican leaders a document titled “Being Apostles today.” The goal of the document, which is the culmination of two years of work by Catholic groups in France, is “to discern what unites them in their approach and their actions,” the bishops’ conference said in a press release. The French bishops’ conference also noted that the document aligns with the goals of the upcoming Synod of Bishops on synodality. 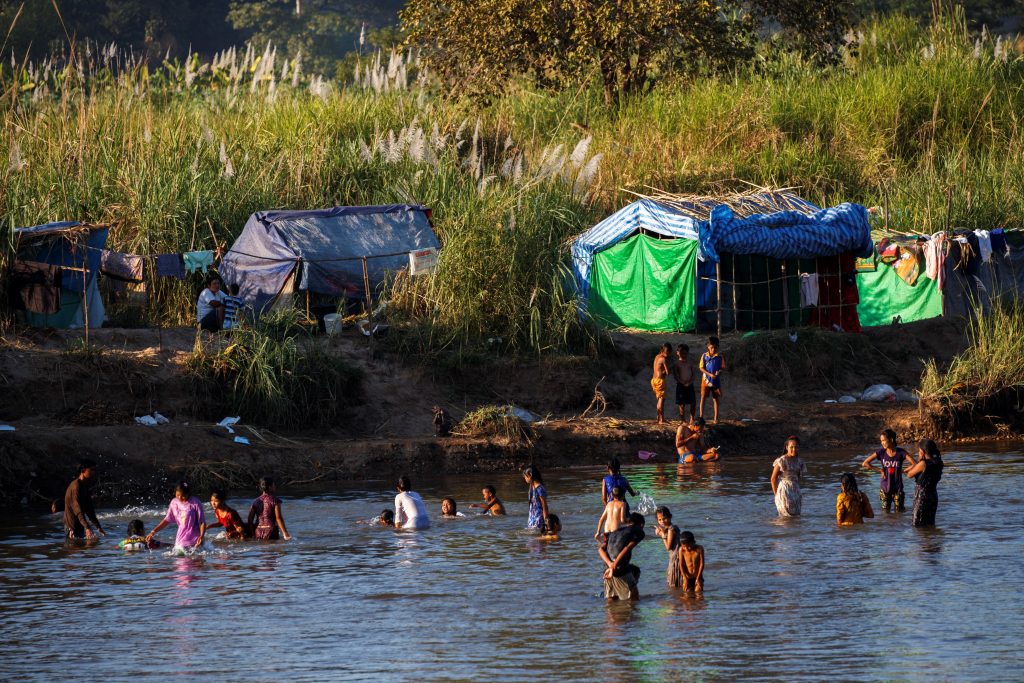 Myanmar refugees, who have fled a flare-up in fighting between the Myanmar army and insurgent groups and settled temporarily along the Moei River, bathe in the waters on the Thai-Myanmar border, in Mae Sot, Thailand, Jan. 7, 2022. Myanmar Archbishop Marco Tin Win of Mandalay has called for prayers for peace every Saturday as well as the first Sunday of every month. (CNS photo/Athit Perawongmetha, Reuters)