BETHANY BEYOND THE JORDAN, Jordan (OSV News) — The officially recognized site of Jesus’ baptism drew thousands of Catholics and others nationwide to the east bank of the Jordan River on Jan. 13 for a special Mass as COVID-19 restrictions dropped. Families, youth, dignitaries, nuns, and priests joined the pilgrims’ throng gathered first at the lush, reed-filled banks of the river as bagpipe music welcomed the faithful. Archbishop Pierbattista Pizzaballa, Latin Patriarch of Jerusalem, emphasized in his homily the importance of Bethany Beyond the Jordan, recorded in the New Testament as not only the place of Jesus’ baptism by John the Baptist, but for the act that heralded the start of Jesus’ public ministry. “It comes two months after Jordan’s official announcement to develop lands adjacent to the site” to accommodate pilgrims for longer stays in the area, Father Bader, Director of the Catholic Center for Studies and Media in Jordan told OSV News. Funds are needed for this project as well as for the completion of the church. More than 25 years ago, excavations began on the east bank of the Jordan River and uncovered the baptism site. Now Jordan wants the site to be more accessible and to be capable of hosting more tourists.

VATICAN CITY (CNS) — The death of Australian Cardinal George Pell was a shock because just five days earlier he had concelebrated the funeral of Pope Benedict XVI and “seemed in good health,” said Cardinal Giovanni Battista Re, Dean of the College of Cardinals. In his homily at Cardinal Pell’s funeral Mass on Jan. 14 in St. Peter’s Basilica, Cardinal Re described the Australian prelate as often being “a strong-willed and decisive protagonist” with “a strong temperament that, at times, could appear harsh.” Cardinal Pell died of a heart attack on Jan. 10 at a Rome hospital after undergoing hip surgery. He was 81. His burial was scheduled for Feb. 2 at St. Mary’s Cathedral in Sydney, where he had served as archbishop before Pope Francis chose him as prefect of the Vatican Secretariat for the Economy. The pope, who had praised the cardinal for keeping his faith “with perseverance even in the hour of trial,” arrived in St. Peter’s Basilica at the end of the Mass to preside over the final rite of commendation, as he usually does for cardinals who die in Rome.

WASHINGTON, D.C. (OSV News) — Just six months after the U.S. Supreme Court’s landmark Dobbs v. Jackson Women’s Health Organization decision that abortion is not a constitutional right, America’s pro-life advocates and health care providers are preparing for another consequential shift following the U.S. Food and Drug Administration’s finalization of a rule change that significantly expands availability of the abortion pill mifepristone. While a prescription is still necessary, patients will be able to acquire Mifeprex — and its approved generic — at retail pharmacies. Both Walgreens and CVS officials said they plan to offer mifepristone in states where it is legal. The FDA’s rule changes are challenging pro-life advocates to rethink effective, lifesaving strategies, from creating pro-life health clinics to digital ads. Molly Sheahan, Associate Director of Life & Family Advocacy at the California Catholic Conference, noted that with abortion pills and the internet, “The frontier on the issue of abortion isn’t necessarily the abortion clinic — it’s the mobile phone.”

UPPER MARLBORO, Md. (OSV News) — Dr. Martin Luther King Jr. is best honored when people “recall to mind and heart that the issues Dr. King placed before our nation have not been adequately accomplished,” and strive to continue his work, Cardinal Wilton Gregory said during a Jan. 15 Mass he celebrated honoring the late civil rights leader’s legacy. “Dr. King courageously and consistently invoked the truth of the Gospel in calling the men and women of our nation to live as sisters and brothers,” Cardinal Gregory, the Mass’s homilist, said at St. Joseph Church in Upper Marlboro, Maryland. “The truth that [Dr. King] announced reflected the light that is Christ Jesus.” The cardinal added, “We who are the followers of Christ in a Church that is simultaneously universal as well as one must be active participants in the healing of any residual wounds of racism, bigotry, and intolerance that still plague this wonderful ecclesial family of ours.”

Catholic Priest Burned to Death in Nigeria; Other Christians in Congo Killed

PAIKORO, Nigeria (OSV News) — Deadly violence hit Christians in Africa on Jan. 15, with a Catholic priest in northern Nigeria burned to death and as many as 17 Christians killed in a blast in eastern Congo. In Nigeria, Father Isaac Achi was burned to death at his residence in Paikoro, a local government area of Niger state. The armed men had set his house ablaze after a failed break-in at 3 a.m. Another priest who was at the house, identified only as Father Collins, was shot and injured as he tried to escape. It was not the first attack against Father Achi, who in 2011 survived an attack by Boko Haram, the north Nigerian militant group, at a Christmas church service. The attack left 44 parishioners dead. He also had been shot while blessing a child and had survived an abduction by militants. In the Democratic Republic of Congo, the death toll from a Jan. 15 church attack is an estimated 17 people, according to figures provided by DRC’s government spokesman, with some sources however saying 10 people were killed and 39 others were injured.

Health Care is a Universal Right, not a Luxury, Pope Says

VATICAN CITY (CNS) — Health care is not a luxury, it is a right that belongs to everyone, Pope Francis told health care workers. “A world that rejects the sick, that does not assist those who cannot afford care, is a cynical world with no future. Let us always remember this: health care is not a luxury, it is for everyone,” the pope said on Jan. 16 during a meeting with members of an Italian federation of professional associations of technicians and specialists working in the fields of radiology, rehabilitation, and preventative medicine. He expressed his deep gratitude for their work, especially during the pandemic. “Without your commitment and effort, many people who were ill would not have been looked after,” he said. “Your sense of duty inspired by the power of love enabled you to serve others, even putting your own health at risk.” In a world marked by a throwaway culture, the health professionals promote a culture of care, embodied in the good Samaritan, who does not look the other way, but approaches and helps a person in need with compassion, the pope said. People who are ill are “asking to be cared for and to feel cared for, and that is why it is important to engage with them with humanity and empathy” along with meeting the highest professional standards, he said.

Faith is a call to service and mission, pope tells U.S. seminarians

VATICAN CITY (CNS) — The call to faith in Jesus always is a call to service and mission, Pope Francis told seminarians, priests and staff of the Pontifical North American College. “Whenever Jesus calls men and women, he always does so in order to send them out, in particular to the vulnerable and those on the margins of society, whom we are not only called to serve but from whom we can also learn much,” the pope said Jan. 14. The college, a seminary in Rome sponsored by the bishops of the United States, has 116 students from 55 dioceses. Msgr. Thomas W. Powers, rector of the college, told Pope Francis: “The generous young men you see in front of you want to be like Jesus, the good shepherd. They know the Lord will use their eyes to seek out the suffering; their mouths to preach his Word, console the afflicted and make him present in the Eucharist; their hands to give strength to the sick and the dying and to heal those oppressed by sin; and their feet to go to the peripheries to lead the lost sheep home.” Pope Francis noted that the students’ years in Rome coincide with “the synodal journey that the whole church is presently undertaking, a journey that involves listening — to the Holy Spirit and to one another — in order to discern how to help God’s holy people live his gift of communion and become missionary disciples.” The same “challenge and task” is entrusted to those preparing for ordination, he said. “People nowadays need us to listen to their questions, anxieties and dreams so that we can better lead them to the Lord, who rekindles hope and renews the life of all.”

WASHINGTON, D.C. (OSV News) — The U.S. Catholic bishops marked Religious Freedom Day Jan. 16 by encouraging Catholics engaged in public life to examine their consciences and heed the late Pope Benedict XVI and Pope Francis in prioritizing truth and reason. Cardinal Timothy M. Dolan of New York, chair of the U.S. Conference of Catholic Bishops’ Committee for Religious Liberty, said in a statement, “Catholic Christians engage political life in various ways and at different levels.” He noted the responsibility of lay Catholics to “vote, advocate and serve in public office” and the role of bishops and clergy “to form consciences, both of lay voters and officials.” Cardinal Dolan called for Catholics to “dedicate ourselves to the cultivation of virtue to which freedom calls us, particularly the virtue of fortitude, that we may patiently and courageously bear witness to the truth in our public life. In this way, we will promote true freedom and bless our great country.” 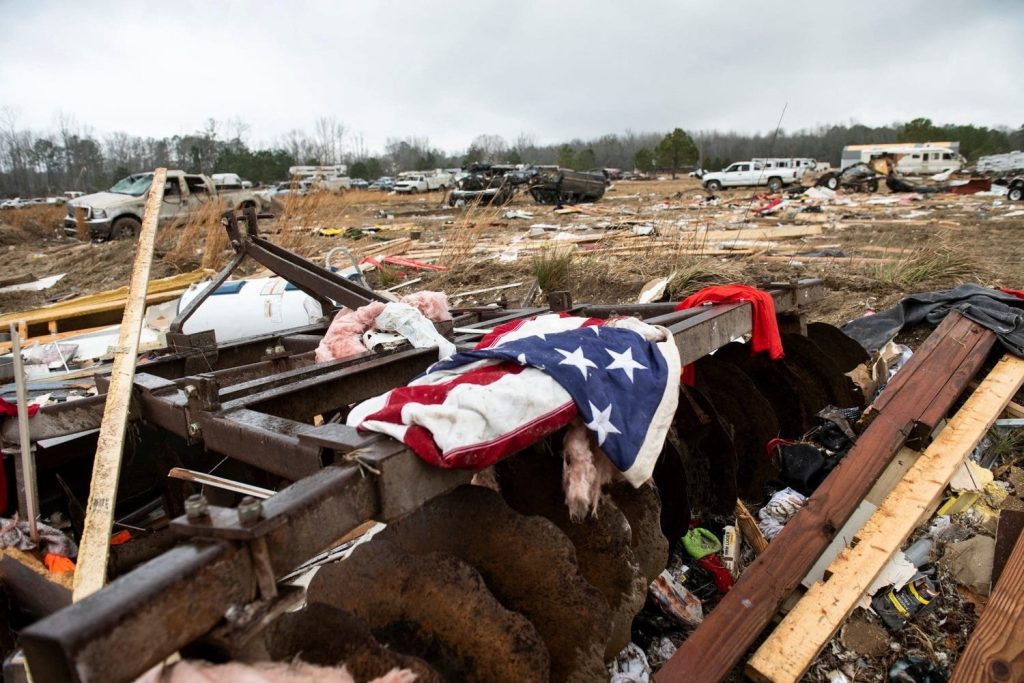 An American flag is draped on the remnants of a home destroyed in Old Kingston, Ala., Jan. 13, 2023, after a tornado ripped through the town. A giant, swirling storm system billowing across the South Jan. 11 killed at least six people in central Alabama, the Associated Press reported. (OSV News photo/Jake Crandall/USA Today Network via Reuters)