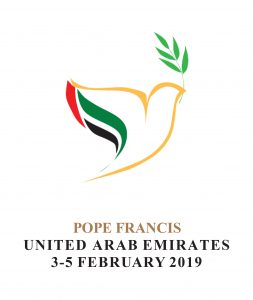 BEIRUT (CNS) — Catholics from around the world living in the United Arab Emirates are waiting with great anticipation for Pope Francis’ Feb. 3-5 visit, the first papal trip to the Arabian Peninsula. “Pope Francis is the ambassador of peace, courageously crossing borders and fostering personal encounters with religious leaders, heads of states and humanitarian organizations in the Arab world,” said Father Johnson Kadukkan, parish priest at St. Joseph’s Cathedral in Abu Dhabi, where Pope Francis will stop for a private visit Feb. 5 before celebrating Mass at Zayed Sports City Stadium. There are eight Catholic churches throughout the seven emirates of the UAE, with a ninth church under construction. Each church offers an extensive schedule of “weekend” Masses, all of which are full. Since the UAE is an Islamic country and Friday is considered a day of prayer for Muslims, Catholics attend weekend Mass on Friday or Saturday; Sunday is a workday. St. Joseph’s Cathedral in Abu Dhabi, for example, has about 90,000 parishioners, with eight priests celebrating nearly 20 Masses during the weekend in various languages: Arabic, English, Tagalog, Spanish, French, Italian, German, Korean,  Polish, Ukrainian, Urdu, Sinhalese and the Indian languages of Konkani, Malayalam and Tamil. “The rulers of the UAE have been benevolent and tolerant, allowing us to practice our faith in the places of worship, and for this we are very thankful,” Father Kadukkan said.

KYENJOJO, Uganda (CNS) —Not all that long ago, family members and residents of this small town in western Uganda mourned the loss of Sarah Baguma, who was stabbed to death by her husband in a domestic wrangle. Her cousin, Rachael Nabirye, told police that Baguma was stabbed six times in her abdomen and head. “My cousin’s husband accused her of returning home late before he began beating her,” said Nabirye, who was staying with the couple at the time of the attack. “They had been fighting every time, and we had advised them to separate. It’s very unfortunate that she had to die.” The killing highlighted how widespread domestic violence is in the East Africa nation. The situation is so serious that women religious of the Holy Cross Sisters have intervened by launching community discussions designed to increase awareness about the prevalence of family violence. During discussions, women and other stakeholders are given the opportunity to share their experience and identify the causes and possibly solutions to the violence they face. Participants learn about their legal rights and are encouraged to report any form of violence meted against them to authorities.

Bishop Howze dies at 95; was founding bishop of Diocese of Biloxi, Miss.

BILOXI, Miss. (CNS) — Bishop Joseph Lawson Howze, the founding bishop of the Diocese of Biloxi and the first black bishop in the 20th century to head a U.S. diocese, died Jan. 9. He was 95. A funeral Mass is to be celebrated Jan. 16 at Nativity of the Blessed Virgin Mary Cathedral in Biloxi with burial to follow in the new Bishops’ Prayer Garden behind the cathedral. “While we are saddened by the death of Bishop Joseph Lawson Howze, we rejoice in his life,” said Bishop Louis F. Kihneman III of Biloxi. “His was a life well lived in faithful service to almighty God and to the people of Mississippi, both as an auxiliary bishop of the Diocese of Natchez-Jackson and later as first bishop of Biloxi from 1977 to 2001.” Noting that establishing a new diocese was difficult work, Bishop Kihneman said Bishop Howze was “very proud of what he, with the help of devoted clergy, religious and laity, accomplished during his tenure” and was “forever grateful to the people of the diocese for their unfailing generosity of time, talent and treasure.” Despite deteriorating health in recent years, Bishop Howze remained interested in events in the diocese, Bishop Kihneman said. “He loved the Diocese of Biloxi and prayed unceasingly for its continued success. He had a genuine concern for the salvation of souls,” he added.

WASHINGTON (CNS) — Nationwide efforts to confront human trafficking received a boost in the new year as President Donald Trump signed a bill reauthorizing federal expenditures for prevention and assistance programs across the federal government. The Frederick Douglass Trafficking Victims Prevention and Protection Reauthorization Act allows $430 million in federal funds for trafficking prevention and education, victim protection and stronger government prosecution of traffickers through 2022. The president of the U.S. Catholic Sisters Against Human Trafficking welcomed the Jan. 8 signing of the law, for which it had advocated with members of Congress. “This comprehensive bill allocates funding for a number of projects that address the acute need for increasing awareness across a variety of sectors, prevention efforts and services for victims of both commercial sex and forced labor trafficking,” said Sister Anne Victory, a member of the Sisters of the Humility of Mary, told Catholic News Service Jan. 9. Rep. Chris Smith, R-New Jersey, introduced the legislation and shepherded it through Congress. Both houses of Congress overwhelmingly approved the measure. The U.S. Conference of Catholic Bishops was among supporters of the measure.

WASHINGTON (CNS) — Although the weeklong retreat for U.S. Catholic bishops emphasized quiet reflection, several bishops spoke out on social media during the retreat and after it wrapped up Jan. 8 with positive reaction about it and to give shoutouts to the retreat leader, Capuchin Father Raniero Cantalamessa, who has preached to popes and top officials of the Roman Curia for nearly 40 years. One bishop said listening to Father Cantalamessa was akin to being in the presence of the early Christian theologians. “Clear, intensely filled with the Holy Spirit, and all for the Kingdom of God,” Auxiliary Bishop Michael J. Boulette of San Antonio said in a tweet. “Let us continue to pray for one another, our church and our world. A blessing to be here!” Archbishop Paul D. Etienne of Anchorage, Alaska, tweeted that the retreat leader was a “true instrument of the Lord” and that the Holy Spirit was at work during the retreat. Bishop Lawrence T. Persico of Erie, Pennsylvania, described Father Cantalamessa’s talks and homilies as “powerful and engaging.” He tweeted that he was glad they had time to reflect and pray about their role as shepherds, stressing: “We must start there to be able to offer healing. I am taking this very seriously but feeling positive.” Boston Auxiliary Bishop Mark W. O’Connell said it was a “truly blessed experience” to be on retreat with Father Cantalamessa and fellow U.S. bishops.

ROME (CNS) — The formal recognition of the Orthodox Church of Ukraine brings “a wind of hope” that new opportunities will be created for dialogue and concrete cooperation in the search for Christian unity, said the head of the Ukrainian Catholic Church. Archbishop Sviatoslav Shevchuk, major archbishop of the Ukrainian Catholic Church, said he already has agreed with the Orthodox Church’s newly elected Metropolitan Epiphanius of Kiev to draw up a “road map” to examine where the two churches could work together. The archbishop made his comments in a long interview with Glavcom, a Ukrainian news site; the Ukrainian Catholic Church’s website published the English translation of the interview Jan. 10. Ecumenical Patriarch Bartholomew of Constantinople formally signed a “tomos” Jan. 5 recognizing the Orthodox Church of Ukraine, which was formed by members of three separate Orthodox communities, including one formally tied to the Russian Orthodox Church for more than 300 years. Patriarch Kirill of Moscow, head of the Russian Orthodox Church, which oversaw the largest branch of Orthodox faithful in Ukraine, strongly objected to the move and announced in October that his church was breaking its eucharistic communion with Constantinople.

VIENNA (CNS) — The Austrian Catholic Church will officially begin a year of honor Jan. 11 to remember the founder of Austria’s Catholic Habsburg Empire, Maximilian I, to mark the 500th anniversary of his death. The country’s decision to publicly honor a former Catholic ruler, who died Jan. 12, 1519, marks a noteworthy change in mainstream Austrian culture, which has sought to distance the country from its Christian past and national history in recent decades. A full year of scheduled national celebrations commending his reign has been dubbed the “Maximilian Year.” The Austrian military diocese will lead the liturgical celebrations with a special requiem Mass at St. George’s Cathedral, a basilica located inside the national military academy in Wiener Neustadt. Celebrations and Masses to honor Maximilian have been coordinated by Austrian Church and government authorities. The emperor is being commended for his Catholic beliefs, peace strategies and efforts to make peace between Christian leaders and the Ottoman Empire during his lifetime. He is also credited with arranging marriages between his family members to people of different countries to prevent wars.

Despite high turnover, number of Catholics little changed in Congress

WASHINGTON (CNS) — In most election cycles, there may be 30 to 50 new members of Congress. For 2019, there are 89 — and a 90th may yet be headed for Capitol Hill based on how a disputed House election in North Carolina plays out. Despite the broad turnover, the number of Catholics in the current Congress is little changed from that in the past Congress.

Two years ago, there were 168 Catholics in the House and Senate combined, a high-water mark. This year, for the 116th Congress, the number is down five, to 163. Pew’s biennial “Faith on the Hill” report notes that Catholics are the single largest denomination in Congress: The next highest, at 80, are “unspecified/other” Christians who are members of denominations smaller than the 16 listed in the Pew report, or those who did not specify their religious affiliation. Among those who specified a denomination, Baptists come in at 72 members in both the House and Senate, followed by Methodists at 42 and Jews at 34. Presbyterians, Lutherans and Episcopalians/Anglicans are each tied at 26 members apiece. The only other entries in double digits are Mormons and members of nondenominational churches, both with 10. While much has been made of two Muslim women now serving in the House this term, there are just three Muslims overall in Congress. There are five Orthodox Christians, three Hindus, two Buddhists and two Unitarian Universalists.