Indian government reversal: Missionaries of Charity can get foreign funds

NEW DELHI (CNS) — The Indian government has restored the Foreign Contribution Regulation Act registration of the Missionaries of Charity, clearing the decks for the globally renowned charity to receive and utilize foreign funds, reported ucanews.com. “I am delighted that the Indian government has restored our FCRA license,” said Sunita Kumar, spokeswoman for the order founded by St. Teresa of Kolkata. The change of decision comes less than a fortnight after the federal ministry for home affairs declined to renew the order’s FCRA registration, citing “adverse inputs.” “We never expected that our registration could be canceled, but it happened,” Kumar told ucanews.com Jan. 8, a day after the government restored the license of the charity organization. “We are happy that the restoration of our license happened without much delay.” The congregation was finding it difficult to carry forward its charitable works ever since news broke on Christmas Day that its application for renewal had been refused. The ministry issued a statement Dec. 27 saying the charity did not meet “eligibility conditions” under the FCRA and cited “adverse input” for its decision, without further details.

VATICAN CITY (CNS) – Competition, the market system and need to answer to stockholders can and do challenge business owners and leaders who want to put the needs of employees and the common good first, Pope Francis said. “Persevere and don’t be discouraged,” the pope told 90 business leaders from France Jan. 7. Accompanied by Bishop Dominique Rey of Fréjus-Toulon, the leaders were making a pilgrimage to Rome. “I find it very beautiful and courageous that, in a world often marked by individualism, indifference and even the marginalization of the most vulnerable, some entrepreneurs and business leaders have at heart the service of all and not just the service of private interests or restricted groups,” the pope said. “I have no doubt that this represents a challenge for you.” The pope said the clash between ideals and reality, which he spoke about Jan. 1 on the feast of Mary, Mother of God, also is at play in the lives of business leaders who want to operate “according to the heart of God,” but find themselves having to deal with “the economic and financial systems currently in place, which often make a mockery of the Gospel principles of social justice and charity.” When that happens, he said, the leaders must not “try to camouflage” the fact, but they must bring it to their prayer, which is the best place “to unify the beautiful and the ugly things of which life is made up, to grasp better the interweaving and the meaning in God’s perspective.”

NAIROBI, Kenya (CNS) – Bishop Wilybard Lagho of Malindi continued to call for calm in the Kenyan coastal region of Lamu, but said land disputes were behind the latest attacks, which have left at least seven people dead. The bishop told Catholic News Service there is credible evidence that the attacks are being perpetrated by local gangs with an aim of flushing squatters out of ranches. Leases of some of the ranches were recently revoked by the government. The bishop, whose diocese extends to Lamu Island, an Indian Ocean archipelago that lies about 60 miles from Kenya’s border with Somalia, appealed to the government to “move with speed to issue title deeds to genuine squatters.” Earlier reports had indicated that the attacks were being carried out by suspected al-Shabab militants. The Somalia-based al-Qaida affiliate has been blamed for past attacks in the region. On Jan. 3, the number of the dead reached seven after a 62-year-old man was killed in an attack, in which several houses were burned. The attacks started Jan. 2, with the kidnapping of one person, who was later shot dead in the village as another four were burned in their house. Two other people were kidnapped, and a village elder was found butchered. Those kidnapped are usually used to identify future villages for attacks, according to church sources.

DUBLIN (CNS) – Europe’s highest court has rejected an appeal from a Northern Ireland man who said he was discriminated against when a Christian-run company refused to bake him a cake with a pro-same-sex marriage slogan. After losing in the U.K. Supreme Court, Gareth Lee, a gay-rights activist, appealed to the European Court of Human Rights in Strasbourg, France. No appeal is possible. Lee said he is disappointed with the court’s refusal to hear the appeal, but several think tanks welcome the decision as a victory for religious freedom. The rejection of Lee’s appeal brings to an end an eight-year legal battle between Lee and Ashers Bakery in Belfast, Northern Ireland. Lee first took legal action in 2014 after the bakery – run by a Christian couple – refused to make a cake with the slogan “Support Gay Marriage.” The bakers, Daniel and Amy McArthur, said the slogan contravened their Christian beliefs about marriage. In a statement Jan. 6, Lee said: “None of us should be expected to have to figure out the beliefs of a company’s owners before going into their shop or paying for their services. … Everyone has freedom of expression, and it must equally apply to lesbian, gay, bisexual and trans people.”

HOUSTON (CNS) – As the late Bishop George A. Sheltz was placed into his funeral hearse, a chant of an ancient prayer suddenly filled the air. His fellow bishops and priests surrounded him while they chanted the “Salve Regina” (Hail Holy Queen), a fitting send-off for the Archdiocese of Galveston-Houston auxiliary bishop who dedicated his life to serving God and his people. Bishop Sheltz’s Dec. 31 funeral Mass gathered many people to honor his life, including Cardinal Daniel N. DiNardo of Galveston-Houston, who was the presider, and Father Jeff Bame, rector of Sacred Heart Co-Cathedral in Houston, who gave the homily. “Bishop Sheltz was my pastor, my bishop and my friend,” said Father Bame noting that the bishop, then-Father Sheltz, was his pastor while the priest was growing up at Prince of Peace Parish in Houston. “In over 50 years of priestly ministry, George Sheltz has reflected with his life, just how great is the assistance of God’s grace and goodness,” he said. “He lived his life as a sacrifice to God.”

Pope to install catechists, lectors at Word of God celebration

VATICAN CITY (CNS) — At his celebration of Mass for the Sunday of the Word of God Jan. 23, Pope Francis will formally install new catechists and lectors — ministries open to women. The Pontifical Council for Promoting New Evangelization, which coordinates the annual celebration, said the Mass celebrated by Pope Francis in St. Peter’s Basilica will include “the conferral of the ministries of lector and catechist.” Pope Francis formally instituted the ministry of catechist in May 2021. It followed his decision in January to open the ministries of lector and acolyte to women. While in most dioceses, women already served as readers and altar servers at Mass, they were not formally instituted in those services on a stable basis. The Sunday of the Word of God, instituted by Pope Francis in 2019, is meant to encourage among all Catholics interest in knowing the sacred Scriptures and their central role in the life of the church and the Christian faith. The theme for the 2022 celebration is “Blessed are those who hear the word of God,” a verse which comes from the Gospel of St. Luke. 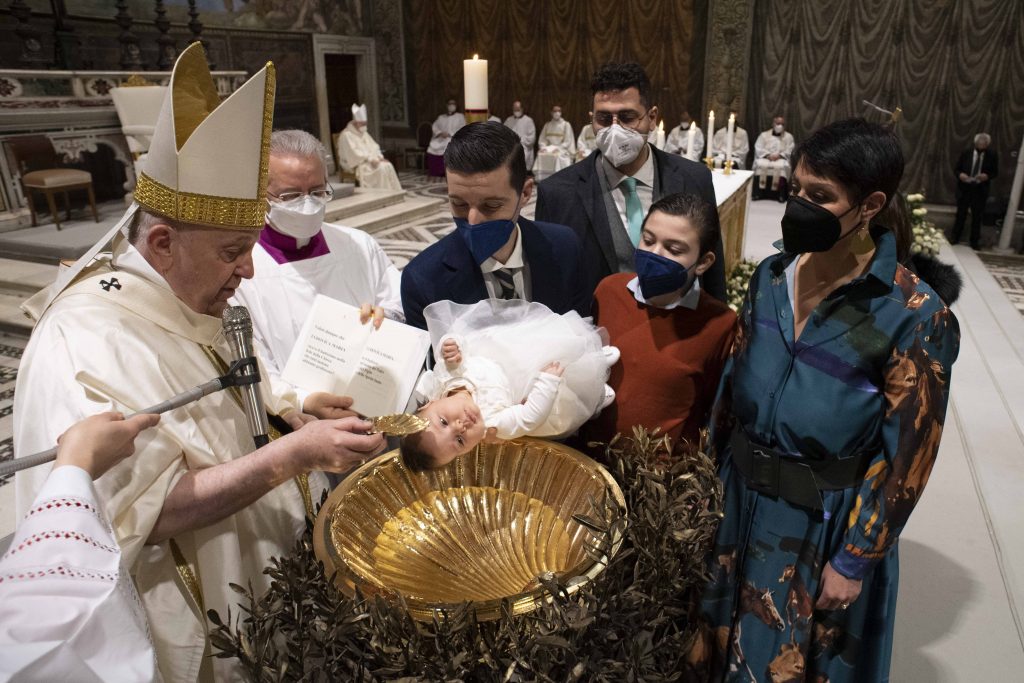 Pope Francis baptizes a baby during Mass marking the feast of the Baptism of the Lord in the Sistine Chapel at the Vatican Jan. 9, 2022. The pope baptized 16 infants. (CNS photo/Vatican Media)