ROME (CNS) — Soon after Pope Benedict XVI was laid to rest in the crypt of St. Peter’s Basilica, an Italian publisher released early copies of a book by the late pope’s secretary. Archbishop Georg Gänswein’s book, “Nothing but the Truth: My Life Beside Benedict XVI,” is filled with affection and admiration for Pope Benedict as a person, as a theologian, and as pope. The book includes the archbishop’s repeated insistence that Pope Benedict resigned of his own free will and fully aware of what he was doing in February of 2013, and even addresses, one by one, some of what he calls the “absurd” theories that cast doubt on the validity of the resignation. While Archbishop Gänswein makes clear Pope Benedict’s total recognition of Pope Francis as the reigning pope and Pope Francis’ real affection and admiration for Pope Benedict, he admits that he and Pope Francis did not and do not enjoy the same relationship. “Nothing but the Truth” was scheduled for release in Italian on Jan. 12 by Piemme, a publishing imprint that is part of the Mondadori company, but the text was released to reporters late on Jan. 5 after Pope Benedict’s funeral. Archbishop Gänswein wrote that Pope Benedict always was saddened by attempts to portray him and Pope Francis as opponents, “especially when the observation came from within the Vatican.” The differences between the two, in style and in theological approach, were “evident to all,” the archbishop wrote, but the problem was “not so much the existence of two popes, one reigning and one emeritus, as much as the birth and development of two cheering sections,” each claiming their pope was right and the other wrong.

VATICAN CITY (CNS) — The new Syriac Catholic archbishop of Homs, Syria, had spent almost five months as a prisoner of Islamic State rebels in 2015. Members of the synod of the Patriarchate of Antioch of the Syrians elected Msgr. Jacques Mourad archbishop of Homs and Pope Francis gave his assent to the election, Vatican officials announced on Jan. 7. Then-Father Mourad was abducted by Islamic State militants from Qaryatain, Syria, where he served as prior of the ancient Syriac Catholic Mar Elian monastery. The militants also kidnapped Boutros Hanna, a deacon. In a November 2015 interview with Catholic News Service, he spoke about being beaten and threatened by his captors, but also about how he and Hanna survived with prayer. Eight days into their captivity, a man dressed head-to-toe in black entered the room, he said, and he thought that was the end. To the two prisoners’ surprise, their would-be executioner did not treat them as though they were “infidels” (Christians), who are considered as impure and beneath fanatic Muslims: The man in black shook their hands, greeted them with “salam alaykoum” (peace be with you) and asked questions as if he would like to get acquainted. When Father Mourad asked, “Why are we here?” the masked man told the priest to consider it as a “khaelwe,” which in Arabic means a time of spiritual reflection, a spiritual retreat. “I needed this concept of a ‘spiritual retreat,’” the priest told CNS. “I felt that the Lord was speaking through this masked Muslim. It gave me a push to keep going.”

With House Speaker Race Over, Here’s What Catholics Can Expect from Next Congress

WASHINGTON, D.C. (OSV News) — Rep. Kevin McCarthy, R-Calif., was elected Speaker of the House on Jan. 7 after a tumultuous process that stretched across the first week of the new term. The 118th Congress began in Washington, D.C., on Jan. 3, and will continue for the two remaining years of President Joe Biden’s current term in the White House. The new Congress will likely be marked by significant partisanship, as Republicans take control of the House for the first time in Biden’s presidency and as the 2024 presidential campaign begins in earnest. During its tenure, the next Congress is also likely to offer a mixed bag of legislative results on issues of importance to Catholics. Some of those issues, including abortion and immigration, are cornerstones of increasingly partisan national debates. Matthew Green, Professor of Politics at The Catholic University of America in Washington, D.C. who studies Congress and American elections, told OSV News in an interview that Republicans and Democrats have “less incentive to compromise on abortion,” than previous decades as both parties develop more firm positions on the issue. In the past, pro-life Democrats, for example, were more plentiful in Congress.

WASHINGTON, D.C. (OSV News) — Members of President Joe Biden’s administration announced new immigration policies on Jan. 5, expanding the use of Title 42 while increasing legal paths for some individuals to seek asylum while remaining in their home countries instead of migrating to the southern border. Title 42 is a federal public health rule permitting immigration officials at the border to block migrants seeking asylum from entry. Former President Donald Trump’s administration implemented the rule in 2020 at the onset of the COVID-19 pandemic, but many saw the move as part of his broader attempts to reduce migration to the U.S. Bishop Mark J. Seitz of El Paso, Chairman of the USCCB’s Committee on Migration, in a statement, praised the new legal pathways while criticizing the policy overall, saying “many of the most vulnerable will be excluded from relief and subjected to dangerous circumstances, contravening U.S. and international refugee law, as well as Catholic social teaching.” He urged the administration to “reverse its present course in favor of humane solutions.”

TIONKUY, Burkino Faso (OSV News) — Father Jacques Yaro Zerbo, 67, a Malian-born Catholic Priest, was laid to rest on Jan. 5 at the Cemetery of Pastoral Agents in Tionkuy, 150 miles west of Ouagadougou, the capital of Burkina Faso. The priest was killed on Jan. 2 by unidentified armed men in what his bishop, Bishop Prosper Bonaventure Ky, who heads the Diocese of Dédougou, called “cold-blood murder.” Father Zerbo was on his way to Tona to accomplish a mission for his bishop when he was intercepted in the village of Soro in Gassan township found in the northwestern region of Boucle du Mouhon — one of Burkina Faso’s 13 administrative regions and a flashpoint of jihadist extremism. After killing the priest, the men escaped with his car, leaving his lifeless body by the roadside. Bishop Ky expressed “profound sorrow” at the killing of the priest and hoped he would find peace in the Lord. The killing added to a long list of persecution of Christians and other civilians and underscored the continued spread of terrorism in Burkina Faso and across the Sahel region.

WASHINGTON, D.C. (OSV News) — The U.S. Food and Drug Administration will allow retail pharmacies to offer abortion pills in the United States for the first time, agency officials announced on Jan. 3, prompting criticism from Catholic and pro-life groups. The Biden administration’s rule change comes in the wake of the Supreme Court’s decision last year in Dobbs v. Jackson Women’s Health Organization that struck down its previous ruling in Roe v. Wade, prompting many states to either attempt to restrict or expand access to abortion. The regulatory change will permit the retail sale of mifepristone, the first of two drugs used in a medication or chemical abortion. The drug could previously only be dispensed only by some mail-order pharmacies, doctors, or clinics. The new FDA rules will still require a prescription, but will permit a wider range of pharmacies to sell the drugs. “We decry the continuing push for the destruction of innocent human lives and the loosening of vital safety standards for vulnerable women,” Bishop Michael Burbidge of Arlington, Virginia, Chairman of the U.S. Conference of Catholic Bishops’ Committee on Pro-Life Activities, said in a statement. “This week’s action by the FDA not only advances the obvious tragedy of taking the lives of the preborn, but is also harmful to women in need.” 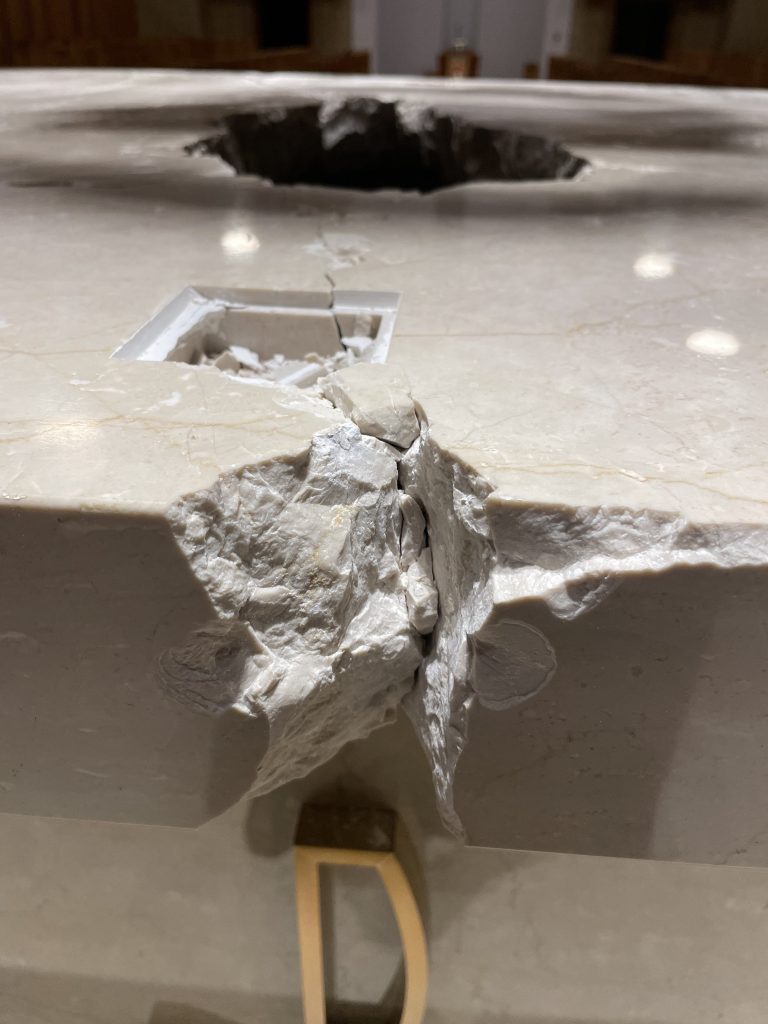 The damage to the altar at Subiaco Abbey Church in Subiaco, Ark., is pictured after the altar was destroyed and two reliquaries stolen at the abbey recently. A man was arrested Jan. 5, 2023, reported Arkansas Catholic, the newspaper of the Diocese of Little Rock. (OSV News photo/Arkansas Catholic)