WASHINGTON (CNS) — The budget bill passed by the House of Representatives to try to end the partial government shutdown includes a provision to repeal the “Mexico City Policy” that prohibits U.S. funding of foreign nongovernmental organizations that perform or promote abortion. Some House members and several pro-life organizations criticized the provision in the bill adopted Jan. 3, saying that it would end a policy that NGOs have managed to follow without a loss of health care funding. The same provision was included in the version of the spending bill passed unanimously by the Republican-led Senate Appropriations Committee in 2018. Democrats are using that bill in an attempt to end the partial shutdown. Rep. Chris Smith, R-New Jersey, was among the first to respond to the bill’s passage. In a statement, he called the provision a “poison pill” that “overturns a major, comprehensive, current-day pro-life policy.” The Mexico City Policy was first put in place by President Ronald Reagan in 1984. It was named for the city that hosted the U.N. International Conference on Population that year where Reagan unveiled it. The policy, now called Protecting Life in Global Health Assistance under President Donald Trump, has become a political ping pong ball, with Democratic administrations rescinding it and Republican administrations reinstating it. Trump re-established the policy in an executive order three days after taking office in 2017.

Hysterectomy can be morally licit in limited situations, Vatican says

VATICAN CITY (CNS) — The Catholic Church teaches that sterilization is morally unacceptable, but a hysterectomy could be morally acceptable if the uterus could not sustain a pregnancy, said the Congregation for the Doctrine of the Faith. Affirming past indications as to when a hysterectomy would be morally acceptable, the doctrinal congregation, in a note published Jan. 3, said that “when the uterus is found to be irreversibly in such a state that it is no longer suitable for procreation and medical experts have reached the certainty that an eventual pregnancy will bring about a spontaneous abortion before the fetus is able to arrive at a viable state,” it would be licit to remove the uterus with a hysterectomy. “Removing a reproductive organ incapable of bringing a pregnancy to term should not therefore be qualified as direct sterilization, which is and remains intrinsically illicit as an end and as a means,” it said. The response and accompanying note by the congregation was dated Dec. 10 and signed by its prefect, Cardinal Luis Ladaria, and secretary, Archbishop Giacomo Morandi. Pope Francis approved the congregation’s response and ordered its publication. The congregation reaffirmed the three responses it gave in 1993 to questions concerning “uterine isolation” or tubal ligation and “related matters.”

DUBLIN (CNS) — The primate of All-Ireland insisted that the country’s new abortion law that took effect Jan. 1 has “no moral force” and it “must be resisted” by Catholics. Archbishop Eamon Martin of Armagh, Northern Ireland, who also is president of the Irish bishops’ conference, said in a message to mark the legislation that the new law “in good conscience cannot be supported. In a May 22 referendum, voters opted by a margin of 2-1 to lift the country’s constitutional protection of the right to life of unborn children. The new law will permit abortion on demand up to 12 weeks’ gestation. It also will permit abortion up to 24 weeks on unspecified grounds for the health of the mother, and up to birth where the child is diagnosed with a life-limiting condition that means he or she may not live long after birth,” he said. Archbishop Martin urged Catholics to “continue to call and work diligently for its limitation, amendment and repeal.” A small group of demonstrators gathered for a symbolic protest outside the Irish parliament in Dublin Jan. 2. Ruth Cullen, spokeswoman for the Pro-Life Campaign, said that the protest stressed that the campaign to overturn the law continues.

Jesuit to remain as House Chaplain in new Congress

WASHINGTON (CNS) — A Jesuit whom former Speaker of the House of Representatives Paul Ryan sought to oust in 2018 will remain in his post as chaplain of the legislative body as the 116th session of Congress begins. Lawmakers voted late Jan. 3 to keep Jesuit Father Patrick J. Conroy, the 60th chaplain of the U.S. House of Representatives, in the post for the next two years. He began his term May 25, 2011. As the House chaplain, Father Conroy, 68, is responsible for offering a prayer at the beginning of each day when Congress is in session. The nondenominational prayer in the House chamber is broadcast live on HouseLive.gov and on C-Span. It’s also archived in the Congressional Record and is part of the official rules of the House to get the day started. But some suspect that one of Father Conroy’s prayers in 2017 is what moved former House speaker Ryan to try to oust the chaplain. Ryan was then trying to garner votes to pass a tax overhaul bill. “May their efforts these days guarantee that there are not winners and losers under new tax laws, but benefits balanced and shared by all Americans,” Father Conroy said in a Nov. 6, 2017, prayer, a time when lawmakers were debating how some of the proposed tax laws would affect the rich and the poor.

VATICAN CITY (CNS) — The surprising news in November that the Vatican had asked U.S. bishops not to vote on several proposals for responding to the sexual abuse crisis was motivated by a lack of time given the Vatican to study the proposals and potential conflicts with Church law, according to a letter obtained by the Associated Press. AP reported Jan. 1 it had obtained the letter written Nov. 11 by Cardinal Marc Ouellet, prefect of the Congregation for Bishops, to Cardinal Daniel N. DiNardo of Galveston-Houston, president of the U.S. Conference of Catholic Bishops, asking that the votes be delayed. Cardinal DiNardo informed the bishops of the Vatican’s request Nov. 12, at the start of their fall meeting, the agenda of which was primarily focused on the sexual abuse crisis and the accountability of bishops. “Considering the nature and scope of the documents being proposed by the (conference), I believe it would have been beneficial to have allowed for more time to consult with this and other congregations with competence over the ministry and discipline of bishops,” Cardinal Ouellet wrote, according to the AP, which also reported that a draft of the U.S. proposals arrived at the Vatican only Nov. 8. In response to questions from AP, Cardinal DiNardo said, “It is now clear there were different expectations on the bishops’ conference’s part and Rome’s part that may have affected the understanding of these proposals.” 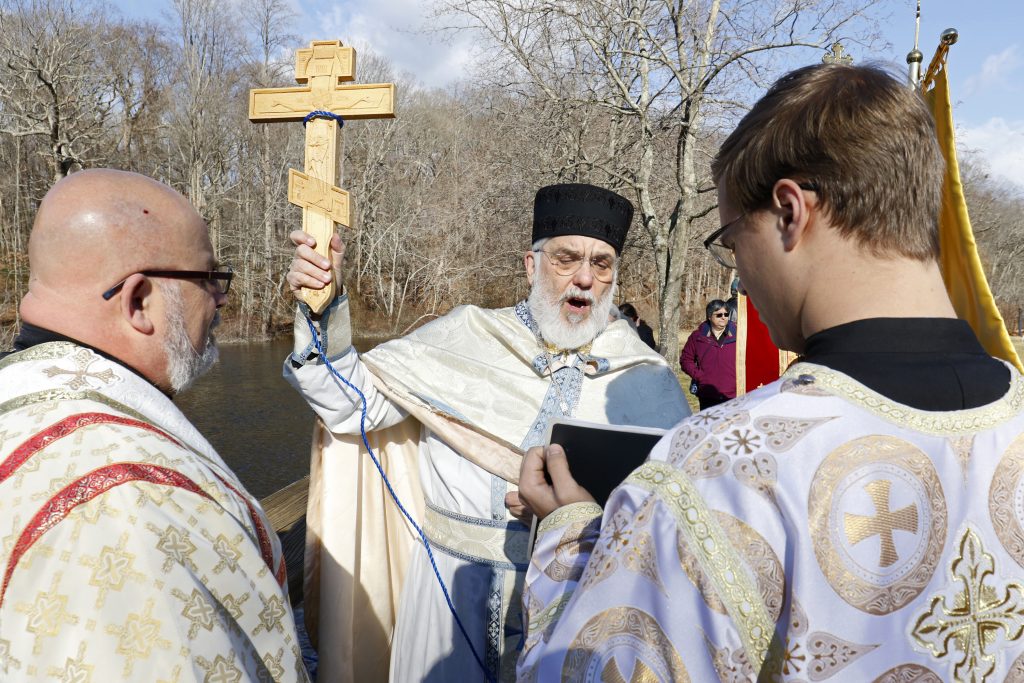 Father Tyler Strand of Resurrection Byzantine Catholic Church in Smithtown, N.Y., holds a crucifix as he blesses the waters of the Nissequogue River in Smithtown during a prayer service Jan. 6 marking the feast of the Theophany. The feast, celebrated by Eastern churches, commemorates the revelation of the Holy Trinity through Christ’s baptism in the Jordan River. (CNS photo/Gregory A. Shemitz)