WASHINGTON (CNS) — The U.S. Conference of Catholic Bishops, Catholic Charities USA and the Catholic Legal Immigration Network, known as CLINIC, expressed disappointment with the Supreme Court’s Jan. 27 order allowing the Trump administration to go forward with a new rule meant to limit immigrants’ use of government benefit programs. The court’s “unprecedented ruling” in favor of the administration’s revisions to government policy “harms families, targets lawful immigrants, and could prevent families from receiving vital nutrition and housing assistance,” said a Catholic Charities USA statement. Dominican Sister Donna Markam, president and CEO of Catholic Charities USA, urged the Trump administration “to reconsider this harsh and unnecessary policy and rescind it in its entirety.” She said the decision in favor of this policy “signals a watershed change of course from the best moments of our American heritage of welcoming immigrants and refugees.” In its 5-4 ruling, the court gave the Trump administration the go-ahead with its “public charge” rule allowing the administration to deny green cards to legal immigrants based on their reliance on public assistance such as food stamps, Medicaid and housing vouchers. The rule was challenged by immigration groups and states including California, Illinois, Maryland and Washington. Legal challenges continue in several federal courts, and a separate injunction still blocks the rule from being implemented in Illinois.

WASHINGTON (CNS) — U.S. focus on reducing misery around the world has paid off — a key reason for continuing aid at current levels if not stepping it up, according to an official with the U.S. Conference of Catholic Bishops. Child mortality in Africa, for instance, was the highest in the world at 30% in 1950, according to Steve Hilbert, USCCB Africa and global development policy adviser. Africa still leads in the infant mortality rates — which means deaths before age 5 — but the rate is now 7%. “That’s a huge drop,” Hilbert said. “Imagine knowing in 1950 that one of your three children is going to die. … For moms and dads, that’s a big deal.” In 1970, the vast majority of men ages 15 and up with no education lived in Asia. “By 2020, it has dropped greatly, and is projected to drop even more now,” he said during a Jan. 27 policy presentation, “New Approaches in International Assistance,” during the Catholic Social Ministry Gathering in Washington. In Africa, the number of uneducated men has plateaued at about 100 million, and the number is expected to stay the same through 2050. “Millions of uneducated men with nothing to do — that’s a grenade waiting to go off,” Hilbert said. “They join militia groups, and they become fodder.”

Doctrine is renewed with roots firmly planted in magisterium

VATICAN CITY (CNS) — Christian doctrine is not modified to keep up with passing times nor is it rigidly closed in on itself, Pope Francis told members and advisers of the doctrinal congregation. “It is a dynamic reality that, staying faithful to its foundation, is renewed from generation to generation and is summed up in one face, one body and one name — the risen Jesus Christ,” he said. “Christian doctrine is not a system that is rigid and closed in on itself, but neither is it an ideology that transforms with the changing of seasons,” he said Jan. 30, during an audience with cardinals, bishops, priests and laypeople who were taking part in the plenary assembly of the Congregation for the Doctrine of the Faith. The pope told them that is was thanks to the Risen Christ that the Christian faith throws its doors wide open to every person and his or her needs. That is why handing on the faith “demands taking into account the person receiving it,” and that this person be known and loved, he said.

WASHINGTON (CNS) — For Aimee Murphy, executive director of Rehumanize International, becoming a Catholic and joining the pro-life movement inspired her vocation. Murphy was only 22 when she founded the human rights organization, which seeks to end “all aggressive violence against humans through education, discourse and action.” At that point in her life, she had been part of the pro-life movement for roughly six years. She told an audience at Georgetown University Jan. 25 that when she was 16, her former boyfriend sexually assaulted her and threatened to kill her if she didn’t get an abortion. “I just straight up understood at that moment, even though I had been pro-choice until then, that violence could not be the solution to a crisis,” said Murphy. “I couldn’t do to an unborn child the same thing that he was doing to me, which was not valuing humanity.” She made the comments during a breakout session at the 21st annual Cardinal O’Connor Conference on Life. Organized completely by students, the conference is the largest student-run pro-life conference in the nation.

JERUSALEM (CNS) — Calling U.S. President Donald Trump’s Peace-to-Prosperity plan a “unilateral initiative,” church leaders in the Holy Land said it did not give “dignity and rights” to the Palestinians. “This plan will bring no solution but rather will create more tensions and probably more violence and bloodshed,” the Assembly of the Catholic Ordinaries of the Holy Land said in a statement Jan. 29. The group includes Catholic bishops and patriarchs of different rites as well as the Franciscan custos of the Holy Land and one nun. In the long-awaited plan, which Trump called the “deal of the century,” the president proposed the possibility of a future independent Palestinian state and the recognition of Israeli sovereignty over West Bank settlements, creating Israeli enclave communities. The plan also recognizes Jerusalem as Israel’s capital while allowing for a Palestinian capital in villages on the outskirts of East Jerusalem, where, according to the plan, the U.S. would build a future embassy to the Palestinian state. But, the church leaders said in their statement, such proposals must be reached with the agreement of both the Israelis and the Palestinians. “These proposals have to be based on equal rights and dignity,” they added. “The plan Peace-to-Prosperity, presented yesterday, does not contain these conditions.”

WASHINGTON (CNS) — If you met Dorothy Day, you were changed, said panelists at a Jan. 27 discussion following an advance screening of a new documentary, “Revolution of the Heart: The Dorothy Day Story,” which profiles the co-founder of the Catholic Worker Movement. And if you were changed, they noted, you had the ability to make change yourself. “Dorothy taught me to pay attention and feel the sufferings of others,” said Martha Hennessy, one of Day’s granddaughters, during the forum at Georgetown University in Washington. “Dorothy gives us hope. Dorothy gives us courage to do what we need to do in our times to if we need want to be called disciples of Christ,” she added. Hennessy is a member of the Kings Bay Plowshares 7. They face prison terms of up to 20 years after being convicted on charges related to their faith-based nonviolent and symbolic disarming of a Trident submarine’s nuclear weapons in Georgia. She had a “curfew” of 8:30 p.m., and left following the discussion. Robert Ellsberg, publisher of Orbis Books and editor of Day’s writings, recalled, “I didn’t know I was going to spend so much time there” at Mary House, the first Catholic Worker house of hospitality in New York City, after he decided to take a year off from Harvard College. Attracted to the Catholic Worker’s peace witness, “I knew there was a kind of learning I couldn’t do in school,” he said. Day made Ellsberg, then 20, editor of the Catholic Worker, its monthly newspaper.

Holocaust is ‘an archetype’ of man’s capacity for evil, says archbishop

PHILADELPHIA (CNS) — The anniversary of the liberation of Auschwitz-Birkenau concentration camp in Oswiecim, Poland, is “a solemn and mournful opportunity to reflect upon man’s capacity for evil,” said Metropolitan-Archbishop Borys Gudziak of the Ukrainian Catholic Archeparchy of Philadelphia. “Human sin has caused untold suffering in history,” the archbishop said. “The Holocaust is an archetype of this sinful capacity. The Shoah is a quintessential sign of the potential of human depravity. Evil is real. It needs to be named and confronted.” The archbishop issued his statement on International Holocaust Remembrance Day, observed around the world Jan. 27. He said the remembrance was a time to honor all those who perished as well as “those who heroically sought to save the condemned.” Operated from 1940 to 1945, Auschwitz was the Nazi’s largest camp and consisted of three parts: Auschwitz I, where many were imprisoned and murdered; the Birkenau extermination camp — also known as Auschwitz II — and Auschwitz III (Auschwitz-Monowitz), an area of auxiliary camps that included several factories. “The Nazi crimes and those of their collaborators are to be condemned as well as all anti-Semitism that regrettably is raising its ugly head in our country and in many countries of the world,” Archbishop Gudziak said. 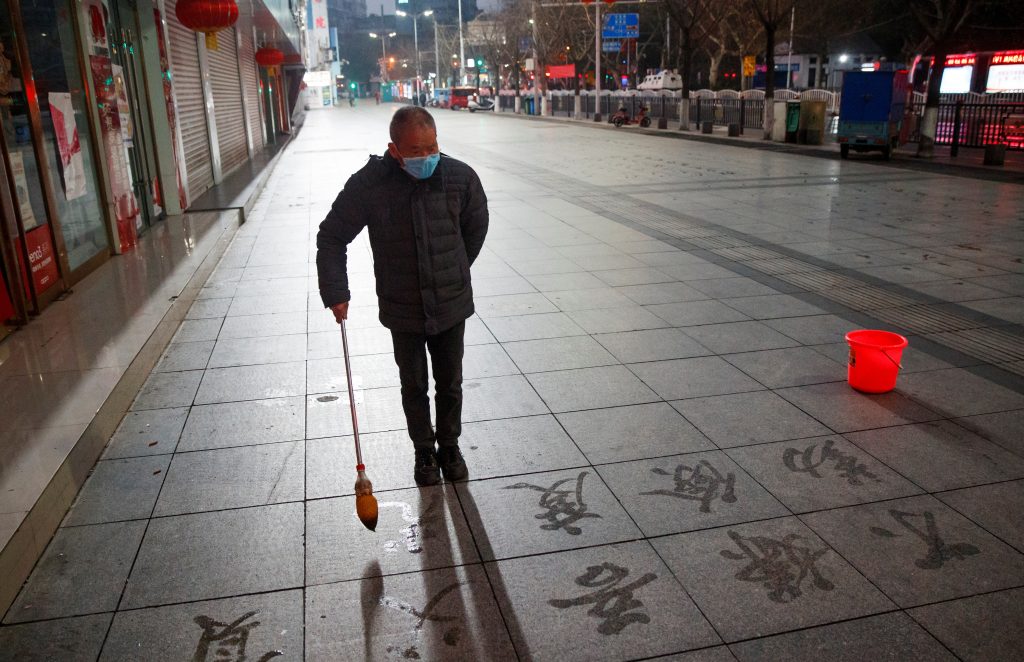 A man in Jiujiang, China, wears a face mask Feb. 3, 2020, as the country is hit by the coronavirus. The Vatican press office confirmed a report that appeared in the Chinese newspaper The Global Times, which said that since Jan. 27, the Vatican has sent 600,000-700,000 protective masks to China. (CNS photo/Thomas Peter, Reuters)