HO CHI MINH CITY, Vietnam (CNS) – A Dominican priest serving ethnic groups in Vietnam’s Central Highlands was stabbed to death while he was hearing confession. An informed source from Kon Tum told ucanews.com that Dominican Father Joseph Tran Ngoc Thanh, who provided pastoral care for ethnic groups in Kon Tum province, was stabbed in a church on Jan. 29. The source said Father Thanh, 40, died hours after being hospitalized, reported ucanews.com. Local police said they arrested his killer, who is reported to be a drug abuser. Bishop Louis Nguyen Hung Vi of Kon Tum, who celebrated a memorial Mass for Father Thanh Jan. 30, said he was stunned with grief by the priest’s sudden death. He said he never thought such a horrific story would happen before Tet, the Lunar New Year holiday. “We could not understand God’s plans except for offering our brother to him,” Bishop Vi said.

Pope to meet university students as part of synodal process

ROME (CNS) – Highlighting the importance of a Church that truly listens, Pope Francis will participate in a virtual meeting hosted by Loyola University in Chicago with students from North, Central and South America. The Feb. 24 virtual meeting, titled “Building Bridges: A Synodal Encounter between Pope Francis and University Students,” will be an opportunity to “address the salient challenges of our times,” the university’s website said. “The pope will dialogue with these university students who will share concrete educational projects that seek to justly transform environmental and economic realities,” as well as discuss the challenges of migration, it said. Speaking with Catholic News Service Jan. 28, Michael Murphy, director of Loyola’s Hank Center for the Catholic Intellectual Heritage, said he and several colleagues, including Emilce Cuda, an official at the Pontifical Commission for Latin America, discussed the idea of an event for university students in preparation for the upcoming Synod of Bishops on synodality. In November, he said, while discussing possible speakers for the event, “we kind of joked, ‘Hey, let’s see if Pope Francis is free.’”

NEW BLAINE, Ark. (CNS) – As society gets more anxious, divisive and turbulent with each passing day, Hesychia House of Prayer has been a beacon of stability and peace. There is something awe-inspiring in pulling into the 40-year-old hermitage amid the backdrop of the distant Ozark Mountains, the cattle grazing and 300 rolling acres the Benedictine sisters credit to God. “Deep down, the fact that this property, this space has been dedicated explicitly, explicitly for God since 1879, it’s permeated with prayer over a century,” said Benedictine Sister Louise Sharum, Hesychia’s founding director, about the property owned by the Benedictines. Hesychia is a ministry of the Benedictines’ St. Scholastica Monastery, but last July the religious order began a partnership with the Religious Sisters of Mercy to lead the house of prayer. Two members of that order, Sisters Lisa Atkins and Anita DeSalvo, were chosen to be Hesychia’s director and assistant director, respectively. In 1981, the blessing of Bishop Andrew J. McDonald, then-bishop of Little Rock, Arkansas, Sister Louise and two other sisters began the Hesychia House of Prayer. “Hesychia” is Greek for “resting in God.” It is open to anyone who desires to connect with God without distractions. This can mean staying for a night or weekend to even months or years. More about Hesychia House of Prayer can be found at stscho.org/hesychia.html.

VATICAN CITY (CNS) – Presenting a budget projection that foresees a deficit of $37.1 million in 2022, the prefect of the Vatican Secretariat for the Economy said he believes the Vatican is on the path to honesty and transparency in financial matters. “We are well aware that we have made major mistakes in financial management, which have undermined the credibility of the Holy See. We seek to learn from them, and we believe we have remedied them so that they do not happen again,” the prefect, Jesuit Father Juan Antonio Guerrero Alves, told Vatican News. On Jan. 28, the secretariat released the Vatican’s 2022 “mission budget,” reflecting a new approach to reporting the income and expenses of the offices of the Roman Curia and related institutions. The “mission budget” includes not just the Vatican Secretariat of State, apostolic nunciatures around the globe and the dicasteries, councils and commissions of the Roman Curia, Father Guerrero said. It also includes entities that “are either the property of the Holy See or depend on and are under the financial responsibility of the Holy See,” including the Bambino Gesù Pediatric Hospital in Rome, the four major basilicas of Rome and the shrines of Loreto, Pompei and Padua. The Casa Sollievo della Sofferenza, the hospital in San Giovanni Rotondo founded by St. Padre Pio, will be included in next year’s budget, he said. The combined budget of the 60 entities that were part of the previous Holy See budget would have been close to 300 million euros ($334 million) for 2022, but with the addition of the 30 new entities into the “mission budget,” the combined budget for 2022 is close to 800 million euros, he said.

People must never forget or repeat horrors of Holocaust

VATICAN CITY (CNS) – The cruelty of the Holocaust must never be repeated, Pope Francis said on the eve of the international day of commemoration in memory of the victims of the Holocaust. The day, celebrated Jan. 27, falls on the anniversary of the liberation of the Auschwitz-Birkenau extermination camp complex in 1945. At the end of his weekly general audience at the Vatican Jan. 26, Pope Francis said, “It is necessary to remember the extermination of millions of Jews and people of different nationalities and religious faiths. This unspeakable cruelty must never be repeated,” he said. “I appeal to everyone, especially educators and families, to foster in the new generations an awareness of the horror of this black page of history. It must not be forgotten, so that we can build a future where human dignity is no longer trampled underfoot,” the pope said.

ST. PETERSBURG, Fla. (CNS) – Serenity and grace are two things Kayla credits for saving the life of her new baby girl. “The Serenity Prayer is constantly teaching me to accept things I cannot change, have courage to change things that I can, and have wisdom to know the difference. Despite my shortcomings and failures, God’s grace is sufficient,” said Kayla, who used only her first name in an interview with Gulf Coast Catholic, the news outlet of the Diocese of St. Petersburg. In 2020, the mother of two discovered she was pregnant with her third child and considered having an abortion. “I was in a very uncertain place, in a sense, and I had this big decision to make. I had all my reasons why, and I decided I didn’t want to go through with it,” Kayla said. At an abortion facility, she was administered the first pill in a series to induce a chemical abortion. The chemical procedure, commonly called the “abortion pill,” is a two-part, two-day process. “I just cried and held my stomach. I cried out to God to please save my baby,” said Kayla. Through an online search, she learned about the successes of the abortion pill reversal protocol, or APR. It’s a way to counter the first abortion pill using a decades-old treatment utilized to prevent miscarriages by prescribing women progesterone. To learn more about the abortion pill reversal protocol, go to https://www.heartbeatinternational.org.

ROME (CNS) – A cardinal who had served as an aide to now-retired Pope Benedict XVI and was present for his meetings with survivors of clerical sexual abuse said he “never found in him any shadow or attempt to hide or minimize anything.” The depths of human sin and depravity “distressed him intimately, and he sometimes remained silent for a long time – all the more so if these human miseries were the responsibility of men of the church,” said Cardinal Fernando Filoni, grand master of the Equestrian Order of the Holy Sepulchre of Jerusalem. The cardinal distributed his “testimony” about Pope Benedict to the media on Jan. 28, saying he wanted to present an eyewitness account of how Pope Benedict reacted to allegations of clerical sexual abuse and, especially, to the survivors of abuse in the wake of reports about the retire pope’s handling of cases when he was archbishop of Munich. A report released Jan. 20 said then-Cardinal Joseph Ratzinger mishandled four cases. Cardinal Filoni, who was the “sostituto” or substitute for general affairs in the Vatican Secretariat of State from 2007 to 2011, said that in that role, he met with then-Pope Benedict at least once a week and, in addition, oversaw the organization of papal trips abroad. “He had a clear sensitivity for the victims,” the cardinal said. “When, in preparation for apostolic trips – to the United States, Australia, etc. – he received requests for meetings with victims of abuse, he spoke to me about it; he wanted to know my thoughts on how to accommodate these requests,” the cardinal said. 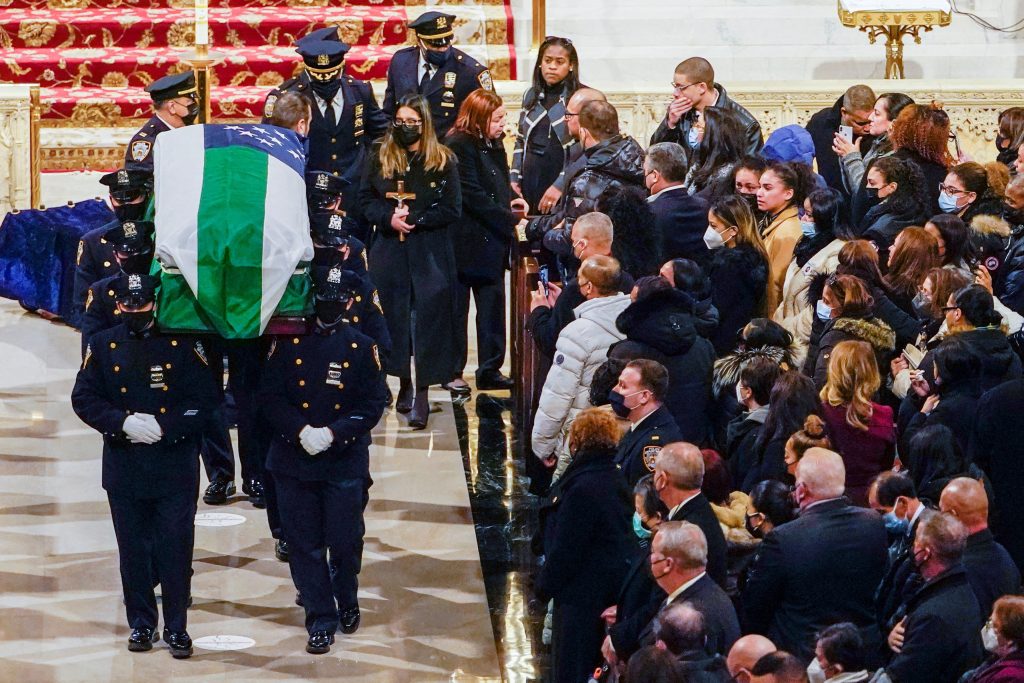 Dominique Rivera, wife of Officer Jason Rivera of the New York Police Department, walks behind her husband’s casket holding a cross after his funeral Mass at St. Patrick’s Cathedral Jan. 28, 2022. Rivera was killed in the line of duty while responding to a domestic violence call. (CNS photo/Mary Altaffer, Pool via Reuters)