MEXICO CITY (CNS) — Mexico’s bishops offered prayers for the victims of an explosion in which dozens of villagers in the central state of Hidalgo perished after rushing to get some of the gasoline gushing from what appears to have been an illegally tapped pipeline. “This situation has provoked a commotion throughout the country,” the bishops wrote in a Jan. 19 statement, “so we join the prayers and the tears shed by everyone who is suffering and crying at this time.” Priests in the Diocese of Tula provided spiritual support, visited the injured and started the process of saying funeral Masses for the deceased. But some priests and bishops have voiced support for a government crackdown on fuel thefts, a crime that has sent the homicide rate soaring in several states. The newspaper Reforma quoted Father Arturo Santos said at a funeral Mass as saying: “We pray so we never have this sad, painful and — why not say it — shameful experience again.” The explosion occurred at 6:50 p.m. Jan. 18 in the town of Tlahuelilpan, 55 miles north of Mexico City, claiming 89 lives and sending dozens more to the hospital, said Hidalgo Gov. Omar Fayad.

HOUSTON (CNS) — The morning after a man gunned down his estranged wife and critically wounded their daughter, visitors and parishioners gathered Jan. 18 for a Mass inside the Christ the Redeemer Catholic Church, just yards away from the parish parking lot, where the shooting took place. The “beautiful” Mass was “well-attended,” according to Father Sean Horrigan, pastor. The quiet gathering was a stark contrast to the previous night that was shattered by gunshots: Arthur Edigin, 62, had shot into the car of his wife, Graciela Torres, 66, his daughter Penny Edigin-Zapata, 31, and his 17-month-old granddaughter. “The reality of the evil of domestic violence played itself out in our presence last night, but we cling to the love and goodness of God in times of such trials,” Father Horrigan said. “We seek to be bearers of light and peace in the world, and work to provide a place of safety and surety for all who face such realities in their homes.” Even though the shooting victims were not parishioners at the northwest Houston church, Father Horrigan gave his assurance the Catholic Church stands with and for them and all affected by domestic violence. “God brought them to us and we will respond as Christ to them,” he said. “If you or anyone you know is experiencing such physical or emotional abuse

TRENTON, N.J. (CNS) — Retired Bishop John M. Smith of Trenton died Jan. 22 in Morris Hall Meadows, a long-term care facility in Lawrenceville, after a long illness. He was 83. Bishop David M. O’Connell, who succeeded Bishop Smith as head of the diocese in 2010, told the diocese in a statement it was his “sad duty” to announce the death of his predecessor. St. Mary of the Assumption Cathedral in Trenton received the late bishop’s body the afternoon of Jan. 25. The celebration of the Mass of Jesus Christ the High Priest took place that evening. A funeral Mass was celebrated Jan. 26. Afterward, Bishop Smith was entombed in the mausoleum of St. Mary Cemetery in Trenton. Bishop Smith, a New Jersey native, headed the Trenton Diocese from 1997 to 2010. Before that, he was coadjutor bishop from two years and then he succeeded his predecessor, Bishop John C. Reiss, when he retired. Before returning to his home state as a bishop, Bishop Smith headed the Diocese of Pensacola-Tallahassee, Florida, from 1991 to 1995 and before that, he was an auxiliary bishop of the Archdiocese of Newark for three years. Newark was his home archdiocese; he was ordained a priest there May 27, 1961.

PANAMA CITY (CNS) — Panama City has skyscrapers, bumper-to-bumper traffic, and a population of 880,000 within the city limits — more than 1.5 million in the metropolitan area. Yet a group of pilgrims from Indiana found warmth and the diversity of the Catholic Church while attending World Youth Day in the bustling city center. From encountering friendly and welcoming Uber drivers and watching other pilgrims dance to sharing the Catholic faith and spirit, the experience has been a joyful one, said a group from the Diocese of Fort Wayne-South Bend, Indiana. They spoke to Catholic News Service Jan. 23 at the FIAT Festival, an event aimed at U.S. pilgrims. “It’s a unique experience,” said Leo Patiño of Warsaw, Indiana, a city of about 14,700. Patino, attending World Youth Day for the first time, said he had found exactly what Archbishop Jose Ulloa Mendieta spoke about at the event’s opening Mass — the warmth of the Panamanian people. “Everyone has been very friendly,” said 17-year-old Sophia Rodriguez of South Bend. Even when the group went looking for hard-to-find Mexican food in Panama City, particularly tortillas, which are not a staple food here, Panamanians told them to call ahead of time and they would do what they could to accommodate them.

VATICAN CITY (CNS) — Despite some new tensions, “practically the whole of Christianity is in a process of advancing beyond the controversies and competition of the past, toward greater understanding, trust and solidarity,” said Bishop Brian Farrell, secretary of the Pontifical Council for Promoting Christian Unity. Writing in The Tablet, a London-based international Catholic weekly, Bishop Farrell said, “Pockets of mutual rejection and contention remain, but most of the world’s Christians have come to recognize one another as brothers and sisters in Christ, united in a common baptism and giving a common witness in serving the needs of suffering humanity.” The bishops’ article was published Jan. 24 during the Week of Prayer for Christian Unity. To illustrate how “not all is plain sailing” in the search for Christian unity, Bishop Farrell pointed to the challenges posed by a dispute within Orthodoxy over the question of authority and by a controversy within the Catholic Church over allowing the husband and wife in a Catholic-Protestant marriage to receive Communion. The tensions within the Orthodox Church, particularly between the Ecumenical Patriarchate of Constantinople and the Russian Orthodox Church over the ecumenical patriarch’s recognition of the independent Orthodox Church of Ukraine, have implications for the Catholic-Orthodox dialogue as well, the bishop said.

PANAMA CITY (CNS) — Thousands of World Youth Day pilgrims stopped by the Jama Mosque Jan. 24 en route to catch a glimpse of Pope Francis. “Brothers, sisters, you need water,” Hashim Bhana yelled at them from under a tent that announced a “hydration center” outside the mosque, a place where pilgrims could pick up free water, or catch some needed shade and a smile as they struggled to stay hydrated under the blazing sun. “This is an event for the good of young people, it benefits them so how could we say no” to helping them, said Bhana. While hundreds of vendors sold water to the thirsty, the Muslim community at the oldest mosque in Panama City gave it away for free near a banner that said, “Welcome Pilgrim Friends.” By the time Pope Francis had arrived at Santa Maria la Antigua Field, they had handed out 15,000 bottles and were looking for more because of the demand, said Bhana. In Panama City, people of different religions get along well, he said, so the gesture was not unusual. 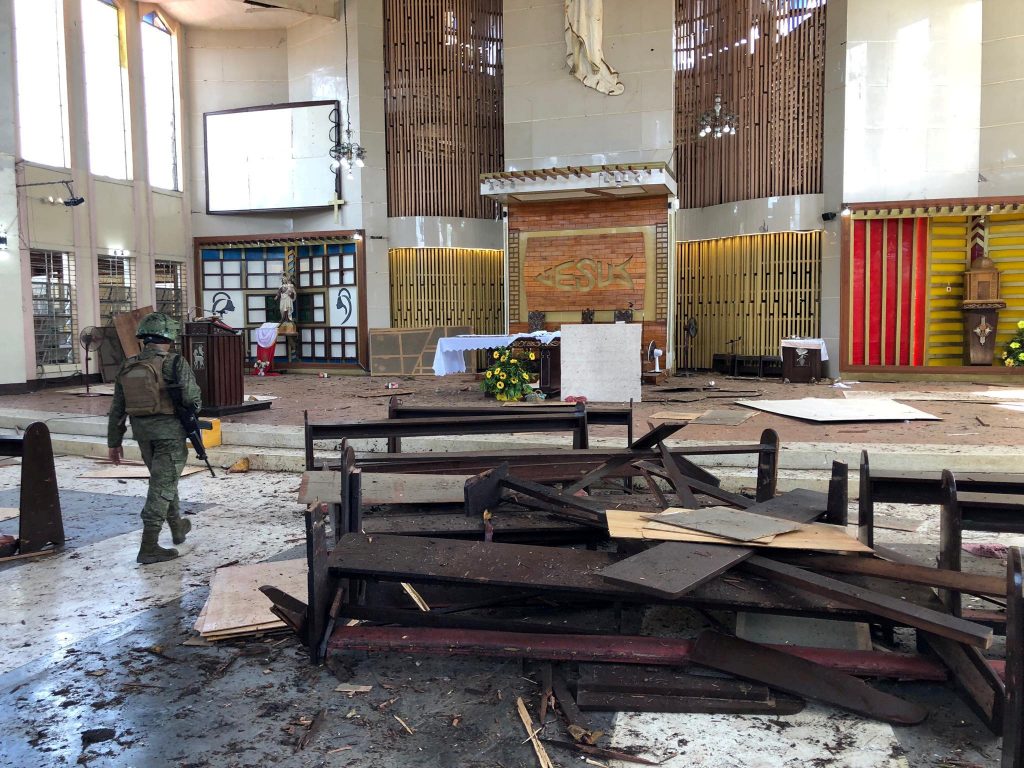 A Philippine army member inspects damage inside the Cathedral of Our Lady of Mount Carmel following a bomb blast in Jolo Jan. 27, 2019. The explosion, just before morning Mass, killed at least 20 people and wounded dozens of others. (CNS photo/Armed Forces of the Philippines via Reuters)