WASHINGTON (CNS) — A change in wording to the concluding doxology of orations in the Roman Missal, from “one God, for ever and ever” to “God, for ever and ever,” took effect on Ash Wednesday, Feb. 17. A Feb. 4 memo to bishops from the U.S. Conference of Catholic Bishops’ Committee on Divine Worship said the Vatican Congregation for Divine Worship and the Sacraments wrote to the English-speaking bishops’ conferences in May to point out the current English translation that concludes “in the unity of the Holy Spirit, one God, for ever and ever” is “incorrect.” “There is no mention of ‘one’ in the Latin, and ‘Deus’ in the Latin text refers to Christ. Therefore, the correct translation … is simply “in the unity of the Holy Spirit, God, for ever and ever,” the memo said, adding that the prefect of the congregation “pointed out the importance of affirming this Christological truth amid the religious pluralism of today’s world.”

VATICAN CITY (CNS) — The Vatican will sanction employees who refuse to get a vaccine, unless they have “proven health reasons” not to, according to a new Vatican decree. A variety of sanctions for anyone violating measures intended to slow the spread of the novel coronavirus were included in a decree signed Feb. 8 and later posted on the Vatican website by the head of the commission governing Vatican City State. While the protocols apply to everyone at the Vatican, the harshest sanctions are reserved for Vatican employees whose contractual obligations include on-the-job health and safety regulations. Because of the current state of emergency, getting the COVID-19 vaccine is part of a series of mandatory health and safety requirements for all employees, unless they have “proven health reasons” to not be inoculated; in legitimate cases, those employees will be given a different job that reduces their risk of spreading or contracting the virus, the decree said. They will receive the same pay. For employees who lack a proven medical reason for forgoing the vaccine, a refusal to be inoculated during the current health emergency exposes them to the same range of potential sanctions that come with refusing any of the other mandatory health exams and safety measures that are part of their terms of employment. The harshest sanction is a termination of employment.

WASHINGTON (CNS) — Democrats formally introduced one of the most ambitious plans to date to address legal and illegal immigration in the U.S., while at the same time signaling limits for those currently attempting to enter without documentation at the southern border. The Biden administration’s U.S. Citizenship Act of 2021, introduced in Congress Feb. 18, seeks to legalize some 11 million unauthorized immigrants currently in the U.S., with a special focus on reunification of families. It would offer immediate permanent resident status to some groups, such as young adults brought into the U.S. illegally as children, farmworkers and those under a program known as Temporary Protected Status, while also providing an eight-year path to citizenship for others. But the proposal says it will focus on legal relief solely for migrants in good standing who entered the country prior to Jan. 1, 2021. The bill includes $4 billion to address the region known as the Northern Triangle and says that “increasing assistance to El Salvador, Guatemala and Honduras,” will depend “on their ability to reduce the endemic corruption, violence and poverty that causes people to flee their home countries.”

Pew report findings will validate faith of some, or cause soul-searching

WASHINGTON (CNS) — When a 176-page report is issued on a subject that hasn’t been addressed comprehensively in more than a generation, it’s tough to compress its findings into a few short paragraphs. The Pew Research Center’s “Faith Among Black Americans” is one such report, released Feb. 16. The center conducted online and mail interviews of 8,660 Black Americans from fall 2019 into the early part of last summer to learn how U.S. Blacks manifest their faith. What it found will validate how some feel about their own faith. In some instances, it may provoke soul-searching. “Millennials and members of Generation Z” — those born after 1996 — are less likely to rely on prayer, less likely to have grown up in Black churches and less likely to say religion is an important part of their lives,” Pew said in the report. “Fewer attend religious services, and those who do attend are less likely to go to a predominantly Black congregation.” But 9% of Generation Z reported being Catholic, a higher percentage than the 6% across all other age groups. Among Black Catholics, 17% said they attend a mostly Black parish, 42% said they worship at a mostly white parish, and 40% said they go to a multiracial church.

For Lent, ask if one’s life is centered on God or oneself, pope says

VATICAN CITY (CNS) — Lent is a time to reconsider the path one is taking in life and to finally answer God’s invitation to return to Him with one’s whole heart, Pope Francis said. “Lent is not just about the little sacrifices we make, but about discerning where our hearts are directed,” he said, “toward God or toward myself?” The pope’s remarks came in his homily at Mass Feb. 17 for Ash Wednesday, which included the blessing and distribution ashes, marking the beginning of Lent for Latin-rite Catholics. Because of ongoing measures in place to reduce the spread of the coronavirus, the Mass and distribution of ashes took place with a congregation of little more than 100 people at the Altar of the Chair in St. Peter’s Basilica. Pope Francis did not do the traditional walk from the Church of St. Anselm to the Basilica of Santa Sabina on Rome’s Aventine Hill to prevent large crowds of people from gathering along the route. In St. Peter’s Basilica, the pope received ashes on his head from Cardinal Angelo Comastri, archpriest of the basilica, and he distributed ashes to about three dozen cardinals, as well as the priests and deacons assisting him at the Mass.

VATICAN CITY (CNS) — As Perseverance, the latest probe on Mars, gears up to send to Earth high-definition images, video and audio of its surroundings, one papal astronomer said he hoped the fresh new discoveries will inspire future explorers. With advanced degrees in physics, philosophy and theology, Jesuit Brother Robert Macke said, “What really inspired me to come into this field was growing up with the results that were coming out of the spacecraft missions, like Voyager, and all the photographs that nobody had ever seen before” of Saturn and its moons and other objects in the solar system. Born in Fort Worth, Texas, in 1974, Brother Macke told Catholic News Service he only “dabbled a little” in enjoying science fiction, influenced by his father’s interest in the genre, and he credits it with inspiring him to think of new ideas. But it was the reality of scientific discoveries that made him say, “Wow, these are real places that you can really explore and photograph and study,” he said Feb. 19 in a call from the Vatican Observatory in Castel Gandolfo near Rome. “Seeing the results and the images that come out of missions like Perseverance, I hope these will be an inspiration to the next generation of young scientists,” he said. 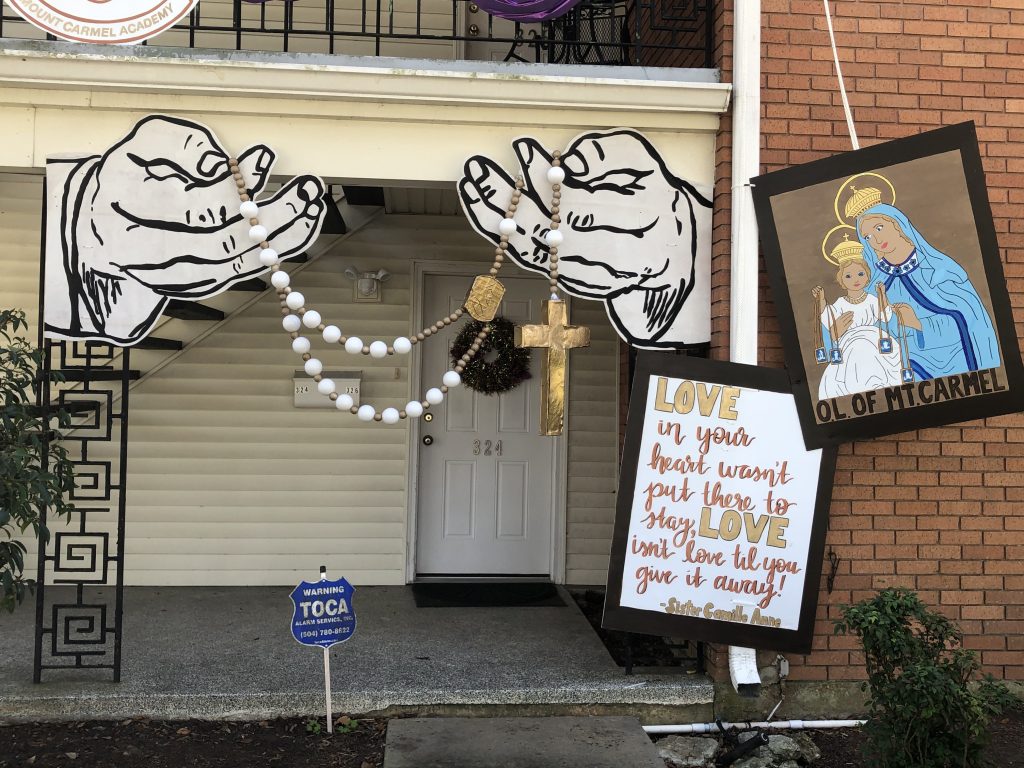 A two-story residence that is home to several Mount Carmel sisters in New Orleans is seen ahead of Mardi Gras, which was Feb. 16, 2021. Mount Carmel Academy art students created Mardi Gras-style imagery with wood, corrugated plastic and outdoor paint for the 7-foot-tall class mascots and other decorations. (CNS photo/Christine Bordelon, Clarion Herald)