WASHINGTON (CNS) — Catholic bishops near the U.S.-Mexico border, joined by other U.S. prelates, voiced opposition just after President Donald Trump’s Feb. 15 declaration of a national emergency so he can order construction of a barrier along parts of the border between the two countries. “In our view, a border wall is first and foremost a symbol of division and animosity between two friendly countries. Furthermore, the wall would be an ineffective use of resources at a time of financial austerity; it would also would destroy parts of the environment, disrupt the livelihoods of ranchers and farmers, weaken cooperation and commerce between border communities, and, at least in one instance, undermine the right to the freedom of worship,” said the statement released just after Trump, in a news conference, said he was going to sign a national emergency declaration to stave off a flow of drugs, human trafficking, gang members and illegal immigration coming across the southern border. The president later sign a spending bill that provides $1.375 billion for fencing and other measures along the border — a fraction of the $5.7 billion he had been asking from Congress for construction of the structure — he announced the national emergency that could grant him up to $8 billion for his project. In a separate bishops’ statement following Trump’s announcement, Cardinal Daniel N. DiNardo of Galveston-Houston, president of the U.S. Conference of Catholic Bishops, and Bishop Joe S. Vasquez of Austin, Texas, chairman of the USCCB Committee on Migration, said they were “deeply concerned about the president’s action to fund the construction of a wall along the U.S.-Mexico border, which circumvents the clear intent of Congress to limit funding of a wall.”

WASHINGTON (CNS) — Since the end of January, the legislatures of New York, Virginia and other states have made headlines by approving or introducing policies that relax abortion restrictions, even in the third trimester and during labor. Now New Mexico is one step closer to passing a similar bill that loosens the state’s already liberal abortion laws and would erase virtually all abortion restrictions in the event that the landmark Supreme Court decision Roe v. Wade is overturned. The “Decriminalize Abortion Bill,” or H.B. 51, has now made its way through the New Mexico House of Representatives, receiving the body’s overall approval in a 40-29 floor vote Feb. 6 after being confirmed by several committees. It is now headed for the Senate, where it will be the subject of further debate and another vote. According to the Santa Fe New Mexican daily newspaper, there are three main parts of New Mexico’s pre-Roe abortion law that would be invalidated by the act: a prohibition that makes abortion a felony; language that permits abortions in some circumstances as determined by a physician, such as rape or threat to a mother’s life; and an opt-out provision for hospitals or providers that register moral or religious objections to performing the procedure. Most of these were invalidated already by Roe v. Wade or the New Mexico Court of Appeals, giving New Mexico some of the laxest abortion policy in the country.

WASHINGTON (CNS) — Catholic Charities USA is partnering with five diocesan Catholic Charities agencies, local hospitals, housing developers and funders in a plan aiming to reduce chronic homelessness 20 percent by 2024. Called the Healthy Housing Initiative, the effort involves placing homeless people into stable housing and providing essential supportive services to reduce hospital readmissions while ensuring that basic needs are met. Collaboration is underway with diocesan Catholic Charities operations in Detroit; St. Louis; Las Vegas; Portland, Oregon; and Spokane, Washington, where such programs exist. “This is basically co-locating the services with the housing. We’re taking a look at not only partnering with Catholic health associations but taking advantage of access to property that most of (Catholic Charities) members have,” said Curtis Johnson, vice president of affordable housing at Catholic Charities USA. In some communities, structures being eyed include vacant buildings on parish land such as schools and convents that can be redeveloped into housing, Johnson told Catholic News Service. In other dioceses, apartments already have been developed in which key social services, mental health counseling and case management are offered.

This year’s Lent could be just what struggling Church needs

WASHINGTON (CNS) — When Lent begins March 6, U.S. Catholics will likely be more than ready for it. This set-aside time for prayer and reflection — after all the Church has been through in recent months — could provide both a healing balm and a needed boost forward, some say. Ash Wednesday, the start of Lent, is typically a big Catholic draw, filling churches with nearly Easter- or Christmas-size Mass crowds even through it is not a holy day of obligation. Conventual Franciscan Father Jude DeAngelo, director of campus ministry at The Catholic University of America in Washington, hopes this year is no exception. “We in the American Catholic Church have been through a year of tremendous suffering and tremendous upheaval and frustration” he told Catholic News Service, referring to the past months of allegations of sexual misconduct and cover-up by Church leaders. The priest said some Catholics stopped going to church, “scandalized by the actions of a few” but that he hopes and prays they come back on Ash Wednesday, a day he described as a strong “reminder that God is never finished with us.” 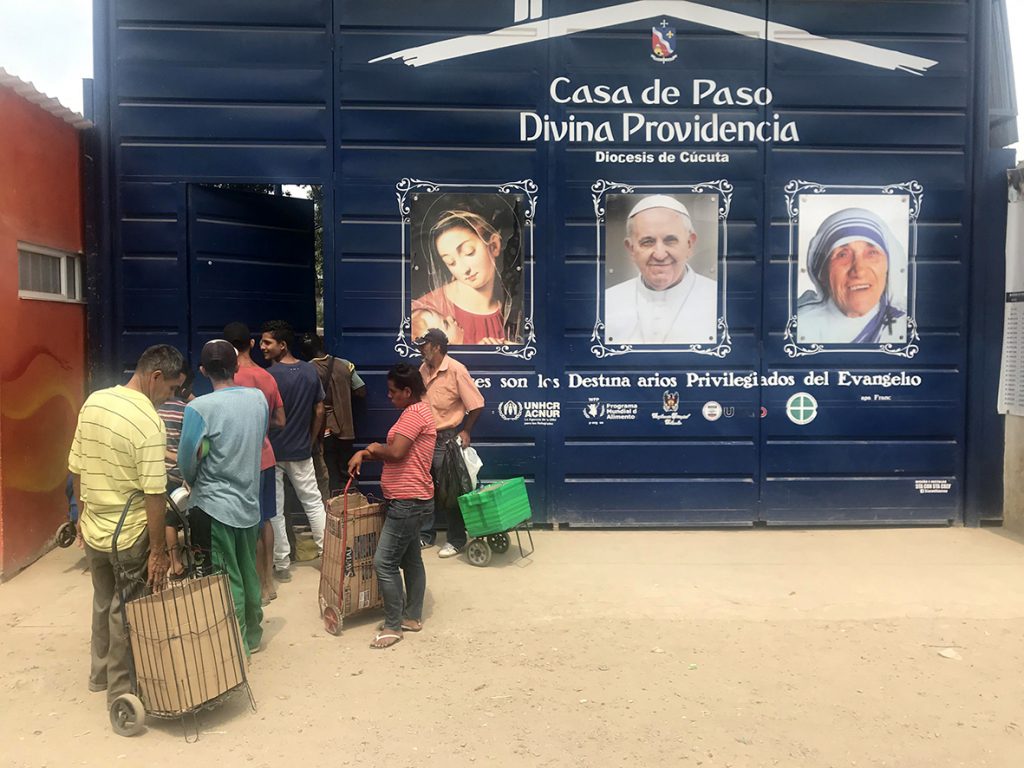 Migrants line up outside the Divine Providence Soup Kitchen in Cucuta Colombia, Feb. 9, 2019. For the past few years, church groups have been calling on Venezuelan President Nicolas Maduro to let humanitarian aid into the country, to relieve the suffering of millions of vulnerable Venezuelans. (CNS photo/Manuel Rueda)