WASHINGTON (CNS) — U.S. Rep. Chris Smith, R-New Jersey, has introduced a bill to prohibit use of federal taxpayer dollars to fund abortions. H.R. 18 — the No Taxpayer Funding for Abortion and Abortion Insurance Full Disclosure Act of 2021 — would make the long-standing Hyde Amendment permanent and keep in place similar provisions to ensure no federal dollars are used to pay for abortion and health plans that include abortion. “When federal taxpayer dollars are not available to help effectuate the demise of unborn babies, lives are saved,” said Smith, a Catholic, who is co-chair of the Congressional Pro-life Caucus. “Abortion violence must be replaced with compassion and empathy for women and for defenseless unborn baby girls and boys.” Smith’s bill, which was introduced Feb. 5 and has over 130 co-sponsors, also would permanently prevent the federal government from funding abortions; codify the Smith Amendment, which prohibits federal employee health care plans from funding abortion; prohibit federal funding of abortion in several other federal programs throughout government agencies; and ensure that the Affordable Care Act conforms with the Hyde Amendment. The Hyde Amendment, first enacted nearly 45 years ago, outlaws federal tax dollars from directly funding abortion except in cases of rape, incest or when the life of the woman would be endangered.

WASHINGTON (CNS) — “When we speak to our elected officials, we speak as missionary disciples, as followers of Jesus Christ,” said Archbishop José H. Gomez of Los Angeles in a Feb. 9 closing message to the Catholic Social Ministry Gathering. “We speak as citizens of faith,” Archbishop Gomez said in his message, delivered online — as was the entirety of the annual meeting for social ministers in the Church. “And as faithful citizens, we are here to call our nation to true justice, to respect the sanctity and dignity of every human life, to never close our hearts or turn our back on people in need,” added the prelate, who is president of the U.S. Conference of Catholic Bishops. Just as the Catholic Social Ministry Gathering was virtual, so too were the Capitol Hill visits. “Thank you for your witness. It is so important what you are doing,” Archbishop Gomez told Catholic Social Ministry Gathering participants.

Survivor of genocide says there is joy, ‘much freedom in forgiveness’

ORLANDO, Fla. (CNS) — Immaculee Ilibagiza found freedom in forgiveness after seeing her family wiped out by genocide in Rwanda in 1994, and she shared her extraordinary journey toward that forgiveness in an evening keynote Feb. 5 during the SEEK21 conference. She was one of two keynote speakers who addressed the theme of forgiveness; the other was Edward Sri, a theologian, author and a founding leader of the Fellowship of Catholic University Students, which sponsored the annual Feb. 4-7 conference, which was held online this year and drew over 26,000 participants from across the globe. Holding her father’s rosary in her left hand, Ilibagiza shared her story of suffering and how she discovered forgiveness of her sins could set her free and forgiving the crimes of others also could lift pain from her heart. “Hold on to God, no matter what is coming. Focus on prayer. Read the Bible and go to Mass,” she told her listeners. “If I can forgive, anyone can forgive. I know the pain and damage of unforgiveness. There is so much joy. So much freedom in forgiveness.”

Catholics in Qaraqosh, Iraq, call it ‘miracle’ that pope will visit

BEIRUT (CNS) — The largest Syriac Catholic congregation in the world is preparing physically and spiritually for Pope Francis’ upcoming visit to Qaraqosh, Iraq. “Words can’t describe how happy we are,” Syriac Catholic Father Roni Momeka told Catholic News Service. “The people feel that it’s a miracle that the pope will come here,” Father Momeka said. “They are happy not only for the visit, but they are happy that Pope Francis is thinking about those people who are in pain, those people who lost everything, but who never lost their faith.” Father Momeka said Qaraqosh is bustling with activity, the streets already awash with papal flags and banners in preparation for the pope’s March 7 visit, part of his March 5-8 visit to Iraq. Parishioners have been busy cleaning and painting the interior of the Church of the Immaculate Conception, transforming the blackened interior to its original radiance for the pope’s visit. The church, built by parishioners in the 1930s, had seating for 2,200 people. It was vandalized, desecrated and burned by the Islamic State. Pope Francis is scheduled to pray the Angelus there.

Court says inmate’s pastor should be with him; Alabama cancels execution

WASHINGTON (CNS) — After the Supreme Court blocked the execution of an Alabama man because it ruled his pastor should be allowed to be with him, the state canceled the execution. In a divided midnight vote Feb. 11, the justices upheld a lower court’s ruling that Willie Smith III’s pastor should be with him in the execution chamber, which the state opposed. The court also vacated a stay of execution from the U.S. Court of Appeals for the 11th Circuit in a separate ruling that said the state failed to provide Smith, who is intellectually disabled, help in reviewing paperwork that would have allowed him to choose an alternate method of execution. The Supreme Court’s action with both decisions would have ultimately allowed the execution to proceed if the state agreed to allow Smith to be accompanied by his pastor, but the state called off the execution, scheduled for Feb. 11, just after the court’s order. Commenting on the court’s ruling on Twitter in early morning hours of Feb. 12, Robert Dunham, executive director of the Death Penalty Information Center, said it remains unclear if the Supreme Court “believes that the Constitution requires a state to allow a prisoner to have his religious adviser minister to him at the time of execution.”

VATICAN CITY (CNS) — The Gospel story of Jesus healing the leper illustrates how nothing will stop God from tenderly and compassionately drawing close to people who want to be healed and saved, Pope Francis said. “Each one of us can experience wounds, failure, suffering, selfishness that make us close ourselves off from God and others,” the pope said. “Sin closes us in on ourselves because of shame, because of humiliation, but God wants to open our heart.” “Jesus announces to us that God is not an idea or an abstract doctrine, but God is the one who ‘contaminates’ Himself with our human woundedness and is not afraid to come into contact with our wounds,” the pope said Feb. 14, commenting on the day’s Gospel reading before praying the Angelus with visitors in St. Peter’s Square. On a brilliantly sunny, but frigid day, Pope Francis asked people in the square to give a round of applause to priests who model God’s closeness, tenderness and compassion in the way they administer the sacrament of reconciliation.

WASHINGTON (CNS) — The coronavirus pandemic has affected virtually every American at some point over the past year, but there are some groups in U.S. society for whom the effects have gone unnoticed, Catholic Social Ministry Gathering participants were told Feb. 8. The comments came during a program hosted by Bread for the World, one of the gathering’s major sponsors. Essential workers, health care workers and deaf Americans have had their lives altered by the virus, as a panel of speakers asserted. Essential workers are “still going to work every day” and “haven’t missed a day at work,” said Kimberly Mazyck, relationship manager for national partnerships at Catholic Relief Services, the U.S. bishops’ international relief and development agency. “While we’re working from home, for them it’s not possible,” she said. “Many of us still eating the way we ate before,” but for essential workers, “they may not have those nutrients on their own tables,” Mazyck added, noting a pantry worker was slated to be part of the panel, “but she couldn’t be here today because she had to work.” 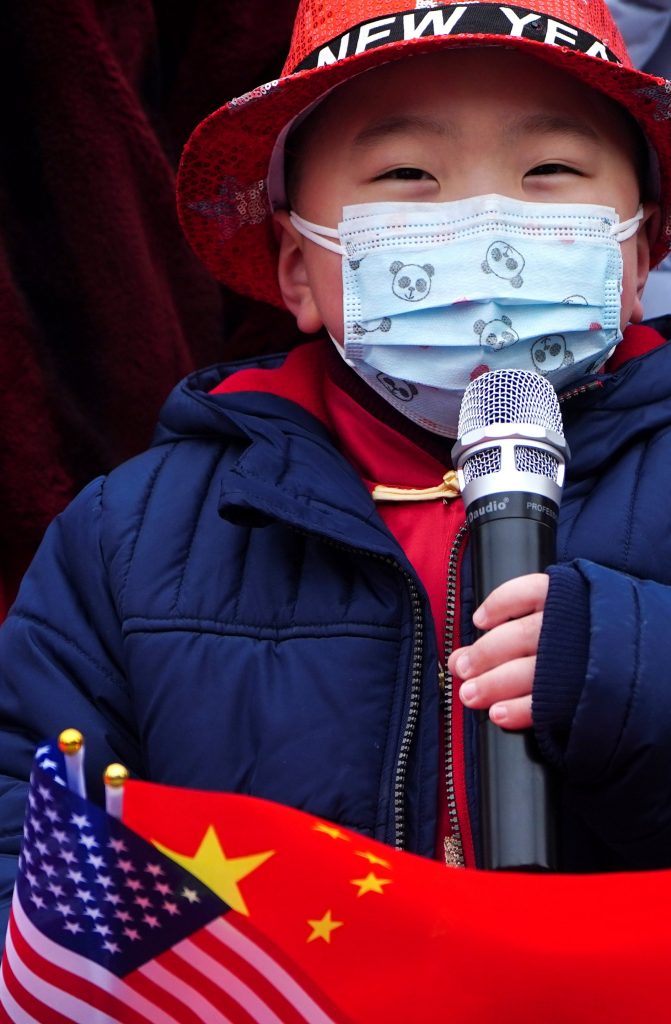 A boy in the Chinatown area of New York City uses a microphone as he takes part in the 22nd New York City Lunar New Year celebration Feb. 12, 2021, amid the coronavirus pandemic. (CNS photo/Carlo Allegri, Reuters)