Women religious organization issues statement on abuse of sisters
WASHINGTON (CNS) — Days after the pope acknowledged abuse of nuns and sisters by priests and bishops, the largest U.S. organization of women religious thanked the pontiff for shedding “light on a reality that has been largely hidden from the public,” but the group also called for measures to address the issue. “We hope that Pope Francis’ acknowledgement is a motivating force for all of us in the Catholic Church to rectify the issue of sexual abuse by clergy thoroughly and swiftly,” said the Leadership Conference of Women Religious in a Feb. 7 statement. It acknowledged that “the sexual harassment and rape of Catholic sisters by priests and bishops has been discussed in meetings of leaders of orders of Catholic sisters from around the world for almost 20 years.” But while the abuse had been discussed, the group said, the information hadn’t always been acted on. LCWR, an association of the leaders of congregations of Catholic women religious in U.S., has about 1,350 members and represents about 80 percent of women religious in the United States. “We acknowledge that, as sisters, we did not always provide environments that encouraged our members to come forward and report their experiences to proper authorities,” the statement said. “We regret that when we did know of instances of abuse, we did not speak out more forcefully for an end to the culture of secrecy and cover-ups within the Catholic Church that have discouraged victims from coming forward.

Trump defends rights of faith-based adoption agencies at prayer breakfast
WASHINGTON (CNS) — Touting efforts to protect religious freedom, President Donald Trump told the National Prayer Breakfast that his administration would defend the right of faith-based adoption agencies to place children in families based on firmly held religious beliefs. “We will always protect our country’s proud tradition of faith-based adoption,” Trump said. “My administration is working to ensure that faith-based adoption agencies are able to help vulnerable children find their forever families while following their deeply held beliefs.” His comments came after introducing Melissa and Chad Buck, a Catholic couple from Holt, Michigan, who have adopted five children with special needs through St. Vincent Catholic Charities in the Diocese of Lansing. Two of the Holts’ children — Max, 10, and Liz, 9 — joined the couple at the Feb. 7 breakfast. Trump alluded to an American Civil Liberties Union federal lawsuit against the Michigan Department of Health and Human Services that challenges a state law that protects child-placing agencies that deny adoption services because of a conflict with the agency’s religious beliefs. The lawsuit argues that state-contracted, taxpayer-funded child placement agencies unconstitutionally discriminate by disqualifying same-sex couples from consideration for adoption or foster care.

Supreme Court blocks Louisiana law that would restrict abortion providers
WASHINGTON (CNS) — The U.S. Supreme Court blocked a Louisiana law requiring abortion providers to have admitting privileges at nearby hospitals Feb. 7. In the court’s 5-4 vote, Chief Justice John Roberts sided with four justices in favor of blocking this regulation for now. Since the decision was a brief order, it did not contain an explanation. The court is likely to hear a challenge to the law’s constitutionality during its next term. Justices Clarence Thomas, Samuel Alito, Neil Gorsuch and Brett Kavanaugh sided with the state law, but Kavanaugh also wrote a dissent from the order, noting he would have preferred more information on the specific impact of the state’s restrictions. In his four-page dissent, he wrote that the main issue is if the admitting-privileges requirement puts an “undue burden” on a woman’s ability to have an abortion. Kavanaugh said the state’s doctors and hospitals should first aim to resolve the admitting-privileges question and if they can’t, the case should return to court. If they do resolve this issue and the doctors continue to perform abortions, he said the law would not impose an undue burden. In reaction, Archbishop Joseph F. Naumann of Kansas City, Kansas, who is chairman of the U.S. bishops’ pro-life committee, said: “The abortion industry’s objection to such a reasonable law, and this court’s decision to temporarily prevent it from going into effect, is further evidence of how abortion extremism actively works against the welfare of women.”

Vatican commemorates 90th anniversary of Lateran Pacts
VATICAN CITY (CNS) — The historic signing of the Lateran Pacts between the Holy See and Italy 90 years ago is an important example of cooperation and peace that is needed in today’s world, a Vatican official said. Norbertine Father Bernard Ardura, president of the Pontifical Committee for Historical Sciences, told journalists Feb. 8 that the Lateran Pacts, which ended decades of tension between Italy and the Holy See, shows that reconciliation between former foes is an achievable goal. Ninety years later, he said, “the effective cooperation between the Holy See and the Italian state that still exists today, especially in these years of economic and social precariousness and more recently of humanitarian crisis, demonstrates the goodness of the Lateran Pacts.” Signed in 1929, the Lateran Pacts settled what was known as the “Roman question,” a dispute that lasted nearly 60 years after Italy’s seizure of the Papal States.

Vermont bishop says abortion bill ‘goes too far’ by allowing infanticide
BURLINGTON, Vt. (CNS) — The bishop of the Diocese of Burlington said an abortion bill working its way through the Vermont Legislature “goes too far.” Bishop Christopher J. Coyne said the proposal, H. 57, “goes far beyond Roe v. Wade,” the U.S. Supreme Court decision legalizing abortion, by “guaranteeing unrestricted abortion through all nine months of pregnancy.” This, he added, “means that a baby in the womb can be terminated right up to the moment of natural birth. My friends, that is not abortion. That is infanticide.” The House Human Services Committee passed the bill out of its committee Feb. 7 after only making what Vermont Right to Life called “cosmetic changes.” It now moves to the House Judiciary Committee. The bill’s sponsors say it isn’t intended to change or pre-empt abortion law but simply “codify current access.” Bishop Coyne said the Catholic faith teaches that all human life is sacred, “meaning ‘of God'” — from the moment of conception to the moment of natural death and that Catholics are called to embrace and protect that sacred gift. 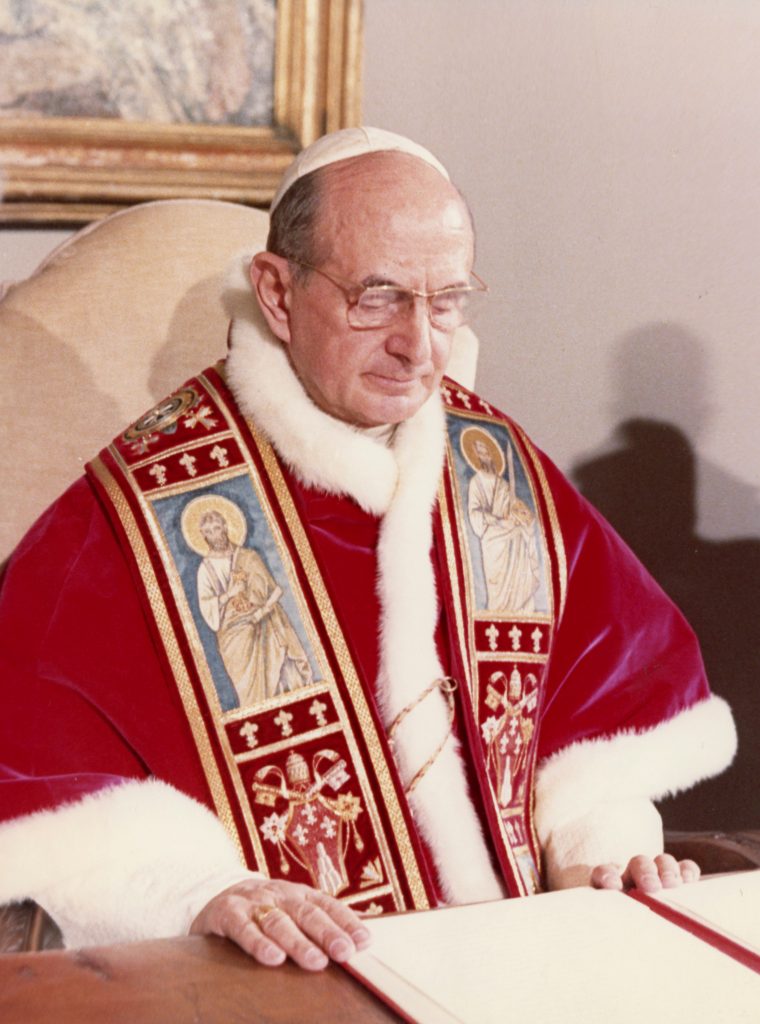 Pope Paul VI is pictured in a June 29, 1968, photo at the Vatican. Documents in the Vatican Secret Archives and the archives of the Congregation for the Doctrine of the Faith prove it was a “myth” that now Blessed Paul VI largely set out on his own in writing “Humanae Vitae,” the 1968 encyclical on married love and the regulation of births. —CNS file