Inviting neighbors to say rosary together leads to community of prayer

OVERLAND PARK, Kan. (CNS) — It was an invitation Erin Joerger never expected to receive from a neighbor: “We’re going to watch the Super Bowl and pray the rosary before. Come over.” “I kind of thought they were joking,” she said. “I’ve never been invited to someone’s house to pray a rosary.” But Jennie and Kevin Punswick, members of Holy Spirit Parish in Overland Park, were completely serious. Around two years ago, the Punswicks felt moved to ask Erin, her husband, Tom, and their children to pray the rosary with them in their home. The Joergers had recently moved into the neighborhood and were pleasantly surprised by the invitation. “Being new to the neighborhood, it was nice to have that faith component in common,” Erin told The Leaven, newspaper of the Archdiocese of Kansas City. Since then, the Punswicks have continued reaching out to their neighbors to invite them to pray the rosary on Sunday evenings — and often to stay after for a drink and conversation. “At one point this summer, there were 39 people in our living room,” said Jennie. Because so many families participate, couples on other streets in the neighborhood have begun leading their own rosary groups. Two factors, explained the Punswicks, have helped make it so successful: intentionality and accessibility.

MORELIA, Mexico (CNS) — At least 138 Salvadorans have been murdered after being sent back to their violent Central American country from the United States, according to a report from Human Rights Watch. The report, released Feb. 5, also documented “more than 70 others, who were beaten, sexually assaulted, extorted or assaulted” by perpetrators ranging from gangsters to intimate partners to police and security personnel. None of the findings surprised Catholic officials in the country, long a source of migrants because of civil war and later gang-driven violence and poverty. Church workers say deportees return to the same dangerous situations that forced them to flee in the first place. “We know this is very real, and I knew of cases,” said Rick Jones, adviser on migration for Catholic Relief Services in El Salvador. “It is sending a lot of people back into harm’s way,” he said of deportations to El Salvador. “We still have a homicide rate of 32 for every 100,000. … So people are still at risk.”

ST. PAUL, Minn. (CNS) — Father Dan Griffith has held the stone. He has felt the emotional weight and lifting of that weight in a healing circle where people are invited to take turns holding a stone or other “talking piece” and tell their story as others respectfully listen. “It’s humbling and you’re vulnerable,” Father Griffith said of sharing in a healing circle his story of secondary trauma from the Church’s clergy sexual abuse crisis. The priest is quick to point out that his secondary trauma cannot be compared with the deep and long-standing harm done to those directly traumatized by a priest. It is vitally important to have the Church acknowledge the harm done, foster accountability and offer roads to healing, he said. In an official capacity with the Archdiocese of St. Paul and Minneapolis, he is helping to spread the concept of healing circles and restorative justice both in the archdiocese and beyond in hopes others impacted by the crisis — particularly those directly harmed by sexual abuse in the Church — can begin to heal. Father Griffith’s story includes being a safe environment delegate in the archdiocese in 2013 and 2014 and reading files about priests accused of sexual abuse. The stress and the deep sadness he felt one evening came back when he talked about it in a healing circle. But sharing helped ease the weight, and even while a delegate, in the midst of that pain, Father Griffith was blessed with Christ’s healing light.

WASHINGTON (CNS) — As the world recognizes the 75th anniversary of the liberation of the Nazis’ infamous Auschwitz concentration camp, the vows of “never again” after the Holocaust’s horrors became known threaten to be swallowed up by religious persecution against Christians, Muslims and other groups, said panelists at a Feb. 5 forum at the U.S. Holocaust Memorial Museum. “The unthinkable is possible, and everyone must act,” said Naomi Kikoler, director of the museum’s Simon-Skjodt Center for the Prevention of Genocide and panel moderator. Omer Kanat, chairman of the World Uyghur Congress’ executive committee, said the crisis for Uighur Muslims began in 2017 as China’s crackdown on the minority ethnic group intensified, calling the “eradication of Uighur culture” an “extermination.” There are 1.8 million to 3 million Uighurs in “concentration camps,” Kanat said. “The statements of government officials are going in this direction: ‘We cannot sustain the weeds among the crops. We have to spray a chemical, and kill all of them.’” He added not only are Uighurs within China traumatized by the ongoing repression, but Uighurs living outside China are despondent over “their inability to help their family back home.” Bob Fu, president of China Aid, a Texas-based aid organization for Chinese Christians, blasted the nation’s leader as “Emperor Xi Jinping,” and called the government’s campaign against Christians “a comprehensive, systematic and state-engineered war.”

CAMAGUEY, Cuba (CNS) — In his first stop of a six-day visit to Cuba, Cardinal Timothy M. Dolan walked in without fanfare Feb. 8 into the Shrine of Our Lady of Charity in the town of El Cobre, likely the most popular sacred space in Cuba, joining the hundreds of citizens and tourists of this island nation who crowd in to visit a statue of the Madonna, some hoping for a miracle through her intercession. If he had a wish in his heart, New York’s archbishop didn’t say it aloud as he got his first glance at her, walking in as any other pilgrim toward the statue inside the shrine. Some stopped to ask if they could take a photo with him or of him with their children. Bishop Dionisio Garcia Ibanez of Santiago, the city closest to the shrine, had told him earlier to walk in “discreetly,” though smiling and saying, “If that’s possible,” because in a cassock and his tall frame, Cardinal Dolan towered above everyone, except the figure of the tiny Madonna perched high above the altar. In his role as a high-ranking U.S. Church leader visiting during a time of tense political waters in his country toward Cuba, he offered during the homily the only things he could to other Catholics and visitors gathered for Mass there that day: his presence, his gratitude, solidarity as a Christian and trust that God, along with Jesus and Mary, is with them. 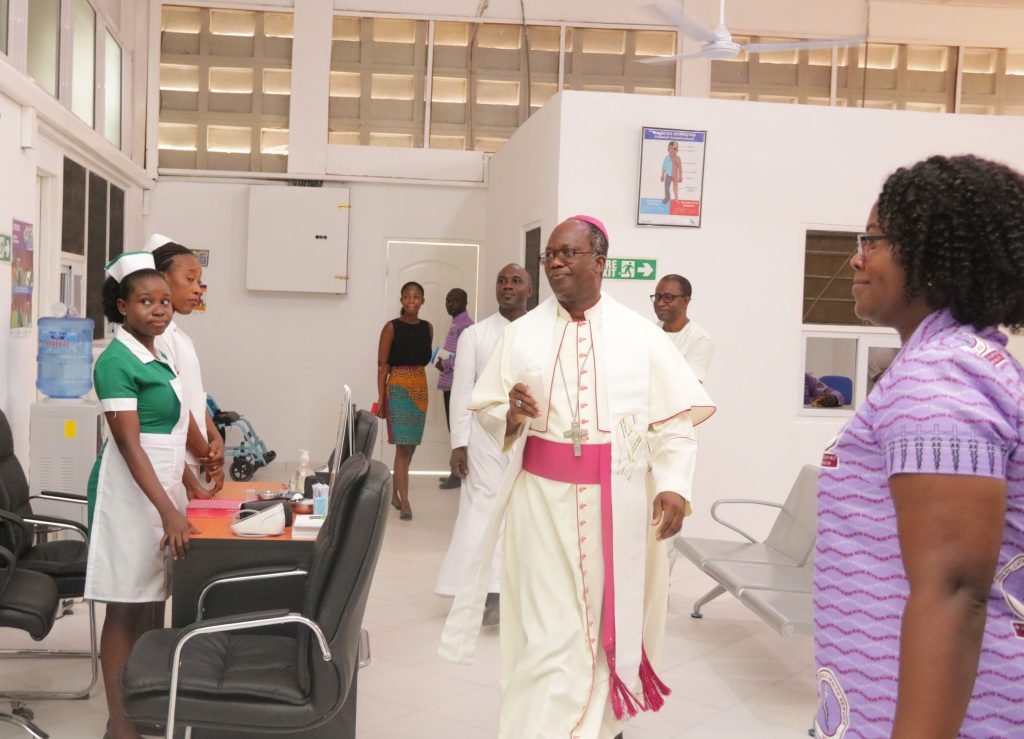 Bishop Emmanuel Kofi Fianu of Ho, who is in charge of health issues for the Ghana Catholic Bishops’ Conference, blesses the St. Pauline Clinic with holy water after commissioning it in Accra Feb. 7, 2020. The clinic was built by Novo Nordisk, a Danish global health care company and world leader in diabetes care, in partnership with the National Catholic Health Service. (CNS photo/Damian Avevor)