NEW YORK (CNS) — New York Cardinal Timothy M. Dolan in a Sirius XM broadcast Jan. 29 criticized Gov. Andrew Cuomo for his “stinging criticism of the Catholic Church” in singling out Catholics over the crisis surrounding the sexual abuse of minors. He really caricatured the Church and only the Church, singling it out for the sexual abuse of minors and contesting that we were the ones that had blocked the Child Victims Act,” Cardinal Dolan told Father Dave Dwyer, co-host of “Conversation With Cardinal Dolan,” which airs every Tuesday afternoon on Sirius XM’s The Catholic Channel. “And then misquoting, taking out of context, Pope Francis, and to flaunt his dissent from established Church teaching and to use all that as an applause line,” the cardinal said of the governor. He was referring to Cuomo’s State of the State address in which he cited his own Catholic faith and Pope Francis and at the same time emphasized his full backing of a bill — now signed in to law — to radically expand abortion access in the state. Cuomo also criticized the state’s Catholic bishops for their earlier opposition to the Child Victims Act, also now a law. The new law makes it easier for abuse victim-survivors to sue. The bishops did support the final measure because it included both private and public institutions. Earlier versions only targeted the Church. Cuomo also criticized the Catholic bishops in a news conference and radio interview Jan. 28 claiming that despite the teachings of Christ about “truth and justice,” the bishops resisted justice for victims and had worked to event to protect the Church over doing justice.”

WASHINGTON (CNS) — When you head to Mass this Sunday, chances are you will hear the intention “an increase in vocations to the religious life” lifted up before the gifts are presented. A recent survey suggests those prayers might be getting answered. The Center for Applied Research in the Apostolate at Georgetown University, a nonprofit that conducts and publishes social-science research on the Catholic Church, just released findings of a national survey of men and women who in 2018 professed perpetual vows in monasteries, provinces or religious congregations based in the United States, and the results suggest an increasing number of Catholics are willing to pursue this kind of obligation. Senior research associate Mary Gautier told CNS in a phone interview that CARA “(was) able to identify 240 persons” taking perpetual vows, “up from 200 the last time we did the survey.” According to a news release, CARA reached respondents by contacting major superiors — leaders of religious institutes — belonging to the Leadership Conference of Women Religious, the Council of Major Superiors of Women Religious or the Conference of Major Superiors of Men. The full report can be found on the U.S. Conference of Catholic Bishops’ website at https://bit.ly/2UxdFPJ.

Steinfels: No one did thorough review of grand jury report

WASHINGTON (CNS) — Upon hearing in August of the findings of a Pennsylvania grand jury about how Catholic clergy abused children and young people, veteran journalist Peter Steinfels was shocked and appalled. The former New York Times religion reporter and former editor of Commonweal magazine had little disagreement with most of the documentation on the abuse allegations, although he wondered what prompted the grand jury to conclude that six of Pennsylvania’s eight Catholic dioceses acted “in virtual lockstep” to cover up abuse allegations and dismiss alleged victims over the course of seven decades. He also was troubled by what he found to be incomplete work by journalists who covered the report’s release. Steinfels investigated and concluded that the grand jury report largely overlooked Church documents and “misrepresented” that “the church was dismissing the needs of victims suffering the abuse and the long-lasting effects of that.” He detailed his concerns in a 12,000-word essay posted Jan. 14 on the Commonweal website and appearing in the magazine’s Jan. 25 print edition. There were times, Steinfels discovered, when the Church did not respond in a compassionate manner to abuse victims’ claims. But for the grand jurors to say there was a blanket policy to dismiss the victims in order to protect the reputation of clergy and the Church is inaccurate, he said. Of note was that the report did not place into context that Church authorities had received a third or more of the alleged crimes documented in the report just since 2002, the year the U.S. bishops adopted the “Charter for the Protection of Children and Young People.” The charter mandates automatic removal from ministry when a priest or other Church worker is accused of abuse. He also said the grand jury report did not mention how the count of 301 alleged abusers — mostly priests but also other Church workers — contrasted with the total number of priests in ministry in the six dioceses over the 70 years examined.

WARSAW, Poland (CNS) — Polish prosecutors have charged three former communist secret police agents with attempting to frame Blessed Jerzy Popieluszko before they abducted and murdered him. The three were among four men convicted of Blessed Popieluszko’s murder; all four were released early after controversial sentence revisions. Marcin Golebiewicz, an official with the Commission for Investigating Crimes against the Polish Nation, said the agents faced up to three years’ jail if convicted of creating false evidence under penal and criminal code provisions against “communist crimes and crimes against humanity.” His statement, published Jan. 28 by Poland’s official National Remembrance Institute, said the agents illegally entered Father Popieluszko’s apartment and left “ammunition, explosives, leaflets and publications. This behavior constituted, at the time of its execution, an act of repression and persecution against a priest for political and religious motives,” the statement said.

Gift of fidelity in marriage, priesthood is possible, pope says

VATICAN CITY (CNS) — Unity and fidelity are indispensable cornerstones of Christian marriage, Pope Francis said. Having two people generously come together as one and pledge lifelong faithful love must be not only “adequately explained to future newlyweds,” these values also require the pastoral care of the Church’s ministers and members, the pope said, addressing members of the Roman Rota, a tribunal handling mostly marriage cases. In fact, married couples who live their marriage “in generous unity and with faithful love” are “a precious pastoral help to the Church” and offer everyone “an example of true love,” he said Jan. 29 in an audience marking the inauguration of the Vatican court’s judicial year. These important role models teach in silence, he said, and unfortunately, “don’t make headlines while scandals, separations and divorce make the news.” Today’s increasingly secularized world, he said, “does not favor the growth of faith, resulting in the Catholic faithful struggling to give witness to a lifestyle according to the Gospel, including with regards to the sacrament of marriage.”

DENVER (CNS) — Colorado lawmakers are considering a bill to require all public schools and charter schools “to either use a comprehensive sex-ed curriculum that contradicts human nature and is inconsistent with Christian values, or to provide no instruction on sexuality at all,” Denver’s archbishop said in a letter read at all Masses Jan. 27. Legislators held a hearing Jan. 30 on the Comprehensive Human Sexuality Education bill, or H.B.19-1032. Its main sponsors are Democratic Rep. Susan Lontine, Democratic Sen. Nancy Todd and Republican Sen. Don Coram. “We know that God made us male and female, in his image and likeness, but the comprehensive curriculum route which most schools will likely adopt teaches innocent children this is not true,” Denver Archbishop Samuel J. Aquila said. “Specifically, public schools would have to promote abortion as an equal option to life, and parents wouldn’t be notified before lessons were presented on gender-identity and sexual orientation,” he added. “Each of us must do our part to fight this legislation.” In the letter, released the first day of Catholic Schools Week in the U.S. Church, the archbishop said the “work of Catholic schools cooperating with parents in forming the minds, hearts and souls of our children plays a key role in the future of our church and society.”

TORONTO (CNS) — Asia Bibi, the Catholic woman who spent eight years on death row in Pakistan, will be welcomed to a small town in Canada, where she will be reunited with her two teenage daughters, along with the family who aided and protected her daughters in Lahore while the mother sat in jail through years of legal appeals. The location of Bibi’s daughters and their family friends must remain secret for now, a Canadian bishop who has worked on bringing Bibi to Canada told The Catholic Register, Canadian Catholic weekly. “It’s real life and death stuff,” said the bishop. “There is a possibility that a militant Islamic group could come after her here.” On Jan. 29, the Supreme Court of Pakistan rejected a final attempt to have Asia Bibi retried on blasphemy charges that stem from a 2009 argument between Bibi and fellow farm workers, who accused her of drinking from the same cup as her Muslim co-workers. Under Pakistani law, insulting the prophet Muhammad is a capital offense. With news of the Pakistani court’s decision, Prime Minister Justin Trudeau revealed Canada has offered asylum to Bibi and her husband, Ashiq Masih, and that the offer has been accepted.

Pro-lifers urged to be aggressive, fight abortion on ‘many fronts’

WASHINGTON (CNS) — Abortion has been prominent in the news cycle for most of January as many state legislatures scrambled to get various measures passed near the anniversary of the landmark Roe v. Wade decision, and controversy still swirled about an incident between young March for Life attendees and marchers at another demonstration in Washington. Lawyer Thomas Brejcha, president and chief counsel for the pro-life Thomas More Society, gave a telephone interview to Catholic News Service Jan. 25 to discuss the current legal landscape surrounding abortion, how current court and legislative battles fit into that landscape, and his hopes for the pro-life movement going forward. “We have to be as aggressive as possible on as many fronts as possible,” Brejcha said, noting how legal precedent indicates the abortion issue has been “anything but settled” since Roe v. Wade, which was decided in 1973. In the past year, Brejcha noted, the pro-life movement lost some key battles but scored a significant victory with the nomination of Brett Kavanaugh to the Supreme Court. Kavanaugh, a former D.C. Circuit judge, who was nominated to the bench by President Donald Trump in May 2018, proved to be a polarizing figure as the interests of both pro-lifers and of supporters of legal abortion recognized he would provide a “swing vote” that could overturn standing abortion precedent.

Brejcha said he “doesn’t worry” about Kavanaugh’s refusal alongside his liberal peers to hear a case in 2018 that would have called into question Planned Parenthood’s inclusion on state Medicaid plans. 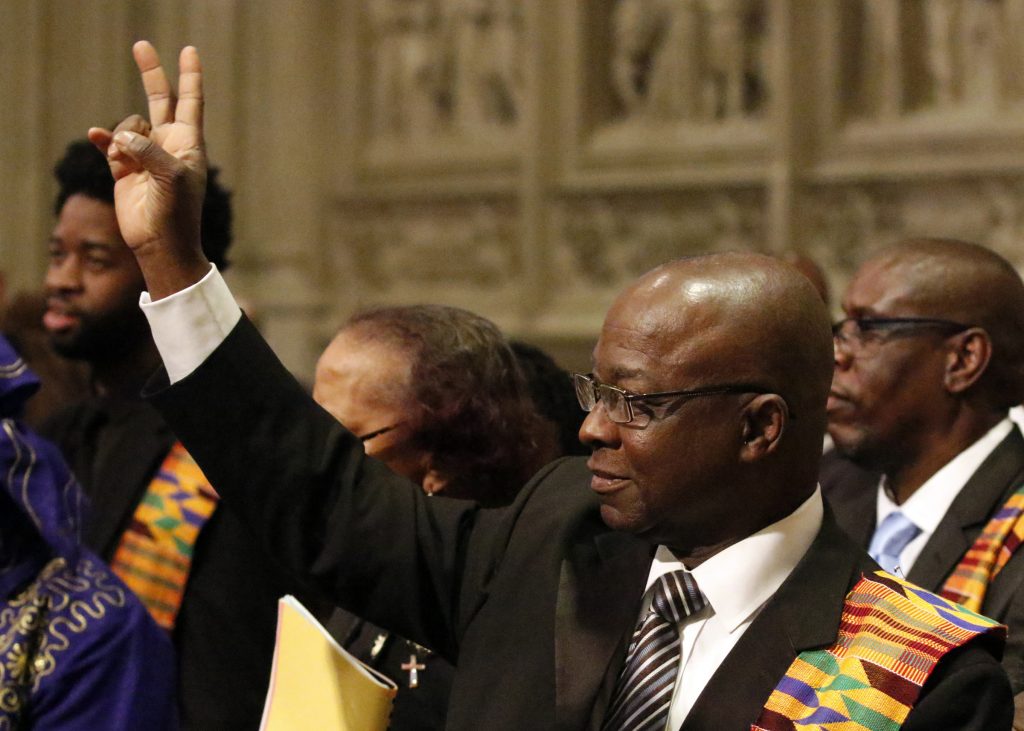 A man flashes the peace sign during an annual Mass celebrated for Black History Month Feb. 3, 2019, at St. Patrick’s Cathedral in New York City. The liturgy, sponsored by the Archdiocese of New York’s Office of Black Ministry, was celebrated in observance of the National Day of Prayer for the African American and African Family. (CNS photo/Gregory A. Shemitz)