ROME (CNS) — After special study, the German bishops’ conference decided to stick with the traditional wording in the Lord’s Prayer, while the Italian bishops’ conference has decided to change the words of the prayer in their translation of the Roman Missal. The decisions come after the French bishops decided that beginning early December last year, French Catholics would change the line, “Lead us not into temptation,” to the equivalent of “do not let us enter into temptation.” French-speaking Catholics in Benin and Belgium began using the new translation at Pentecost last June. The common Spanish translation already is “no nos dejes caer en la tentacion” or “do not let us fall into temptation.” The issue got wide attention after Pope Francis discussed the line, “And lead us not into temptation,” with Father Marco Pozza, a Catholic prison chaplain, Dec. 6, as part of a television series on the Lord’s Prayer.

VATICAN CITY (CNS) — A relationship with Mary, the mother of God, is not “optional” for Christians, Pope Francis said, because Jesus points to her as a source of protection and guidance. Wherever people have opened their doors to Mary, “the devil doesn’t come in; wherever the Mother Mary is, turmoil will not prevail, fear will not win. Who among us doesn’t need this? Who among us is not sometimes in distress or worried?” he asked in a morning homily Jan. 28. The pope celebrated Mass at the Basilica of St. Mary Major on the feast of the formal installation of the basilica’s Marian icon, “Salus Populi Romani” (health of the Roman people). The icon had been extensively restored in time for the day’s celebration. Pope Francis is particularly devoted to the icon, which has had a place in the hearts of Rome citizens since the 16th century when their prayers to be saved from the plague seemed to be answered after the image was carried through the city streets in a procession.

Ahead of Super Bowl, Catholics partner to ramp up anti-trafficking efforts

ST. PAUL, Minn. (CNS) — For Terry Forliti, a series of traumatic events as a teenager — being raped by her boss, her friend dying in a car accident and her parents divorcing — spurred heavy drug use that carried into adulthood. But Forliti was able to function — up until her own divorce, being laid off from her job with a health care company and losing her home. An admitted alcoholic, she also lost custody of her two children. She saw her support system crumble, along with her self-worth. And when she sought treatment, her takeaway wasn’t recovery, but rather learning where to get more drugs. People who profit from selling others for sex are trained to spot and aggravate their victims’ vulnerabilities. Ultimately, one perpetrator spotted Forliti’s. Thus began her life on the street at age 38, segueing into becoming a victim of sex trafficking. “This didn’t just fall on my lap, and it doesn’t just fall on anyone’s lap,” said Forliti, 56. She is now executive director of Breaking Free, a survivor-led organization in the Twin Cities dedicated to helping victims of sex trafficking and other violent crimes. Her group and others are raising awareness of trafficking and offering help to victims during the days surrounding the Super Bowl Feb. 4 in Minneapolis.

SAN FRANCISCO (CNS) — Smiling and singing “Amazing Grace” and the “Battle Hymn of the Republic,” hundreds of high school and college students led tens of thousands of pro-life supporters along San Francisco’s Market Street in the 14th Annual Walk for Life West Coast. The event, which begins each year with a rally in the Civic Center, is followed by the walk from City Hall to the wharf behind a street-wide banner that proclaims, “Abortion Hurts Women.” This year the Walk for Life was held Jan. 27, one week after more than 50,000 pink-clad participants in the Women’s March converged on the city’s downtown streets. Eva Muntean, the pro-life event’s co-chair, wore a pink shirt, for the Walk for Life, saying she was “taking back pink,” which supporters of legal abortion have made their signature color. “We are here to take back the narrative that abortion is a right,” Muntean told the crowd from the stage in front of City Hall. For many, the day began with a packed Mass at St. Mary’s Cathedral, where San Francisco Archbishop Salvatore J. Cordileone began his homily by noting that the U.S. Congress has been debating the Born-Alive Abortion Survivors Protection Act. The U.S. House Jan. 19 passed the measure, which prohibits a health care practitioner from allowing the death of a baby born alive during an abortion or an attempted abortion.

NOTRE DAME Ind. (CNS) — Some University of Notre Dame students, faculty and alumni are voicing strong public criticism over the university administration’s decision to continue employee insurance coverage for sterilizations, contraceptives and abortifacients after a federal mandate to do so was amended late last year. An Oct. 27 university email to university employees stated that the previously mandated coverage would end Dec. 31. A small campus protest ensued and The American Civil Liberties Union of Notre Dame and the Notre Dame Women’s Legal Forum executive board also objected — and the university reversed course. However, a Nov. 29 letter to the university’s president, Holy Cross Father John Jenkins, from the executive board of the Notre Dame Chapter of University Faculty for Life, was published in the “Viewpoint” section of the Jan. 18 issue of the university’s newspaper. “With the March for Life approaching,” it said, “we, the executive board of the Notre Dame Chapter of University Faculty for Life, want to make clear that there are many Notre Dame faculty, staff and students who oppose these policies that facilitate the destruction of human life, and who are committed to the holistic teachings of the church on the sanctity of all human life.” It also stated that “university communications have left much unsaid and caused manifest confusion.”

Advocates alarmed at U.S. suspension of aid to Palestinian refugees

JERUSALEM (CNS) — The U.S. suspension of $65 million in aid to the U.N. agency that deals with Palestinian refugees alarmed advocates who work with Palestinians living in camps. Hilary DuBose, country representative to the Palestinian territories for the U.S. bishops’ Catholic Relief Services, said her agency is “deeply concerned about the impact such a dramatic cut in aid will have.” The agency, UNRWA, “is one of the major providers of critical, basic life-sustaining support services — including food assistance, education, health care, sanitation management — in the refugee camps. These needs exist.” Bishop Oscar Cantu of Las Cruces, New Mexico, chairman of the U.S. Conference of Catholic Bishops’ Committee on International Justice and Peace, said cutting the aid to refugee assistance would be inhumane. “We have visited the refugee camps in Gaza and, even with the assistance they receive, they live very meager and undignified lives,” said Bishop Cantu, who was participating in the Hispanic Bishops’ Pilgrimage for Peace in the Holy Land. “The separation wall has already devastated their economy. Able-bodied Palestinians who would want to work and are trying to work can’t find sufficient work to support their families. It would be absolutely inhumane to cut the aid.”

INDIANAPOLIS (CNS) — When Shawn Gillen reflected on her participation in the inaugural Indiana March for Life, she had only one regret. “I wish I’d brought my kids,” said the member of St. Lawrence Parish in Lafayette, which is in the Diocese of Lafayette-in-Indiana. “This was an historical, monumental event. We’ll look back on this and say, ‘I was there.’” Gillen was one of approximately 500 participants in the first Indiana March for Life in Indianapolis Jan. 22 — the day when, 45 years ago, the Roe v. Wade and Doe v. Bolton decisions by the U.S. Supreme Court legalized abortion across the country. The event was the culmination of efforts by the Archdiocese of Indianapolis, the Diocese of Lafayette and Right to Life of Indianapolis. Their goal was to support and raise awareness of the pro-life cause, and to promote pro-life action and legislation at the state level. And what better place to accomplish such a goal than to march up Capitol Avenue in Indianapolis and hold a rally outside the Indiana Statehouse, where the state’s General Assembly is currently in session. “For 45 years, legal abortion has been the law of the land,” said Right to Life of Indianapolis president Marc Tuttle from the Statehouse steps. He was the first of several speakers to address the crowd at the post-march rally. “It’s time that we do something about this as citizens, and it’s time that we do something about this as legislators.”

Update: Bishops name three young adults as delegates to pre-synod meeting
WASHINGTON (CNS) — A religious brother, a campus ministry director and a youth minister who is a wife and new mother have been named to represent the United States as young adult delegates at a pre-synod gathering in Rome in March. The U.S. Conference of Catholic Bishops announced Jan. 25 that the delegates are: LaSallian Christian Brother Javier Hansen, a religion teacher at Cathedral High School in El Paso, Texas; Nick Lopez, director of campus ministry for the University of Dallas; and Katie Prejean-McGrady, a wife, new mother, youth minister, and a popular speaker from the Diocese of Lake Charles, Louisiana. Last October, Pope Francis invited Christian and non-Christian young people from around the world to a meeting in preparation for this October’s Synod of Bishops, which will have as its theme: “Young people, faith and vocational discernment.” “Through this journey, the church wants to listen to the voices, the sensibilities, the faith as well as the doubts and criticisms of young people. We must listen to young people,” Pope Francis said in announcing the pre-synod gathering, set for March 19-25. 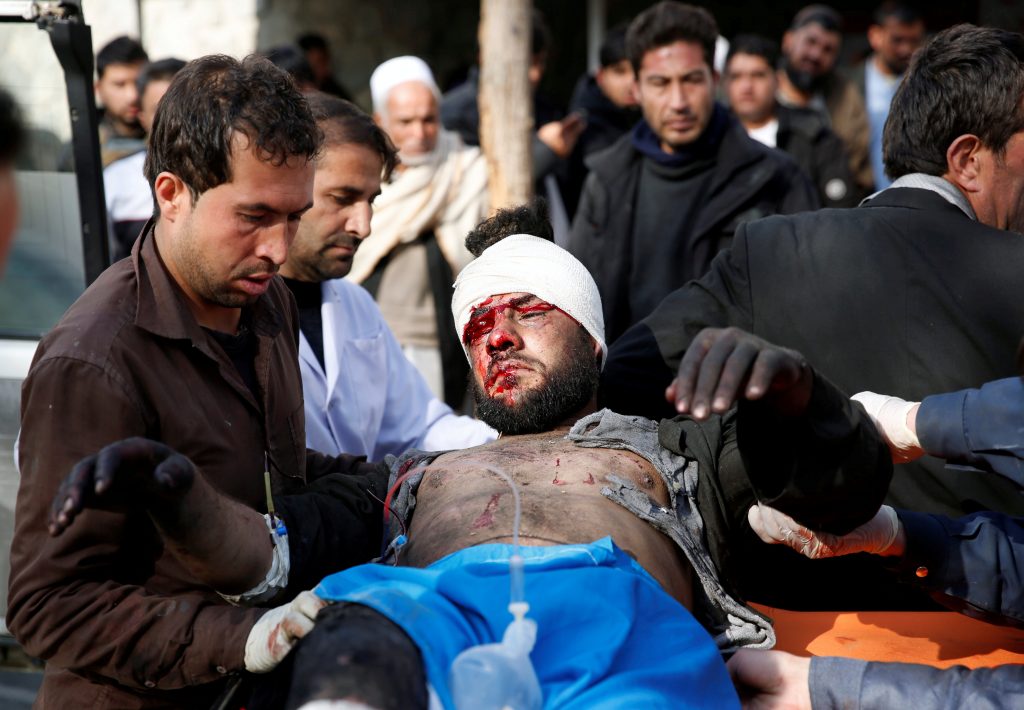 An injured man receives medical assistance after a Jan. 27 blast in Kabul, Afghanistan. An attacker driving an ambulance packed with explosives detonated them in the Afghan capital, leaving at least 95 people dead and nearly 200 others injured, Afghan officials said. (CNS photo/Mohammad Ismail, Reuters)