VATICAN CITY (CNS) — Pope Francis advanced the sainthood cause of Bishop Ovide Charlebois — a Canadian Missionary Oblate of Mary Immaculate who ministered to First Nations peoples and migrant workers scattered throughout the vast, lake-covered province of Manitoba. The pope recognized the Quebec native, who lived from 1862 to 1933, as having lived the Christian virtues in a heroic way. The pope also recognized the martyrdom of Father Jan Franciszek Macha, a Polish priest who began his parish ministry when the Nazis invaded Poland and was imprisoned and murdered by its elite force, the SS, despite his mother’s efforts to secure a pardon from Adolf Hitler. The pope also formally recognized the martyrdom of 16 victims of the Spanish Civil War and advanced the causes of eight other men and women. During a meeting Nov. 28 with Cardinal Angelo Becciu, prefect of the Congregation for Saints’ Causes, the pope signed the decree approving the heroic virtues of Bishop Charlebois, making him “venerable.” Before he can be beatified, the Vatican must recognize that a miracle has occurred through his intercession.

WASHINGTON (CNS) — Most Americans support life imprisonment over the death penalty, according to a Gallup poll released Nov. 24, revealing a shift in the majority opinion on this issue for the first time in 34 years.The poll, based on results from telephone interviews conducted October 14-31 with a random sample of 1,526 adults in the U.S., showed 60% prefer that convicted murders receive a sentence of life imprisonment while 36% said capital punishment would be better. This view marks a shift in Americans’ opinion over the past two decades. In the 1980s and 1990s, the majority opinion leaned toward the death penalty. The survey is also just the second time more people said they thought life in prison was a better punishment than the death penalty which they did by 1 percentage point in 2007 — 48% favoring life in prison to 47% favoring the death penalty. The current poll, with a margin of sampling error of plus or minus 3 percentage points, breaks down respondents by age, sex and party affiliation. Within these groups there were differing opinions: Women showed stronger support for life in prison (66 %) than men (53 %). Younger people were also more likely to show support for life in prison (68 %) than older people (57%). Along party lines: 58% of Republicans supported the death penalty over 38 % saying life in prison was the better option and 79% of Democrats preferred life in prison over 19% who preferred the death penalty be administered.

VATICAN CITY (CNS) — As Advent approached, Pope Francis gave a small fragment of Jesus’ crib back to Catholics in the Holy Land. At the Basilica of St. Mary Major in Rome Nov. 22, experts from the Vatican Museums extracted a small fragment from the relic of what has been venerated as Jesus’ manger. The relic, given to the Vatican in the seventh century, has been kept in a chapel under the basilica’s main altar. Pope Francis gave the relic fragment to the Franciscan Custody of the Holy Land, which oversees the main churches and shrines associated with the birth, ministry, death and resurrection of Jesus. Describing the fragment as “a small piece of the precious relic of the Holy Crib of the Child Jesus,” the Franciscans said it arrived in Jerusalem Nov. 29 and was present during a Mass celebrated by the nuncio, Archbishop Leopoldo Girelli, in the chapel of Our Lady of Peace at the Notre Dame Center.

Duluth bishop dies after heart attack; he was ‘greatly loved’ by all

ST. PAUL, Minn. (CNS) — Bishop Paul D. Sirba of Duluth, Minnesota, died at Essentia Health-St. Mary’s Medical Center in Duluth Dec. 1. He was 59. According to a statement from the diocese’s vicar general, Father James Bissonette, Bishop Sirba suffered cardiac arrest at St. Rose Catholic Church in Proctor and was rushed to the medical center where lifesaving measures were unsuccessful. He died shortly after 9 a.m. He received last rites from Father John Petrich, a hospital chaplain. “Words do not adequately express our sorrow at this sudden loss of our shepherd,” Father Bissonette said. “We have great hope and faith in Bishop Sirba’s resurrection to new life, and have confident assurance that he will hear the words of our Lord: ‘Well done, good and faithful servant, enter in the joy of your Master.’” After studying at the St. Paul Seminary in St. Paul, Paul David Sirba was ordained a priest for the Archdiocese of St. Paul and Minneapolis in 1986. He was named vicar general and moderator of the curia for the archdiocese in July 2009. Pope Benedict XVI appointed him bishop of Duluth and he was ordained a bishop in December 2009. He would have celebrated his 10th anniversary as a bishop Dec. 14.

New book on the rosary highlights St. John Paul II’s devotion to it

WASHINGTON (CNS) — If the use of the rosary as a devotion fell off at some point in the past, that’s not the case now, according to Gretchen R. Crowe, Our Sunday Visitor’s editorial director for periodicals. Under St. John Paul II, “we saw a real resurgence in praying the rosary,” said Crowe, author of “Praying the Rosary With St. John Paul II.” “He had such a great devotion to this Marian prayer that he inspired an entire generation of Catholics to come back to the rosary.” Crowe added. “I think there’s a great power to the rosary, a great devotion to the rosary. I think John Paul exemplified that. I want to do, and try, everything I can, to help people reclaim that great gift of the rosary,” she told Catholic News Service in a Nov. 26 phone interview from Our Sunday Visitor’s offices in Huntington, Indiana. The book, published Oct. 4, includes chapters for each set of mysteries — Joyful, Sorrowful, Glorious and Luminous, the last developed by the Polish-born pope — and each mystery contains a biographical note about St. John Paul as well as words from his writings or speeches. It’s Crowe’s second book on the rosary. Her first — “Why the Rosary, Why Now?”— came out in 2017. Both are published by Our Sunday Visitor.

WILMETTE, Ill. (CNS) — Hate speech must be stopped “in its tracks,” Chicago Cardinal Blase J. Cupich said in remarks during an interfaith dialogue at Loyola Academy in the Chicago suburb of Wilmette. The cardinal joined Holocaust survivor Fritzie Fritzshall and Chicago ABC7 news anchor Alan Krashesky in talking about their July visit to Auschwitz, the concentration camp operated by the Nazis in occupied Poland, and to make the point that the horror of the Holocaust started with hateful rhetoric. During their visit, Fritzshall, president of the Illinois Holocaust Museum and Education Center, asked Cardinal Cupich as a religious man, a man of God, how such things could happen. At the time, the cardinal had no answer. About a month later, he wrote a column titled “Words Matter,” published July 28 in the Chicago Catholic, the archdiocesan news outlet. It took some time for him to formulate his response, Cardinal Cupich told over 800 people who attended the mid-November dialogue in Wilmette. “I reflected on it, and there is an answer,” Cardinal Cupich said. “It happens in the human heart when we begin to criticize people, marginalize them, and then eventually call them ‘other,’ ‘alien,’ to ourselves.” 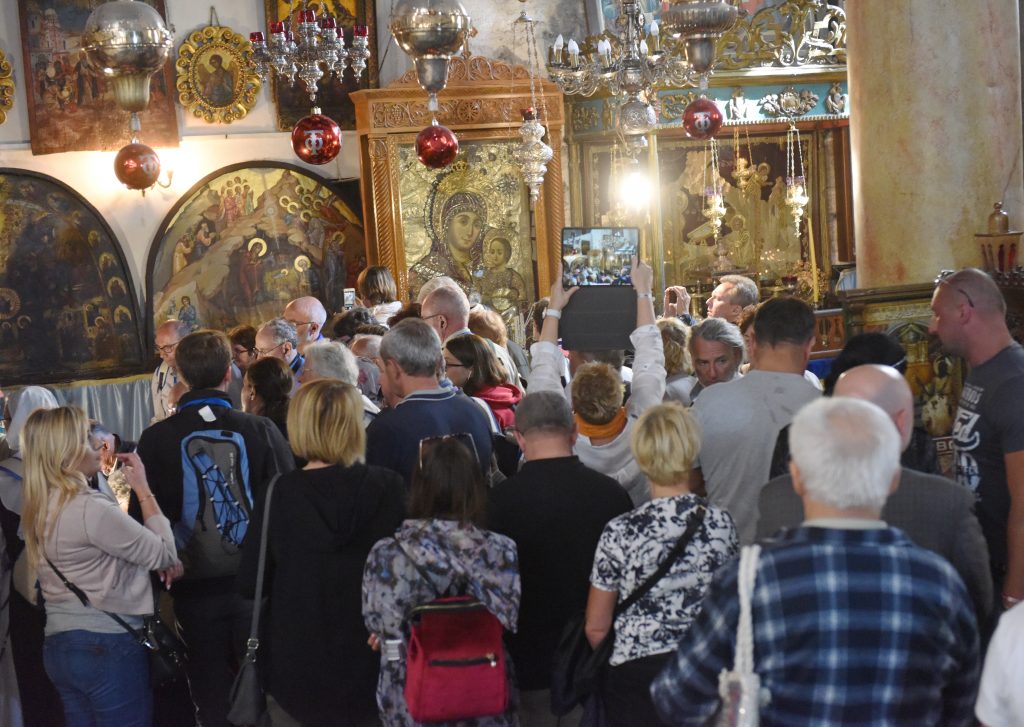 Visitors stand in line in the Church of Nativity Dec. 1, 2019, in Bethlehem, West Bank. Because of a large number of visitors, the church, which is built on what is believed to be the site where Jesus was born, has extended its visiting hours. (CNS photo/Debbie Hill)