Pope: Discrimination against people with disabilities must end

VATICAN CITY (CNS) — The Catholic Church must be a home for all, especially for people with disabilities who continue to face discrimination in the world and in the Church, Pope Francis said. In a message for the Dec. 3 celebration of the U.N.’s International Day of Persons with Disabilities, the pope said that although Church teaching is clear, too many men, women and children with disabilities lack spiritual care, which is “the worst form of discrimination.” “Discrimination continues to be all too present at various levels of society; it feeds on prejudice, ignorance and a culture that finds it hard to appreciate the inestimable value of each person,” he wrote in the message, which was published Nov. 25. Nevertheless, he said, baptism makes all men and women “full-fledged” members of the Church “so that all of us, without exclusion or discrimination, can say: ‘I am the church!’” he wrote. “The church is truly your home,” the pope told people with disabilities. “We, all of us together, are the church, because Jesus chose to be our friend.” The U.N. theme for the 2021 celebration of the international day is “Leadership and participation of persons with disabilities toward an inclusive, accessible and sustainable post-COVID-19 world.”

BALTIMORE (CNS) — A funeral Mass was offered Nov. 23 at St. Peter Claver Church in West Baltimore for Beverly A. Carroll, a social justice advocate who spent her life raising her voice for African American Catholics in the Archdiocese of Baltimore, the United States and the world. Carroll, the founding director of the U.S. Conference of Catholic Bishops’ Secretariat for Black Catholics, died Nov. 13. She was 75. Bishop John H. Ricard, a former auxiliary bishop of Baltimore and current superior general of the Baltimore-based Josephites, celebrated the Mass for his friend. Carroll worked for many years with Bishop Ricard, who also is the retired bishop of Pensacola-Tallahassee. “She was a great advocate for the community, for the church, for African Americans in the Church,” said Josephite Father Ray P. Bomberger, pastor of St. Peter Claver Parish, to which Carroll belonged her whole life. “She was interested in the Church, the people of the Church, what was going on, (and) how we could do it better,” he said. Father Bomberger praised Carroll’s devotion to her Church, both in her home community and around the country, as well as her interest in education and social justice. Carroll was a lifelong parishioner of St. Peter Claver, where she served as a corporator and parish council member.

The lonely can find an ‘ally’ in St. Joseph, pope says at audience

VATICAN CITY (CNS) — As the guardian of Jesus and Mary, St. Joseph’s reassuring presence is an example for Christians who are called to care for the lonely and those who struggle in their lives, Pope Francis said. In a society where relationships are constantly in flux, St. Joseph’s life and example give “a clear indication of the importance of human bonds,” the pope said during his weekly general audience Nov. 24. “Joseph, with his life, seems to want to tell us that we are always called to feel that we are the guardians of our brothers and sisters, the custodians of those placed close to us, of those whom the Lord entrusts to us through the circumstances of life,” he said. Before the general audience, the pope went to St. Peter’s Basilica to meet with several large groups of pilgrims unable to enter the Paul VI audience hall due to their numbers, including a group led by the Vincentian Fathers who were in Rome to commemorate the feast of Our Lady of the Miraculous Medal. According to a communique released by the Vincentians, the meeting was the “culmination and the continuation” of a yearlong Italian pilgrimage with a statue of Mary the pope blessed last year to mark the 190th anniversary of the Marian apparitions to St. Catherine Labouré.

WAUKESHA, Wis. (CNS) — Church leaders and parishes offered prayers for those who died and dozens more who were injured, including a Catholic priest, church parishioners and Catholic school students, when an SUV plowed through spectators watching a Christmas parade. “Our prayers are with the people who have been injured and killed during the tragic incident in Waukesha,” Sandra Peterson, communication director for the Archdiocese of Milwaukee, said in a statement posted on the archdiocesan website hours after the incident occurred the evening of Nov. 21. Waukesha is about 20 miles west of Milwaukee and is in the archdiocese. “Among the injured are one of our Catholic priests, as well as multiple parishioners and Waukesha Catholic school children,” Peterson said. Please join us in prayer for all those involved, their families, and those who are traumatized from witnessing the horrible scene.” A post early Nov. 22 on the Facebook page of the Catholic Community of Waukesha, a group of four parishes, said church leaders were monitoring “the impact of yesterday’s tragic event” and ministering to injured parishioners as well as those who attended the parade but were uninjured. “It is in our most difficult hours that we, as a community, turn to our Lord for refuge, strength and love,” the post said.

WASHINGTON (CNS) — Science education aimed to interest Catholic high school students can be wonderfully informal. Peter Dodson, a paleontologist at the University of Pennsylvania, introduced himself at lunch at The Catholic University of America by plopping down a resin replica of a dinosaur skull. “Dug up the original myself in northwest China!” he announced. Karin Öberg, a professor of astronomy at Harvard University, who was lecturing on cosmology and extraterrestrial life, found herself beset by questions about whether alien life exists on other planets. She took it in stride: “Maybe they’re just looking at us with wonder and curiosity (and asking) “What’s wrong with you?” she speculated. The first St. Albert Initiative, sponsored by the Society of Catholic Scientists, drew more than 100 high school students and educators. It was co-sponsored by the Science and Religion Initiative of the McGrath Institute for Church Life and the Lumen Christi Institute, with funding from the John Templeton Foundation. It is named after St. Albert the Great, bishop, scientist, philosopher, theologian, teacher, and patron saint of natural science and scientists.

NCYC presents a positive vision of the priesthood for Catholic youths

INDIANAPOLIS (CNS) — “Follow me to arm-wrestle a seminarian! See if you can beat a man who receives Communion every day!” Holding a chalk board with “Arm Wrestle a Seminarian” written on it, seminarian Samuel Hansen barked his invitation while walking through the halls of the Indiana Convention Center Nov. 20, the final day of the National Catholic Youth Conference. “It was incredibly fun,” said Hansen, a senior at Bishop Simon Bruté College Seminary and a member of St. Roch Parish, both in Indianapolis. “Just walking with the sign made a lot of people laugh. I felt like a ballpark food salesman. But it energized the convention center quite a bit.” In response to Hansen’s hawking, a steady group of challengers gathered around a table promoting vocations to the diocesan priesthood that had earlier attracted fewer visitors when the seminarians manning it waited for NCYC participants to come to them on their own. As lighthearted and winsome as his strategy to attract attention was, Hansen saw it as following in the tradition of the saints. St. John Bosco, for example, did sleight-of-hand tricks and juggling acts for kids in his village to get them to listen to his catechesis lesson. The NCYC always includes a thematic area made up of villages, or venues, in the convention hall that have traditional exhibits as well as interactive educational and recreational activities for attendees. “The saints stepped out of line and took extraordinary actions to inspire others,” Hansen told The Criterion, newspaper of the Archdiocese of Indianapolis. 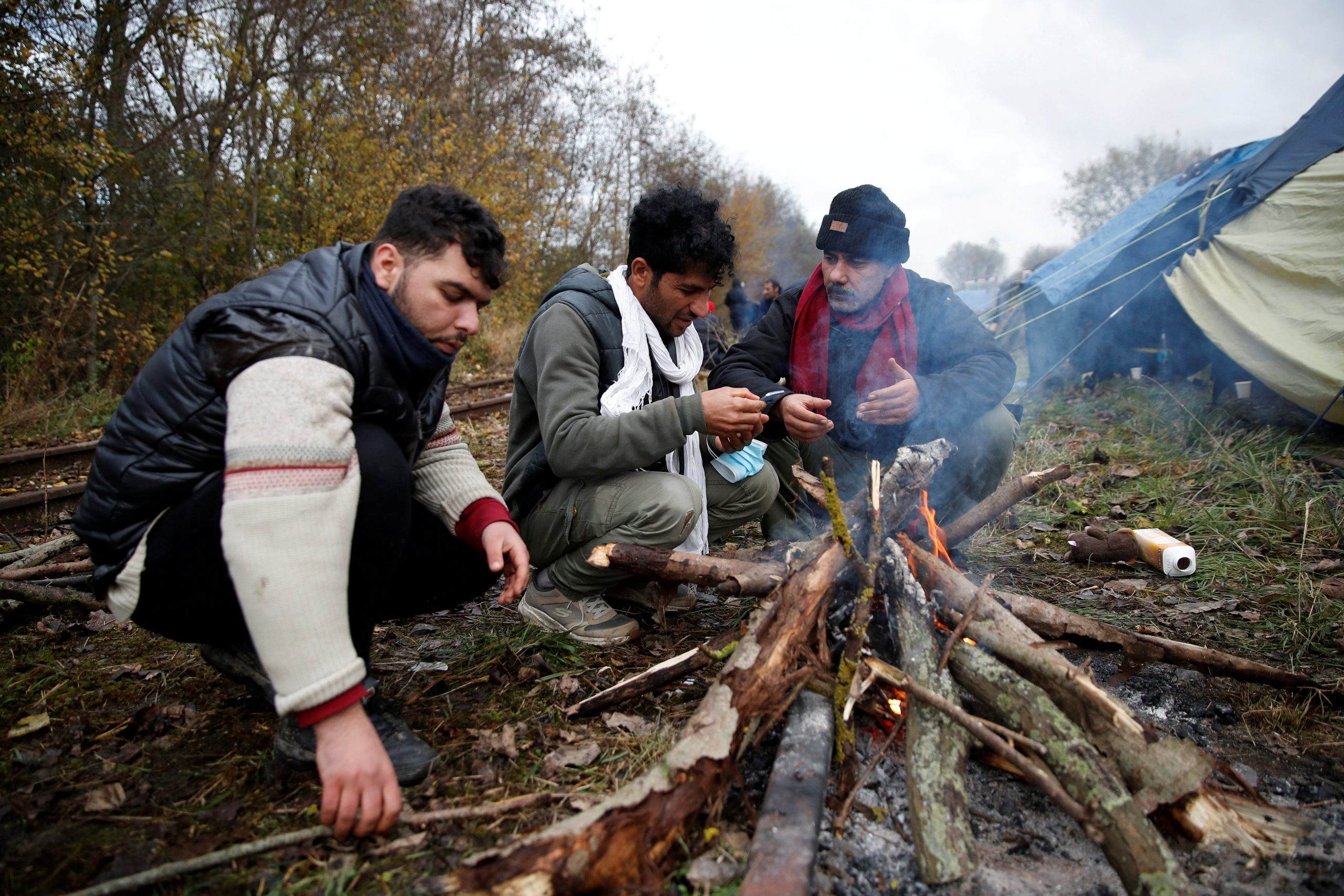 Migrants sit near wood fire at a makeshift migrant camp at Loon Beach in Dunkirk, France, Nov. 25, 2021, the day after 27 migrants died when their dinghy deflated as they attempted to cross the English Channel. Pope Francis asked visitors in St. Peter’s Square to join him for a moment of silent prayer for migrants, especially those who recently drowned in the English Channel and in the Mediterranean and those who are freezing on the border of Belarus and Poland. (CNS photo/Johanna Geron, Reuters)