VATICAN CITY (CNS) — Responding to 11 questions it said had been raised about Pope Francis’ document restricting celebrations of the pre-Vatican II Mass, the Congregation for Divine Worship and the Sacraments offered a few concessions to bishops but insisted the entire Latin-rite Catholic Church must move toward celebrating only one form of the Mass and sacraments. “It is sad to see how the deepest bond of unity, the sharing in the one bread broken which is his body offered so that all may be one, becomes a cause for division,” wrote Archbishop Arthur Roche, prefect of the congregation, in a document published Dec. 18. In a formal “responsa ad dubia” — response to questions — Archbishop Roche said, “It is the duty of the bishops, cum Petro et sub Petro (with and under Peter, the pope), to safeguard communion, which, as the apostle Paul reminds us, is a necessary condition for being able to participate at the eucharistic table.” Writing to the presidents of bishops’ conferences, the archbishop said, “As pastors we must not lend ourselves to sterile polemics, capable only of creating division, in which the ritual itself is often exploited by ideological viewpoints.”

WASHINGTON (CNS) — The percentage of Catholics in the U.S. population in 2021 held steady at 21% in the latest Pew Research Center survey, issued Dec. 14. The percentage of Protestants, however, dropped, while the percentage of “nones” — those who profess no particular denominational attachment — continued to rise, said the report, “About Three-in-Ten U.S. Adults Are Now Religiously Unaffiliated.” The survey results also indicate the proportion of Christians in the U.S. population continues to slide. A decade ago, they constituted 75%, or three out of every four Americans. In the new survey, that percentage is down to 63%, or five out of every eight Americans. “Christians now outnumber religious ‘nones’ by a ratio of a little more than 2-to-1,” the report said. In 2007, when Pew began asking its current question about religious identity, the ratio was almost 5-to-1, or 78% vs. 16%. Since 2007, Protestantism has dwindled from 52% of all Americans to 40%, not quite twice the percentage of Catholics today. Within Protestantism, the percentage of those adults who profess evangelical or “born again” Christianity has shrunk by 6%; the number of those who are not evangelical or “born again” also has shrunk by 6%.

DUBLIN (CNS) — The U.K. Supreme Court ruled that police in Northern Ireland were wrong not to investigate allegations that 14 Catholic men were tortured while in custody in the early 1970s. The men — known as the “hooded men,” because while they were being detained their heads were hooded by the security forces — were arrested and held without charge or trial with hundreds of other Catholics in a campaign the British government in the region described as internment. The men have been campaigning for the past 50 years to have a police investigation into their treatment. The Police Service of Northern Ireland refused to investigate in 2014, prompting the court case. The judges ruled Dec. 15 that the decision by the police was “irrational.” The court also said the men’s treatment was “deplorable” and was a “deliberate policy” of the British government rather than the actions of rogue agents. Operation Demetrius was launched by the British Army in Northern Ireland in August 1971. It involved the mass arrest and internment of people the authorities said they suspected of being involved with paramilitary organizations.

VATICAN CITY (CNS) — Pope Francis established a new Vatican foundation that will promote initiatives based on the principles set out in his encyclical “Fratelli Tutti, on Fraternity and Social Friendship.” In a decree published by the Vatican Dec. 15, the pope said he would “gladly accede” to the request of the Fabbrica di San Pietro, the Vatican office charged with the maintenance and upkeep of St. Peter’s Basilica, “to establish a foundation of religion and worship intended to collaborate in spreading the principles set forth” in his encyclical. The “Fratelli Tutti” Foundation, he said, will “encourage initiatives linked to spirituality, art, education and dialogue with the world, around St. Peter’s Basilica and in the embrace of its colonnade.” The decree, also known as a chirograph, was signed by the pope Dec. 8. According to its statutes, the foundation, which will be headed by Cardinal Mauro Gambetti, archpriest of St. Peter’s Basilica, will “support and plan” the promotion of art and faith.

VATICAN CITY (CNS) — The absence of any words attributed to St. Joseph in the Gospels speaks volumes about the importance of silence, Pope Francis said. St. Joseph’s silence was “not mutism,” but a quality that allowed him to listen to the word and will of the Holy Spirit, the pope said during his weekly general audience Dec. 15. “This is why we must learn from Joseph to cultivate silence — that space of interiority in our days in which we give the Spirit the opportunity to regenerate us, to console us, to correct us,” he said. During his audience in the Vatican’s Paul VI hall, Pope Francis continued his series of talks on St. Joseph, reflecting on his silence which is “an important personal aspect” that even Christ incorporated in his own life and ministry. “Jesus was raised in this ‘school,’ in the house of Nazareth, with the daily example of Mary and Joseph,” the pope explained. “And it is not surprising that he himself sought spaces of silence in his days and invited his disciples to have such an experience.”

Catholic priest leads campaign against hostility toward poor in Brazil

SÃO PAULO (CNS) — Calling it a humanitarian crisis, a Catholic priest who works with the homeless in São Paulo has been on a campaign against fear of poor people. His crusade has attracted the attention of federal lawmakers, who may approve a bill prohibiting architecture hostile to homeless people in public areas across the country. In November, a lower house commission approved a bill, dubbed “Father Julio Lancellotti,” that prohibits the use of hostile construction techniques and physical equipment to distance and restrict the use of public spaces by homeless people. For Father Lancellotti, the priest known as Father of the Poor for his work with the homeless, unfriendly architecture toward the homeless and campaigns against the donation of alms are spreading across the country. “This aggressiveness toward homeless people serves to hide the fact that social programs don’t work,” the priest said in a recent TV interview. He said he has seen sharp, architectural obstacles being placed in public areas to prevent the homeless from staying there and even sprinkler systems employed to deter people from sleeping underneath marquees. As for the campaigns against giving money to those panhandling on the streets, the priest says the majority of poor people do not have a choice, “If begging were profitable, there would be a lot of people living off it.”

MADRID (CNS) — Catholic priests on a Spanish island devastated by a volcanic eruption have pledged to celebrate Christmas “with open arms,” despite widespread destruction. “Many stories have been told about this volcano, notably of those who’ve lost everything — but there is another story, concerning action by the church,” Father Domingo Guerra, rector of Holy Family Parish on La Palma in the Canary Islands, told the Spanish Catholic weekly Alfa y Omega Dec. 16. “Although our church lies at the foot of the volcano, it hasn’t closed for a single moment since the eruption began and is now preparing for the birth of Jesus, reflecting the reality we’re living through.” Four days earlier, Bishop Bernardo Álvarez Afonso, a La Palma native, celebrated Mass at Holy Family Parish, and it was broadcast on national TV. Two Nativity scenes made from volcano lava were unveiled Dec. 13 at the church. Father Guerra said the church at Los Llanos de Aridane had sheltered geologists during the three-month eruption and offered a “refuge from dust” for hundreds of journalists covering the disaster. Another priest told Alfa y Omega the wrecking of parish properties by the lava flow had forced Catholic congregations into smaller spaces, but added that the church was “preparing for a Christmas marked by drama as well as hope.” 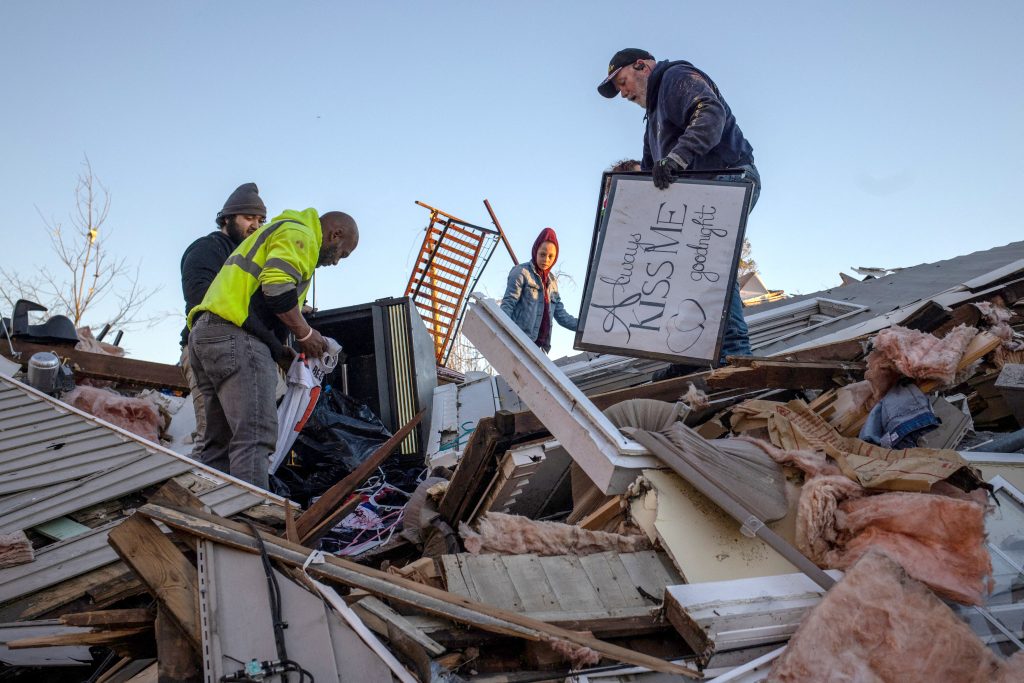 Members of the Weatherbee family salvage their belongings from their destroyed home in Mayfield, Ky., Dec. 13, 2021, in the aftermath of a tornado that ripped through the town. (CNS photo/Adrees Latif, Reuters)