Pope Reveals He Prepared Resignation Letter in Case of Impairment

VATICAN CITY (CNS) — Pope Francis said he wrote a resignation letter in 2013, his first year in office, to be used in case he became physically or mentally impaired and unable to fulfill the duties of the papacy. In an interview published on Dec. 18, the day after his 86th birthday, Pope Francis said that during the time that Cardinal Tarcisio Bertone was Vatican Secretary of State, a position he left in October of 2013, he gave a resignation letter to the cardinal. “I signed it and said, ‘If I should become impaired for medical reasons or whatever, here is my renunciation. Here you have it,’” the pope told the Spanish newspaper ABC. Pope Francis joked that now that the letter’s existence has been made public, someone will go after Cardinal Bertone and say, “Give me that piece of paper!” But he also said he was certain Cardinal Bertone gave it to Cardinal Pietro Parolin, who succeeded him as Secretary of State. The interviewer also noted that Pope Francis had named several women as secretaries or undersecretaries of Vatican offices, but that he had not appointed a woman to lead a Vatican dicastery, although his reform of the Roman Curia says it is possible for a layperson to head a dicastery. Pope Francis responded that he has been thinking of appointing a woman to lead “a dicastery where there will be a vacancy in two years.” He did not say what office that was. “There is nothing to prevent a woman from guiding a dicastery in which a layperson can be a prefect,” the pope said.

AMMAN, Jordan (CNS) — Jordan began Christmas celebrations by unveiling a project that could attract one million pilgrims annually to the officially recognized site of Jesus’ baptism on the east bank of the Jordan River. An area adjacent to Bethany Beyond the Jordan, as mentioned in the New Testament, will be developed to allow Christian pilgrims and visitors to spend more quality time at the Baptism Site, as it is called, “to learn, appreciate, and renew their journey of faith and spirituality.” More than 25 years ago, excavations began on the east bank of the Jordan River and uncovered the Baptism Site. The area is full of the ruins of ancient Roman and Byzantine churches and chapels, a monastery, hermit caves, and baptism pools, destroyed by earthquakes and the river’s flooding. Through the centuries, the area had commemorated the site of Jesus’ baptism by John the Baptist. Now, modern-day visitors can spend only a couple of hours there due to a lack of accommodations and services. A $300 million six-phased building project to establish a biblical tourist village located adjacent to this UNESCO-designated World Heritage Site seeks to address that, while respecting the spiritual integrity of the holy site itself. The goal is to see this possibly completed for the 2,000th anniversary of Christ’s baptism. Catholic and other Christian leaders welcomed Jordan’s plans to transform the Baptism Site into one of the world’s leading Christian pilgrimage and spiritual destinations.

VATICAN CITY (CNS) — Pope Francis recognized the martyrdom of members of a Polish family who were sheltering a Jewish family during World War II, and, for the first time, advanced the sainthood cause of a candidate under the category of heroically offering his life out of loving service to others. And following centuries of church debate, the pope also advanced the sainthood cause of his confrere, Jesuit Father Matteo Ricci, the 16th-century missionary to China. During a meeting on Dec. 17 with Cardinal Marcello Semeraro, prefect of the Dicastery for the Causes of Saints, the pope also signed decrees advancing the sainthood causes of a Uruguayan bishop, 12 priests and religious men and women, and one laywoman. Józef and Wiktoria Ulma and their seven children, including their unborn child, were killed by the Nazis along with the Jews they had taken in. The recognition of martyrdom clears the way for all nine members of the Ulma family to be beatified. The cause of Franz De Castro Holzwarth, a Brazilian layman born in 1942, is, according to the dicastery website, the first sainthood cause to be advanced according to a new pathway approved by Pope Francis in 2017, that of offering one’s life in “an extreme act of charity.” Father Ricci, who was born in 1552 in Macerata, in central Italy, spent 28 years evangelizing, absorbing Chinese culture, and bringing Western science to the faraway Asian continent.

Some Christians in Myanmar Prepare to Spend Second Christmas in Camps

YANGON, Myanmar (CNS) — A Christmas of darkness, silence, and fear awaits thousands of Christians in camps for internally displaced persons in Myanmar, where carols, decorations, and illuminations are banned because of ongoing conflicts. The sounds of gunfire, fighter jets, and artillery shelling have replaced those of carols and celebrations in predominantly Christian Kachin, Kayah, Karen, and Chin states, reported ucanews.com. Thousands of Christians have been forced to take refuge in churches, makeshift camps, and in forests following military attacks against civilians. Ucanews.com talked to some people in the camps, but, at their request, changed their names to protect their identities. Ucanews.com reported that Josephine Pho Mu, 42, said this is the second time since 1988 she has had to flee her home in Kayah state. “I thought we would be temporarily displaced and go back home. But we have been away from home and sheltering at this camp for 19 months,” said Pho Mu, who has taken refuge at a church-run camp in Loikaw, capital of Kayah state, after leaving her village in Demodo township in May of 2021. The mother of three said this will be her second Christmas in the camp.

WASHINGTON (CNS) — Caleb Williams, the star quarterback at the University of Southern California who won the Heisman Trophy on Dec. 10, earlier made his mark at two Washington-area Catholic schools he attended for middle school and high school. Before graduating from Gonzaga College High School in Washington, D.C. in 2021, Williams attended St. Pius X Regional School in Bowie, Maryland, a D.C. suburb. “We love Caleb!” a group of purple-clad Gonzaga students chanted during a Heisman Trophy watch party at the Jesuit boys’ high school. Williams had just become the first Washington-area native to win the Heisman Trophy. Four years earlier in November of 2018, Williams, as Gonzaga’s sophomore quarterback, had lifted the Eagles to their first Washington Catholic Athletic Conference football title since 2002 with an improbable 46-43 win over DeMatha. The stunning game included a last-second 53-yard “Hail Mary” touchdown pass from Williams to leaping wide receiver John Marshall to seal the victory at The Catholic University of America’s Cardinal Stadium. After a yearlong stay at the University of Oklahoma, Williams transferred to USC. This season, he threw for more than 4,000 yards with a 66 percent pass completion rate, 37 touchdowns, and only four interceptions in leading the Trojans to a No. 8 AP ranking and an 11-2 record. Debbie Corradini, a resource teacher at St. Pius X Regional School, remembers Williams for his qualities off the gridiron from when he attended St. Pius in the seventh and eighth grade. “We taught him, but in a lot of ways, he taught us (more) about being hardworking, kind, and humble,” she told the Catholic Standard, Washington’s archdiocesan newspaper.

WASHINGTON, D.C. (CNS) — Catholic and other opponents of the death penalty applauded Oregon Gov. Kate Brown’s decision to commute the sentences of the state’s 17 inmates on death row, changing their sentences to life in prison without the possibility of parole. The decision, effective Dec. 14, was announced the previous day by the Democratic governor, who said she was using her executive clemency powers in this decision, stressing that she has “long believed that justice is not advanced by taking a life, and the state should not be in the business of executing people, even if a terrible crime placed them in prison.” Archbishop Alexander K. Sample of Portland was pleased with the announcement and said his “prayer is that a recognition of the true value of human life will take deep root in the minds and hearts of all Oregonians.” Krisanne Vaillancourt Murphy, Executive Director of Catholic Mobilizing Network, similarly praised the decision and said she hopes “other state leaders across the nation and the federal government will follow (Brown’s) example in abandoning the antiquated, immoral, and unjust system of capital punishment. Today’s commutation action by Governor Brown further solidifies a growing rejection of capital punishment — not just in Oregon, but in states across the country,” she said in a Dec. 13 statement.

VATICAN CITY (CNS) — Celebrating Christmas is important and beautiful, Pope Francis said, but he asked people to spend less on their celebrations this year and donate the savings to help the people of Ukraine. As he has done at his general audiences since Russia invaded Ukraine in February, the pope asked pilgrims and visitors on Dec. 14 to express their “closeness to the martyred Ukrainian people, persevering in fervent prayer for these brothers and sisters of ours who are suffering so much. Brothers and sisters, I tell you, they are suffering so very, very much in Ukraine,” the pope said. “I want to draw your attention to Christmas, which is coming, and to the festivities,” he said. “It’s beautiful to celebrate Christmas and have parties, but let’s reduce the level of Christmas spending a bit; let’s have a simpler Christmas with more modest gifts.” And, the pope said, “let’s send what we save to the people of Ukraine, who are suffering so much.” People in the country are hungry and cold, he said. 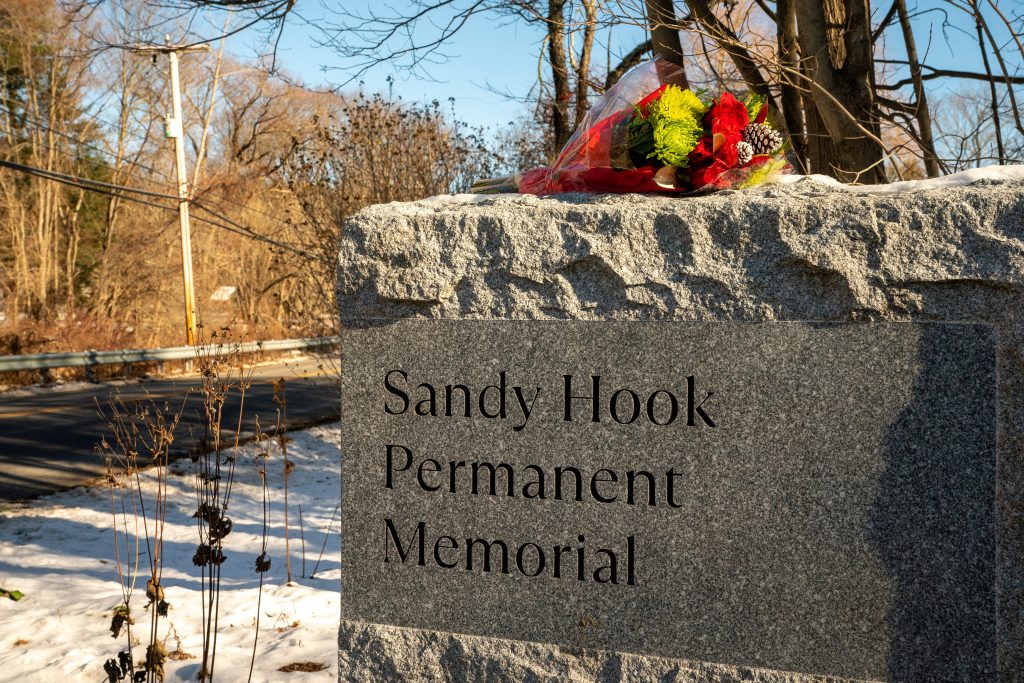 The entrance to the Sandy Hook Permanent Memorial in Newtown, Conn., is seen Dec. 14, 2022, the 10th anniversary of a mass shooting at Sandy Hook Elementary School. On Dec. 14, 2012, a young man shot and killed 26 people at the nearby school. Twenty of the victims were children in first grade; the other six were adult staff members. (CNS photo/David Delgado, Reuters)