Catholics in California join effort to consecrate state to Mary

SAN DIEGO (CNS) — An effort is underway to consecrate California to the Immaculate Heart of Mary, and all California Catholics are invited to take part. Many will gather in prayer from noon-2 p.m. local time Dec. 8, the feast of the Immaculate Conception, at several participating parishes statewide. The basic schedule calls for Mass to be celebrated at noon, followed by a walk to a designated location where the rosary and special consecration prayers will be recited. The organizers of this statewide effort are seeking Mary’s intercession to combat several moral evils they see as prevalent in the state. The effort has a website, www.consecratecalifornia.com, which lists parishes that are signing on to participate in the campaign. Those unable to make it to a participating church are encouraged to recite the rosary and prayers provided on the website either on their own or as a group. One of the prayers available on the website includes a request “to be spared the just punishment for our souls that our state deserves from killing our unborn, sick, elderly, unwanted, and for the violence, sex abuse, drugs, alcoholism and sex trafficking.”

Helping others can change the world, pope tells young people

VATICAN CITY (CNS) — In a video message to young men and women around the world, Pope Francis called on them to provoke an uprising of change by serving others. In helping those who are suffering, both young believers and nonbelievers can find “a strength that can change the world,” the pope said in a video message to youths for the upcoming World Youth Day in Panama. “It is a revolution that can overturn the powerful forces at work in our world. It is the ‘revolution’ of service,” he said in the message released by the Vatican Nov. 21. The theme for the World Youth Day celebrations, which will take place Jan. 22-27, is taken from the Gospel of St. Luke, “May it be done to me according to your word.” In his message, the pope said those words uttered by Mary during the Annunciation are “the positive reply of one who understands the secret of vocation: to go beyond oneself and place oneself at the service of others.”

CHICAGO (CNS) — A gunman opened fire at a Chicago Catholic hospital Nov. 19, setting off a frantic scene that ended with three victims killed and the assailant dead, police said. The same day in suburban St. Louis, another gunman entered a Catholic goods store, sexually assaulted several women and shot one of them. The woman later died, police said. The incidents shocked Catholic leaders, including Chicago Cardinal Blase J. Cupich and Cardinal Daniel N. DiNardo of Galveston-Houston, president of the U.S. Conference of Catholic Bishops, and they offered words of condolence to the victims and their families. The Chicago incident occurred at Mercy Hospital and Medical Center on the city’s South Side. The dead included a young police officer and two hospital employees, among them a doctor and a pharmacy resident. Police said the gunman also died, but that they were unsure if he turned the gun on himself or was shot by responding officers. In West St. Louis County, police were looking for a gunman Nov. 20, a day after his attack on a Catholic Supply store. He shot one woman, 53, who died hours later, and sexually assaulted at least one other woman. The attack at the store in suburban Ballwin was apparently a random act. “Our hearts go out to the victims of this horrific tragedy at Catholic Supply,” St. Louis Archbishop Robert J. Carlson shared in a tweet.

Bishop Morlino dies; increasing vocations was one of his top priorities

MADISON, Wis. (CNS) — Bishop Robert C. Morlino, the fourth bishop of Madison, died Nov. 24 at St. Mary’s Hospital in Madison. He was 71. The bishop was undergoing planned medical tests when he suffered what doctors described as “a cardiac event” at the hospital and he never recovered. Funeral arrangements were pending. “All objective indicators point to the fact that Bishop Morlino accomplished what he set out to do in the diocese” after his Aug. 1, 2003, installation, the diocese said in a statement. Among his “three expressed priorities” was increasing “the number and quality of the men ordained to the diocesan priesthood,” it said. “Fostering greater priestly vocations” resulted in his ordination of 40 men to the priesthood during his tenure. Another 24 are currently in formation. He also instilled “a greater sense of reverence throughout the entire diocese, especially through our worship of God, celebrated in the holy sacrifice of the Mass,” the diocese said, and “made inroads” in challenging Catholic institutions in the diocese “to live out their professed faith in Jesus Christ, risen from the dead, through their ministry in the secular community.”

VATICAN CITY (CNS) — Antimicrobial resistance poses a “great challenge” to global public health and puts the most vulnerable in our society at risk, said Cardinal Peter Turkson, prefect of the Dicastery for Promoting Integral Human Development. “Our time is running out, and we must act to initiate and animate the necessary behavior change to strengthen awareness and action on infection prevention and control and (to) promote the appropriate stewardship of antimicrobials,” he said in a message for World Antibiotics Awareness Week. The World Health Organization says antibiotic resistance, also referred to as AMR, occurs when microbes, such as bacteria, become resistant to the drugs used to treat them. While antibiotics saves millions of lives and alleviate much illness and suffering, “the persistent overuse and misuse of antibiotics in human and animal health have encouraged the emergence and spread of AMR,” it said.

VATICAN CITY (CNS) — Pope Francis named U.S. Cardinal Blase J. Cupich of Chicago to be part of the organizing committee preparing for a meeting of the world’s bishops’ conferences and representatives of religious orders to address the abuse and protection of minors. The Feb. 21-24 Vatican meeting is not only “about keeping children safe from harm worldwide,” said Greg Burke, head of the Vatican press office, in a written statement Nov. 23. “Pope Francis wants Church leaders to have a full understanding of the devastating impact that clerical sexual abuse has on victims,” he said, soon after the Vatican announced the members of the preparatory committee. Together with Cardinal Cupich, the committee will include Cardinal Oswald Gracias of Mumbai, India; Archbishop Charles J. Scicluna of Malta; and Jesuit Father Hans Zollner, president of the Centre for the Protection of Minors at the Pontifical Gregorian University and a member of the Pontifical Commission for the Protection of Minors. The Pontifical Commission for the Protection of Minors, headed by Boston Cardinal Sean P. O’Malley, and some survivors of abuse by members of the clergy also will be involved in the preparatory work for the meeting, the Vatican said. “This a critical moment for the universal Church in addressing the sexual abuse crisis,” Cardinal O’Malley said, and the February meeting “will be an important moment for developing a clear path forward for dioceses around the world.”

LONDON (CNS) — The threat to religious freedom from Muslim fundamentalists is rapidly becoming a global phenomenon following the military defeat of Islamic State in Iraq and Syria, said a new report. Islamist extremists have increased violence in Europe, Africa and Southeast Asia corresponding to their loss of territory in the Middle East, said a report from Aid to the Church in Need, a Catholic charity helping persecuted Christians. The charity’s “Religious Freedom in the World 2018 Report,” published Nov. 22, noted that conditions for religious minorities in Iraq and Syria have improved so significantly over the past two years that many Christians and other refugees are beginning to return home. However, it said Islamic violence had intensified in such countries as Indonesia, Somalia, Niger, Libya and Pakistan. John Pontifex, editor-in-chief of the report, said since Islamic State was vanquished on the battlefields of Iraq and Syria, it has resurfaced elsewhere, “for example, in Africa, where a new front of Islamic fundamentalism, supported in part by Arab states, is erupting with devastating consequences for minorities, notably Christians.” 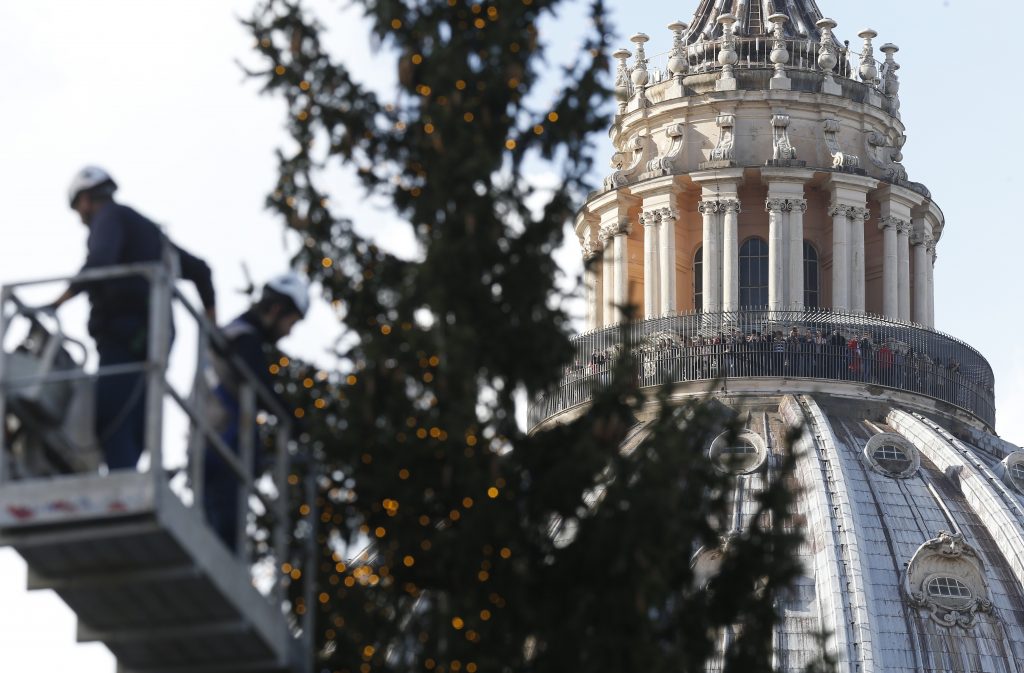 People look out from the dome of St. Peter’s Basilica as workers decorate the Christmas tree in St. Peter’s Square at the Vatican Nov. 26. The tree from the northern Italian region of Veneto will be lit Dec. 7. (CNS photo/Paul Haring)