Knights’ documentary on St. Joseph available to view for free

NEW HAVEN, Conn. (CNS) — The Knights of Columbus made its latest documentary, “St. Joseph: Our Spiritual Father,” available to view for free at kofc.org beginning Dec. 8 to coincide with the end of the Year of St. Joseph. “St. Joseph teaches us that we really find ourselves when we live for others,” said Patrick Kelly, supreme knight of the Knights of Columbus. “He models for each one of us the importance of prayer, obedience and courage in our lives. The Knights of Columbus is very pleased to offer this inspiring documentary for all to watch and to discover in St. Joseph a powerful example and intercessor,” he said in a Dec. 7 statement. Produced to increase devotion to the foster father of Jesus, protector of the Holy Family and patron of the Catholic Church, the film premiered on ABC affiliates across the United States this fall. After its six-week broadcast run, the Knights announced the film would be made available for viewing online. It features reenactments, interviews with scholars “and inspiring witness stories” that provide an opportunity to learn about Joseph from a historical perspective and show “how devotion to him can be life-changing,” the Knights said in a news release.

Restoration at Church of the Nativity shows what cooperation can do

BETHLEHEM, West Bank (CNS) — When restoration on the Church of the Nativity’s wooden beams and leaking roof began in 2013 with the blessing of the three custodial churches, everyone involved was aware of the historic significance of the venture. It was the first time in 540 years that any repair work was done on the church on the site where Jesus was born. But what the team of workers — including local Palestinian committees and engineers and international restoration experts — did not know was the true impact of the initial ecumenical cooperation. Historically the Franciscans, Greek Orthodox and Armenians jealously guarded their rights in the church, under the 1852 Status Quo agreement that regulates the ownership of spaces in various holy sites as well as the times and duration of religious liturgies. As recently as 2011, Greek Orthodox and Armenian monks came to blows over cleaning rights in a certain area in the church. But with the leaking of the roof endangering the ancient structure, all agreed to undertake the necessary work. And a new era began. “Along the way the three churches noticed the good results that were coming from the cooperation and that it would be good to continue,” said Khouloud Daibes, the new executive director of the Bethlehem Development Foundation, which has raised $2.6 million out of the $15 million needed for the restoration of the entire church. “At first it was just supposed to be the roof, but then we continued to do much, much more,” she said.

VATICAN CITY (CNS) — Dropping references to Christmas in favor of “winter holidays” in official European Union communications was an idea that was not meant to offend but did and could even push some Christians toward right-wing populist political parties, said Cardinal Jean-Claude Hollerich of Luxembourg. The cardinal, president of the Commission of the Bishops’ Conferences of the European Union, told reporters at the Vatican Dec. 10 that the best way to make Europe more inclusive for members of all religions “is not to put religion in the sphere of the private, but to give all religions access to the public space.” In late October, Helena Dalli, the EU equality commissioner, distributed a 30-page internal handbook for making official EU communications more inclusive. An Italian newspaper published excerpts in late November, setting off a firestorm of criticism, particularly over Dalli’s reminder that not all Europeans celebrate Christmas and that even those who do don’t all celebrate on the same day since some who follow the Julian calendar celebrate in January. Dalli withdrew the handbook in late November, promising to revise it. Still, Pope Francis was asked about it Dec. 6 during his news conference with reporters on his flight back to Rome from Greece. The idea of not talking about Christmas, he responded, is “an anachronism” reminiscent of the dictatorships of days gone by, including the communists.

WASHINGTON (CNS) — The Supreme Court said Dec. 10 that clinics can continue to challenge a Texas law that bans most abortions after six weeks of pregnancy but in the meantime the law would remain in effect. Eight justices said the challenge could go forward. Justice Clarence Thomas opposed it. Chief Justice John Roberts, writing separately, urged the U.S. District Court judge to act quickly in reviewing the law. “Given the ongoing chilling effect of the state law, the District Court should resolve this litigation and enter appropriate relief without delay,” he wrote. The Texas abortion law, signed by Republican Gov. Greg Abbott in May, went into effect Sept. 1. During oral arguments about it Nov. 1, the justices considered whether the Justice Department and state abortion clinics can even challenge the abortion law in federal court because of the way the law was set up with citizens’ enforcement. This was the third time the nation’s high court considered the Texas abortion law. On Sept. 1, it ruled against blocking it and on Oct. 22, it said the law would remain in effect before its expedited review Nov. 1. Jeanne Mancini, president of the March for Life Education and Defense Fund, said in reaction to the court’s Dec. 10 decision: “Today the court ruled on a procedural issue without addressing the merits of the case challenging the Texas Heartbeat Act.”

AUSTIN, Texas (CNS) — The Texas Catholic Conference of Bishops has asked President Joe Biden and Health and Human Services Secretary Xavier Becerra to end a stalemate between state officials and the federal agency overseeing Medicaid payments that is threatening health care for low-income Texans. Addressing what they described as “an urgent issue,” the prelates Dec. 3 sent the letters explaining that without an agreement covering reimbursements, “children, elderly, disabled residents and those living in poverty throughout our state risk losing access to critical care.” The reimbursements ended Sept. 1 when an agreement between Texas and the Centers for Medicare and Medicaid Services, or CMS, expired. The impasse “also jeopardizes $10 billion that historically has supported our state’s Medicaid system,” the bishops wrote. “Losing these funds in our poorest communities will fracture and devastate our safety net, incredibly, in the midst of a global pandemic that has already adversely affected the poor,” the letter said. The leaders of all 15 Texas archdioceses and dioceses and the Houston-based Personal Ordinariate of the Chair of St. Peter signed the letter in a sign of unified support for reinstating the health care support plan. 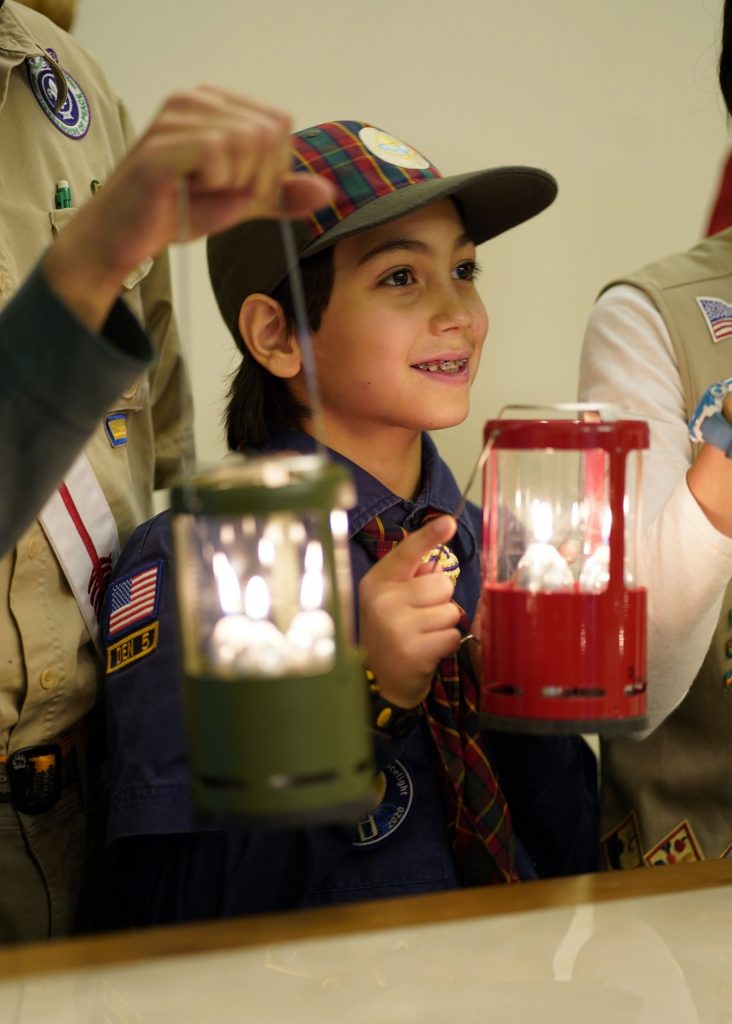 Cub Scout Jotham Andres, 9, poses with a lantern using a flame transferred from the International Peace Light during a welcoming ceremony following the Peace Light’s arrival at John F. Kennedy International Airport in Jamaica, N.Y., from Vienna Dec. 11, 2021. Boy and Girl Scout leaders, along with other volunteers, form a network to drive the flame — which originated in the grotto of the Church of the Nativity in Bethlehem, West Bank — to houses of worship, homes and other venues across North America. (CNS photo/Gregory A. Shemitz)